I decided this would be the morning to make the Plantain we had bought.
Mike had put the butter in the freezer and I needed it to fry the sliced plantain with sugar and cinnamon.
I proceeded to try to cut the butter but only succeeded in cutting into my finger.
Walking calmly to the bathroom I held my finger under the tap.
I asked Mike for some ice and though the cut wasn’t so bad, I started feeling nauseous.
Getting dizzy I stumbled to the bed as Mike looked for bands in my purse.
I think he asked where they were and what size was needed.
I remember nothing, which is strange because never before has blood (my own at least) really bothered me.
First time for everything I suppose.

Back to the kitchen to finish up the Plantain.
It’s a propane stove top so things are a tad trickier to fry without burning but they actually turned out pretty tasty 🙂

Ate them by the pool and then went for a swim across to the lawn chairs at the other end.

As I tried to bear the heat and get a tan, Michiel arranged a time with Tino for us to go try out zip-lining.
An iced tea with lime on the side was delivered to my chair, as well as “water to cool off with.”
Via hubby.

By then he had also started lunch preparations.
Thaw the burgers and barbecue the bacon how Bob had taught him 😉
Ate those and then started the drive to find our “canopy tour” in Montezuma.
We drove for almost an hour, manipulating the roads and signs, asked a local for directions and found it easy enough after that.

Once at the zipline place, you get your straps, helmets and gloves put on and a quick training demo before heading off.
Mike made me go first.
Thankfully it wasn’t scary at all.
It’s an interesting way to see things but some of the lines are so short you forget to look around and just focus on when to break at the next platform coming up.
The guides stop at some waterfalls which are the half way point where you can jump in to cool off.
I didn’t feel like jumping off tall-ish rocks into reddish colored water was an experience I needed for that day 😛
Leaving the falls you climb up numerous stairs built into the hill to reach the next line.

Not an easy feat in cooking hot weather, elevation and wearing a harness that adds a couple of pounds.
Or I’m simply more out of shape then I realised 😛
Once the tour ended we started heading back to the villa.
We stopped at one beach we had seen on the drive there.
This one had white/grey sand and lava rocks for the waves to crash into.

If only cameras could capture the true beauty of the colors and size.

Once again Villa life brought catching up with family and Instagram.
Pool time.
And food time 😉

We got Italian dressing and some chicken breading so Mike decided to cook some up “schnitzel” style.
I got the potatoes frying, poured the drinks and that’s about it.
Supper was good 🙂 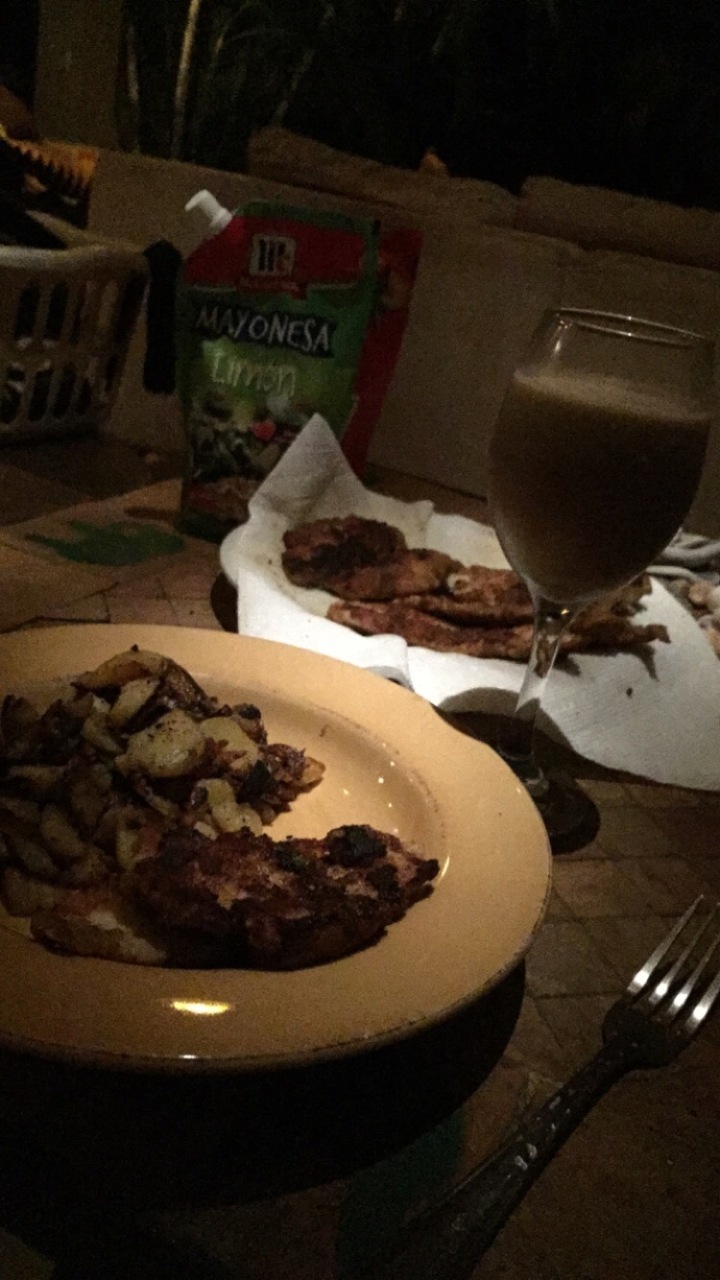 Good thing we didn’t hire the private chef when I have my own, for free ;p

We headed into the room as the rain started to come down.
I went to bed early against Mikes protesting, flashlight shining and attempts to wake me up.

Around 1:00 a.m. we woke up to pouring rain and dishes rattling in the kitchen…
The raccoon had found us.
Despite shouting, banging on the wall and shining the flashlight around.. he stuck around to enjoy the remains of our dinner too.
Mike went out to scare him and minutes later he was back so we gave up and just hoped he wouldn’t break anything.

By then we were both fully awake, so we got some iced tea and chips, set up a movie in bed and tried to hear it over the rain.
I wanted a back rub and Mike said he would tomorrow if I was the first one out of bed .. we will see what happens 😉