The sound of scattered rain greeted us and we assumed we were finally going to get one of the “rainy season” days we had come expecting.
But by the time the kitchen was put back in order and everything was cleaned thoroughly with lots of soap a hot water (thanks Mr. Raccoon) the rain had ended and the day turned into another sunny scorcher.

I got coffee started and went to work on a post for jemstory.
Michiel woke up and started to make french toast for us.

After five pieces of french toast with butter, brown sugar and cinnamon, I decided it was time to take a break from the hard life I have and go sit in the sun.

30 out with a UV index of 9 , so that means super opportunities for tanning, and burning but burns turn into tans later.
At least that’s what I tell myself ;p

Oh and by the way, I was out of bed first, and I did get my back rub too 😉

Mike was already thinking about a snack/early lunch.
No surprise there.
He made us some toasted cheese bread subs with chicken, cheese and a lemon mayo they have here.
Once again I received a poolside meal and iced tea 🙂

More swimming and tanning before we decided we once again would require more groceries if we wanted to survive 😛
So we made a quick list, got ready and headed down to the town in Mal Pais.

We were going to check out some beaches or the local fishing harbour but with the travel on the bumpy roads taking longer then one thinks and the sun setting by 5:25 it limits how much you can accomplish in a couple of hours.

We found a lady selling bracelets and Mike had to exercise his bartering skills obviously ;P
So in the end we walked away with 8 bracelets, original cost 21 thousand
colones but now for 17 thousand.

Next we seen a truck selling the fruits I have been wanting to get for an easy refreshing snack.
I had them in Hawaii and they called them “Lychees,” here they are known as “Mamachinos” and supposedly the Howler monkeys love them.

From there we went back to “The Bakery” and got a smoothie and dessert.

A Wake up call smoothie which indeed suited its name.. very hard to describe its taste but it had pineapple and mint and that’s all I know for sure.
Also a delicious little Ferrero Roche cake.

Next we went to a “Super Ronny’s” for our groceries.
Mike wanted steak but couldn’t find any.

Supper was Tacos suggested to us by Tino.
We got beef and chicken tacos and their special of the day, cheese stuffed jalapeño poppers.
The owner was from Belgium so he and Mike got to chat in Dutch for a minute.
He told him they didn’t have steak here because the climate and area don’t make for good beef, but the chicken here is really good.
That sounds fine to me 😉
We got the food to go and came back to the villa to eat it and try to see a sunset. 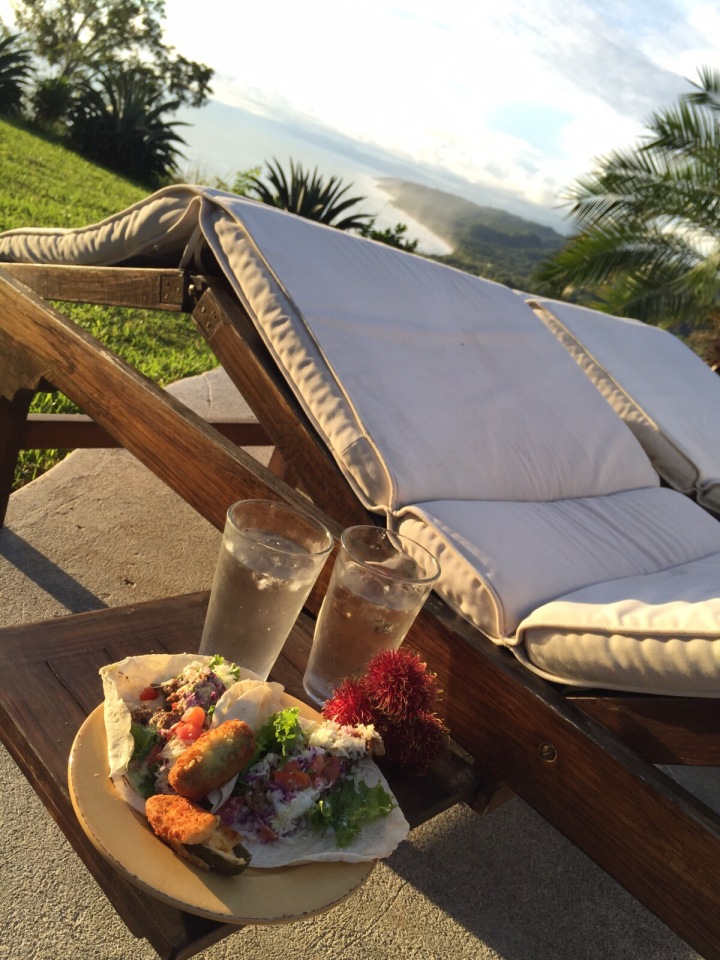 The clouds blocked the sunset but after that Mike did spot some monkeys in a tree not to far from the villa.

We watched those for a while and then I went into the room early as I didn’t feel like sitting with the moths and bugs again.

Discovered I got sunburnt.. bring out the Aloe Vera gel!

Mike brought in some snacks and turned on a show.. telling me if I fell asleep he’d turn on music loud and talk and make me wake up because he didn’t want to be bored in the room for over 6 hours..

Jem moment: Not having to cook once today thanks to my Hubby.. And Aldo at Taco Bar ;p