The rain finally stopped in the early morning hours.
I managed to get a little extra sleep thankfully.
I awoke to sounds of Mike in the kitchen and a soccer game playing on the laptop 😛
French toast was once again ready and waiting for me when I crawled outta bed 🙂

Felt pretty rough.. achy head and sinuses.
Troubles in paradise I suppose.
Laid on the couch catching up on social media and choosing photos for yesterday’s post etc.
Any movement made my head hurt so I didn’t feel like doing much else.

The morning was cloud covered but when the sun did make an appearance it was definitely warm.
Got the late morning swim out of the way and because of my sleeping in, it was afternoon just like that.

Mike really wanted to go driving north and check a beach we hadn’t make it to yet as well as just driving checking out more jungle and towns. 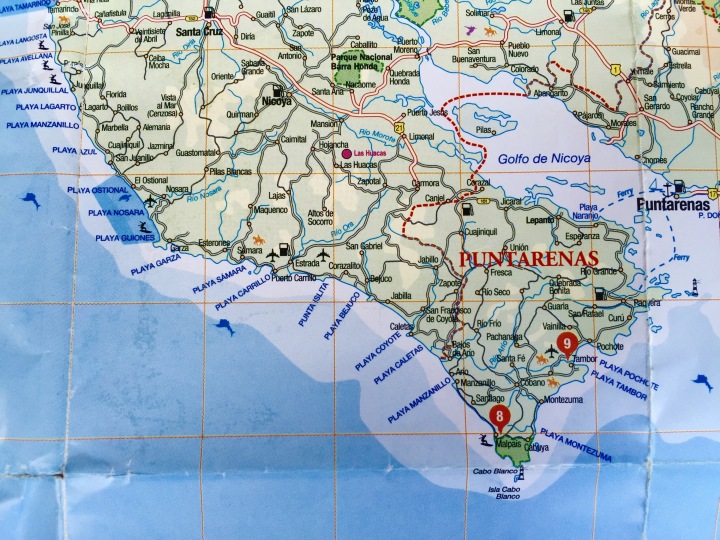 Our villa is located right under Malpais on the bottom tip. The ferry, middle right is the one we took to get here and along the left coast and inland you can spot some of the areas I have wrote about.

I had to decide if my head was feeling up to the constant bouncing the roads never fail to supply.
We headed out by 2:30 and figured we would just see what happened.
Made it to the furthest beach, more shells to sort through and decide how many I can or cannot fit in the suitcase. 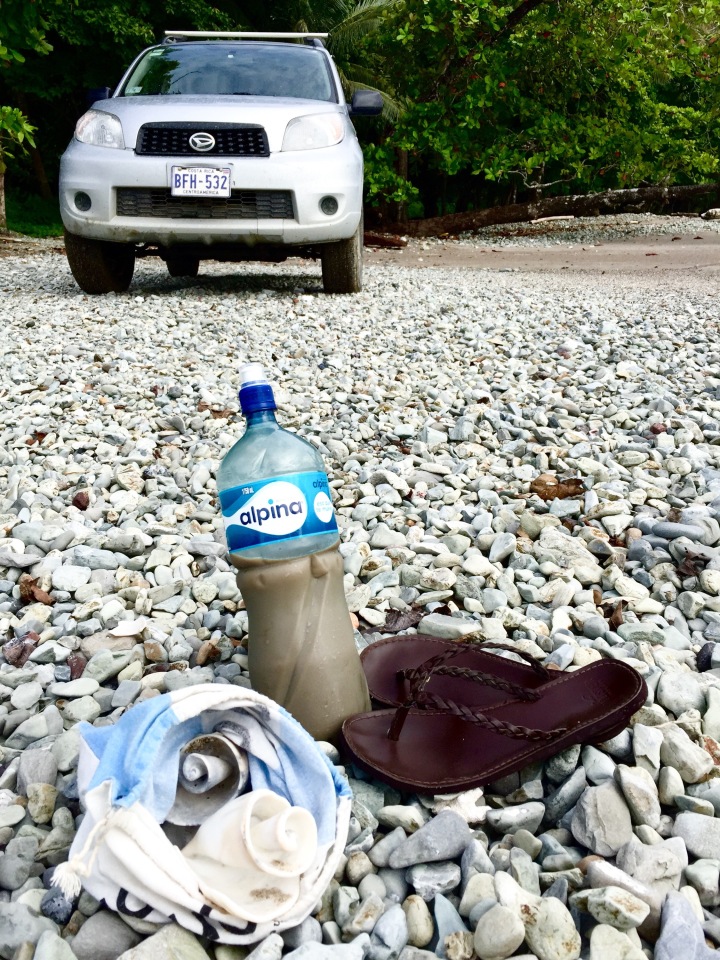 It’s a tougher decision then some may realise 😉

We then took the turn to hopefully lead us to one more beach to check off the list.
We drove a fair bit, until we couldn’t anymore.

The road literally ended in a river.
It was a pretty jungle area so we stopped, yes to take a selfie.
Then tonight Mike was reading some stuff about where we went or could go and supposedly in the dry season that raids the shortcut but now with the rain its unappeasable.
Oh and also in 2015 they advise travellers to NOT take this road as when you stop at the river, armed robberies have been happening a fair bit..
Yep the exact spot we were completely oblivious and all. “ Look at the pretty jungle! Leave the car open its fiiiiiiine. Photo over here Hun!” 😛
Thankfully we did not encounter anyone or anything there.

Along the way back we stopped at another prime photo location.
But when we got out of the vehicle there, howler monkeys started, howling, directly above us.
They don’t sound friendly.
So back into the vehicle, but of course with the windows down so Mike could try to learn yet another language, Monkey.

We turned around and headed east to Cobano, the town north of Santa Teresa.
We wanted to stop back at a bakery we had been to on our first day in Costa Rica.
Our purchase, cheese buns and some kind of freshly baked enchilada crescent.
It was really good!
A spicy jalapeño, cheese and potato filled warm crescent like I have never tasted before was our pre supper snack.
We actually skipped lunch today…and lived!
Though Mike had made an iced coffee/chocolate milk drink to keep us hydrated during the drive.

As we headed out of Cobano Mike seen some kids playing soccer.
Mike, “Id love to join them for a couple of minutes.”
Jess, “Go ahead.”
Mike keeps driving. “Id just really like to.”
Jess, “ I SAID go ahead?”
Mike stops car and starts turning around.
Jess, “Just hopefully they aren’t weirded out by some tourist guy that wants to join the game.” :p
Mike sighs and starts driving the car back towards the villa.

By the end of the conversation, Mike did end up playing soccer.
For almost an hour some local kids graciously accepted the overly tall, sunburnt tourist who wanted to join their game and spoke no Spanish.

Once in Santa Teresa we found a “Soda” to have supper at.
Tino had told us to eat at one of those if we wanted a classic local dish of rice, salad and a choice of meat.

It was pretty much straight to bed for me by the time we reached the villa.
My head had had enough for one day.
Mike cut up some fresh mamachinos to snack on and then I fell asleep.

It’s now 12:30 and I can’t remember what woke us up, but whatever did must have done it well because sleep doesn’t look like it’s in my future.

I really want some popcorn..

“About an hour later.”
The raccoon came back and I heard him in my shells so that was just cause to alert Mike 😛
After we got up and covered the shells, turned on a few lights and talked to make him leave, I decided I should indeed make that popcorn id been thinking about. Mike stayed up with me and we snacked and watched some “White Collar.”
(Never start a movie series midway through with someone who’s never seen it and asks a lot of questions ;P )

One thought on “Local Life Saturday ”