I admit I slept most of the drive, but what else are long ish car trips for?

We sat to have a coffee with aunty before she flew out to Malaysia.

In doing so we found a new spot to enjoy coffees the next airport visit perhaps.

Bidding her farewell, we dropped off our things at the hotel and got a shuttle to the metro so we could begin our shopping and sight-seeing.

The first place Mike directed us to was somewhere he had searched out online and also in been in contact with for work.
Patisserie Tout, a treat shop… the storefront adorned with a macaroon display. 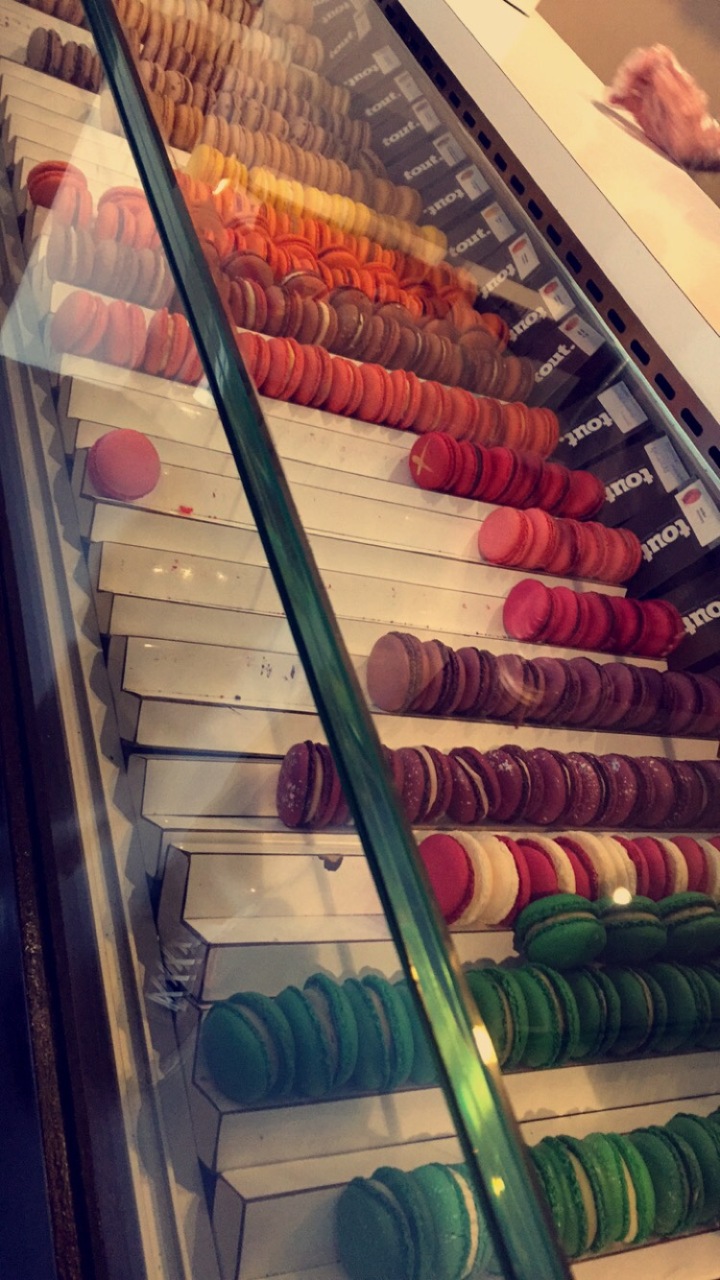 After purchases a box of said macaroons, we headed across the street to have lunch.
Tasty, roast chicken sandwiches were our meal of choice, mine with avocado and Mikes a bit more on the spicy side.

Somewhere along the way we realised we had forgotten our museum cards at the hotel, so it was going to be a day of shopping and sight-seeing of Amsterdam, rather than Van Gogh or Rembrandt’s work.

We walked and walked… and walked.
The shopping style here in Europe.
The weather wasn’t to cold, but chilly enough when your outside most of the day.
Lunch was at McDonald’s.
Their McDonald’s are like most of the other buildings, tall and narrow, so we had to walk up to the third level to find seating.
Mike is just now telling me that back in the day you had to pay tax depending on how wide your building was, thus explaining most of the buildings lack of width.

Many things to adjust to, learn and figure out.

Sauces at McDonald’s cost like, .70 cents each. So much for having chicken nuggets bathed in the best sweet and sour sauce ever.

Scan your metro card upon entering and leaving the station.

Scan it upon entering and leaving a tram.

The metro does not stop very long so don’t get distracted taking a photo or your husband will have to stop the doors with his foot and try to get them back open.

Cobblestone shouldn’t be walked on all day with any type of heeled shoe.

I learnt and observed more than that I’m sure, but as of this moment those lessons escape my mind.

We eventually headed back to the hotel, tested a macaroon and then I proceeded to fall asleep.
From 5 p.m. till 9 p.m.
Mike slept too so it can’t all be blamed on me for sleeping away the evening.

I wanted to try and find some Chinese/Japanese food so Mike asked the desk attendant if he knew of any good places, that would still be open.
We drove about 10 minutes and found ourselves at “Ichi-e”.
Drinks here are small and you do not get refills, so I decided on water so it wouldn’t feel like such a waste of money.
Then Mike bursts my bubble and tells me they even charge for water.. rip offs.
So the nummy, fizzy iced tea they serve most places here, happily replaced it.
( And was gone in like, two sips..)

Anyways, to the real dishes… they were perhaps a tad pricey, but all delicious.
One of those rare meals that though small, each and every dish is thoroughly enjoyed.
Oh, and we had to eat with chop-sticks… And I actually didn’t even spill on myself!
Maybe I should convert to using them all the time if that’s the result.

Upon getting off the metro we grabbed a almond-honey hot chocolate from   Starbucks before hopping onto the tram that would take us to the ‘Rijksmuseum’.

Its tremendous structure is filled with art and treasures.
Riches from the past and gloriously told tales describing from which they came.
Wooden shields etched with scars of battle, gold shimmering, jewels to be seen oft-times in dreams alone.
Brush strokes only the masters could so perfectly design to bring to life their inspirations.

Annnnnd… thats all made up.
I mean its true, but not how I feel while seeing it.
Mostly museums confuse me, make me feel mentally inept and a maybe give me a bit of a headache trying to understand it all.
It is very interesting… for a few minutes.
Mike and I thankfully share the same attention span when it comes to museums and what they offer.
It would be very easily possible that we were in and out before most people finished the first floor.
But I’m still glad we went and can say we have been ( and sound like we are some in-depth, intellectual, museum buff couple).

From there we headed to the ‘Van Gogh Museum’.

It was much busier in there so pushing through crowds made the experience one we rushed through.
Van Gogh didn’t even know he was famous, why should we ?
Just kidding, my mom is going to hate me for making it sound like I have zero knowledge of anything slightly historic.
She really did try to teach me better.
After all that brain stimulation we were famished.
We walked around looking for lunch and settled on ‘Hard Rock Cafe, Amsterdam’
It was pretty pleasing to the taste buds.
A strawberry, mango, pina colada to start things off and then I got the local legendary which consists of a burger topped with ham, sauces, gouda and crispy onions.
Mike got a hickory smoked burger.
Mine was better. 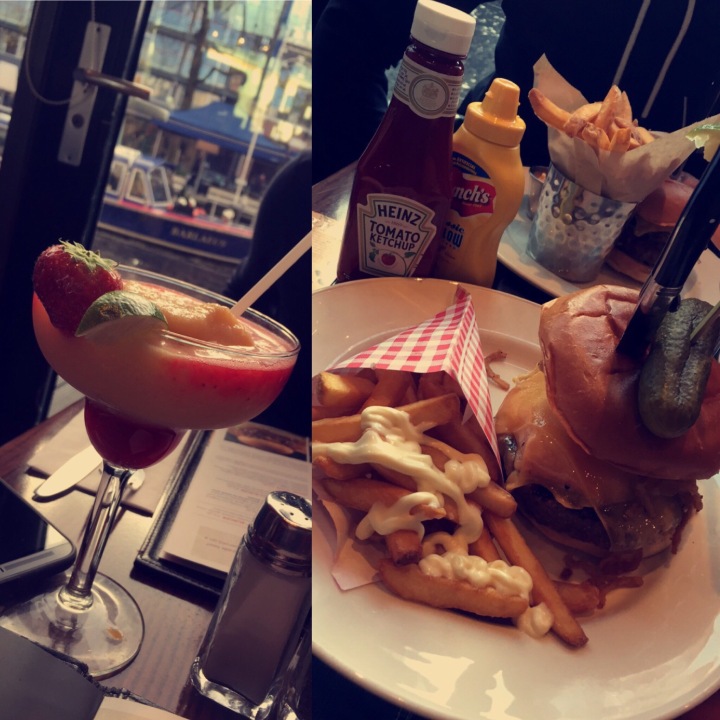 Took some classic Amsterdam Canal pictures and glanced in a few stores as we walked back to the tram / metro. 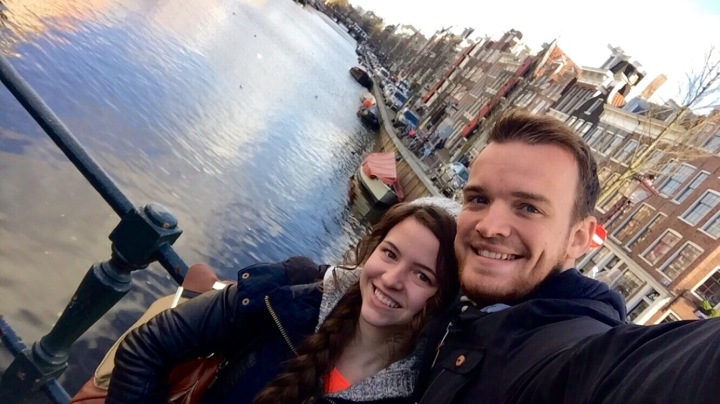 Got back to the car at the hotel… after waiting 40 min. in the cold for the much delayed shuttle.
We could have walked to the hotel in that amount of time, not like I wanted to walk more but that’s besides the fact. 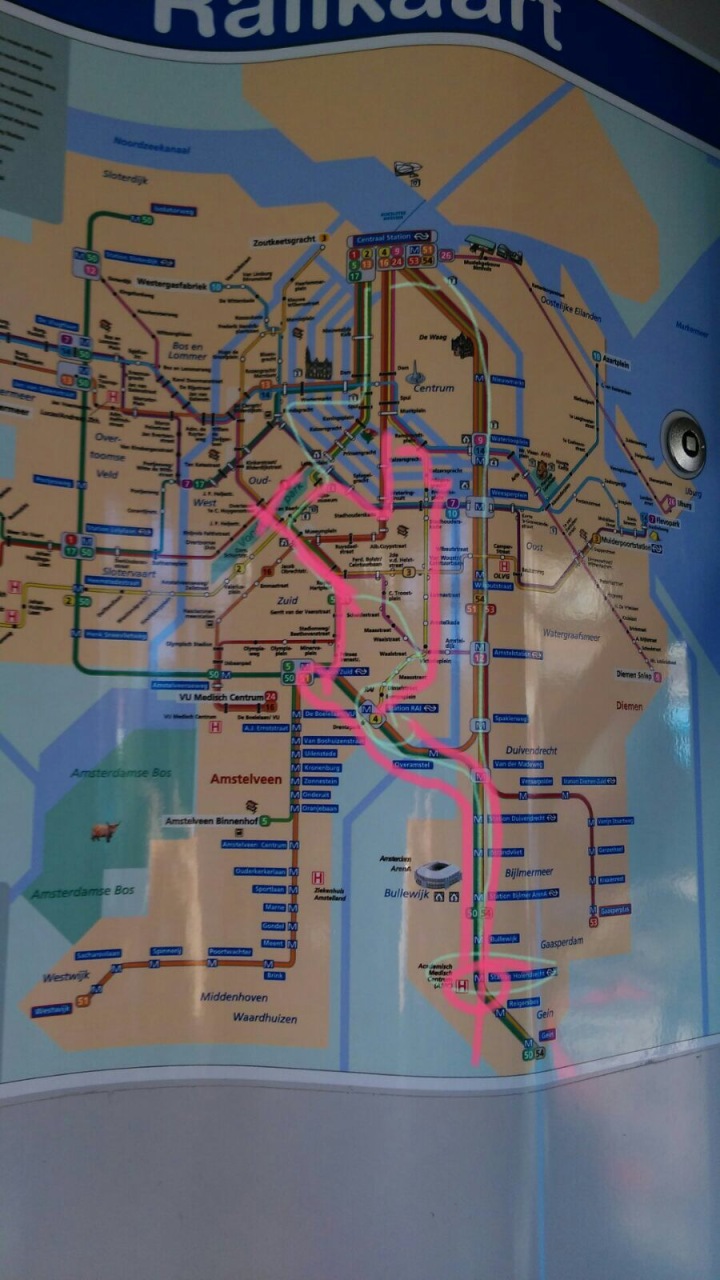 Our paths from the two days in Amsterdam are traced in Pink and light green, thanks to Mike.

On the way back to the cottage we stopped at an outlet shopping centre called Bataviastad.
It’s a walled area of stores all connected but you still have to walk outside to go from one to the next.
Its weird.
At the entry we get stickers to use at any of the stores, which was cool.
As well as getting a member card that gets filled with a small amount of money for every purchase you make.
Mike out shopped me by far ( not surprisingly ) but I did finally find new runners, which had been my goal for the weekend.

Again the driving begun and 45 minutes later we were back at the cottage.

I think we scared Fiji for life by leaving him there alone for two days… or that’s how he acted anyways.
He was tripping us he was so close to our feet and if neither of us were in the room with him he would start meowing immediately.
Poor traumatized little feline.

Mike sprayed off our new shoes with our also newly purchased waterproof spray so they would be ready to go on our next tromp about.

I’m sure we ate something as that only seems normal for us, I just can’t recall what it would have been.

Our bed felt nice after a tiring but good weekend away