I’ll tell you what, Gloria Palace knows how to make a breakfast.
Mike and I don’t even love breakfast but we were impressed.
We walked into the breakfast room and sort of just stood still for a minute and just looked around trying to figure out where to begin.
They had different areas for everything, sweets, eggs, meats, yogurt and cereals, drinks and breads. 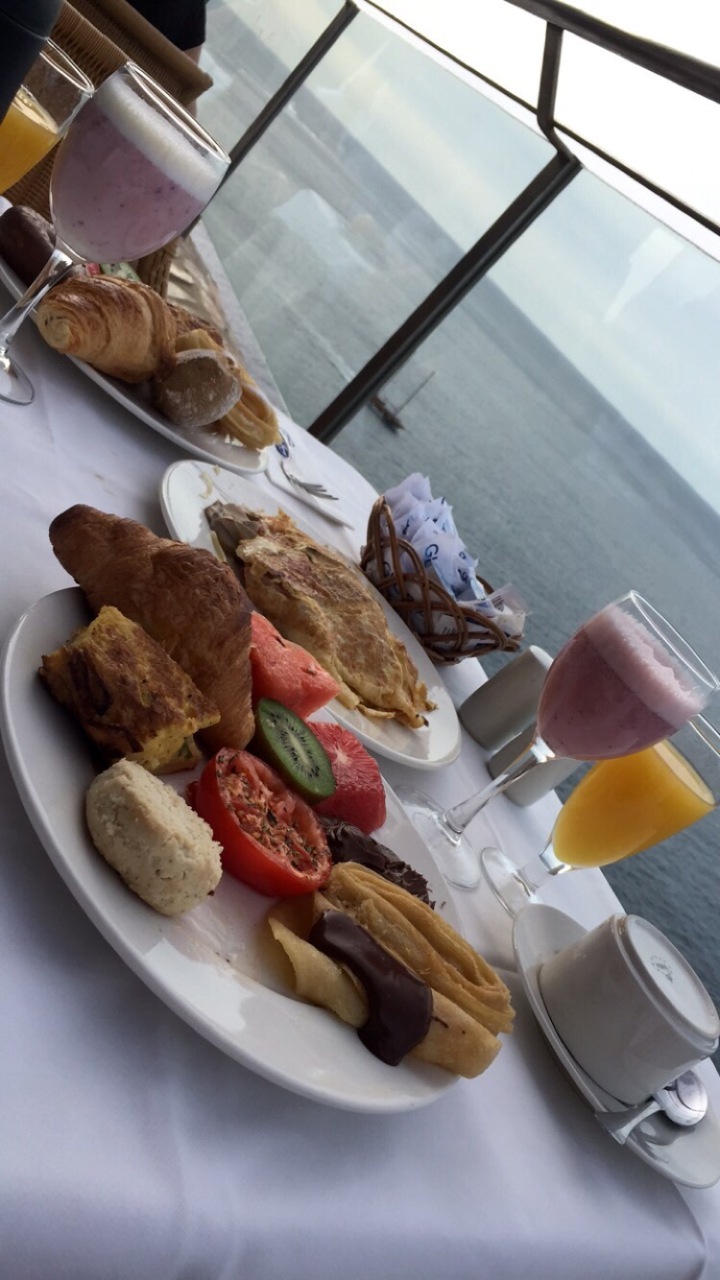 We loaded up our plates and went to eat on the balcony overlooking the ocean.

We decided to walked around the hotel to explore what it had to offer before heading out.
Pools, restaurants, lounge and spa areas are spread out, almost all offering an ocean view.
Back at our room, we grabbed our backpacks and headed out to see the town and beach. 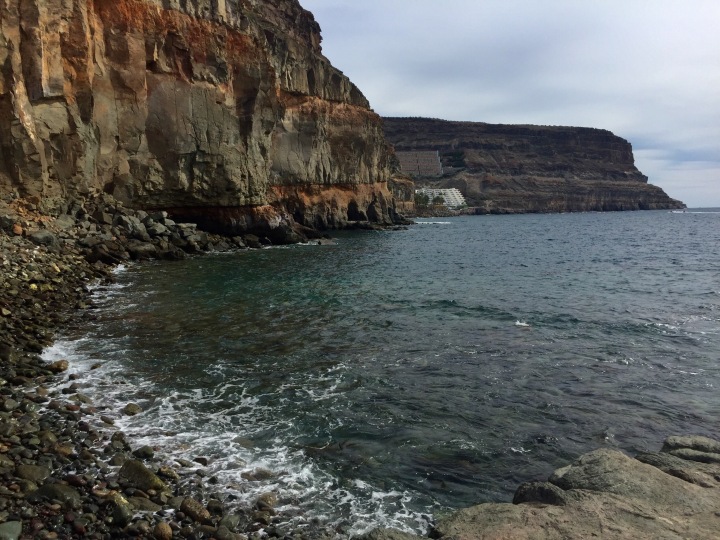 We walked along the beachfront stores and into a little shopping area.
So many souvenir shops all carrying the same items make it hard to try to find something unique FROM Gran Canaria, not just China.

Once we were finished walking around there we went back to the hotel to pack up and check out so we could start the drive over to the other side of the island.

It turned out to be an almost 2 hour drive, on twisty mountain roads.
I didn’t find it real enjoyable.
We made a couple stops at lookouts and beaches along the way.

The first one was a rock beach.

A few signs there told of how the beach had been used during war, a stone wall lookout built into the cliff side could be seen when you looked closely.
Another stop wasn’t at a beach but a look out along the coastline.
The terrific shades of blue ocean crashing into the rocks below never cease to bring happiness to me. 💙

Back into the car for more of the interesting driving conditions and finally we got to the town Mike had wanted to stop in for supper.

This was a true fishing town. 🐟🐡🐠
The restaurants all boast of fresh fish, squid and more fishy things.
Unfortunately those fresh fish also come served with their heads and bones all intact so we opted for a less authentic meal.

One dish we seen available was called ‘Wrinkled Potatoes’ ?! 😜

When we parked the vehicle at a private owned parking lot, the man who owned it was super nice and willing to help even though his English was very limited.
Mike asked him why town was so busy and suddenly he is walking with us along the streets explaining different sights and directions to go.
We went back to him to ask where we should eat.
He told us ‘El Dedo De Dois’ ( also the name of the town ) was good and where he always eats.

So we sat down there and ordered garlic shrimp and breaded chicken breast with fries.

The shrimp was very tasty and brought out in the pan with the hot cooking oil and we think some kind of fried nut.
The chicken was lacking… Mike said maybe don’t order chicken from a fishing town again 😏
Meals seem very cheap here though, plates averaged 6 euros on all the restaurants we had glanced at.

After we finished eating we drove through Las Palmas (the big shopping area here) to get to our hotel for the next two nights.

We checked in at the ‘Hotel Maipez’ which is a personally run hotel and has more of a local/relaxed feel to it.

No wifi, no english tv, to cold for the pool.
Not complaining at all, simply fact stating, so Mike figured we should head back out and look for dessert maybe.
I’m glad he did because what we ended up eating at ‘Jordin Canario’ was pretty delicious.
The waiter tried to explain a few desserts and then he asked if we trusted him to choose for us.
We said go for it and we were glad we did.
Coffees with sweetened condensed milk and two desserts, both hard to explain but i’ll attempt to.
Our favourite was a traditional Canarian dessert named ‘Huevos Moles’ and supposedly isn’t easily found many places.  Its made with corn flour and overall has a slight cornbread taste.👌🏻
It’s almost a room temperature pudding texture on top… but deeper in the dish the dessert is cold and almost ice cream consistency.
Mike and I both said the dessert was super good but really confusing to our mouths :p
The other dish was ‘ Polvito Uruguayo’, a creamy, sweet mound of fluffy filling, topped with crunchy sugars and crumbs. Pretty much an elaborate pudding.
We were a little worried what it was going to cost as it seemed like a bit more of a classy place and the dishes being as tasty as they were, but it was only 12 euros for two specialty coffees and two specialty desserts!

If only eating was that affordable at all restaurants… but then we would for sure be a chubby married couple so it’s probably a good thing in the end.😋