Woke up and did a little house cleaning before enjoying a late breakfast of brown sugar and cinnamon toast accompanied by hot chocolate.

I joined “Letters Art Collective” which signs you up with another member and you then have to send each other a hand crafted card. 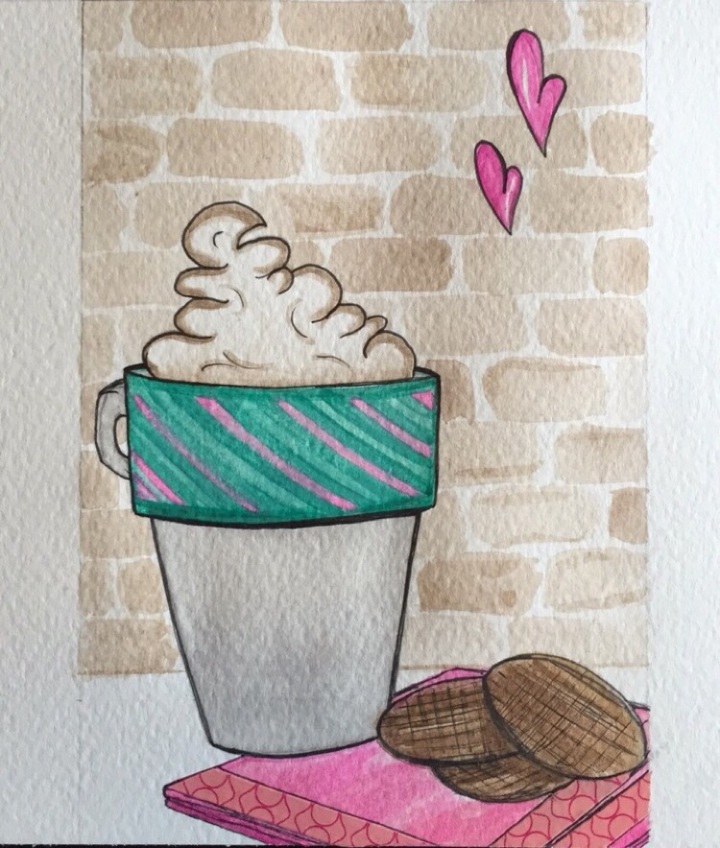 So my creativity came alive and I painted her a card as well as a card for Mike for Christmas.

I asked Judith to order a soccer ball for me but it was going to be shipped to Germany, so I painted what he was going to receive.

We don’t have any envelopes.. Something you don’t think of for the average shopping list I guess 🙄
Lack of envelopes meant I had to craft my own for Mikes card.

I also did some writing and sorting through wedding photos to choose a picture for the thank you’s.

Leftover burgers for supper… The night before I was already pretty much asleep and I hear Mike whisper “Hun, burgers are fine for supper tomorrow too.”
When I woke up I couldn’t remember if he’d actually said that or if I’d dreamt it in hopes of not having to think of what to make the next day.
I texted him and happily read his reply of, yes he had said to make burgers again as the later he had laid awake the hungrier he got and the better burgers again sounded 😜

That about sums it up…

Woke up with a runny nose and aching head /body so I curled up on the couch with my Canadian flag blanket and the wheat bag my sweet mother made me and rested away the day.

Mike got home from work and hugged me and then suggested a shower may make me feel better.. Nicest way to tell someone you think their hair is dirty 😏😜

He stuck a pizza in the oven and decided to try his hand at breaded mozzarella sticks.

Which I enjoyed eating after my shower😏

I Facetimed mom for a little bit later that day and she gave me a couple of recipes I had wanted.

Sour cream softies were whipped up quickly and baked slowly.
Five at a time on my one small pan for the oven… It’s a dark pan so the first ones puffed up nicely but had crispy bottoms.. The rest were experimentations with temperature and finally tin foil.. Suggested by a wise mother 😉

Farmhouse chicken was for supper
A recipe I’ve been making and enjoying since I was around 13 years old.
The chicken is breaded simply with flour and pepper and then you fry it in Italian dressing and slowly add chicken broth and cream cheese.
The remaining sauce is used for the cooked carrots and rice.

It tastes better then it looks… I promise 😉
We quickly ate that and then went to town to get some groceries before the stores closed.