Mike must have transferred some of his illness to me because as the night progressed, so did my discomfort.

I spent that day fighting off extreme heat and chills and an aching body.

Roads were closed because of all the freezing rain during the night and that meant there was no chance of sending Mike out to get me meds either.

So thankful for the wheat-bag mom made for me to bring with to Europe.

Mike heated up some soup I’d had in the freezer for our supper.

That night was spent much like the previous day, aching and tossing, fevered enough to sweat through my pjs and the sheets.

Mike was a dear and wanted to help but there wasn’t anything he could do.
Unless he could suddenly turn into mom because as we all know, no one beats moms love when your sick❤️

He headed to work and commanded me take a long shower and to maybe please wash the sheets 😜 (which I was going to do without him asking, no worries 😏)

He also proudly picked up the new car and sold the old.
No longer a BMW driver but an Audi one.

Other than doing laundry, I once again just laid and dozed off and on between movies and wheat-bag warmings.

I was going to make him a chicken caesar salad for supper but upon taking out the lettuce, realized I’d waited to long to use it.
So a frozen pizza was pulled out and topped with the chicken that I’d cooked up and Mike added some peppers and tomato as well.

I was on the road to recovery!
Coughing slightly and the occasional nose blowing but all in all better than the previous two days.

I made a strawberry, banana, oatmeal and cinnamon smoothie.
It was pretty tasty.
Thanks again Pinterest.

More laundry was done and also all the dishes that had piled up over two days.

Side fact : Our cottage has a single, small, round sink in the kitchen and that is the norm.
Most of the houses you go to here have only the one, small sink.
It’s a feature I do not approve of 😜
If you’re gonna wash that many dishes you need a little more space!
Also, round? It matches nothing else about the cupboards shape/stove top then.
In my humble Canadian opinion, sinks should be larger (but I think that about lots of stuff here 😜) and preferably not round unless it’s in the bathroom.

P.s. The bathroom sinks are usually weird too, they are big on space-saving so expect to wash only one hand at a time in that tiny little basin😏

Once Mike finished work we were going to go drive to Germany.
Mikes cousin Sebastian and some friends of theirs that were still out because of the youth camp wanted to see him once more.
So I got ready and packed our bags as we would spend the night at John and Inge’s.

We went to a Turkish restaurant called ‘Viransehir’, which Erwin had suggested.
They first bring out a salad with pita like bread to dip in salsa and a garlic greek yogurt.

(tasted like plain sour cream to me.)
The bread was probably my favourite part along with the Turkish rice which is really seasoned barley.
The main dishes were lots of meat.
Steak, lamb, chicken and a very tender, chicken like meat which we couldn’t figure out the real origin of.
The boys all loved it 😜
It was a little to much of similarly seasoned meats for me though.

Once the meal is done they brought us each a small glass of tea and sugar. 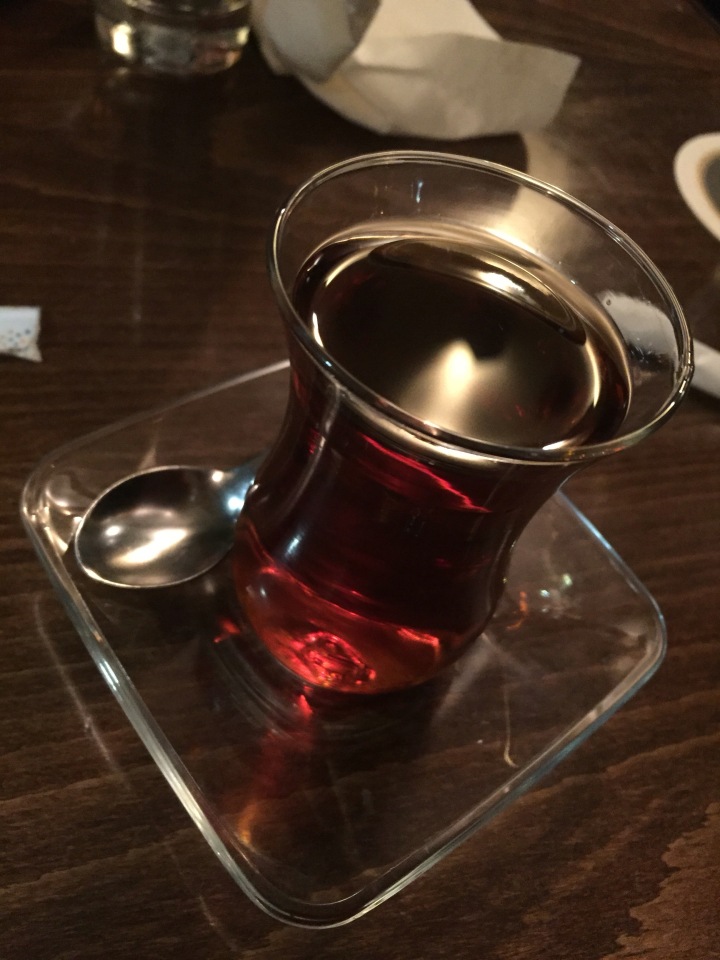 After a short, chilly walk through town Mike invited the guys to Inge’s for coffee.
So we relocated there.
The boys played the classic Dutch game called ´Sjoelen´.
And I had a FaceTime date with mom 😊