The morning was spent getting a few bits of mail ready and sorting through papers to clear up the counter spaces… No one likes clutter.

(Not among the Peters girls anyways 😜)

More laundry to do… With only two people in the house, we must be slobs with the amount of laundry that has to get done😜

The house needed cleaning sooo, that was a process.
Shelves dusted, floors vacuumed blah blah.
( A real vacuum is proving nice to have though… you know you’re an adult when 🙄 )
Rearranged some of the shells and lit some wonderfully scented candles.
De cluttered some other places and spaces and ended up feeling pretty good about the newly freshened cottage 😊

The freezer had plenty of pizzas that needed eating so that was an easy supper choice but since we had been having pizza all during the weekend I made some buffalo chicken dip as a side. 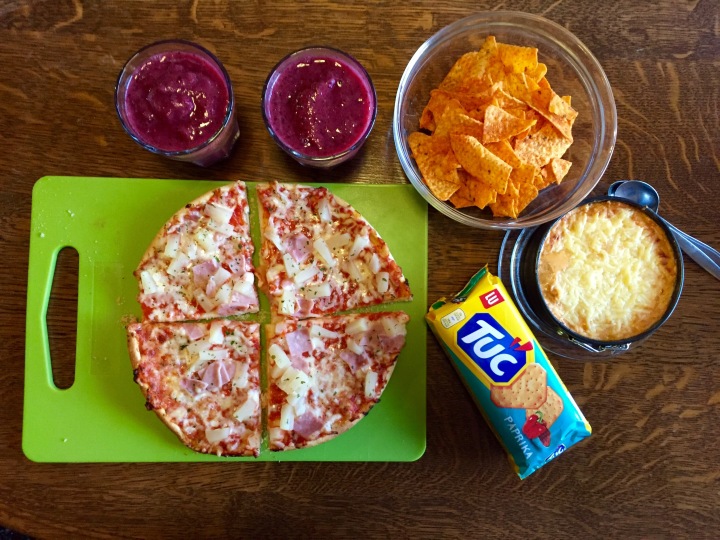 Mike went to check the newly set mouse traps and was disappointed to find them empty… Though technically isn’t that better than finding them full??

Aunty had mentioned someone may or may not stop by the cottage because of her wanting to sell, so I was up early and finished putting away the laundry and dishes as well as making sure I didn’t look like a monster that had just emerged from its cave 😏

Plus it turned out to be handy because Mikes friend from Finland was in Holland and wanted to see him, so he was coming for supper.

I had a picture I’d been planning on trying for a little while and it was the afternoon to do so.
After about three drafts I came up with one I was okay with ☺️

We hadn’t been grocery shopping for a while so I had to dig in the freezer and figure out what I could come up with for our supper with a visitor.

Rib eye rolls, rice, green beans, garlic bread and a smoothie is what I came up with.

Unfortunately I totally forgot I always make the rib eye rolls with cheese until Mike was telling his friend what was(n’t) in them!

Of course that only happens when a guest comes over 🙄

He brought flowers and chocolate… It was very thoughtful but also felt a bit funny to be the one getting them.

Usually you see people bring your mom little gifts when they come over for supper etc. but never have I been the one to get that kind of gift.
I reeeally should have remembered the cheese… Haha

Cookies and coffee were brought out and thankfully they turned out and maybe redeemed the meal fail a bit 😁
The last of the good coffee beans were dug into and the cookies had a decent amount of smarties per cookie and isn’t that most important? 😏😜

We attempted to play ‘Dominion’ with Josh and Pro when they were here but after an hour of set up, instruction reading and tutorial watching we gave up.
Mikes friend Kristian thought he could figure it out 😏
I think he got a better grasp on it than anyone else had yet, but the grasp wasn’t tight enough and after about half an hour of, you guessed it, instruction reading and tutorial watching the game was put away unplayed yet again 😜

After Kristian left, Mike was a dear and did all the dishes and then did some studying for school the next day.I went to bed ☺️
Falling asleep with ideas to try out the next day.

4 thoughts on “Hummingbirds And Blueberries 💙”