He had school during the day and then a haircut that evening so he was gone all day, meaning I didn’t have to make dinner 😏👌🏻

I wanted to try to make some more marbled paper and I thought Mikes shaving cream was the foamy kind and not gel so it would work better than our last attempt.
It was gel.
But I continued on anyways.

The process is a little messy but waiting to see what patterns you achieve is worth it 😉 The paper does have a strong masculine scent due to it being guys shaving cream but hey, it could be worse 😜

After the papers were done and the dishes cleaned so they wouldn’t be stained weird colors, I moved on to the project of taking a picture for the giveaway 💝

No worries… I ate the cookies and gave the mints to Mike, I didn’t touch any of the food that’ll be coming to one of you’s 😏

I went to write a note with my glass pen only to find the tip had been chipped somehow!
I was (and always will be) devastated 😢
I never even got to write a real thing with it!
I guess we HAAAAVE to go back to Venice now🙄😏

I’d seen something on Pinterest that inspired me to try to do my own hair wrap.
I figured I had the time and thread to spare so why not give it a shot.
Of cooourse I chose the longest pieces of hair on my head 😏 It didn’t take as long as I expected and I was pretty pleased with the outcome though next time I’d want a bead or something to finish it off with.
I decided not to tell Mike and see if he would notice it by himself, time would tell 😋
I didn’t take a picture so I will show you’s what it looks like in a future post 😉

I spent a bit of my evening catching up on reading my blog e-class and working on some other writing / Instagram related things.
Small steps and slow processes for not much of a blog.
It may seem pointless to some but it’s nice having something (small and insignificant though it may be) that I can learn about on my own and try to improve 😊

I welcome any tips and suggestions!
Weather it’s about the layout, posts subjects, things of interest/questions, Instagram feed etc! 😊👌🏻

Typical Saturday morning relaxation and a slow start to the day with coffee in hand.☕️

I had the giveaway to post and on here and instagram so that took up my morning.

Mike didn’t notice the hair accessory until I pointed it out to him.
(Even though the evening before I had put my hair in a bun that showed the wrapped part all throughout it… men 😜)

I do it for self entertainment more then quality of work and that is something I should probably try to change.
Though I have been know to settle down and do work acceptable enough to have some custom pieces sold when I’d set my mind to it 😁
It could have just been the dollar signs effect though 😉

The morning and afternoon quickly blended into each other and Mike begged me to do something with him.
Walk, go for a drive, go to a store, anything and everything I did not want to do.
I had good reasons for not doing any of his suggestions though!
I had showered so my hair was wet and I’d freeze on a walk, we drive so much as it is annnnd I just fall asleep if we are in the car and we should know by now the only stores we really like are grocery stores and we would leave with MUCH more than we needed!

All that aside, I really don’t understand him.
He works four days a week and goes to school Fridays.
Come Saturday you think he would be ready to relax and do nothing, but no.

I had suggested we go gold-fish shopping awhile ago but the pet store was closed then.
Trust Mike to use that against me this day and say if we rushed, we could go check the pet shop out for something to do 😏
We needed the groceries too, I just really didn’t want to go shop for them but if those two trips could be done in one evening and stop Mikes harassing I figured we might as well. 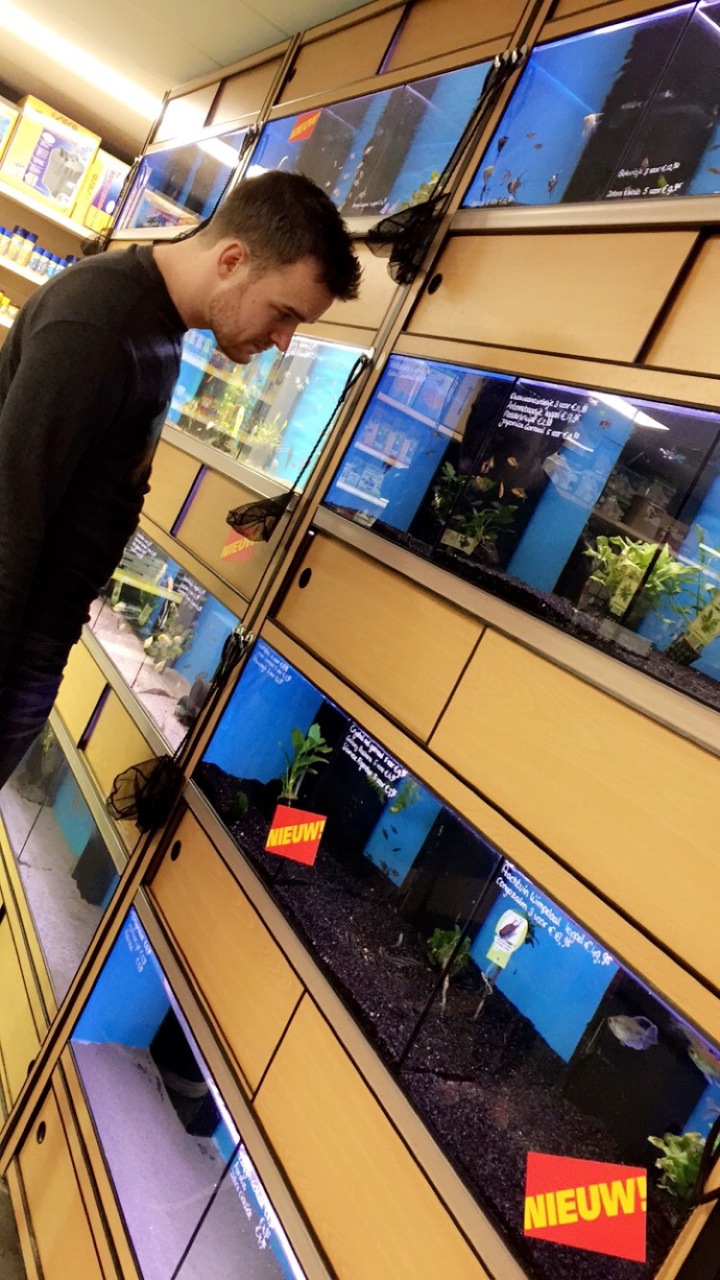 That is one thing I can.not.stand.

Flopping gold-fish in a net.

The sound, feel, look… just everything about it grosses me out and disturbs me to no end.
My sister and I would offer to pay each other if the other would take charge of that task during childhood.

Possibly even more weird is that I could care less about having to net a wild fish during a fishing trip?
I have also always loved catching minnows during any visits to a lake.

I know, I make zero sense.

A quick trip to the grocery store and back to the cottage we went.
Erwin and Sarah had called just as we were heading out, to ask if they could stop by since they were in the area so they were at the cottage to welcome us back 😏

Sarah had brought some appetizers and I whipped up a buffalo chicken dip to snack on. She wanted to try my ‘home coffee’ but we had sipped the last remains that morning 🙁 It was nice to see them and Mike got his wish of having something to do, extra fulfilled 😉👌🏻

Mike had a juice he had bought and wanted me to try.

I was feeling some hesitancy as the color was an alien green and then I seen the words ‘Gotta Chew’ written on the label.
No DRINK should need chewing…
Against my better judgment, I tried it.
Why do all humans seem to have that flaw that causes them to have unexplainable curiosity towards experiencing things they know won’t be good?
I described it as feeling like there was fake apple flavoured, chunky, pond sludge floating around in your mouth.
Have I convinced you to try it yet ? 😋