I mentioned earlier on about the story rocks I had started painting up at the cabin, but now you get to see a picture of them yourself.

I wasn’t sure how much the girls would really like playing with them but Alaina recently told me they were her, ‘favouritest ever’ 😋
That could mean nothing though, as she would probably say that about any toy you asked her about at any said moment 😏

I had to quickly come up with some kind of bag for her to carry them home in, so a rather weakly made, little drawstring bag was created…

(I may have enlist moms help in creating a sturdier one, since it does carry rocks 😜)

But, now you are more aware of what I meant when I was talking about story rocks. 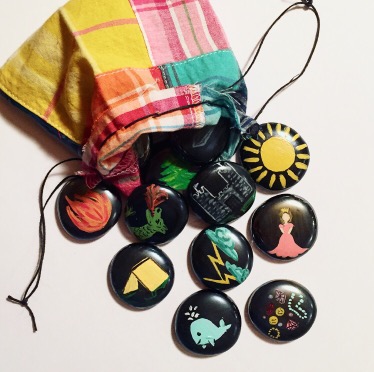 ‘And so the princess and the whale became best of friends and he would come visit her often at her castle on sunny or rainy days, sometimes even bringing her sea treasures when the mean dragon was in other lands being fought by the mighty (if slightly homely looking) Prince’