Iced coffees were attempted for Mom, Shelley and I.

Dad had told Mom he would work a short day, Mom said she wouldn’t expect him home before 3:00 so to prove her wrong he got home by noon 😉😜
Probably wishing he would have stayed at work longer because once he was back we went to work unloading gravel into the stone paths around the house.
Years of weather and walking had slowly diminished the stones already there so the paths needed some new levelling out and then filling up. 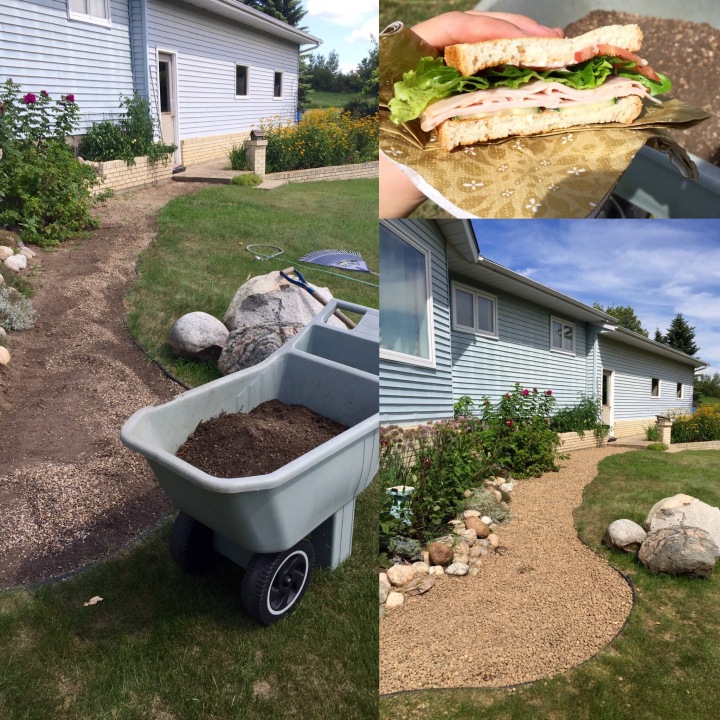 Mother supplied us with sandwiches and hydration before she also joined us.
The path was done, some bushes trimmed, some vines pulled and then the siding where the vines had been, scrubbed and pressure washed.
I didn’t do much besides the bush trimming and the gravel raking 😁
I did so with bare feet so that it was easier to walk in/spread around the gravel but in doing so I majorly bruised the bottom of them…unbeknown to me until the next day of course 😜

We had been invited to go hang out with the Nabers the next day so Mom requested I make a batch of puffed wheat.

Mother delivered me a cold, spiced clamato and I took it gratefully 😁
Savouring it until it was supper time, being the perfect thing to wash down my burger.

We met Tom, Leah, Jess, Justin and Chase at a gas station close to Waskesiu.
Then headed into town to get Dad a park fishing license before going to the boating dock.
Spotting two bull elk and some white tail doe’s with their fawns along the way.

The day was seeming to take a turn for the worse…grey clouds covering the sky, light rain drops starting to sprinkle down on us as we left the dock and headed further into the lakes🌧

We made it to the correct area and Tom took us for a cruise around the lake, that somehow had us all starving so lunches were opened and devoured during the rest of the tour 😋

By the time we got to the beach and started settling in, the sun was trying to peer out and the sky was clearing up 😊
The guys went back out to try fishing and us girls (and Chase) stayed in the sheltered bay, free of wind.

We ventured out into the clear, chilly water for a while but then went back to sit fireside and visit there.
The sky had indeed cleared but the sun was taking its sweet time coming out from behind the clouds but when it did it was burning hot!😳

The guys returned from a successful fishing trip and food was brought out.
Hot dogs, smokies, chips, cookies… and all the other usual lake goodies 😉🍇🍪🌭

It was a lovely afternoon together 😊💕

Dark clouds were coming in fast around 5:30 so we quickly packed up and headed back out, getting a light sprinkling of rain the whole ride back.

We decided to continue our fun and go out for supper, eventually deciding on Mr.Mikes and then going our separate ways around 10:30.

It was a long, full day spent with much-loved friends and it was splendid ❤️