We planned on waking up by 8:30 am, thinking it wouldn’t be a problem when considering our naps and early bedtime the previous day.

Turns out the balcony doors really block the light and I set the alarm wrong because there’s a 1 hour time change so 9:45 was the actual time we rolled out of bed, not leaving much time for the swim we had wanted to take before checkout at 11:00.

Breakfast was quickly munched, since neither of us really like breakfast at hotels and check out was able to be extended till noon so we headed straight to the beach 😊

Nothing like starting the morning with a swim in the sea 😄🌊👌🏻 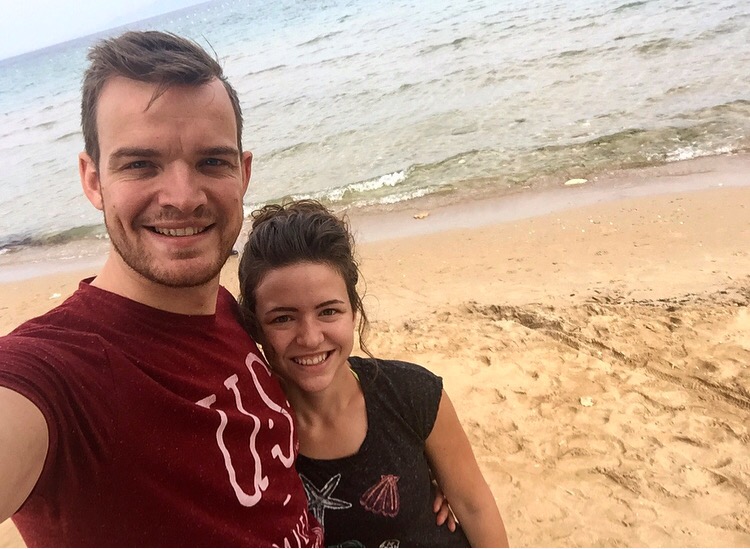 It was actually the first time for us to swim in the salty waters on one of our trips!
Usually we have places to go and foods to eat and never have enough time for a swim and the work it entails but now we can say we have officially went swimming in the sea again 😊
The water was extremely clear, decently warm and there was the odd little sand colored fish darting about.
Not many shells at all though 😔

Back up the long hill of stairs we went barefoot and dodging olives that had fallen from the above trees.

We then rushed about showering, getting ready and packing everything up to check out on time and get the keys to our rental car.

We drove into town to finish paying for our meal the day before and then we were off to find our next hotel!

It was a half hour drive and we were sure we could make it without eating.
We should have known better 🙄
Ten minutes in we parked and began walking by restaurants, Mike suggesting we just look at people’s plates and decide by that on where we would eat 😋

‘The Ship Inn’ was chosen and we ate our pitas by the sea, enjoying every bite 😁

Kittens seem abundant here and this cutie was at home with his food and water bowl, on top of the fridge 😝

(No dad, that doesn’t mean he was probably the next meal 😏)

Once we were recharged we headed out to find Banana Beach 🍌🏖

We found it maybe 5 min. away and walked along the water a little, checking Sea-Doo prices for the next day and deciding we would rather spend 50€ on food then 15 minutes on a Sea-Doo😏
Food over fun 🍴 > 🚤

We left the beach and drove on, half sightseeing half looking for food.
Mike spotted a turtle rescue centre and stopped for me 😁
There were no sea turtles at the moment but there were 26, three week old tortoises😄🐢

We looked and looked for food, thinking the area we headed to would have more when in reality it had less so we turned around and headed back towards our villa.
There was a sign for a restaurant if you went down a side road so we turned there and thought we’d check it out.
It turned into a long, really steep, not so good road 😬
20 minutes mixed with sandy, rutted mountain roads and hunger felt like forever and it took us right over and across the peninsula.

The small road seen middle/left was almost at the restaurant parking.

( pen·in·su·la
pəˈninsələ/
noun
a piece of land almost surrounded by water or projecting out into a body of water.

But finally we made down the mountain side to the sea side restaurant called ‘Taverna Bel Mare’. 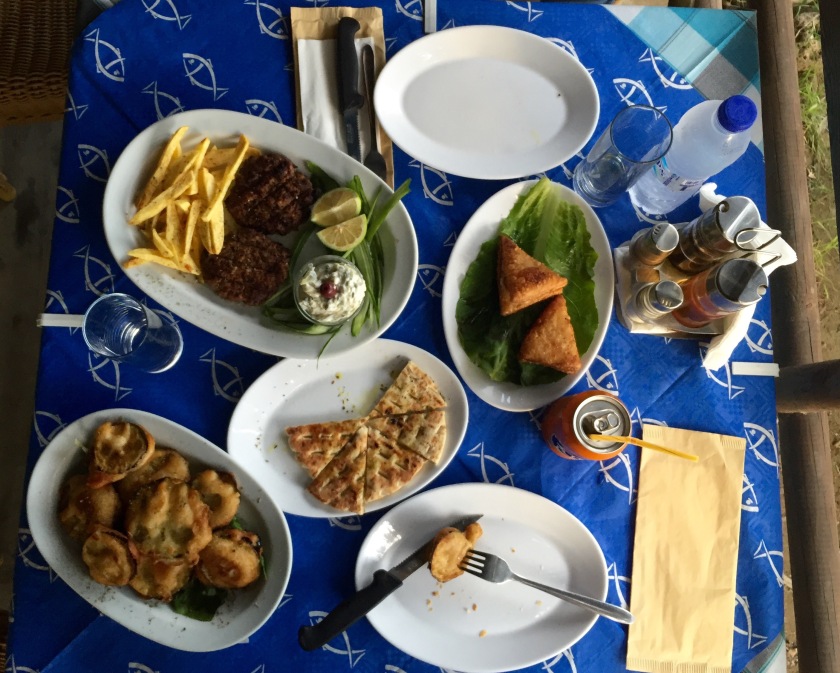 Prices here are crazy, it was a 20€ bill when we were all said and done and we got two appetizers, two drinks, one main, pita bread and dessert on the house 😳

After we finished eating we checked out the beach and watched a bit of the sunset. 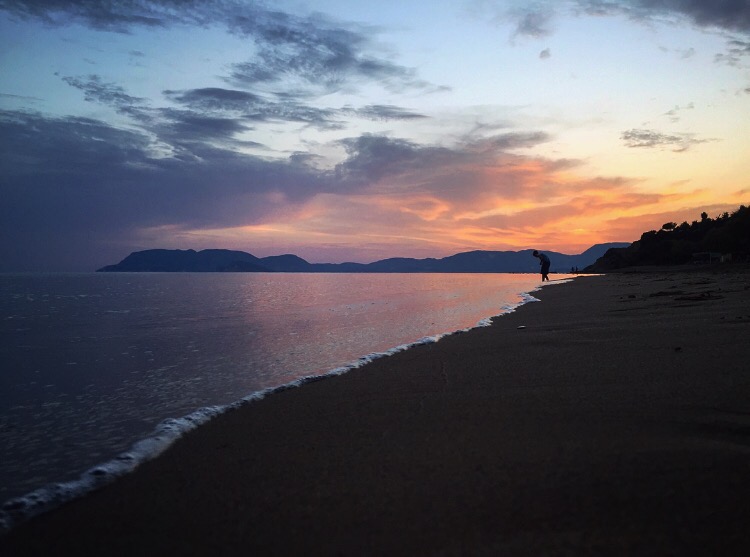 There were two turtle nests on the beach and that was kind of cool to see, even if they are no more then normal sand with sticks 😏😜🐢 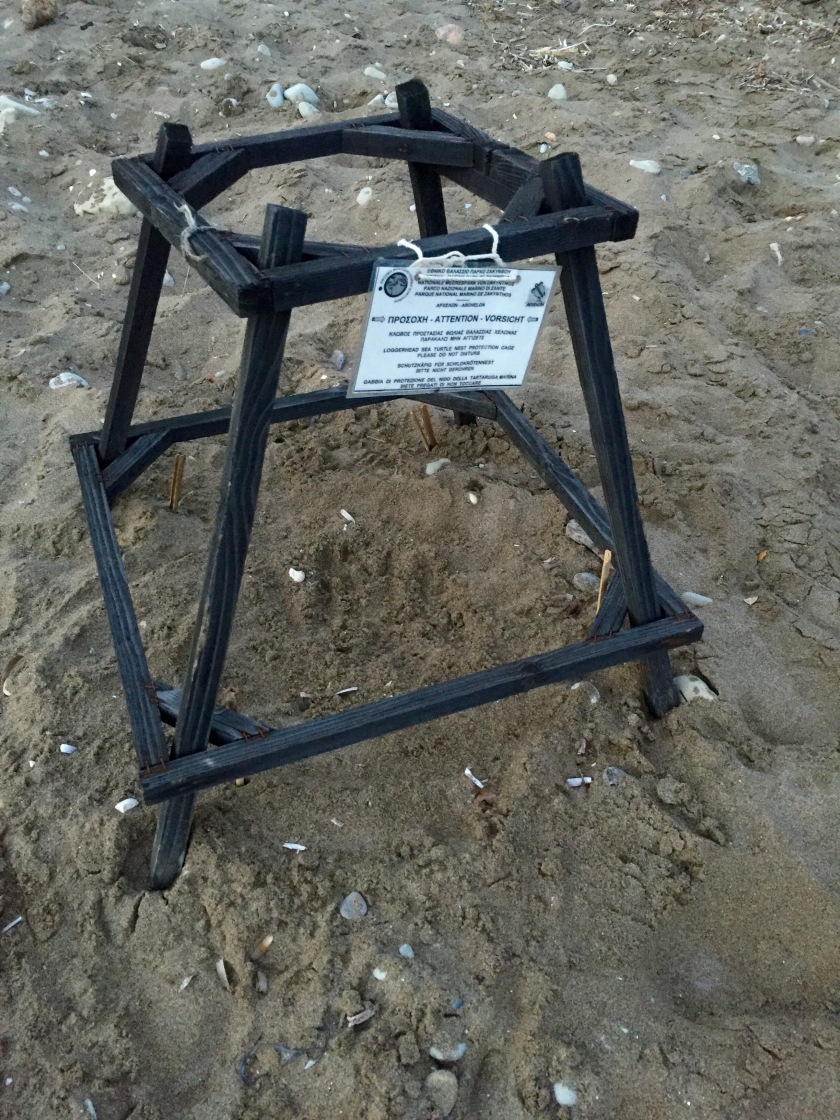 One thought on “Crossing O’re The Peninsula”