Church was instead attended in Holland and on the drive there Mike got me to scroll through the second-hand couch adds.
I came across one we had seen and liked a few days earlier but the sellers had never answered our calls/texts.
Mike tried again, they answered and a meeting time was set 👌🏻

We had to leave just before service ended to make it to their house in time to check it out.
They seemed, wealthy 😬
Their back yard having big, stone tiles going through the trimmed, maze like hedges, leading to their two separate seating areas amongst the garden.
Beside was their separate, fully windowed, gym.
Price of the couch was discussed on their stone deck, right next to their huge, wood slab table and matching bench 😏
They said money wasn’t really a concern (ya think? 😏😳🙄) so we got it for a great deal and half the distance away compared to any others we had looked at. 🛋

We drove back to John and Inge’s, getting Burger King on the way and then packing up some things to take over to the apartment.
Mike made coffee and dropped me off so he could go rent a trailer to haul back the couch.

I had a locked briefcase, trolley with items aboard, a coffee thermos and keys to take up in the elevator and it felt like a scene straight outta mission impossible 😜⌛️🗝🚪💼

(The briefcase was actually just a cutlery set)

I was supposed to hang out there and clean up a bit in prep for where the couch would go, but my mother distracted me and I ended up FaceTiming the fam. the entire time Mike was busy driving/loading/hauling the couch 😬

Now, previous to us even finding a couch I had questioned Mike how it was even possible to take a couch up to our apartment in the small elevator.
He ‘wisely’ told me that everyone had to get stuff up to their apartments so the elevator would be big enough and if not sometimes they opened up?

Anyways, can you guess what happened? 😎

I bet you guessed it fit perfectly and we went straight up within a matter of minutes!! 😏

The first piece of the couch went up without a problem and then time to manoeuvre the second part came.
It was a bit heavy for me to help much with and we thought it would JUST fit.
But one of the four sliding doors of the elevator juuust wouldn’t close.

We tried turning it, tilting it, squishing it and finally had no other option but try removing the railing and wooden seat in the back of the elevator to free up a few inches and hope it was enough. 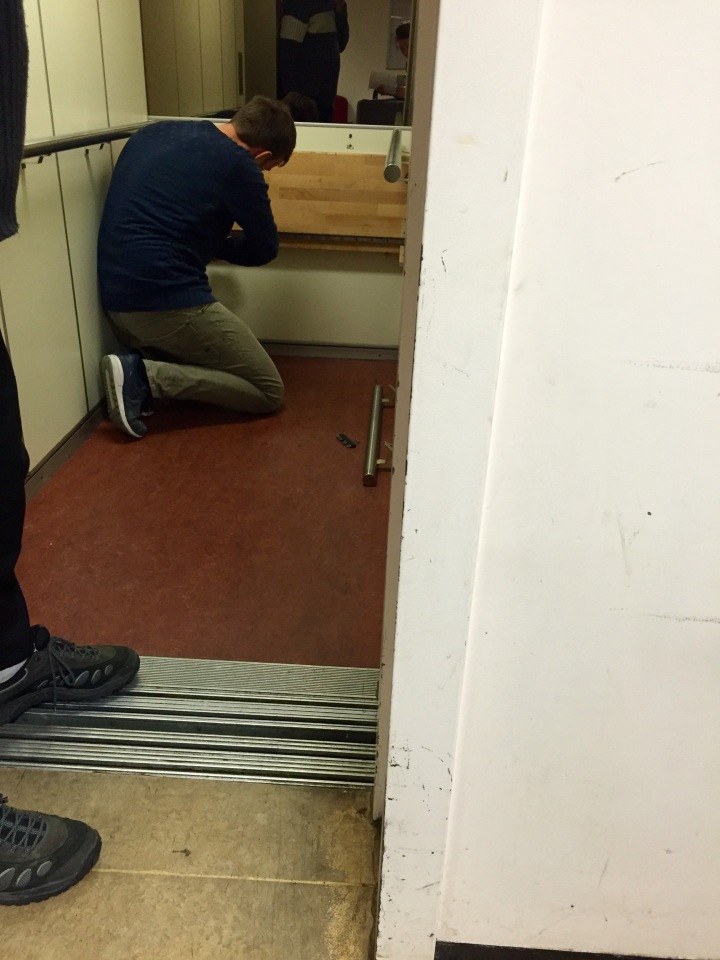 It was hardly enough but enough, I think the Lord just knew we couldn’t handle carrying it up 8 floors of stairs😝
I’m glad it was late so only two people seen us unscrewing the railing/seat and one was a nice older man who stuck around to help Mike carry the couch into our place once we got it up there 😁

A quick mop and then we arranged the couch in the corner where Mike again repeated how thrilled he was with it, for the 20th time 😉

Then I finally got to unwrap the pot set Sarah and Erwin had given us as a wedding present.
Mike read out loud to me what each one was for and I got to unwrap them and put them in the dishwasher 😏
They are pretty pots and the big one was sitting on the stove top and I told Mike it made me want to make a big thing of soup so Sarah, seems like you picked the right ones 😘

We unwrapped a few more things and then called it a night.

Though It was around quarter after ten, Inge had kindly heated us up some supper and set our places all nicely 😊🍴

I got to keep an eye on the girls Monday morning and while doing that I worked on the blog, there’s a lot more involved now that I actually have stuff to do outside of our vacations 😜

Mike had to work at the office so I got to start on packing up and sorting through our clothes and remaining items once my turn watching the little ladies was up.

Piling up summer items that won’t be needed, emptying cupboards and washing them out and doing up the bits of laundry all takes more time then one at first thinks but it was the perfect day to get it done.

Mike worked late-ish and then stopped at a different IKEA then we usually go to on his way home and he found us a mattress in the sale corner 👌🏻🛏
But because of that stop and then traffic he didn’t get back to the house until late so it was a long day for him.
But a profitable one for our future sleeps 😁