﻿
Thankfully our one suitcase was only a little bit over weight and they let it slip so that was nice😊
We had time until our flight so we shopped around a bit, finding our customary flying snack, chicken sushi 😜🍥

Then to Burger King for a pre boarding meal and onto the plane we went around noon, happy to finally be off to Canada!

🙄 A travellers day is never complete without some hitch in the plans.

First we were only slightly delayed from taking off by some passengers not having the correct papers, no biggy.
Then the fuelling machine broke annnnnd that took over an hour to figure out and fix and the hoped for, luxury length flight of 7.5 hours… was back to the normal (if not longer) ‘in plane’ time 🙄

Fiiiiiinally two hours later than it was supposed to be, we took off.
Knowing we would be missing our connecting flight in Toronto 😔

Oh, but the fun was not to stop there 😏

After eating my and most of Mikes airplane meal (he’s too high-class for such putrid fare 😏) it was a flight of normal flying woes. 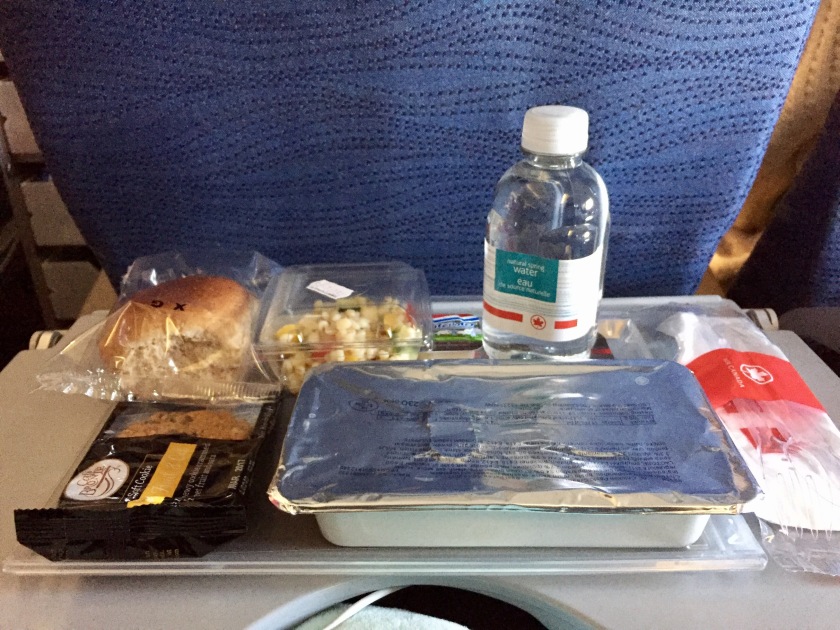 Discomfort and wishing for it to be over.

We landed in Toronto and had 4 hours of waiting to catch the next flight since we had missed our original connection.
A pita was eaten and eventually a Starbucks and coffee cake gotten later on by Mike. 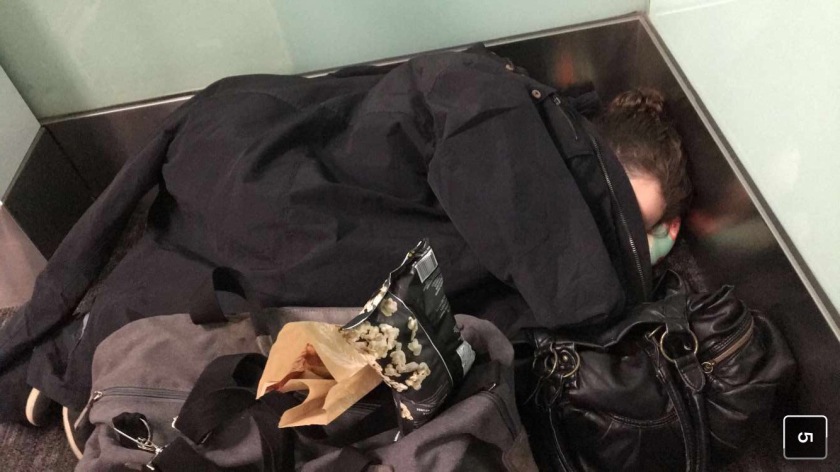 Finally it was time to finish the last leg of the journey… we went to our gate around 8:30pm but were delayed from boarding because a steward wasn’t there yet.
Once he arrived and everyone got loaded on we still couldn’t take off and we stayed sitting for over an hour on the tarmac, with no news given as to why we couldn’t yet fly.

The reason? Partially because of a maintenance issue but also because the caterers were late🙄
The caterers that were needed for the three people in first class who would be the only ones getting food on that flight😬

Three and a half hours passed by with a mix of uncomfortable sleep and trying to stay warm.

1:30 am… only 6 or so hours later than expected, we arrived, tired and saddened from that but also thankful for the safe travels that brought us to mother dear who was picking us up ❤️

(Air Canada… the perfect plane to take when you don’t want to get to whereyou’re  going.

Example: A work trip over the weekend? I suggest Air Canada, chances are you’ll never get there and maybe you’ll get a ten dollar voucher to eat a pleasant meal alone in an airport etc. 😏)

We went to bed around 4:00 am the previous night and slept hardily until 8:30.
Not long but restful, especially knowing a nap could be taken anytime throughout the upcoming day 😜

Mike made mom and I breakfast of fried ham and eggs.

The day was one of sitting, relaxing and catching up, as well as exploring my newly renovated home.
Having to relearn where everything was stored and what switches turn on what lights but the result of the renos was one pleasing to the eyes😊

Mom and I attempted to take naps and it went fairly well, for me.
Moms was a little bit interrupted by Mikes marker opening and closing in the kitchen since he had decided to test his drawing skills rather than nap 😜

Eventually dad returned from work and he brought our little nephew with him 😊
As expected Spencer did not feel the same affection towards me as I did to him but it didn’t take long, bribes work wonders😉
Though bribes weren’t on Mikes side 😜
It took until late in the evening and a trip to go see the kitty for Spencer to slightly warm up to uncle Mike, next visit should be a breeze😉

Nathin and Rebecca were seen once again as well and we had pizza for supper, supplied by Nathin 😊🍕

The jet lag was laying heavy throughout that day.
My eyes felt like they were glued halfway shut and more times than not I went to say or tell something and before it even had time to come out as words, it was gone as a thought 😬

3 thoughts on “Why Dost Thou Delay?!”