Get up. Go upstairs. Have coffee with Mom and Dad. Act like it’s a normal morning like any other.

But it’s not, it’s leaving day.

We didn’t have to leave for the airport until noon so we did have most of the morning together with everyone before we had to go face the packing.
Something Mike did most of 😘

Dad made everyone breakfast of eggs and ham, coffees all around ☕🍳🥐🍴 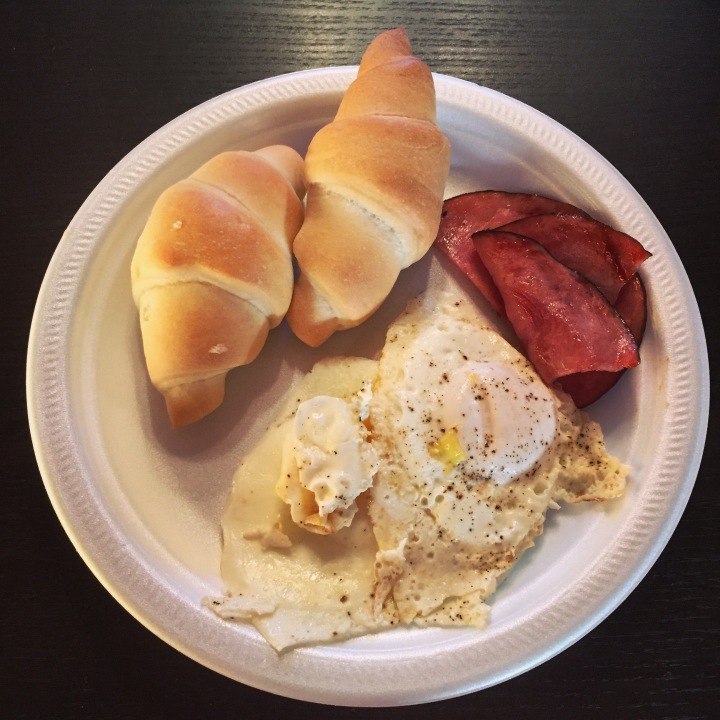 Our bags were full but mostly with air 😜

8 bags of Old Dutch salt and vinegar would be accompanying us back to Holland.
One does what one must to survive 😏

Mom got some flying snacks ready for us.
Going classic Canadian with Moose jerky and going homestyle with some of Moms homemade butter horns, personal messages included 😉🥐💕🖊

Josh was also flying out only an hour after us so when noon came the five of us headed to the airport.
Spreading out the tearful goodbyes all the more since we left ones at home.

Bags checked, gift shops browsed, time wasted… not wanting to say goodbye but not having anything left to say or do really before going through security.

One last photo taken with mom and dad before the flood of tears began.

And begin they did… as usual.
There was actually one girl in the security line behind us who was crying as well so we aren’t the only ones who have a hard time!
Though rarely or if ever, have we seen anyone else at the airports crying like we all do.
Guess we love each other more 😏😜

It was nice having Josh to sit and enjoy Tim Hortons with upstairs once the final waves were given to Mom and Dad below and then it was time for our goodbye to him as well.

Before boarding our plane we seen a couple we knew who were flying to Toronto as well and we said we’d meet up after the flight if layovers allowed.

My usual ‘sleep during take off and not anymore after that’ happened and I wanted to save any interesting looking movies for the long flight so I passed it in relative nothingness, across the aisle from Mike 😏

Once we got to Toronto we passed much of our hour-long layover chatting with the couple and then quickly getting a Starbucks before boarding for Amsterdam.

It was a blessing to have the flights all on time and everything, just really wish it could happen when your trying to GET somewhere, not when your going BACK 😏😜

Blame the extra shot of espresso pre flight or whatever you want, but in my opinion a full sleeping pill should have at least some effect on a person 🙄

Not this person though… someday maybe I’ll find a magic med that lets me sleep away flights but until then it was a disappointing one for me.

The movies I had opted against watching on the short flight weren’t on the big, long flight and the meal was even lamer than usual 😔

Time zones changed, morning came and the fog was so heavy that just before the actual landing we didn’t realize we were that near the ground yet.

No worries, turns out it was the training area ✈️🔥👌🏻

Jesse drove our car to the airport to pick us up and I immediately fell asleep and did so until we got to the apartment.
A quick drop off of the suitcases and then we popped over to the grocery store for some necessities.
Like the toilet paper we hadn’t gotten just prior to us leaving 😜

Nap time came and with it the restful slumber of a traveler.
Until the alarm went off and we had to get up so we could hopefully sleep that night 😬

Mike fried us up some pork schnitzel and we watched a Fixer Upper, vegged out on higher speed Internet then we’d had for weeks and just chilled until we could go to bed again 😜