Due to some complications with the person trying to buy our apartment, we allowed another looker to come just in case they would be ready finically, sooner.

That being said, the apartment needed cleaning 😬

Our morning passed by doing that and getting ourselves ready to head out come viewing time.

Mike had found a second hand store to take us to and he was more excited about the treasures hiding then Mom and I.
The two of us, hardly being able to look at the one shelf in front of us without Mike calling us from another area of the store, trying to show us something else he’d discovered 😋

We did find some things though and for a second hand stop, it was a pretty good haul.
Mom finding a pair of new ankle boots (which I greatly envied) and me finding two cute cups I shall use for espresso, a pewter dish for flower arrangements/fruit bowl etc. (not the lightest item to add to the move🙈) and some jars for an upcoming batch of wine jelly 👌🏻 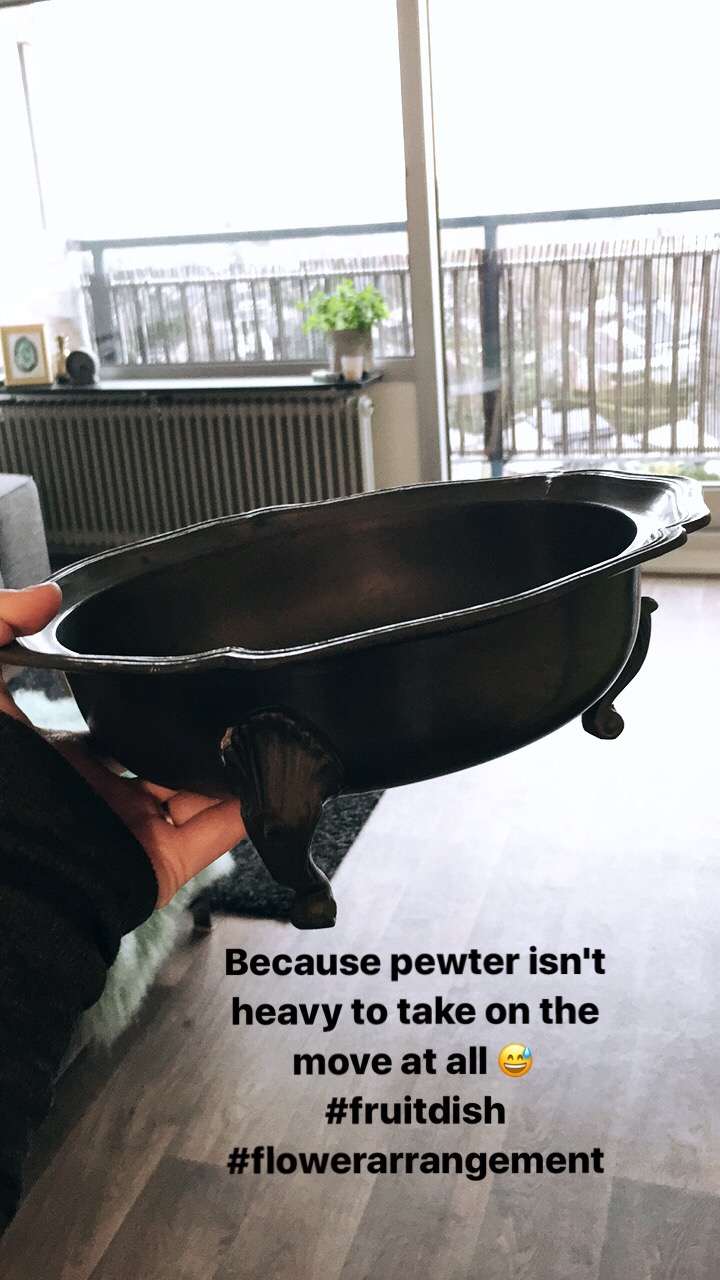 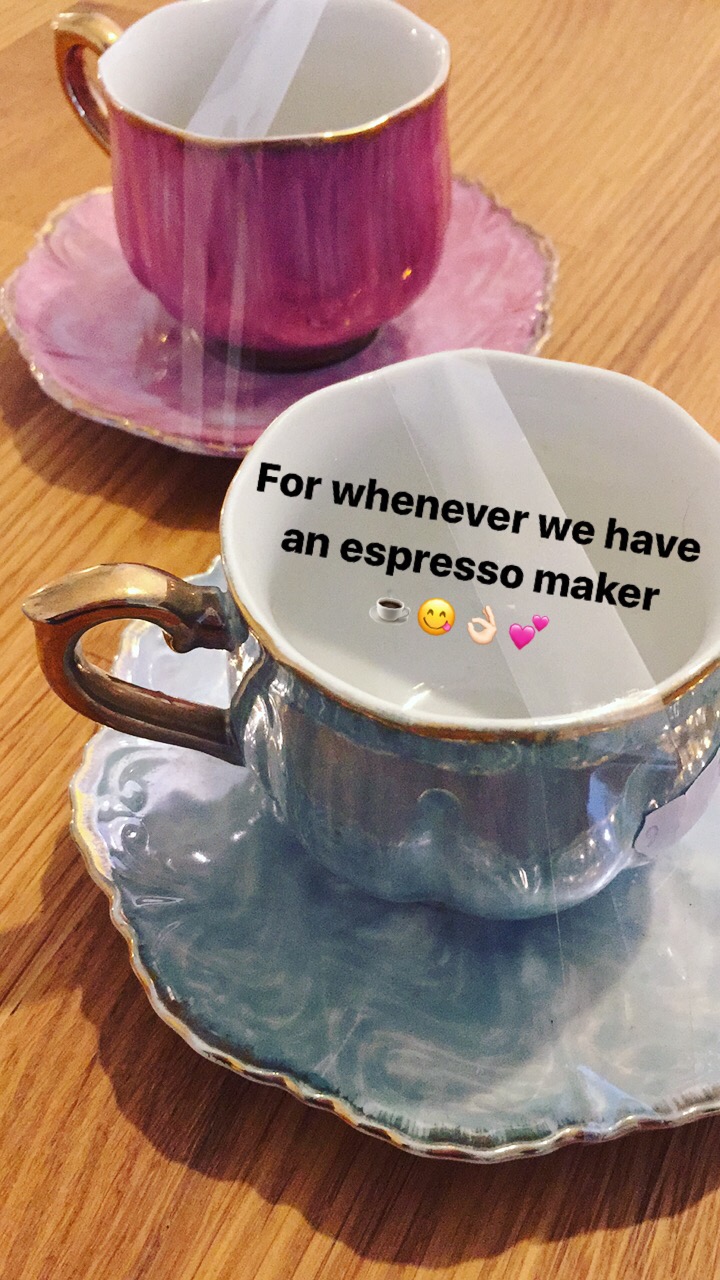 From there we went to explore a couple of stores where I usually find things I like, so I wanted Mom to see where I had done much of my apartment decor shopping.

We went, we saw, we left 😏😊
Nice things were seen but as it often is, the budget and suitcases are too small to accommodate our wishes 😔

Mike drove us to one more, second hand store and it’s a good thing we found things at the first one, because the second was more like one of those places you’re afraid to go into after only opening the front door as the floor rises and falls beneath your feet and the strange smells invade your nose.
Where if you touch one thing, you leave feeling like a shower would be the most effective way to rid yourself of the stores memories 😋🙈

We retreated back to the comfort of the apartment after that, where Mother helped me make some Italian wedding soup.
She’s such a skilled veggie chopper 🥗🔪
So quick, clean and proficient 😏

Pro had found the ~ recipe ~ online and given it her stamp of approval, so we waited in anticipation for its completion.
But before that would happen, we had to prepare the cutest little meatballs ever 😁

The soup simmered away, allowing the seasonings to blend and giving Mom and I time to begin packing for our trip to Malta the next morning💼👜👗👔👟👚

Mom made some cheese melts to go with the soup she dished up for us all and it was indeed a tasty one, even without the garlic I forgot to add 😬🍵 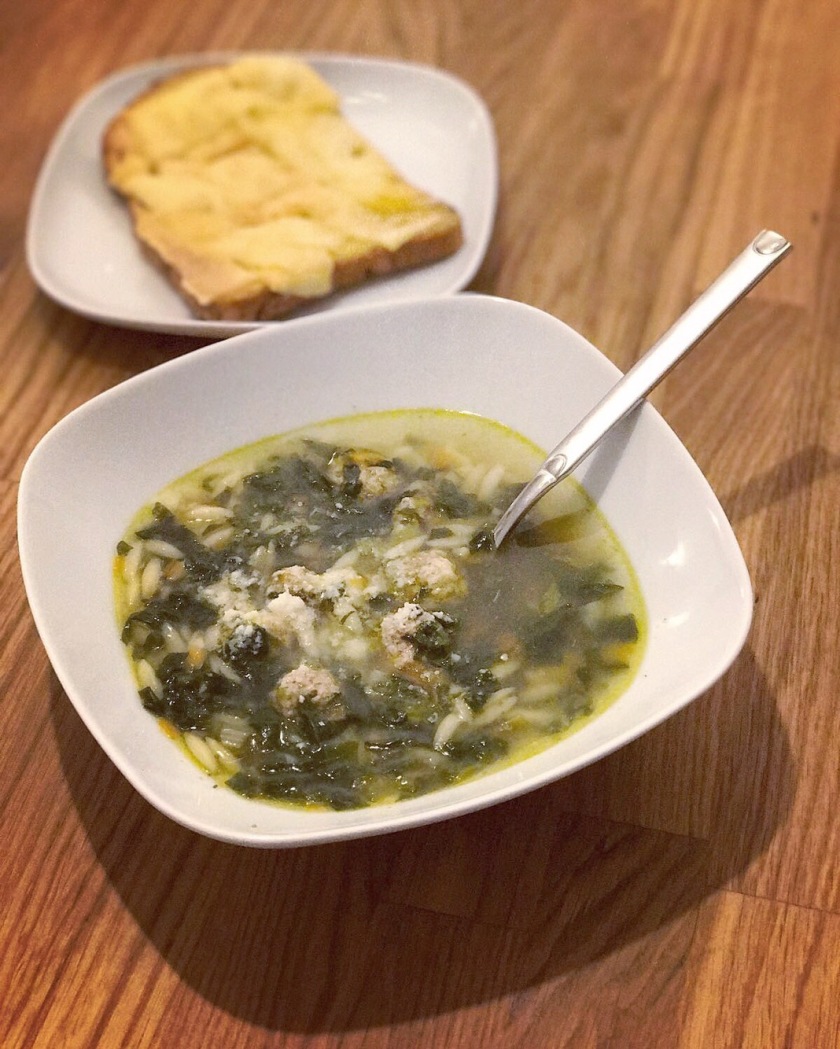 (Sorry the soup looks like it’s spilling. It’s harder to take a picture of soup in a rounded, square bowl then you may think 😏)

The rest of our night was spent with a mixture of packing, laundry, writing, packing, preparing, eating up food that wouldn’t last over the next four days etc.

We left the apartment around 8:30 am, packed and ready to go.
Hoping we had prepared enough for the slightly unpredictable weather we were going to face in Malta.
About one hour later our car was parked, shuttle taken and the airport in Eindhoven arrived at.

After the usual pre flight tasks, we stood in the line up for Starbucks and then glanced around a little store for some ‘in flight’ snacks since that is something the budget airline of Ryanair does not include 😏 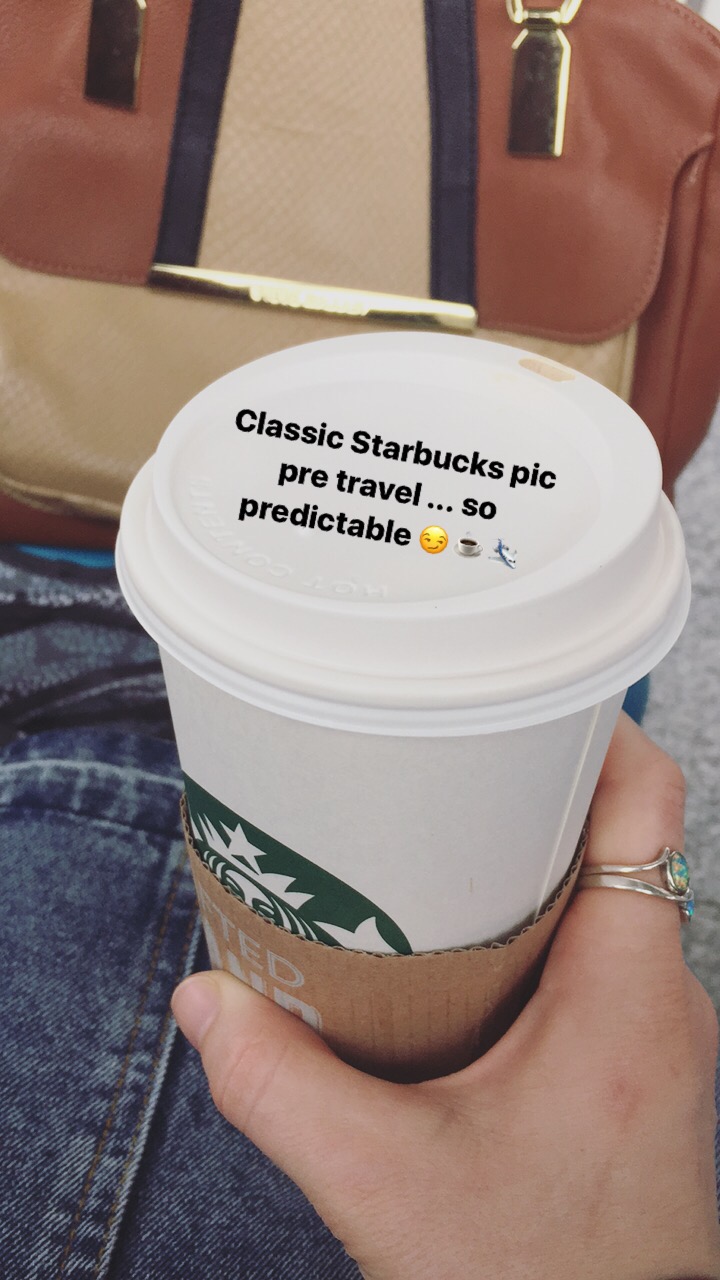 Our coffees were sipped and a variety of different chairs sat in whilst waiting to board our flight.

It was an uneventful 3 hour flight but near the end, Mikes excitement/boredom was pooling out in words to either mom or I, depending whom he could get to listen more 😜

(He had been to Malta before, so he was excitedly trying to point out places he’d been to, but with his head and hand in the way of the window, we missed every one😏) 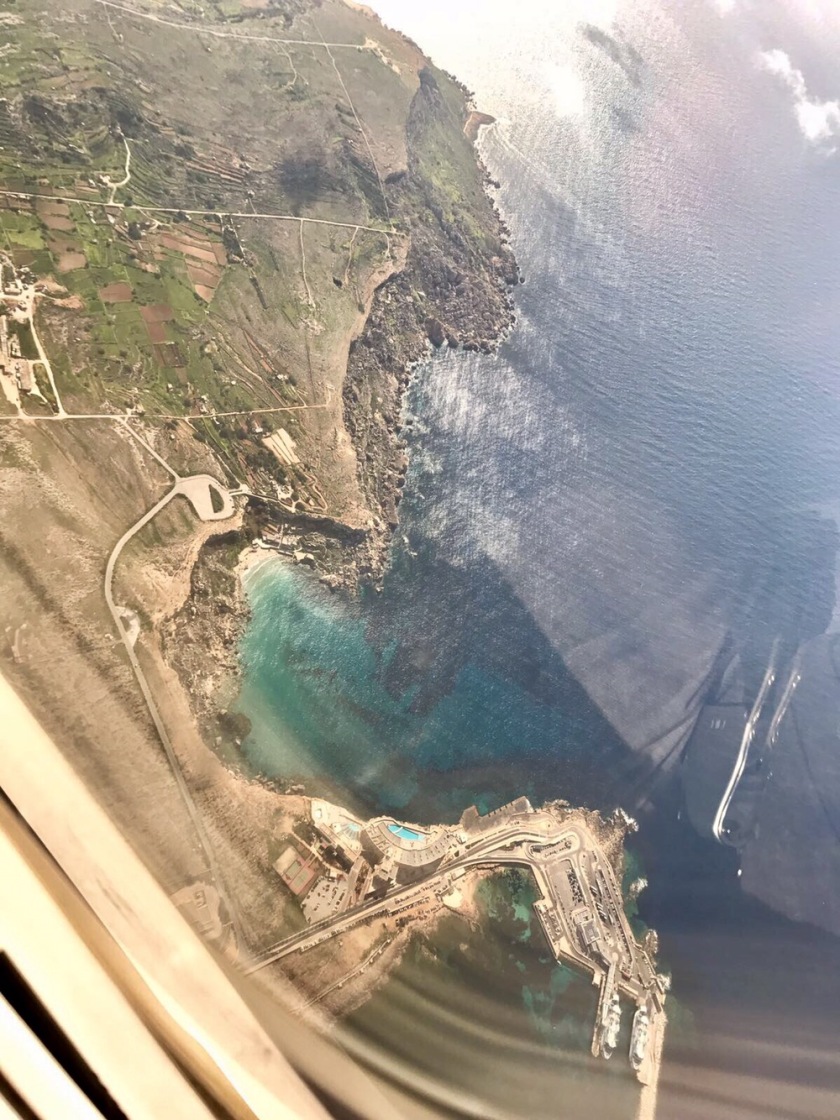 We landed and Mike went ahead to get the car rental started and Mom and I waited on the bags.
Our first steps out into the open air, we were met with a warm wind and sunshine 🌤
The rental was inspected and one thing immediately apparent.
The steering wheel was in the wrong place 😏

They drive on the opposite side of the road here, thus the wheel was on the right side of the car.

We drove off, in search of a grocery store and a then the ferry that would take us over to Gozo.

Before we found either of those places though, a fruit and veggie truck was stopped at. 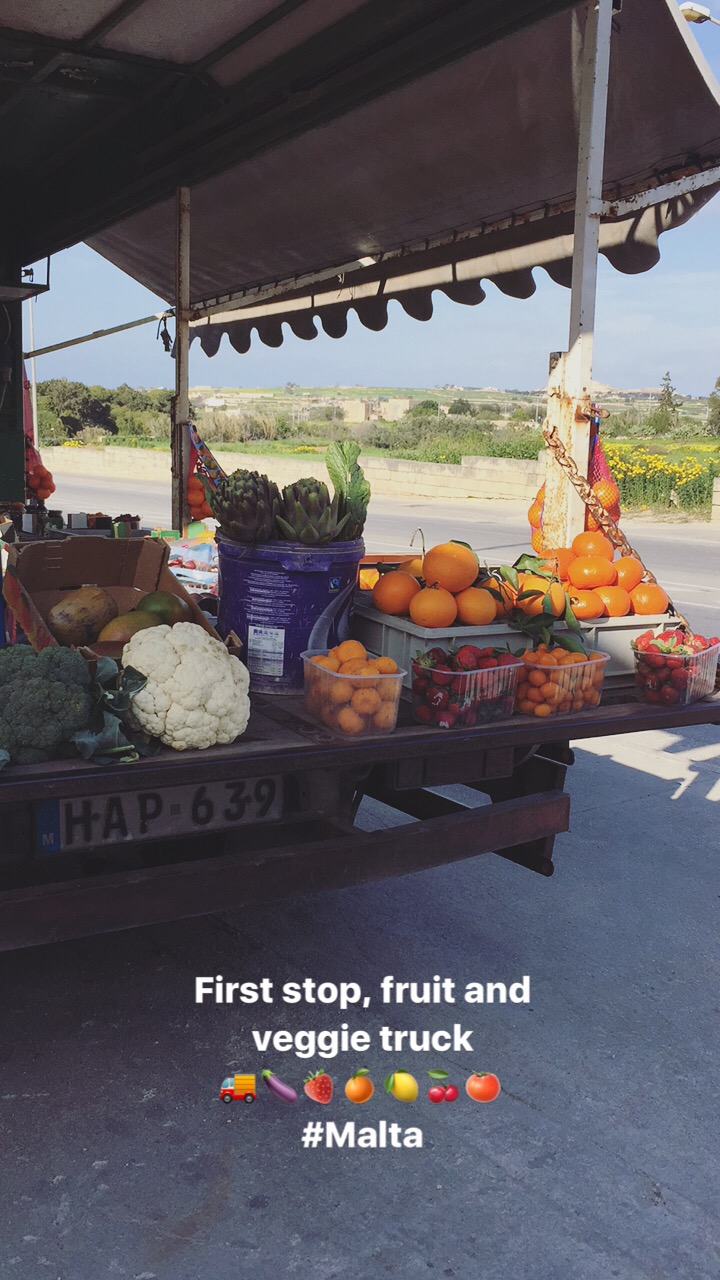 A grocery store was required as the ‘surprise’ house we were to stay at needed some food supplies supposedly, so we stopped at one and found the prices to be a tad higher then we are used to.

To the ferry, where we parked the car and walked out to find a sunny/non windy area to sit out the 15 minute or so boat ride over to Gozo.

The houses are pretty much all variations of tans, so much so, that I said it felt like we were driving in a sepia picture 😋 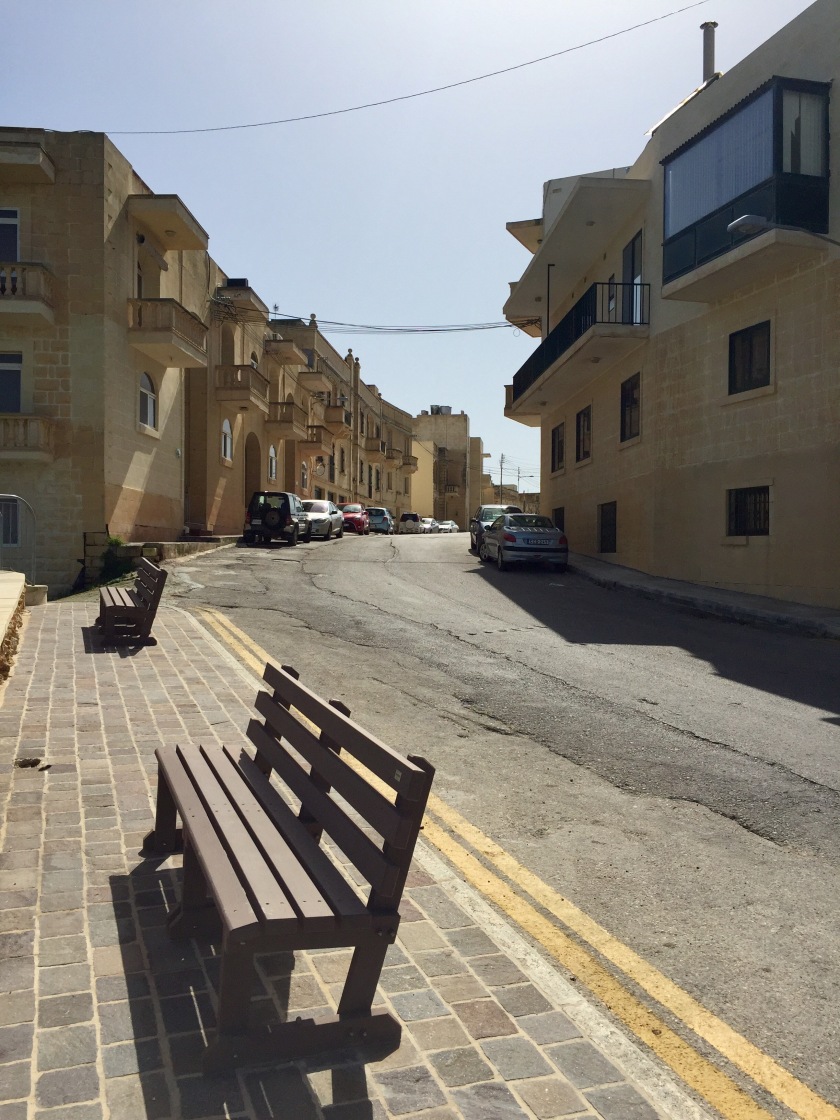 We finally got to our apartment and Mikes planned surprise was finally shown as we took an elevator up to ‘ The Penthouse‘.

An impressive place (much to large for just three people) was show to us by a friendly Laura, The Penthouse owners daughter. 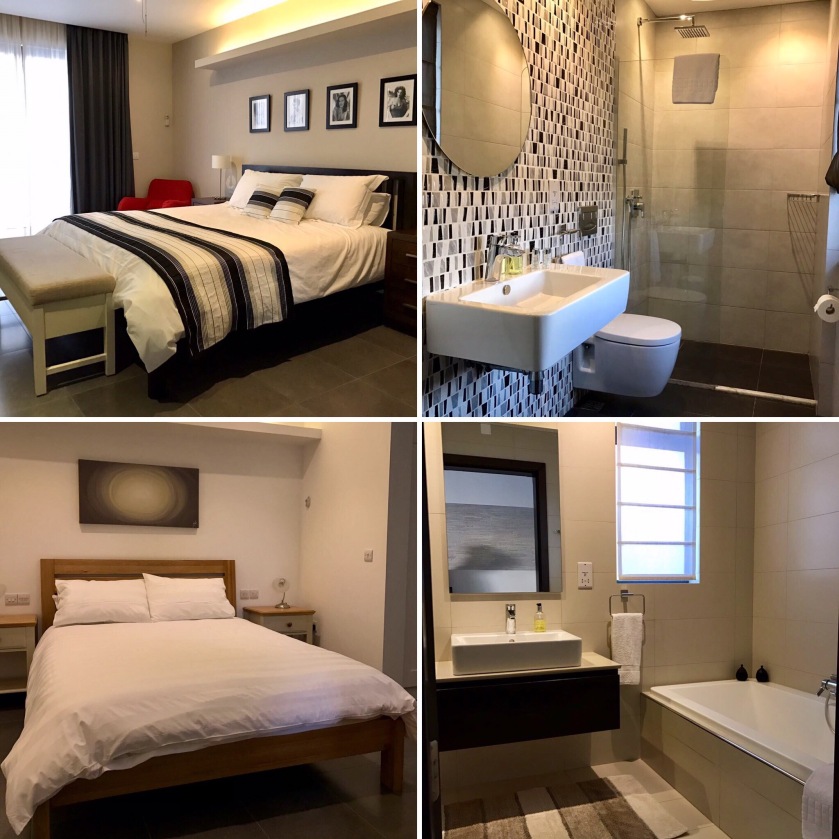 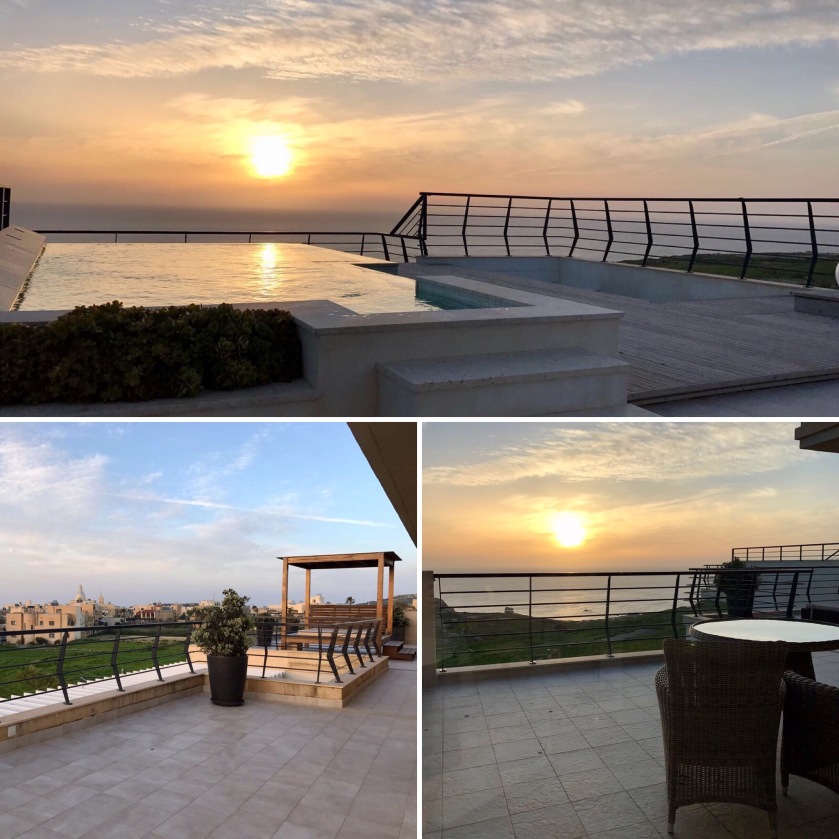 We wandered around after she left, exploring our new living quarters and hoping the heating would kick in quickly because we were literally shivering inside… and outside a gusting of cold wind fresh off the ocean was making it equally shiver worthy 😬😜 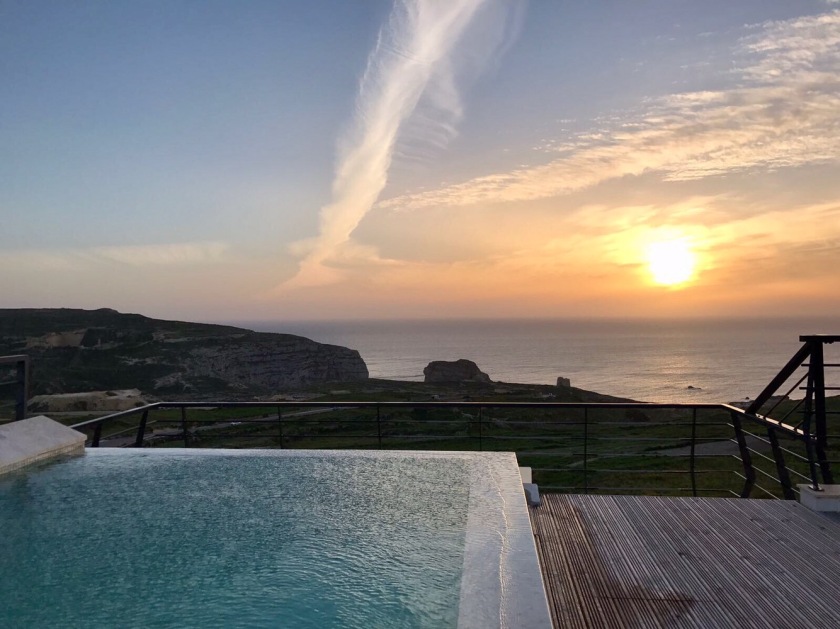 The decision to go find supper was one made quickly and after a quick ask for suggestions from the owners, we drove to ‘Rangers’ in the town of Gharb.

It smelt like a barn inside the cold little restaurant.
Not the best, first observation 😏
Menu’s perused, orders taken, plates received, food tested and food not really enjoyed 😜 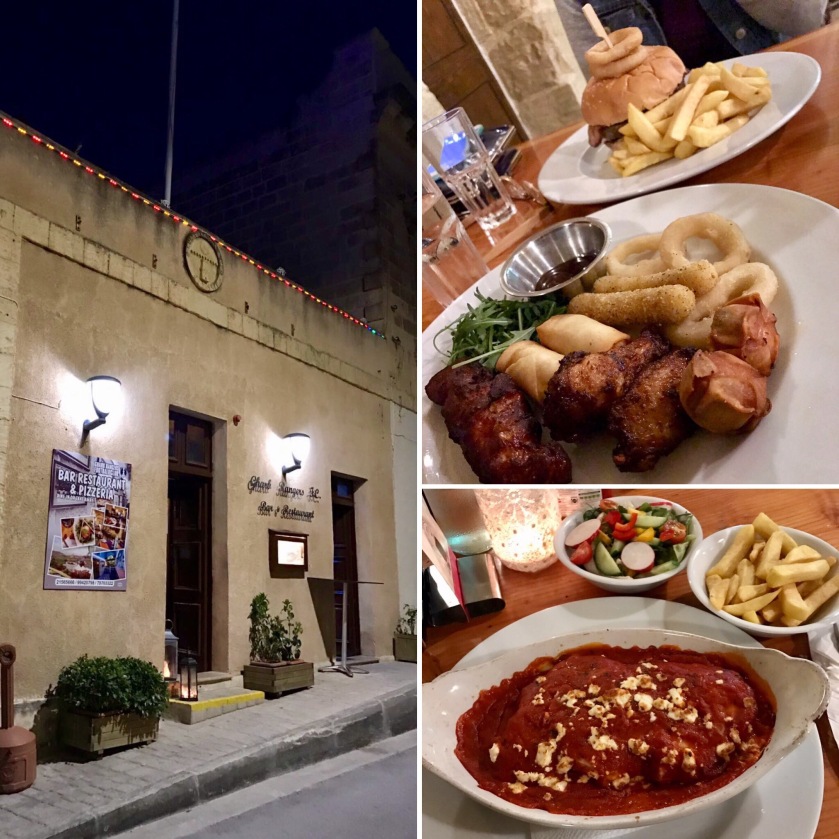 Mikes was probably the best but also the smallest meal, holding a small sampling of chicken wings, mozzarella sticks and spring rolls.
Moms burger had a rather odd flavour and though the sauce on my dish was good, my chicken was such a bad texture, that while cutting it with my steak knife I had to pause and see if it was chicken with bones because I couldn’t cut through it.
It was boneless 😳

We didn’t leave thrilled but we didn’t really leave hungry either so, it probably could have been worse 😏

Back up at the penthouse, Mom found some packets of instant coffee and I eagerly awaited their brewing 😬
Once we had the warm coffee cups in hand we bundled in blankets and sweaters upon the couches.
The heating had not turned on correctly and even our noises were cold 😜

After some drawing, post travel resting and as much shivering as we could handle, bedtime called to us 😊