Unfortunately I couldn’t sleep in for some reason, so I tried to catch up on blogging while the other two slept.

I began hearing noises from their rooms and I couldn’t leave my morning, coffee-less, any longer (we have a loud coffee grinder so I didn’t want to wake them) so some was brewed and soon shared with them ☕️☕️☕️

Mom and I had #AlphaGetToKnowMe prompts to catch up on writing/illustrating so our morning/afternoon was spent with a fair bit of that.
For those of you who aren’t sure what that means, check out my ‘Instagram’ or wait for a later post explaining it better ☺️

I ALMOST napped, but I didn’t… so I’m considering nap rehab I guess 😋
Instead I made lunch for Mom and I and Mike had some leftovers. 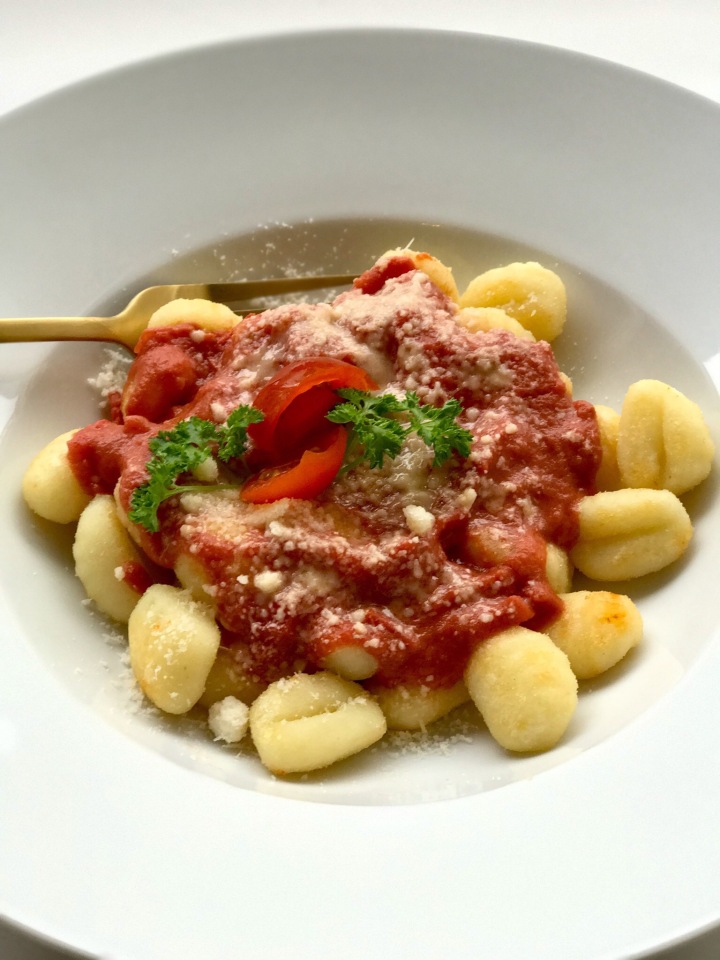 My new favourite way to cook Gnocchi, fried, joined by some canned sauce with a few other random stuff things thrown in 👌🏻🍴

Mike left to go do some things and I began making a large pot of soup, having fridge and freezer ingredients to start using up as much as possible before we leave for South Africa.

Farmers sausage from Canada was fried up and ALMOST thrown into the pot but after a warning from Mother about a slightly off smell, it was tasted… and thrown out 😏
Farmers sausage pack #2 was thawed and fried and found to be much better tasting 😬👌🏻

I knew Mom may enjoy watching Hidden Figures, (the movie about the women behind the Nasa program) so I turned that on and we half watched/half drew/did laundry etc. while it was playing. 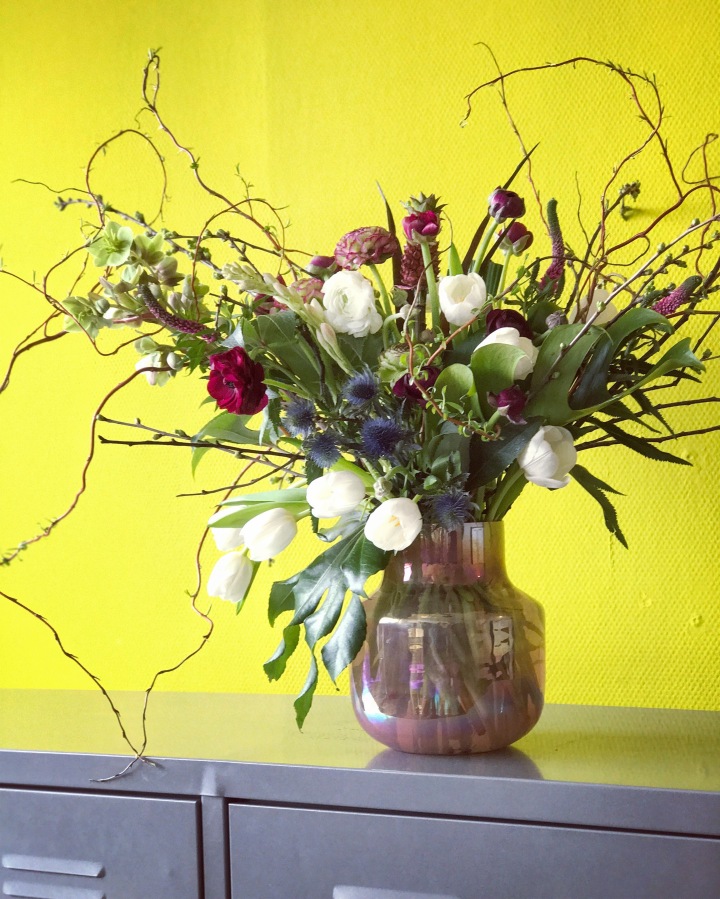 After Mike had returned and all of our bellies grew hungry, beef barley soup and cheese melts were heated up and eaten while watching a ‘Fixer Upper’ episode. 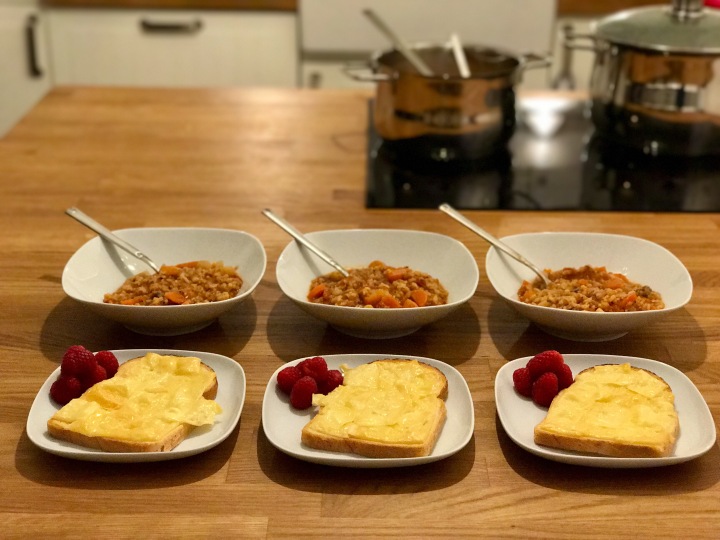 Mike had to go out again that evening, so Mom and my time was spent preparing for the upcoming early morning of exploring Amsterdam and area.

Up at 5:00 am to get ready and head towards Amsterdam.
Why you ask?
Well to see flowers being auctioned of course 💁🏻😜

Mom hadn’t made it to see the flower auction during her last trip so this time it was on the wish list.

We arrived at ‘Flora Holland’ around 7:15 am or so and bought our tickets to go watch the goings on of a flower receiving and shipping warehouse.
I expected it to be semi interesting, but I didn’t expect the drivers of the little flower carts to be so busy and driving so quickly between one another! 🐝🍃

We passed by the auction room, where bidders were seated behind laptops and watching an auction clock intently on the large screen in the front of the room, raising the price by a few cents per stem/per second.

They had quality control rooms set up, testing how long the flowers lasted and all that good stuff. 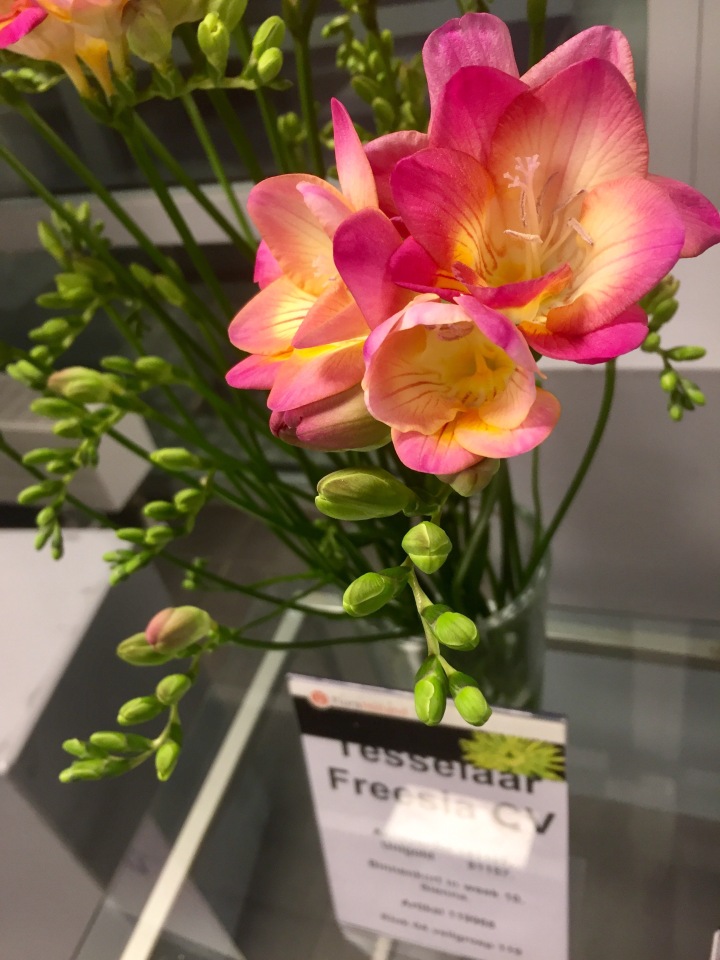 It did smell good in there, all the fresh flowers and greenery lending an aromatic aspect to the overall tour 🌿🌷🌸🌾

We left with a hunger in our bellies.
Breakfast is a hardly, if ever, meal that Dutch would eat out in a restaurant, so it’s a tad tricky finding a place serving a good breakfast that’s open early and not more of a brunch time.
Mom recalled the ‘paling’ she and Dad had tried during their last trip ( smoked eel 😬🙈) and asked if it was in the area.
It was and it sounded good to all, so that’s where we went 😋
To ‘G. Eveleens‘ the smelly fish shop along the waterside, with scary green wall tiles, old fishing photos and hard little wooden chairs.
We ate our smoked eel sandwiches on warm, homemade bun and enjoyed it. 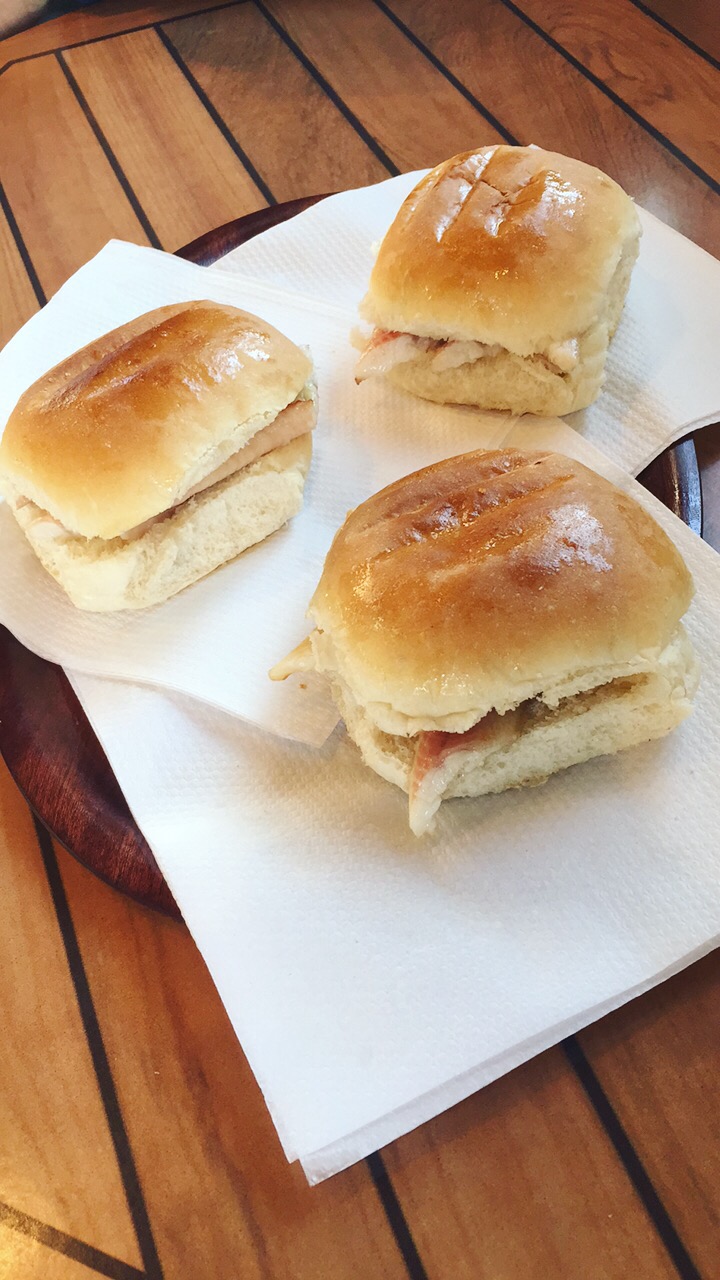 Minus the description and picturing the monstrous eels from The Little Mermaid, which these are not. These are quiet little and they really do taste good! 👌🏻 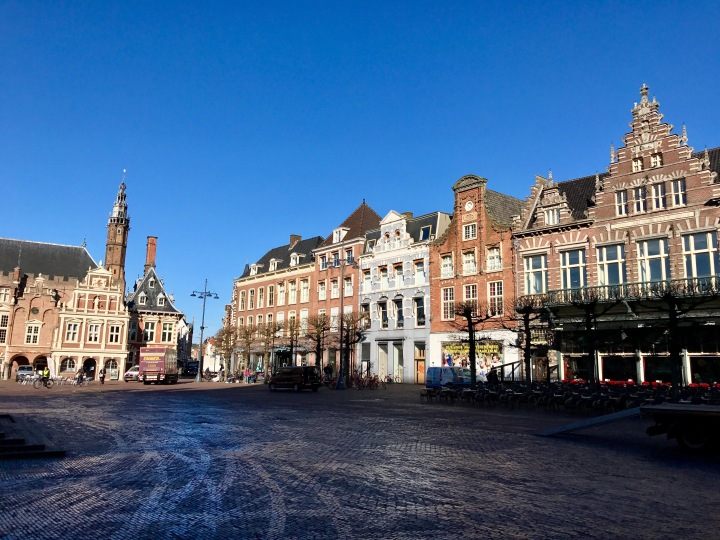 Mike drove us to Haarlem and we walked along the street, looking through a few of the shops that were just opening and then showing Mom ‘St. Bavo’s’, where Mozart had played during 1766, when he was just 10. 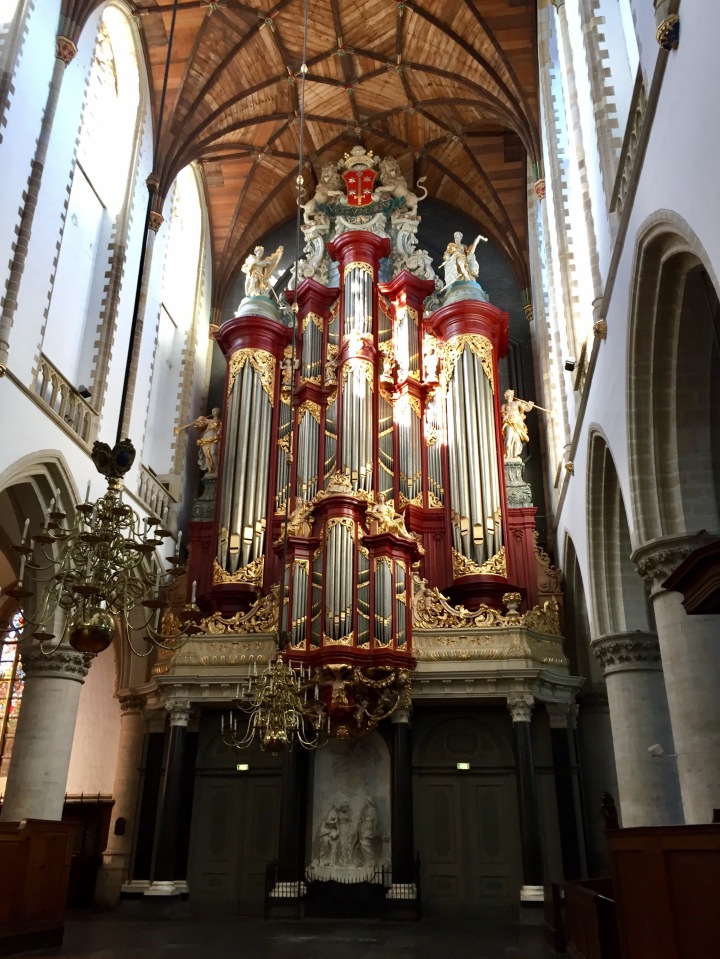 I’d been there before, but I think you’d be able to go multiple times and still see new details.
How they thought to build and incorporate so much detail, never fails to astonish me.

We needed a snack before taking Mom to the Corrie ten Boom house for a tour, so we went into a bakery and got some goodies. 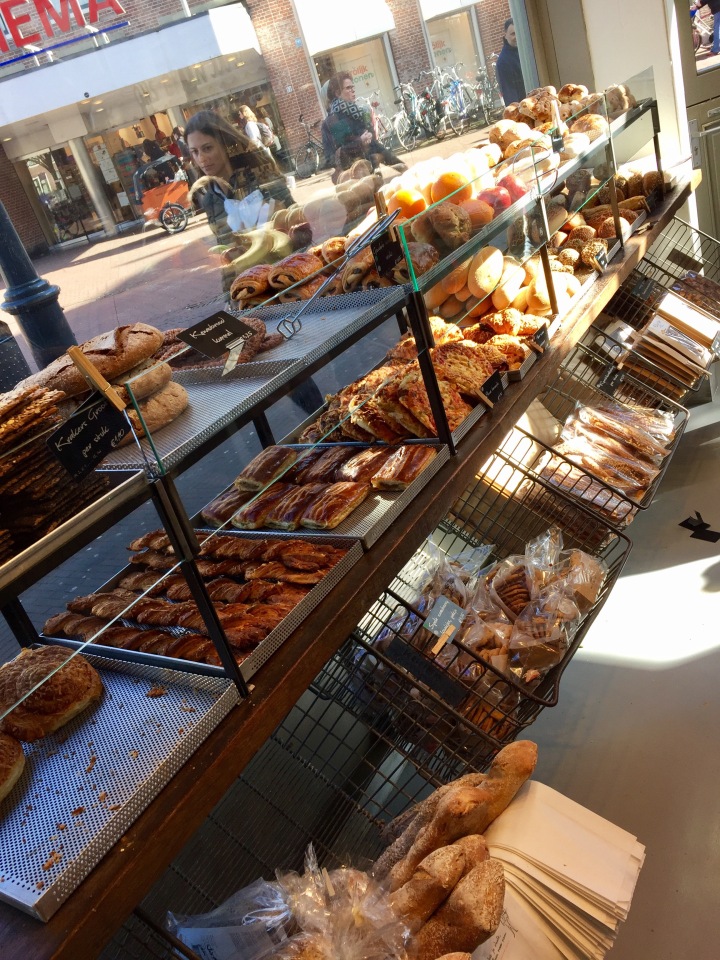 While Mom took the tour, Mike and I walked around a little, checking out some more stores and then just standing in the sunshine, soaking it all up and enjoying is warmth immensely while people watching ☀️ 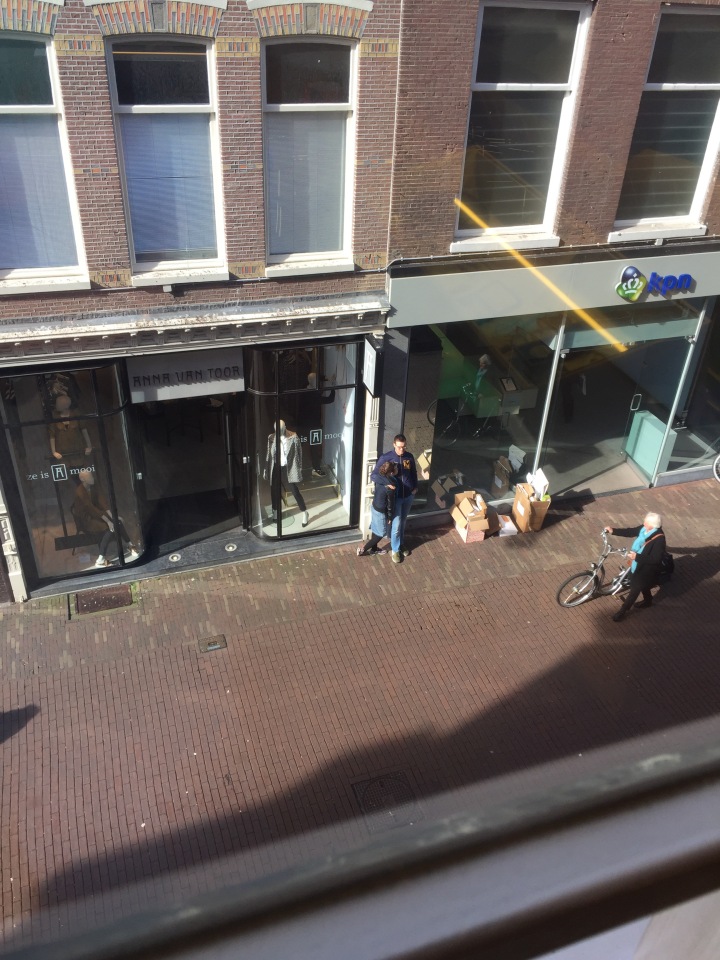 She snapped this picture of us from inside the house 😋

Her tour done, we continued on.
Looking through windows and stores, cheese store included 👌🏻🧀 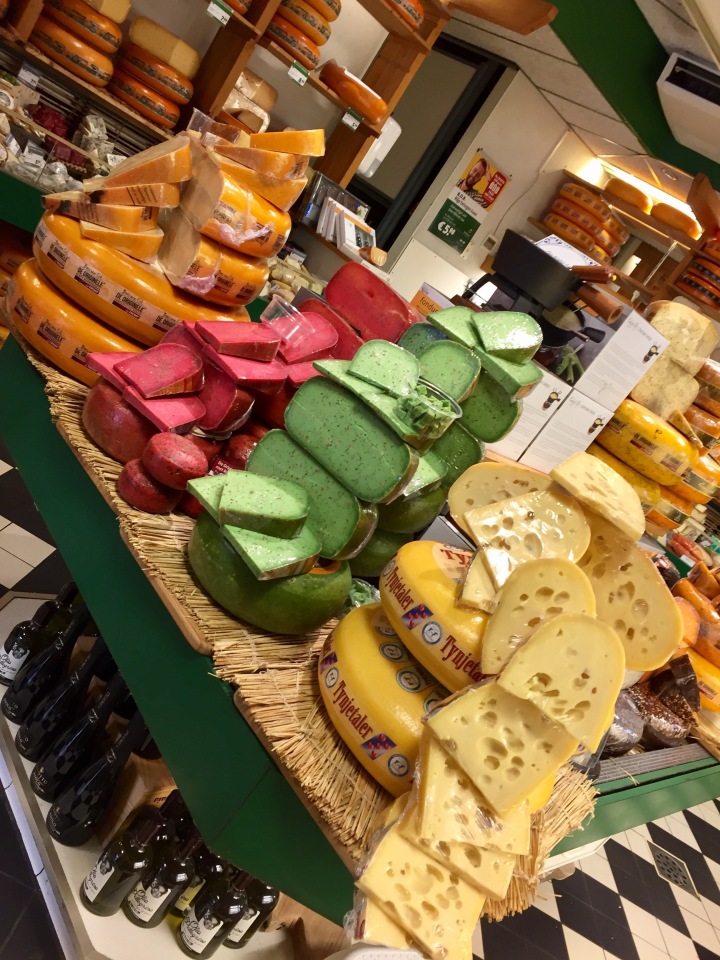 Cheese samples not being enough, we then looked for a place to grab a bite to eat.
Pretty much the first restaurant we seen was the place we chose, sitting down by the window we waited for a server.
Mike said we should go sit on the other side of the restaurant because it seemed ‘cozier’… turns out he just meant dark 🙄 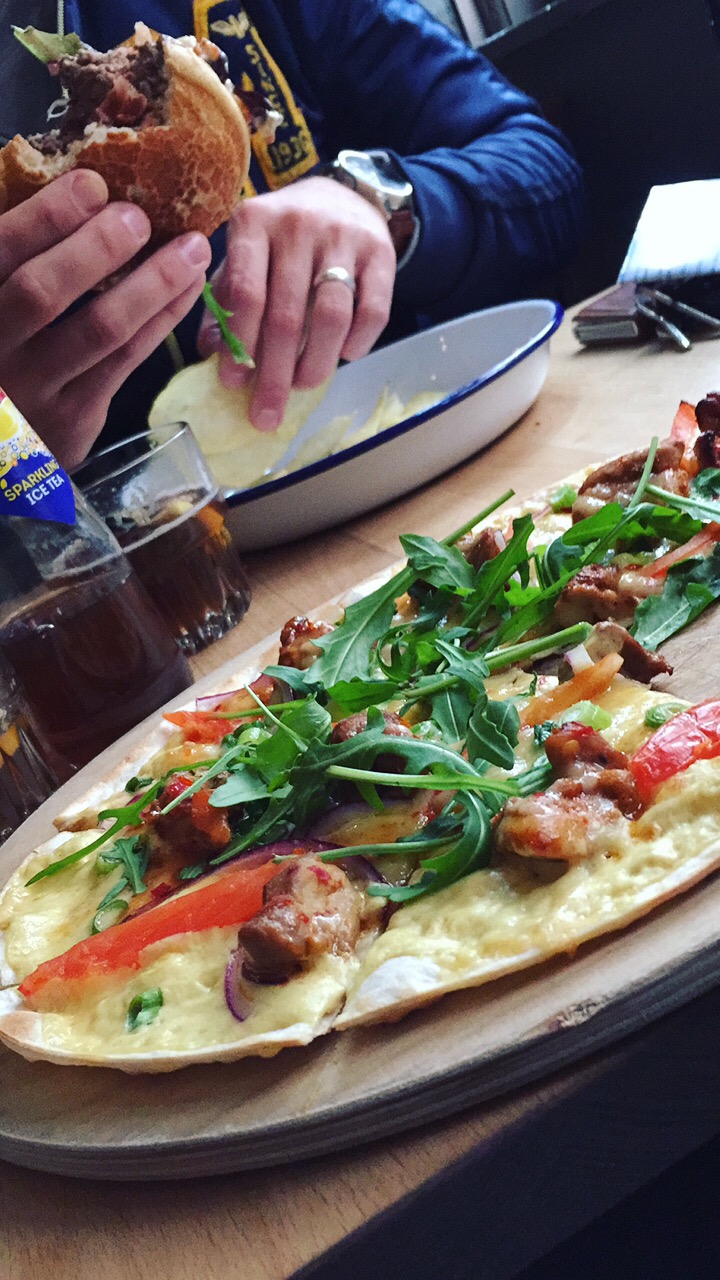 Before leaving for ‘Kasteel De Haar’, macaroons had to be bought, as no trip to Amsterdam area is complete for us now, unless we get Tout macaroons 💕

‘Castle De Haar‘ was reached and we began the exploration of the humble, 200 room, 30 bathroom, summer vacation house, owned by Thierry van Zuylen van Nyevelt van de Haar.    Can you just imagine hearing your mother call you by your full name when you had misbehaved? Doubtful he ever did 😏 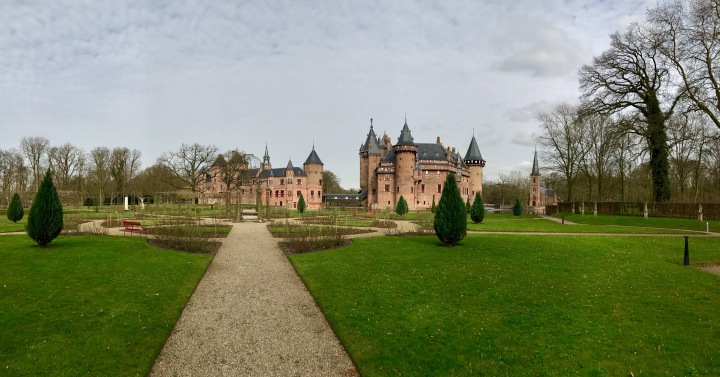 Ruins which had been restored, for family honours sake and so they could live there for a few weeks out of the year, when they weren’t in their Paris or Italy homes 😏
Built specially to host guests, it was equipped with finery unlike anything else at that time.
Boasting of cold and hot running water, floor heating, air conditioning, an elevator and even electricity. 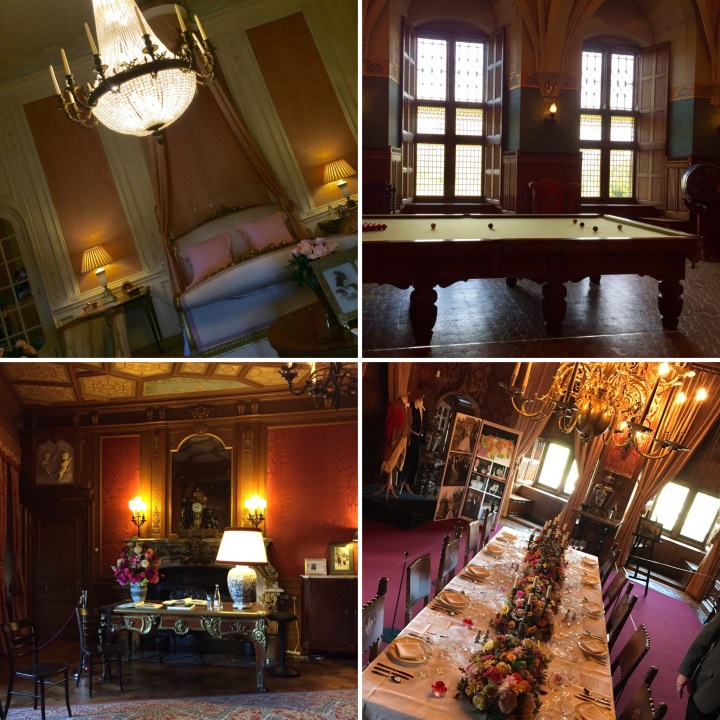 We walked throughout the castle in awe, as it was once again a place of incredible detail and wealth.

Though not all details were pretty ones 😜

Tour guides waited in rooms, willing to answer any questions and to tell a little information about the room if you were interested and that was a very nice feature 👌🏻

Entry fee was a tad pricey but it was one of the most pleasant to explore castles I’ve been in.
Allowing you to see multiple different rooms and having the option of reading the information or having it told to you, but not having to be led around in a group with one guide. I can also imagine the gardens are an impressive feature during the later spring and summer months.

The castle was still in use up until 2005 and even now the remaining family can use the separate, four wing castle, whenever they please, as a stipulation of the last owner when he donated the castle and grounds to the foundation he created.

We left there with dreams of grandeur and also disbelief how one family can have so much wealth and own so much to use a few weeks every year.

We had a quick Starbucks pit stop during the drive back to the apartment and I tried a lemon refresher made with coconut milk, due to my sisters recommendation, and now I too recommend it🍹 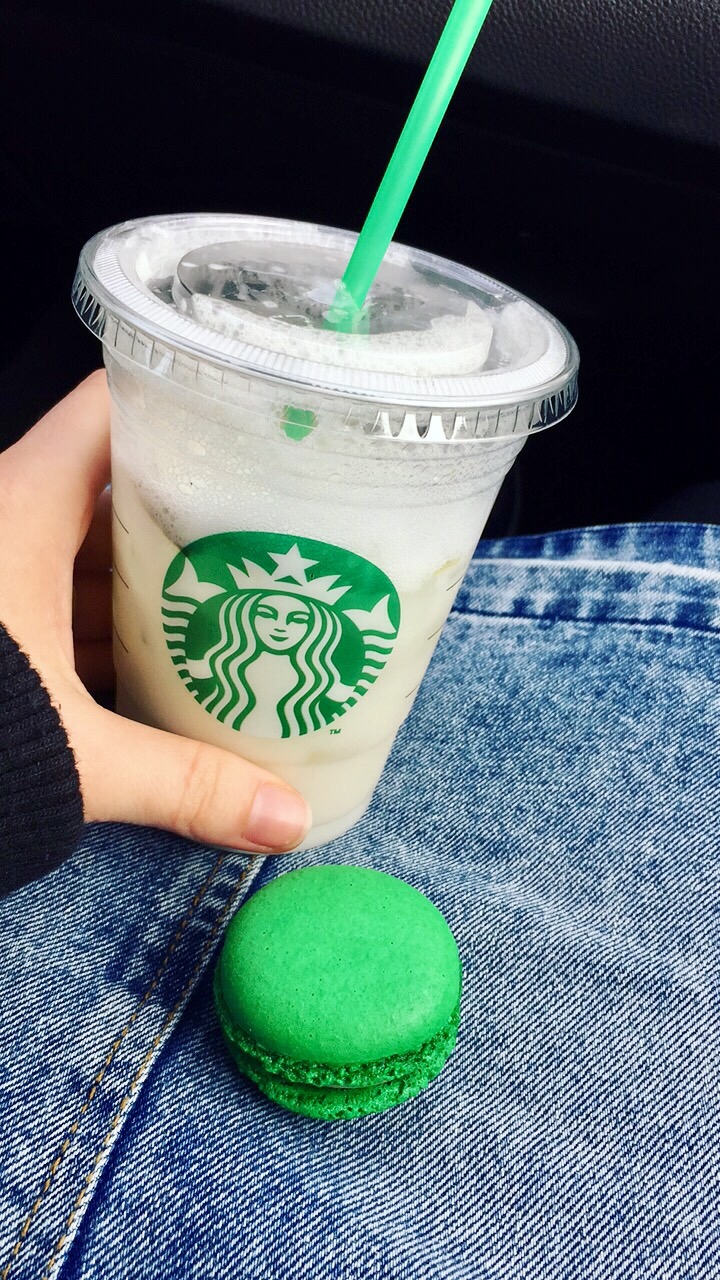 We had about an hour back at the house, to freshen up and change into comfier clothes before heading over to Sarah’s for supper.

Schnitzel, potatoes, asparagus and salad awaited us and it was all delicious. 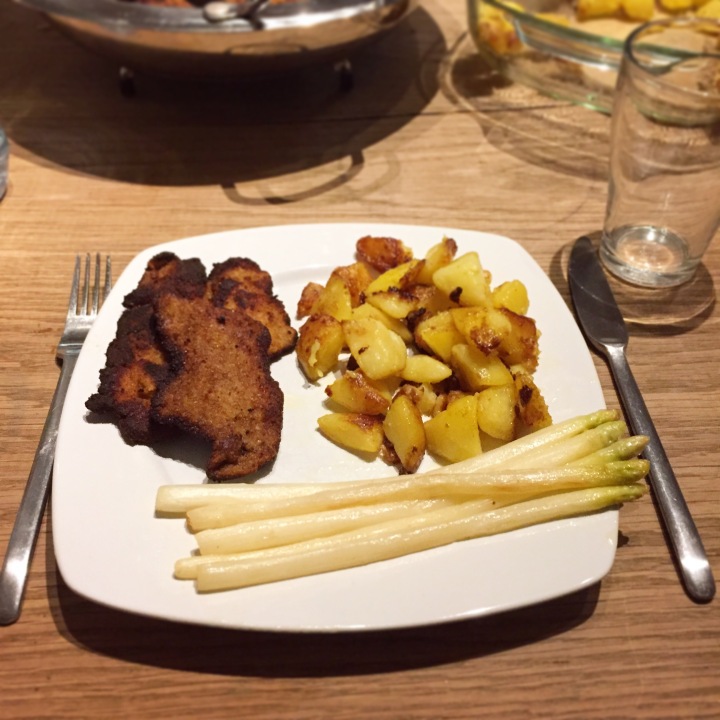 I stuffed myself and wobbled to the couch in wonderful discomfort. 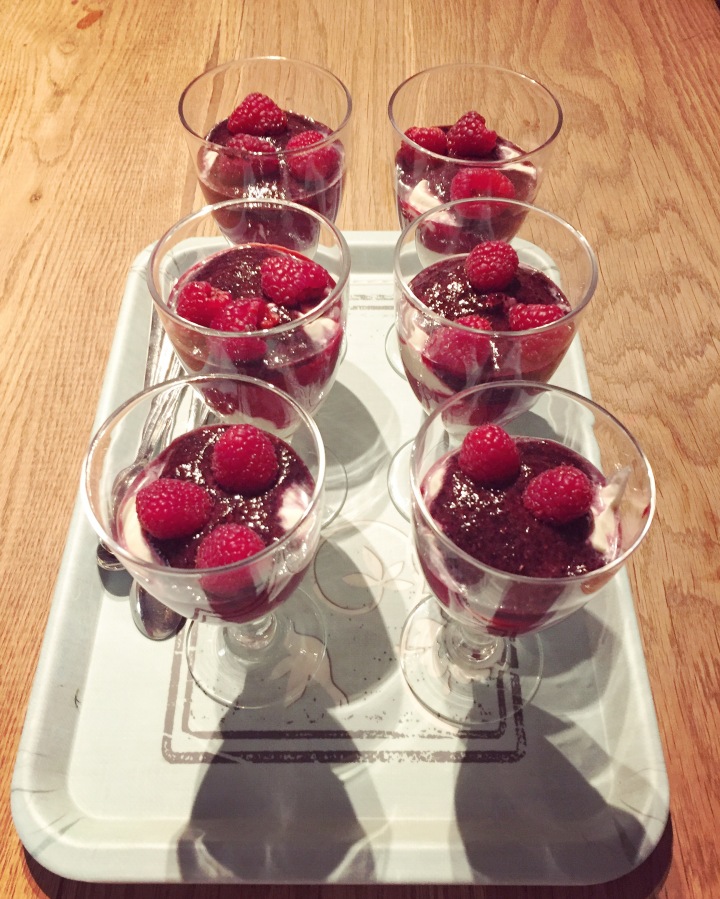 Dessert and coffee was then brought out and we spent our time eating more and visiting, making it a good ending to a good day 😊