It had been a very restless night for Mike and I.
Thinking of all that needing doing and what would be happening in a matter of hours.

I got up around 6:30 am, giving up on the idea of sleep and I got myself ready so that was done with.

We had the time to take the morning slow, since the official happenings wouldn’t began until around 3:00 pm. So we slowly sipped one last morning coffee before beginning to gather the last remnants of our Holland artefacts.

Once that began the time went fairly quickly, with some confusion 😜
The whole, ‘Mom packing for Sask. us packing for the move AND South Africa annnnd having to have things set aside for the night at the hotel’ was proving to make us really use our brains about what should go where 😬

We decided to book one more suitcase for Mom to take back with her, and by doing that, almost ALL of our things will be in Canada right away.
Apposed to it taking multiple visits between there and Europe to get all of our belongings with us👌🏻

Inge brought over a pot for us to heat up some soup for lunch, since all of our dishes were packed or given away 🙈
We paused to eat and drink another coffee before helping load up Inge’s car and sending her and Mom off to do some errands of their own.
With them gone, we loaded the last bags into our car and then did the final garbage take out/floor mop and waited for the realtor and buyers to come.

3:00 pm came and with it the buyers, taking a short tour of the apartment so they could confirm it was how we’d agreed upon, hands were shaken and out we went, waving goodbye to someone else standing in ‘our’ doorway 😳 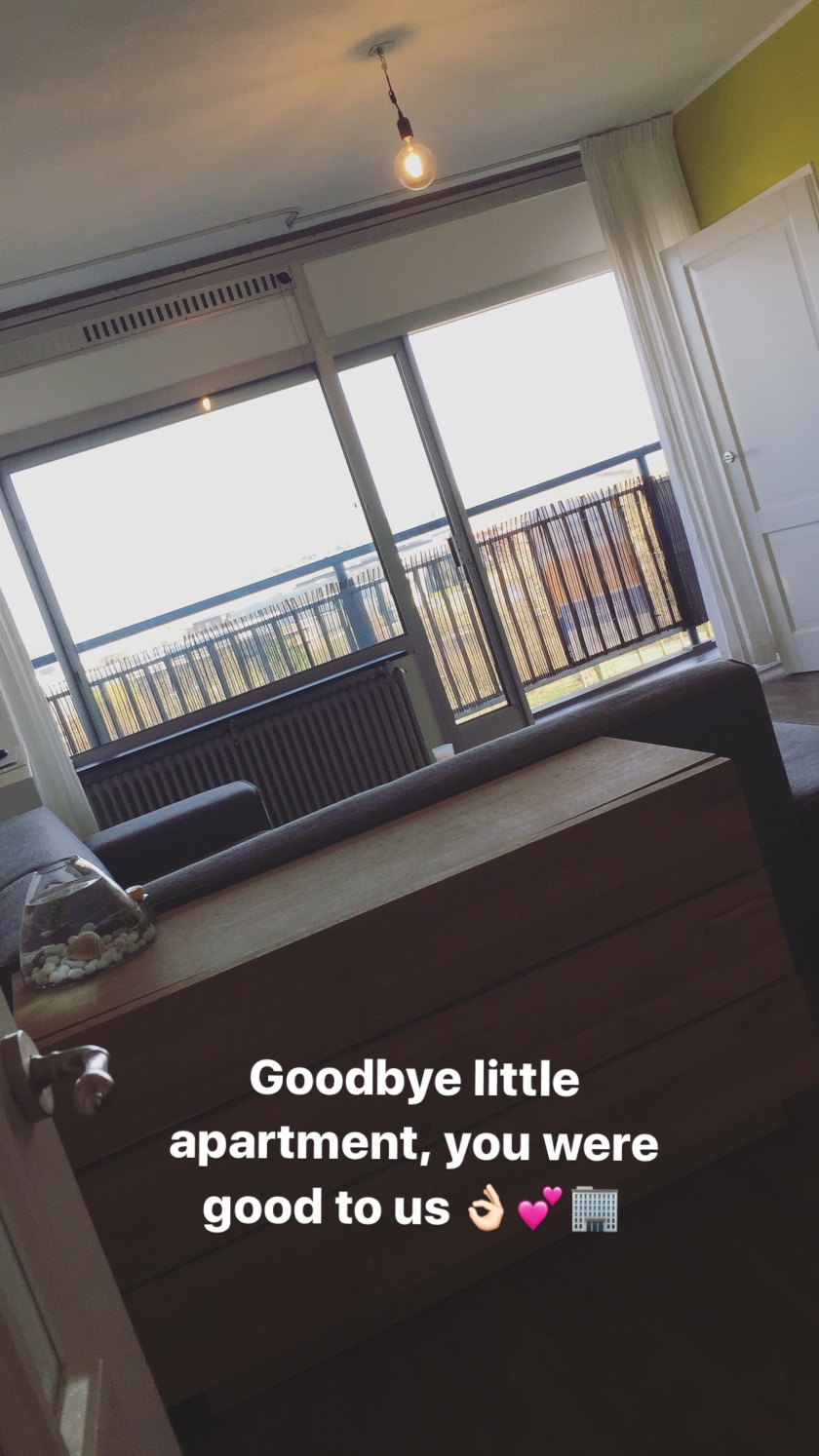 It didn’t really feel like an actual ‘moving out’ to me, I think it had to do with the fact that the furniture was staying so it didn’t LOOK emptied out and because we’d had to be packing anyways, it just felt like an extra large packing job.

We went over to John and Inge’s and sat in the garden for a few minutes, enjoying the loveliest day we had had thus far.
Warm and bright sunshine, hardly any wind, birds singing… and manure being spread, adding an unpleasant ‘air’ to the day 😜

Mike and I felt the effects of spring time in our nasal passages, by which I mean allergies. So we went out to get some meds to take with on the trip and to check out ‘Miss Etam’, a store  Inge had suggested for skirts. I found a denim one😬😷🌸👗

Ice creams were gotten as well, as celebration treats because all the packing and moving was over  for right then 👌🏻

(Meds AND vitamins were purchased, Mike decided a new and healthier us should be created I guess 😜)

Back to John and Inge’s we went, where Inge fed us my favourite meal made by her, a broccoli tart (a quiche ish thing).

We enjoyed the meal and our personalized coffee orders.
Since they bought a new coffee machine that does it all, we were all curious to taste the varieties it offered 😋

A hotel near the airport was chosen and after driving there with John, so he could in turn drive the car back, some preparations for the next morning were made and then we all went to bed, tired out from our day.

Mike woke up from hearing my alarm before I did, and that’s not usually something that happens, so I was glad for the solid sleep I’d managed to get.

Mike and I got ourselves ready to go and Mom got out of bed to say her goodbyes.
It was definitely a strange feeling, unlike any other of our usual parent goodbyes.
This one said with smiles and hugs, knowing it was sad to say bye and travel different ways but also knowing we’d be together again, in a few weeks 💁🏻 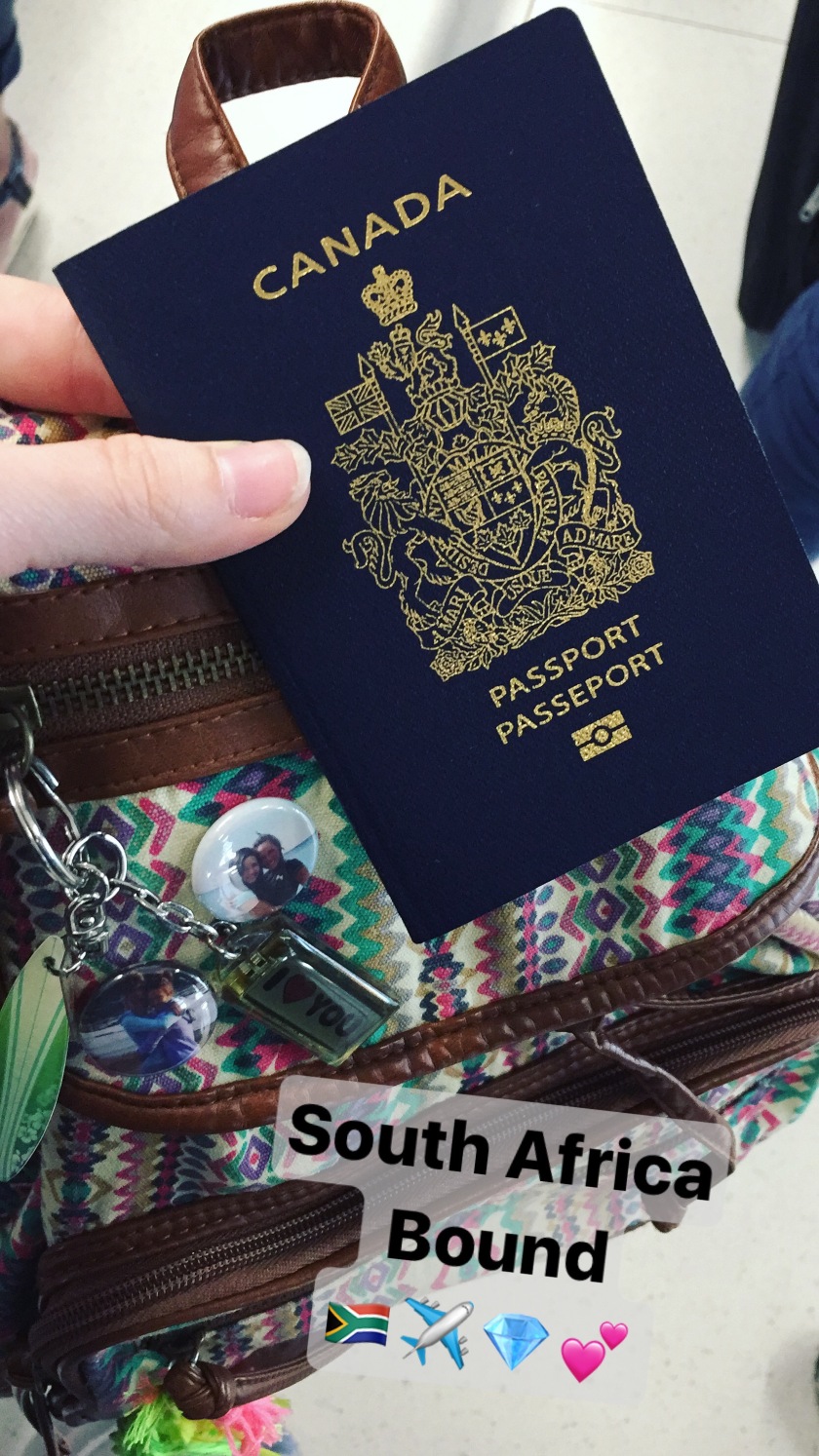 Mike and I walked a little ways to where the airport shuttle picked us up and due to a busy airport and security lines, we had no extra time to wander or find a meal better than McDonald’s pre flight.

We took off and found our seats to be fairly comfortable after how much we have flown with Ryanair, the budget airline with cheap flights and wooden seats 😜

(Meanwhile, as we flew, Mom had taken a taxi to the airport and began her journey back to Sask.)

Our flight felt surprisingly nice.
The meals weren’t too weird, not too bad of a movie selection and I had a pass time…deleting pictures off of my phone 😬
3,600 ish to be exact.
Leaving only 8,200 left to go through! 😩

10 or so hours later, we landed in South Africa, where Mikes friend Craig was waiting to pick us up and take us back to his house.

We felt probably the best we have felt after flying yet, since there was no time change or layovers.
Only a season change since it’s actually the beginning of their Autumn now 😏

I got to meet Craig’s wife once we got to their house (Mike already knew her as she is actually from Holland) and after a fresh drink and some chit chat, we hit the hay around 1:00 am.