(Knysna – pronounced with a silent K)

Morning began with breakfast at our hotel.
A large spread was waiting for us in the breakfast room and our hostess brought over our coffee.

We checked out by 11:00 am and began driving to our next spot, still in Knysna, just a little further out of town.

I wasn’t feeling so good, my allergy/cold becoming suddenly worse, rather than better, so we went to see if we could check in to our next hotel early.
We drove up to the large, deserted looking building and Mike knocked on the door.
No one came out and since official check in wasn’t until 2:00 pm. we decided to return then.

‘The Heads’ weren’t too far away, the area where the sea water comes from into Knysna’s lagoons.
We walked around, collecting some new types of shells while being sprinkled with a light misting of rain.

Something everywhere needed badly at the moment.When we were in Cape Town, they only had around a months worth of water left and in Knysna it wasn’t so bad as that, but everyone was still wanting rain.
Which came later that night 😊🌧

Once enough shells were picked, we went up to the ‘East Heads Cafe’ for a snack.
A Spiced chai latte and banana smoothie for the drinks and parmesan, parsley and truffle oil fries the snack. 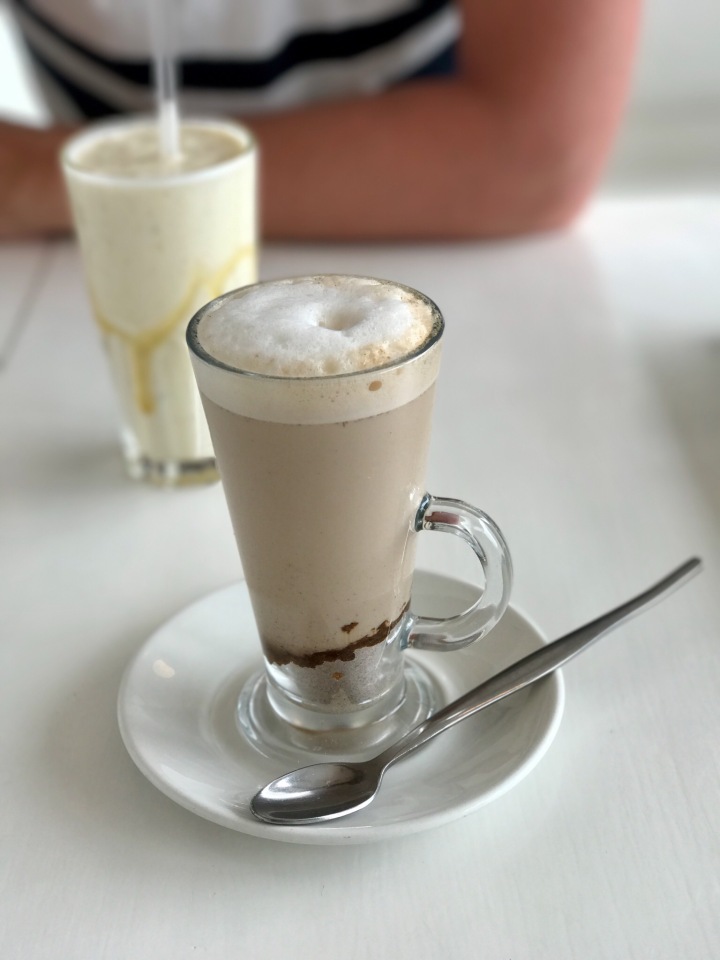 They were really tasty!
I’ve never used truffle oil in cooking but after a few dishes with it here, my taste buds are curious about experimenting with it.

It was 2:00 pm by then, so ’47th On Howard’ was returned to so we could attempt checking in again.
He knocked and waited fairly long once again and he was just turning around to come back to the car when the owner opened the door.

She was … interesting.
Blocking the doorway while she asked Mike why he was there?
Why do most people come to a hotel they’ve pre booked?😜

Then explaining they kept the doors locked for safety if no one was near the entrance.
Which makes sense, but what doesn’t is not having a buzzer or bell if somebody came while they weren’t up front.
She was nice enough but just a few actions seemed off, especially when she sturdily grabbed my hip while telling me to enjoy the room.
Don’t touch me please you stranger.
Especially not on my hip?
I have a perfectly good shoulder if you have to do that😂

The room was nice though 😁

I was pretty tired out so we settled in there for the rest of that day.

I had lots of blogging and writing to catch up on between sneezing fits and Mike was kind and accepted that I wasn’t up to doing more that day.
He actually went out to a grocery store quickly for some supper supplies.

Us feeling a little restaurant-ed out.

He came back with an assortment 😉😋

I was still feeling pretty Meh, the cold/allergy combo taking a toll after over a week of having it.

We went to try out a breakfast place but they were full and we didn’t feel like waiting, so we drove over to another area of town.

‘The Daily’ was where we found ourselves looking for food after a suggestion from the owner of an antique store we stopped at.

A peanut butter and Oreo milkshake called my name and so did the schnitzel.
Mike went for what he can rarely resist if it’s on the breakfast menu, French toast with bananas and Nutella, though this one came with bacon too 😉

The milkshake and the meals were very tasty and we left happy customers.

Walking along the street we went.
Glancing in the mall and then at the little shops set up by locals, displaying their wooden carvings, knickknacks made out of beads or things they had found, scarves and the usual touristy items.
Those type of shops/stands can be found all around in towns or beside the roads.

Mike took me back to the hotel where I slept the rest of the afternoon.

I did feel bad using our last true vacation time like that, but I also felt bad in the physical sense if we walked around and did anything 🙄💕

He’d made a dinner reservation at ‘Rib and Rump’ so we dressed ourselves a tad warmer and took our seats in a semi sheltered, outdoor eating area. 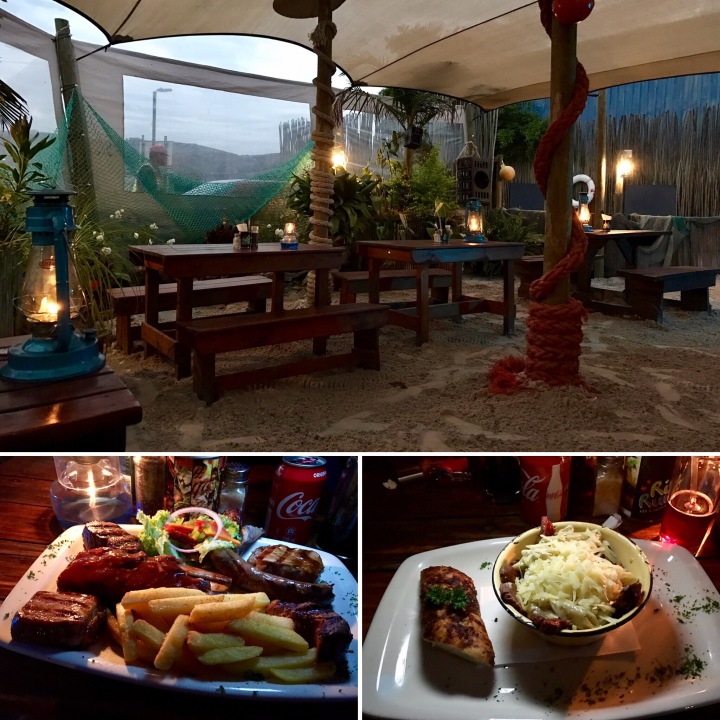 As we were given our drinks and blankets, we hoped the rude table next to us would hush a bit, not knowing how much we could take of their complaints and even saying the staff was no better than monkeys 😳
Thankfully they did tone down and we were able to eat our meals peacefully.
Mike got a meat platter and I tried the pasta with fillet.
Lets just say it was the perfect night for my taste buds to lose working capacity.
Though what I could taste of the noodles and fillet was good, the literal half a bowl of onions didn’t thrill me.
Had I been able to taste fully, there’s no way I could have eaten the meal 😬

Mikes platter was good and the staff were friendly, so it was a pleasant experience in our books🙂

As we left the parking lot, we gave some change to the man there.

You can find a person like him in almost every place you park here, telling you to wait or go ahead and where there’s a free spot, where to back out and drive ahead etc. in exchange for a tip when you leave. They are usually pretty thankful/polite but this time he was even saying ‘thank you madam, thank you master, thank you master, have a pleasant night!’.

We were glad that he was happy about the tip, but also sad that he felt like he had to praise us so highly, especially knowing that many of the people don’t really show any respect to them as it is.

2 thoughts on “Knysna – Heart Of The Garden Route”