We got ready and drowsily headed out to the tea and coffee area.

We were the first ones there and we clumsily poured some coffee and munched on a peanut butter cookie or two while waiting for the others to crawl out.

Our guide joined us to say good morning and that he was ready when we were, so we quickly finished up our drinks and loaded into the jeep.
He’d warned us to dress warmly because mornings were usually pretty brisk but it wasn’t too bad at all with the blankets around our shoulders and we forgot about the cold once a lion was glimpsed on the road and then another further on and once the sun was up 😏👌🏻

Photo creds to our guide👌🏻

The second (pictured above) was a bit of a younger male and he cared less about us being by him, calmly walking down the road.

He walked long enough that we decided to move on and try seeing other things.
Like a leopard that had been reported!

On our way to see the leopard, four hippos were seen bathing in a dam.

A baby tried to get up on its mother back and the group actually swam closer to us, grunting in slight annoyance.

We then drove as quickly as possible to reach the area the leopard was, all in anticipation of seeing one of the harder to spot, ‘big five’.
With roughly 1 to see in every 9,000 hectors, you may better understand our excitement 😉
We got to the red rocks where the leopard had been seen sunbathing and after squinting greatly and having some direction of where to look, it was seen.

Hardly 😜
It was way up high and laying down, not seen particularly well at all without the help of binoculars, but still seen 😉
It got up eventually, moving behind some rocks before popping out again momentarily and making everyone in all the surrounding vehicles happy for a second glimpse, as a leopard makes for a large gathering. 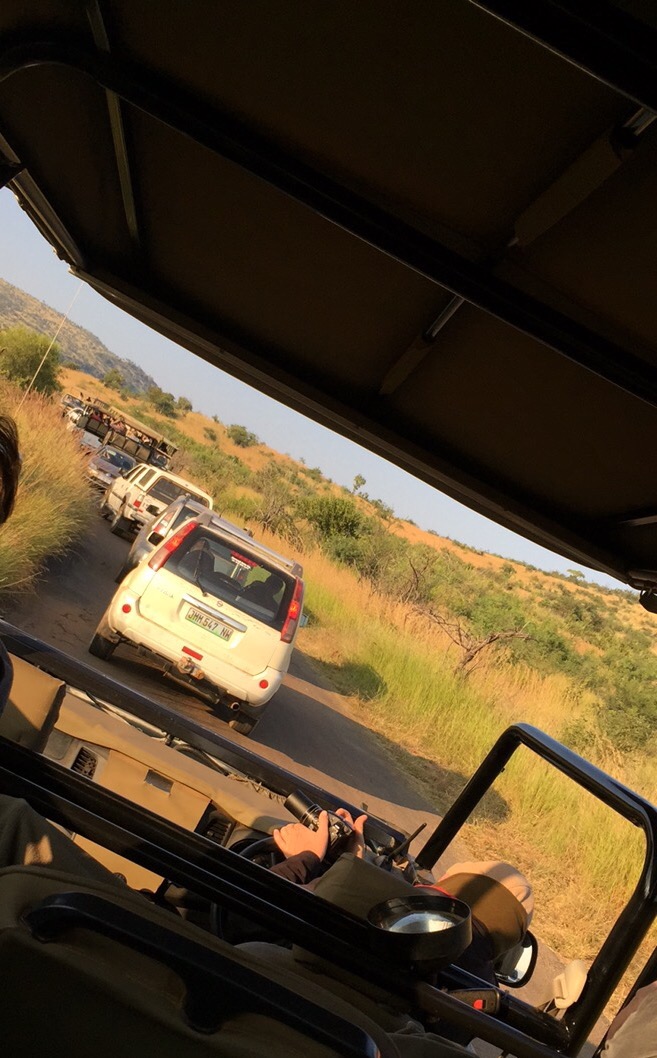 Photo creds to our guide.

It then disappeared for good so we also moved on, having more things to see before the morning drive was over😊

During our tea and coffee pit stop, a group of wildebeest was grazing nearby but all that I thought of whenever I seen them was the horrific death of Mufasa… I’m starting to think ‘The Lion King’ really effected the way I analyze adult life 😜

More animals were seen for sure, but from now on I’ll put some pictures and leave out all the ‘he spotted/she spotted , giraffe, zebra etc. etc.’ 😉 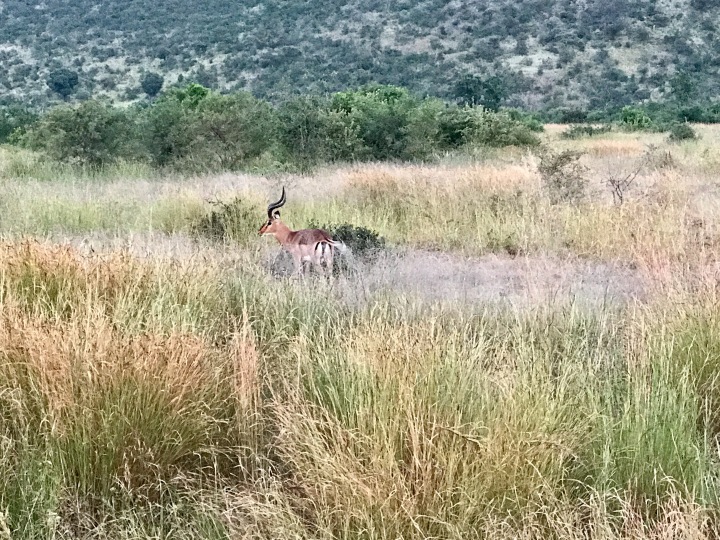 Once we returned from the drive, a tad dusty and disheveled but happy with all we’d seen, we sat down for breakfast.
It felt like it should have been 2:00 in the afternoon or something but it was hardly even 10:00 😳

I took a few of that mornings clothing layers off as it was already in the high 20’s and then I relocated to the lawn chairs overlooking the pool😏
Not long after, the trickle of water began sounding pretty inviting, so we went for a swim.
It was lovely, not to cold but not too warm, refreshing and perfect but I couldn’t swim too long, as I had a massage to get ready to go to after lunch 😉

Lunch was a caprese salad starter and I had a very nice lemon kingklip (much nicer then my first one back in Cape Town where I should have had steak 😏) main and Mike had beef of some kind… surprise, surprise 😋 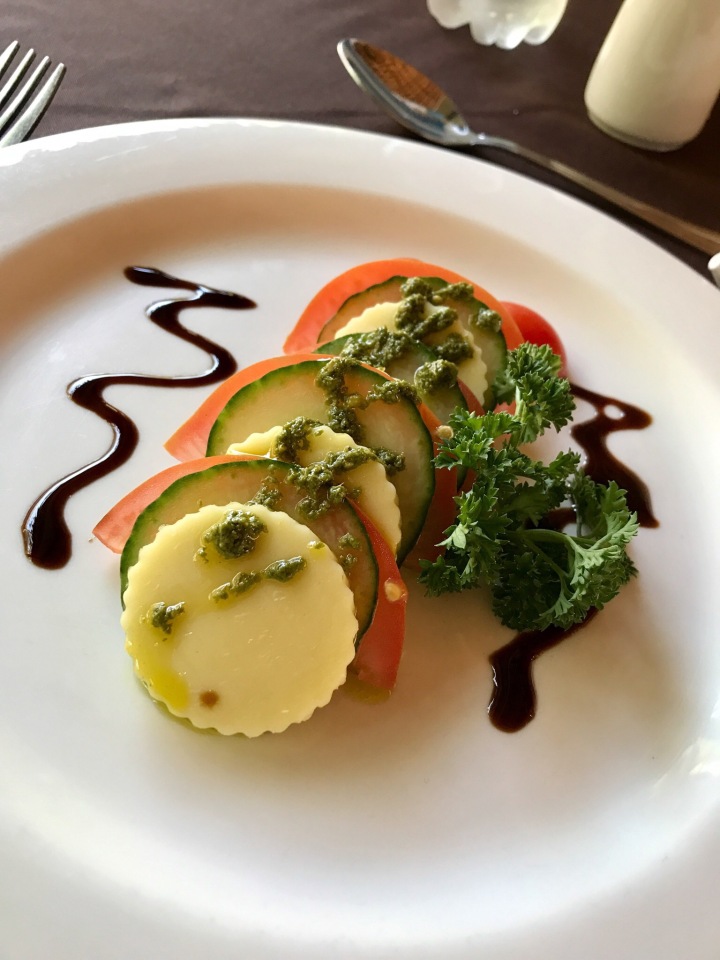 It had an open concept reception area and then raised board walks connecting the different areas.
I was taken to the ‘orange room’ where I got to relax and thoroughly enjoy an hour long back, neck and shoulder massage 😍

Once it was over, I sleepily found my way back to our cabin and immediately fell into bed 😋
Mike had spent the time sipping a specialty strawberry drink of some kind and then napping😏
I cat napped (laying with ones eyes closed… at least that’s what I remember saying as a kid when I didn’t want to go for a REAL nap??) until it was time to go to the meeting area for our evenings safari.

Talk about the never ending day!
I don’t enjoy morning at all, but getting up at 4:30 really gives a person lots of time to fill
😳😜

Mike had complained slightly that If we were paired with the German folks who had arrived, that they would probably just speak German the whole drive.
Because Mike didn’t speak ANY Dutch with the two guys that joined us…🙄😏

Not long into the drive a large grasshopper/locust whacked Mike in the head and he jumped in pain and surprise. 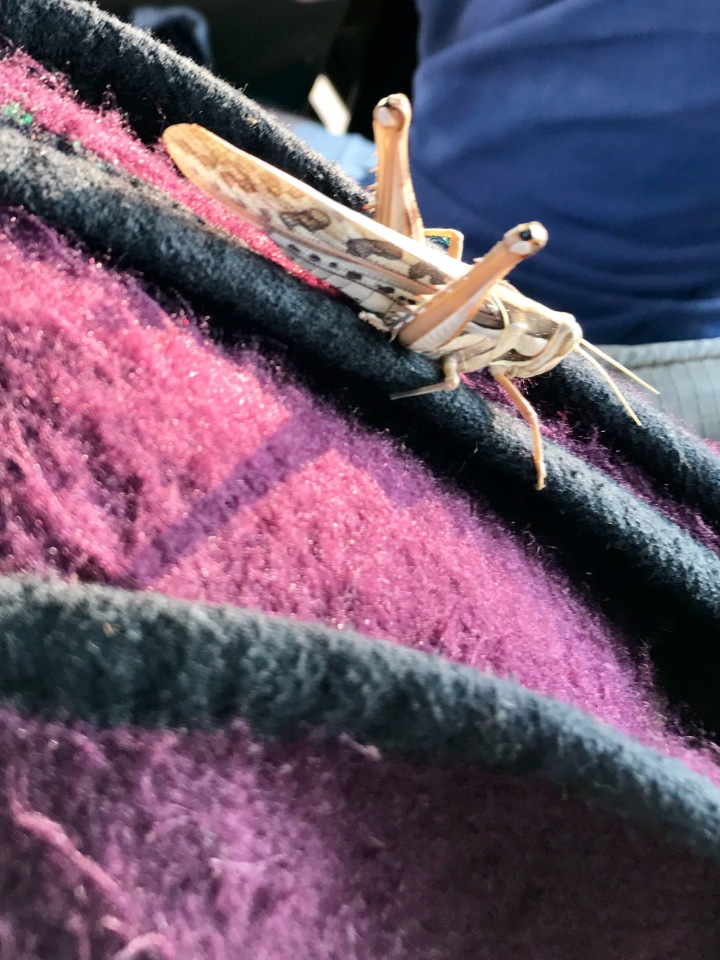 I was slightly glad 😜
He hadn’t believed that it hurt me the night before when two of them hit me during the drive… causing slight pain but mostly a spazz of instant terror that whatever it was that hit me in the dark, may be stuck in my hair/hood 😬😫😜

Some kudu were seen pretty quickly into the drive and Chris explained how you can tell the approximate age of the males by counting the curls of their horns. 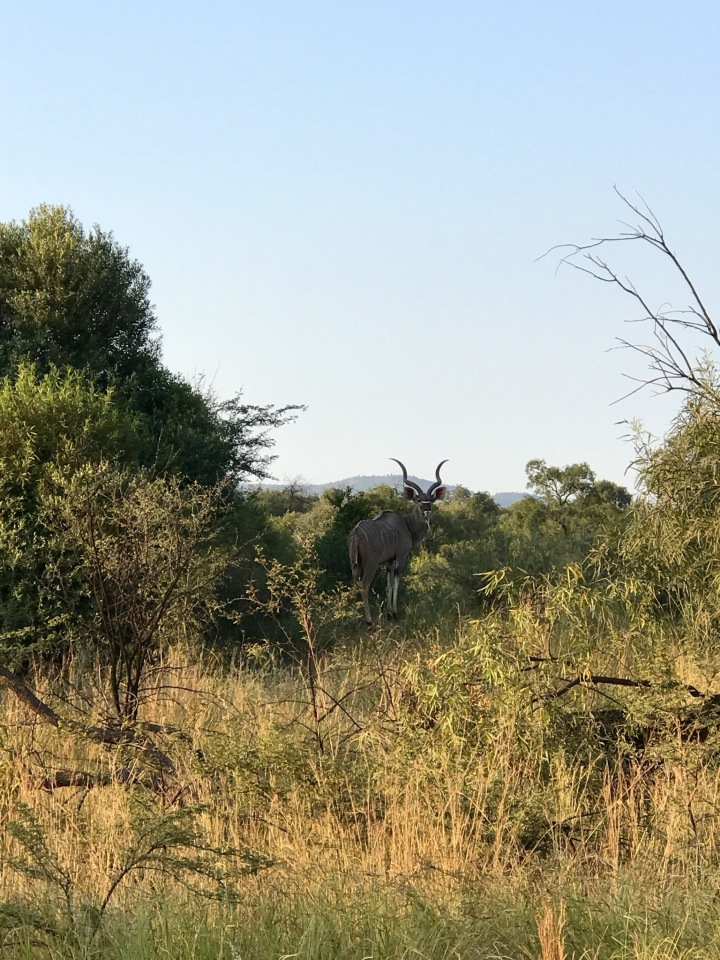 Each curl taking about 2 years to fully form.

It was radioed in that a cheetah with a baby zebra had been spotted, as well as two lions that took the zebra away from the cheetah!
So our route changed slightly and we tried to make it there in time to see some of the action. 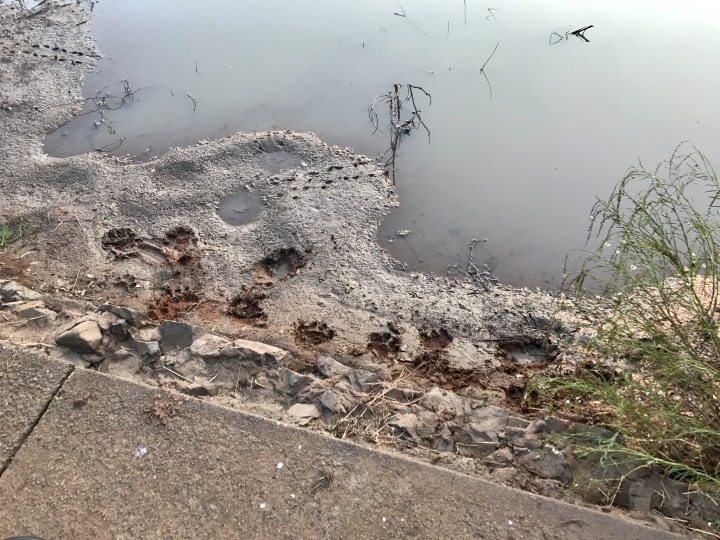 Unfortunately, that time we were too late but we did see tracks in the mud where the lions had drank after munching on their stolen zebra breakfast 😏

There are many species of birds but the only names I remember are the ‘go away’ bird, which I don’t even have a photo of and Guiana fowl, which are common and almost pheasant like in their characteristics but they are black and white spotted with blue heads. (Bottom right picture) 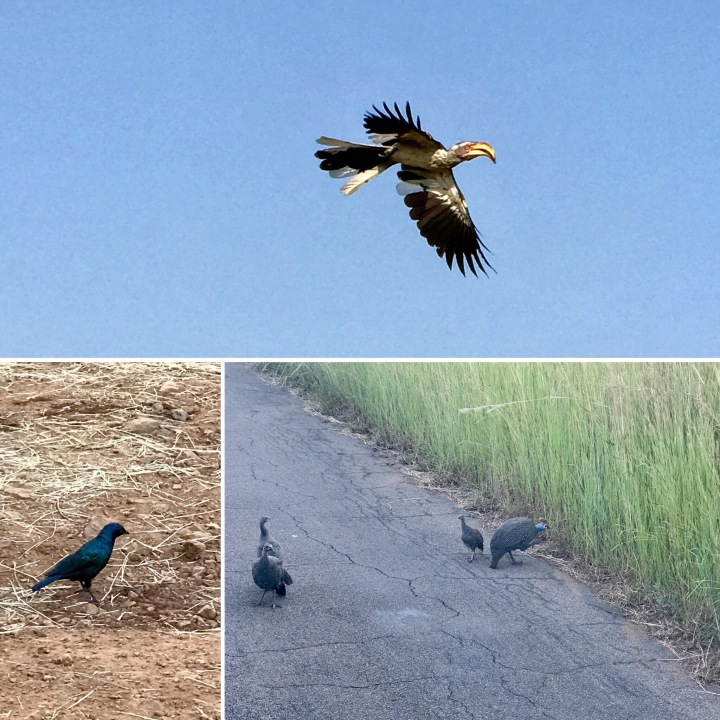 As we returned to the lodge, a journey of about 5 or so giraffes caused us to pause, as they grazed on tree and bush tops right along side the road.

Once again we had dinner with the group.

This time beginning with a very tasty avocado salad, a main course of pesto brie chicken and finishing with a chocolate pudding.

As with all the meals (minus Mikes first calamari 😉) it was very good and I must say I like the idea of having the whole meal plated and eaten in courses since it really makes you eat what you get.
Not just pick and choose what you think you’ll like most and also when eating it that way, we never felt overly stuffed, but a nice, comfortable full👌🏻

There was only wifi in the main area of the lodge so after dinner we sat by the fire pit momentarily to make use of it. I left not long after since I wanted sleep more than Instagram after being up since 4:30 and having to be up again at that time 😜
The lifestyle really must be a tiring one because I was already sleeping soundly when Mike came to the room about 5 minutes later 😋