(Sorry for the long post, trying to play catch up on all the days missed 😬)

Mike had to go into town right away to pick up our shipment of crates and the gate (brought all the way from Malta).
He had to leave for that by 9:30 am and I planned to go with him if I was awake but if not he’d just let me sleep.

Waking up, I cautiously reached for my phone to check the time and while reaching looked to see if Mike was still sleeping.
He was gone 😜

I hadn’t heard him leave, at all 😬

I made it upstairs and a cup of coffee was soon placed in my hands by Mom, who explained Mike had left not long before.

We sipped our coffee and chatted, having more brain power available than the night before 😉

Mom suggested a walk pretty quickly and I shouldn’t have been surprised 😏
It was +20 out though, so I was happy to accompany her and we went for a 5 km speed walk to the mail, having Mike pick us up on his way back from town.

The crates and gate had made it in one piece and everything seemed to be in good shape so we were happy for that and after unloading them in the garage, I decided to sit outside and enjoy the sun/maybe nap.

Not long into the sit, my cat Rolo joined me, soaking up any attention I was willing to give her, as I soaked up the sun.
Mom decided to join us and after too long in the uncomfortable lawn chairs she suggested we try laying on the trampoline.
A blanket was fetched and we laid out in the wonderfully hot weather for some of the afternoon.

Mike had found the cactuses and they were a tad disheveled looking so he took the time to take them outside, clean them off and replant them.

Later in the day Dad came home.
He’d been away for work but had come back for the weekend and it was lovely to see him 😊

We were invited to Becca and Nathins for dinner so we headed over there, happy to see them once again as well.
Our nephew met us with a shy grin and quickly retreated to the safety of his grandpa.
No worries, bribery would win him over soon enough 😜

We sat down for supper, excitedly awaiting what looked to be a delicious dinner.

It was all so tasty, I stuffed myself way too full, forgetting about the turtle cheesecake she’d also prepared for dessert 😳

It was a great welcome back meal 💕👌🏻🍴

Visiting and then giving golf cart rides to Spencer filled the rest of the evening and we happily, fully and tiredly returned home and to bed.

We’d went to bed pretty early the night before which resulted in an early morning, me tiptoeing upstairs to see if anyone else was up.

I didn’t have to wait very long for everyone else to arise and so the day began.

Mom and I drawing/writing together for a while.

Dad catching up on work papers.

Mike was on the search (via internet) for a vehicle for us.
Complaining that no one here knows how to write proper replies and everything looked a little weird 😏

Welcome to my last year and a half! 😜 Haha.
Slightly joking 😉

Later in the day he went to town to get a phone contract, have coffee with a friend and then play some soccer.

Meaning he missed out on the steak dinner he so longed for.
Even I thought the steak was good and that takes a fare bit, so when I sent him a picture of the freshly BBQd steak, seasoned and medium rare to perfection, he said his McDonald’s burger he’d just received looked pretty disappointing 😜

I could have worked on unpacking all of our clothes/sorting them into places for the time being but that seemed like to big of a task so I decided to push it to the next week.

Back to Sunday’s by Bob.

Not long after waking up and starting to do my hair, I heard the age old call from Dad as he delivered coffee to the room, ‘you want breakfast? How many eggs? When will you be ready for it?’ 🙂 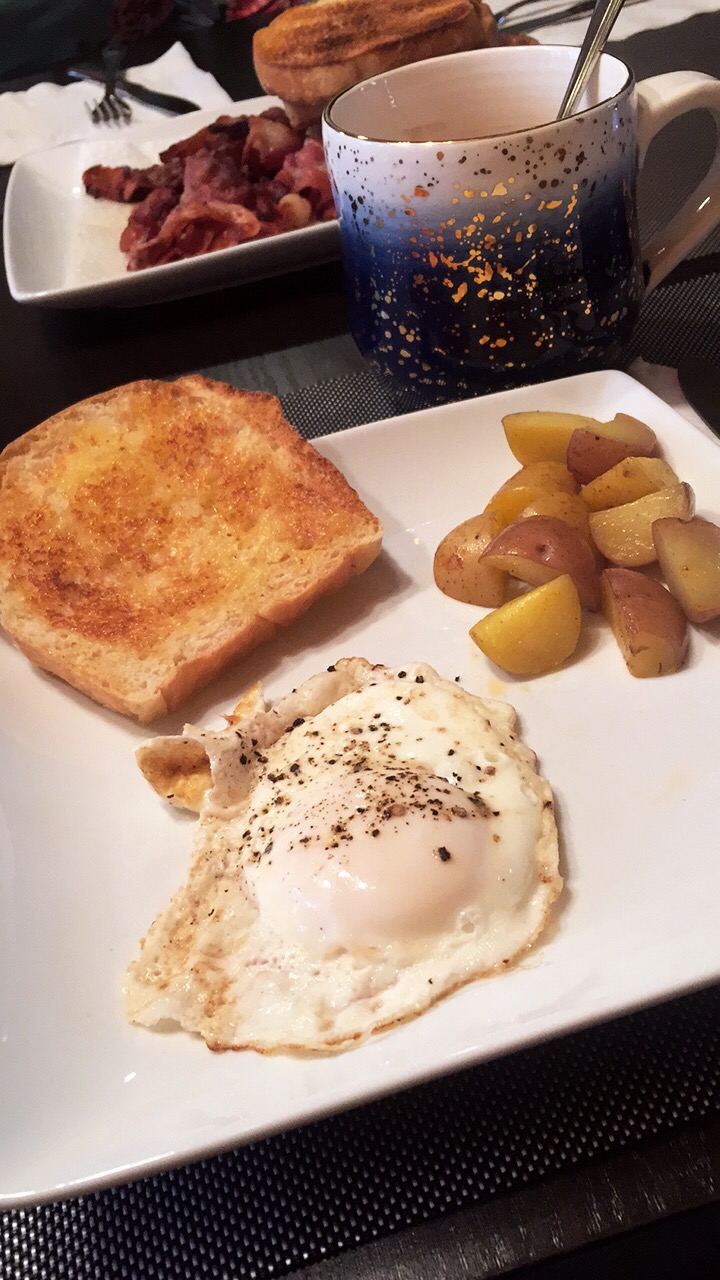 It was then off to church and being welcomed by many a familiar face.

Mike needed to get some ‘work boots’ 😳 So after church was over, we headed to town for lunch at Dr. Java’s and then the guys went for boots and Mom and I went for groceries.

It will be weird adjusting to grocery prices here.

An orchid costing 22$ when one of that size maaaaaybe would have been 10€ (equaling about 15$ Canadian).

While something like a pack of burger may seem pricey, if you sectioned it into the small packs we’d usually get, it averaged out to the same price.
Where as the one, normal, palm sized mozzarella cheese costing 7$, was not my normal.
We payed no more than 75 CENTS for the same size cheese ball in Europe 😱

Back at home, Mike proudly showed us his work boots 😉
Dad told him he looked great 😋👌🏻

I think with the thick rubber sole adding to his height, plus a hard hat sticking up from his head, he may blend in with the trees, tall wise 😬🌲🌳

Mike still wanted steak and Dad wouldn’t be cooking one where he was working come Monday, so the BBQ was lit and the table set.
While awaiting the steak, we heard a deep ‘pop’ sound.
We all looked at each other questioningly, jokingly saying maybe the steak was leaving, Mom saying it was probably just the deck creaking etc.

Nope… it was the steak 😳
Somehow the fat on it had caught on fire and the whole steak got a tad more… charred then usual.
The siding of the house behind the BBQ was blackened with smoke and we were thankful nothing worse had happened.

Mom and Dad questioned why it was that when we were around things caught on fire (remembering our Christmas visit and the cheese fondue incident😬)?

After supper, another oddity occurred.

Preparing Mike a breakfast and lunch for work.

He was to begin working with my brother in the bush the next morning and since his previous job supplied lunch, I’d never actually had to make him one.
Luckily for me, Mother is well versed in the art of lunch making and she guided his yogurt, strawberry and granola preparations and made him a wrap while she made Dad’s 😏
Breaking both Mike and I in easy to the whole lunch thing… since her wraps taste a whole lot better than mine 😝

No one had a Sunday nap so we all retired to bed fairly early, once again.

I did BEGIN unpacking the suitcases strewn across our bedroom floor… but then I got distracted and ended up being upstairs most of the afternoon.
Working on lettering, blog, eating one of Moms delicious wraps, supper preps etc. before Mom and I went over to Becca’s to go for a walk together. 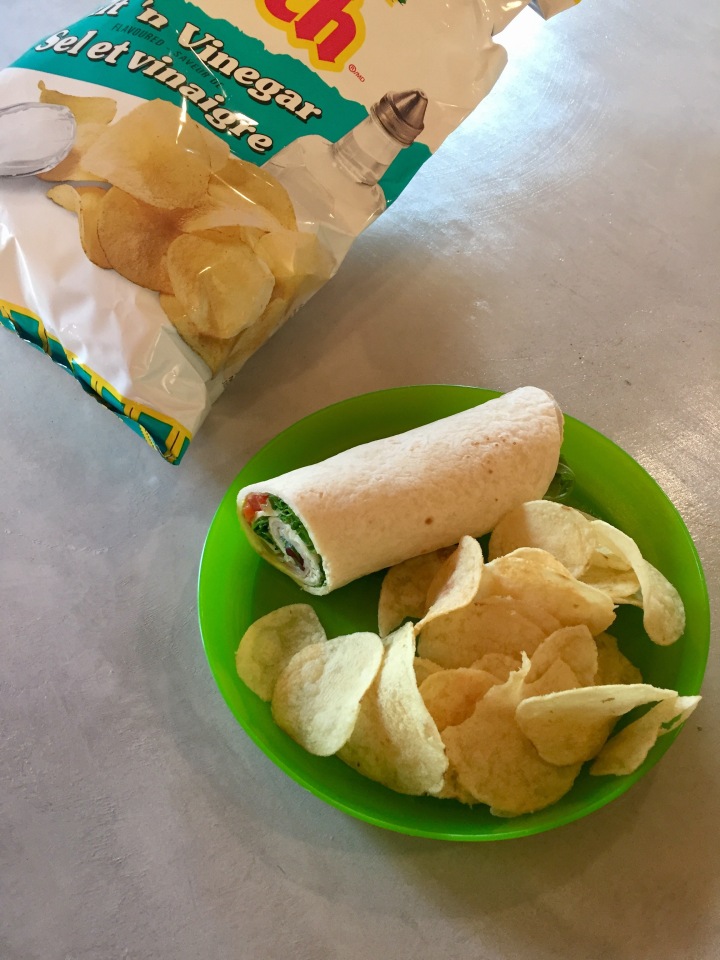 7 km and one hour later we were back at her house, just in time as Emily’s school bus dropped her off and she happily greeted us.
Telling me she thought Mike and I would be living in HER basement, not grams and gramps😋

Once we returned from our walk I began making supper, attempting to replicate a meal I’d eaten in South Africa. 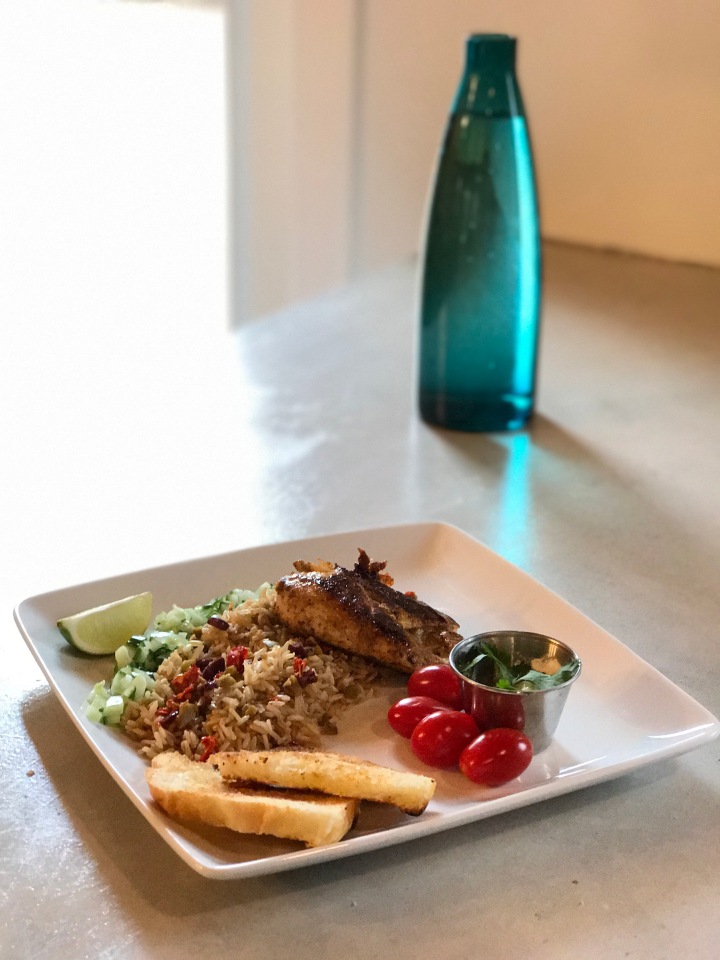 Minus a few issues, like the rice not being fully cooked because it was brown rice and the rice cooker doesn’t heat long enough to cook it, thus meaning the chicken was finished awhile before it and then a toast getting burnt, it turned out pleasantly 😁😜

Once I tweak a thing or two, I’ll share the recipe😉🍴

(Forewarning, it does have quite a few flavours and leans a little toward the different side of the scale, just being something we aren’t totally used to having, but who knows, maybe you’s are😋)

Mike had arranged to look at a vehicle after supper, so he left soon after to go see if it would be an option.
I stayed back, knowing if he liked it and I didn’t it would be hard to convince him of anything else anyways 😉

After some discussion about its perks and downfalls, a plan was then made on what day we would pick it up and Mike could relax about finding a vehicle.

He wasn’t stressed about finding one per say, but his excitement doesn’t come off as excited but rather hurried and in a panic to get something and that in turn makes me stressed even though he isn’t and bla bla bla… lets just say I’m just glad he found one 😏

Both Mike and Mom worked and so I was left to entertain myself.
Which was good, because I still had all those suitcases to get unpacked 😬

It took up a large chunk of my day but eventually I finished pretty much all of it, having to re-sort winter/summer clothes and re-pack some away.

Tortilla pizzas were on the menu for supper so a little bit of preparation went into those and then there was a nap and shower mixed in somewhere and some blogging and, and, and😋

Pizzas were eaten, coffee sipped and then we went to the gym in our small little town because Mom was going to try teaching me how to play ‘pickle ball’.
The sport they play there twice a week.

Also, I had a little bit of tennis playing stuck in my head, so I wasn’t going for the ball but more so waiting for it to come to me…  let’s just say I probably won’t become a weekly member 😏😋

I left once the real games began with everyone else who comes to play.
Going home to clean up from supper and make Mikes breakfast and lunch for the next day, returning to pick Mom and Mike up around 9:00 pm.

Stink’n kids I tell ya… staying out late, horsing around and then needing a ride home! 🙄😜