Mike and I got up and ready for the days work ahead of us.

With him heading to the family mill, after dropping me off to clean a new furniture store in town before they open up shop.

I was asked to come help the lady I’d previously cleaned with and together, we wiped, scrubbed, vacuumed and tidied steadily, for 8.5 hours 😬

Time went by fairly quickly but come 3:00 ish, my energy reserves were beginning to fail me.
My feet and arms not used to continual usage, hours on end 😜

It was a good day of hard work but once Mike came to get me at 5:30 I was more than ready to kick my shoes off and tend to my wounds.
A sliced arm, stubbed pinky and cardboard cut knuckles making me hope even harder that I can continue to sell the cement items 😜

Mike had gotten me a Starbucks iced coffee but since he’d asked for less ice, they had just filled the whole thing with milk and it was pathetic tasting 🙄
So in accordance to Starbucks policy, I went in and got a new one made free, with an extra shot of espresso 😎☕️ 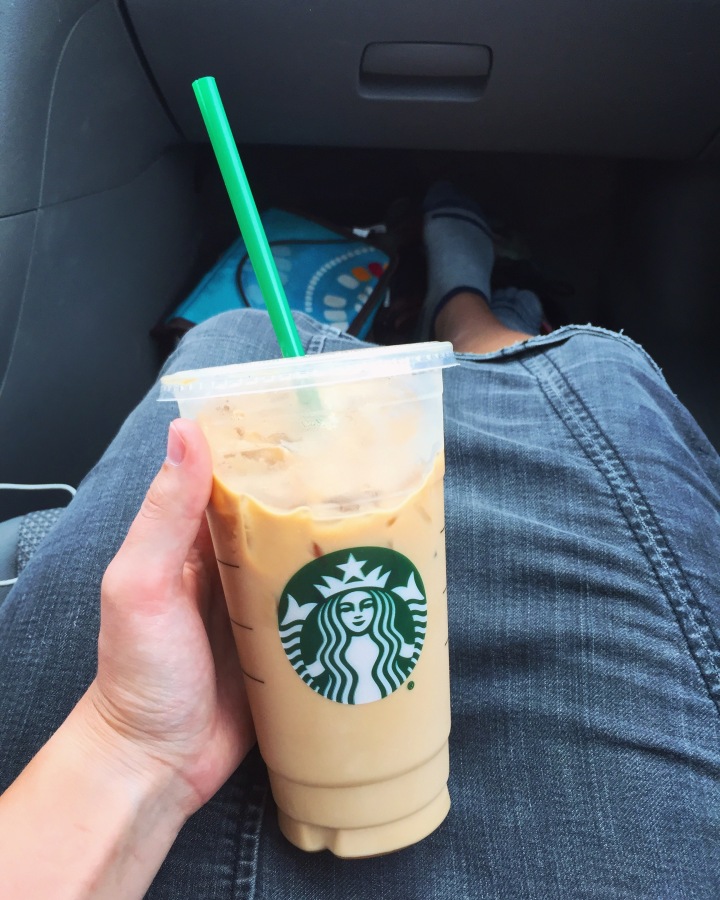 Someone had finally wanted to buy some leftover plates from our wedding, so we dropped those off, exchanged some lights at Rona and then headed over to the sister-in-laws place for dinner.
We were served crab rolls and cucumber salad🍴

Rhubarb coffee cake baked by the sis the day before, made for the perfect breakfast 😉👌🏻

Not long into the day we headed over to Becca’s (sister-in-law) with the kids so they could play together as much as possible pre trips end.

Our gramma came out for a visit, bringing pizza and the ever amazing cheese/garlic bread sticks for lunch 😍👌🏻

After chatting for a while, Gramma wanted to play some badminton so out we went.
Attempting to play through the gusting wind and blinding sun 😜🏸
Not getting real far but satisfying her sports desire I suppose 😋

We parted ways mid afternoon, leaving Al to play with her cousin while she was still around.

For once, the youngest niece (sick for a week) decided to nap without her mom beside her, so we took advantage of that by jogging around the yard for a while.

I don’t love physical activity, you all should know that by now 😜

But out of all sport like things, jogging is probably one of the lesser hated in my books and with the encouragement of my sister, we did 3km at as fast a pace as we could force out… after having stuffed ourselves on cheesy, doughy bread that is 🏃🏽‍♀️😏

That was exhausting and then not long after, we were able to fully replenish our strength with the Chester Fried Chicken and potato wedges that Mom had brought home for supper 😎🍗

I gorged myself on it and then later we were all paying the price, longing for more water then our mouths and stomachs could actually hold but needing to quench the terrible thirst the chicken had brought upon us 😜💧

Pro and Mom went to town with the youngest to take her in to emergency and try to figure out what she needed to make her a slightly happier child.
After stupidly being directed to one place and then another, they finally found out she had tonsillitis.
I kid you not, within 20 minutes of her taking meds… she was a new (ish) child 🙌🏻💊
Smiling at us, not crying with every form of interaction, playing on her own…
We were all relieved 😉

While they had been in town, Dad, Mike, Al (oldest girl of my sisters) and I went to our house in town to try to get some yard work done quickly.

The grass desperately needed cutting and raking and the trees which had survived transplanting, needed water after the scorching days we’d been having, if I had any hopes of the few left, living 😬🌿

(Titles are hard, as I mention often 😜 So tonight as I was close to publishing this post, I turned to my 5 year old niece for her thoughts on what the title should be, thus ‘And It A Nice Day’  😉 )

One thought on “‘And It A Nice Day’ Title Chosen By Niece ;)”