I awoke and carried out my usual morning routine.
Going upstairs to sit and drink some coffee while fully waking up.
I woke up too late for the first pot of coffee so after sitting coffee-less for a few minutes and deciding that just wouldn’t do, I stood up, stretched and… could suddenly no longer move my neck without immense, pinching, burning pain shooting through to the base of my skull???

Coffee was forgotten… which in itself tells the severity of the matter.

I stiffly stood where I was and told Mother about the pain I was feeling while I attempted and brutally failed, to turn my neck past centre left.
I could only turn right and even the littlest bit of tightening my neck muscles caused almost tear inducing pain.
And I don’t cry easily.
I don’t mean that crassly or boastfully, it’s just how I roll 😜

Good ol’google told me it was a pinched nerve and a ‘nurse to be’ friend gave me prescription advice of Advil etc. and a heated wheat bag 😋

Laying hurt, as I had to tense my neck to rise and fall, so I sat.
I’d had plans to accomplish things but the neck thing was prohibiting and I suddenly had much sympathy for those who suffer much worse injuries.

Mom made coffee and I sipped it cautiously, trying to relax all muscles and becoming aware of how tricky that was to do 😜

The sister and her ‘smart little dumb things’ (a wonderful term she came up with 😋) were flying back to their home that afternoon, so it was a morning of last minute packing and preparing.

She’d requested an air plant holder to take with, so I put the finishing touches on it moments before they and the parents left for the airport.

It was of course sad, but less so knowing they’d be back again later this summer 💕☀️

I stayed back, cleaning up the kid evidence that was scattered around, working on some art cards and cement orders before deciding the best thing to do for my neck would be to lay in bed and read, which turned into lay in bed and nap.
Surprise surprise 😏

Supper for Mike and I was a copycat meal of the warm chicken, basil and tomato cheese sauce wraps my sister had made a few days before. 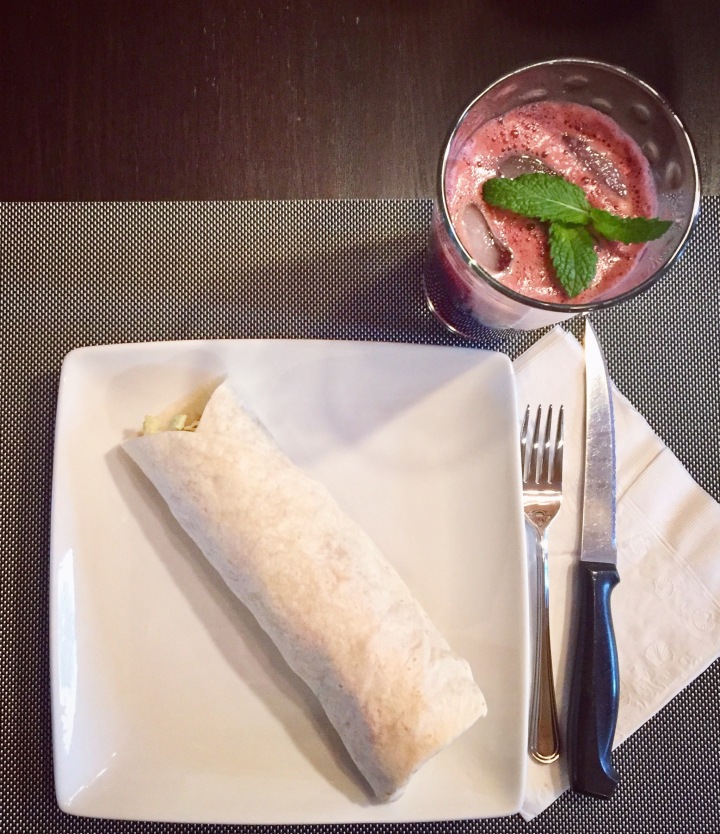 Juice was made up mainly of blueberries!
Which was very tasty 👌🏻💙

Read National Iced Tea Day to see what I thought about it.

The house was much more silent minus the two little munchkins… not always a bad thing but it’s better if it just means they are sleeping soundly/playing with a cousin, rather than them and their owner being gone 😏

A dreary, rainy day meant all stayed home for no work and not really any play either 😋

The bent over position didn’t please my slightly improved neck, so meds and a wheat bag were gotten before the next project began.

The request was for blues and whites and I happily sat down to the task…feeling the real purpose of such gloomy days are to make one stay inside and do the enjoyable indoor tasks without longing to be out, savouring sunshine.

The day was meandered through with coffee, leftover birthday cake, snacks and whatnot.

I wrote and later a help yourself supper of toasted chicken sandwiches was spread out.

Those filled slightly but not overly, as popcorn was in store for that evenings movie.

Lion, the film based on the true story of an adopted boy who grows up and finds his old home and family, though interesting… could have been about an hour shorter if they would have skipped some of the ‘pointless wandering with music in the background’ scenes 😬
In our opinion 😉