So, it’s hard to keep track of the progress in the house area when so much is ripped up, put back, more ripped out and more put back and so on and so forth 😜 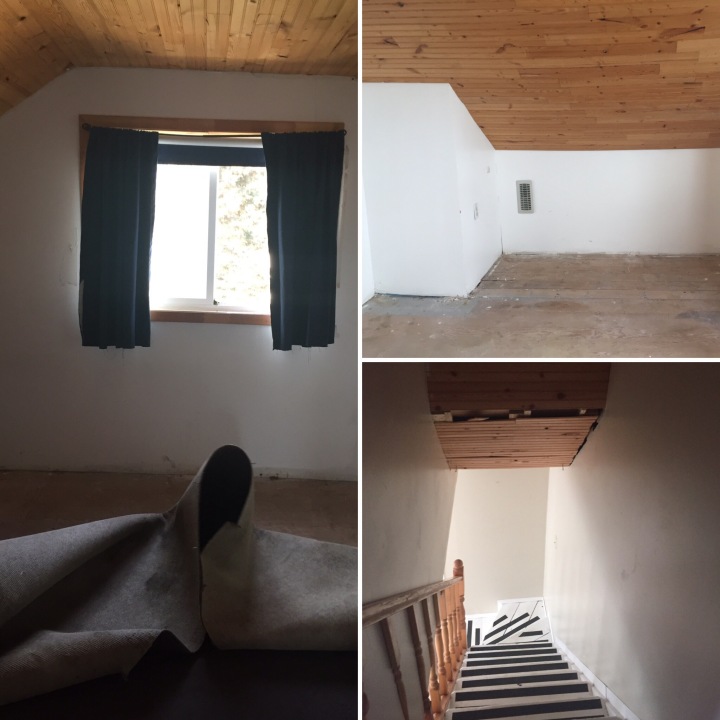 Well… ladies and gentlemen, the floors have been levelled! 😜

The kitchen, living room, bathroom and upstairs bedrooms have been levelled out and plywood sub floor put down, helping make everything more sturdy and in the process, tighten up some of the old boards which erased much of the squeaks and creaks! 😁

The bathroom is the most changed/closest to completion at this point.

The shower and toilet were moved and installed and Mike built a built in shelf beside the shower.

The second hand vanity we bought, has been repainted after a light sanding and primer and the vanity top was recovered with self levelling cement mix, for a faux stone look, that hurt the wallet waaaaay less than a custom 60′ inch countertop we could have found anywhere else 😉 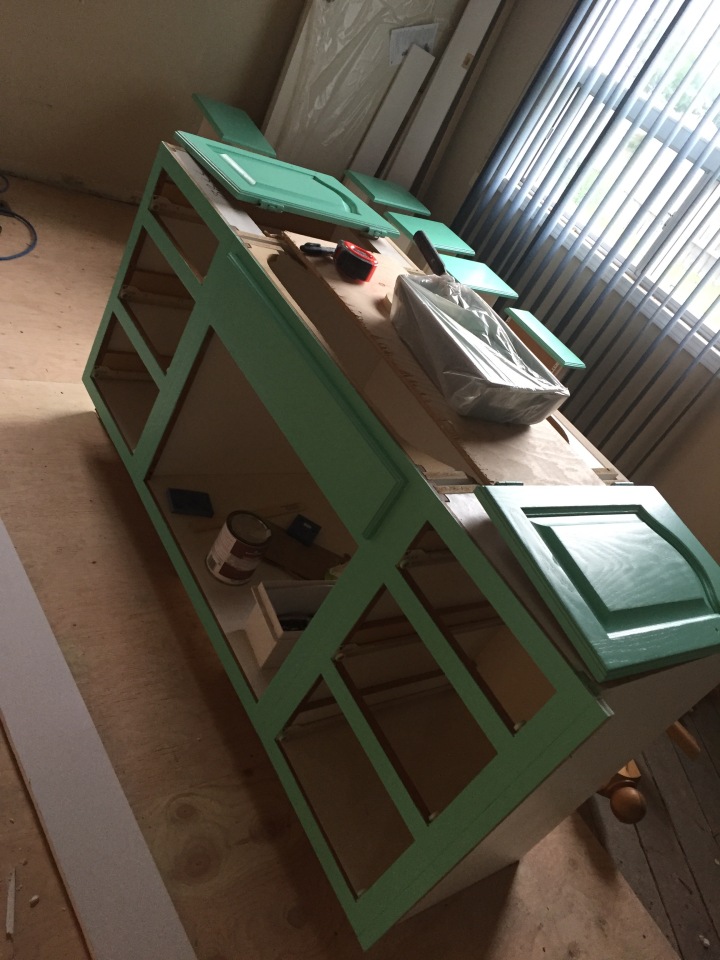 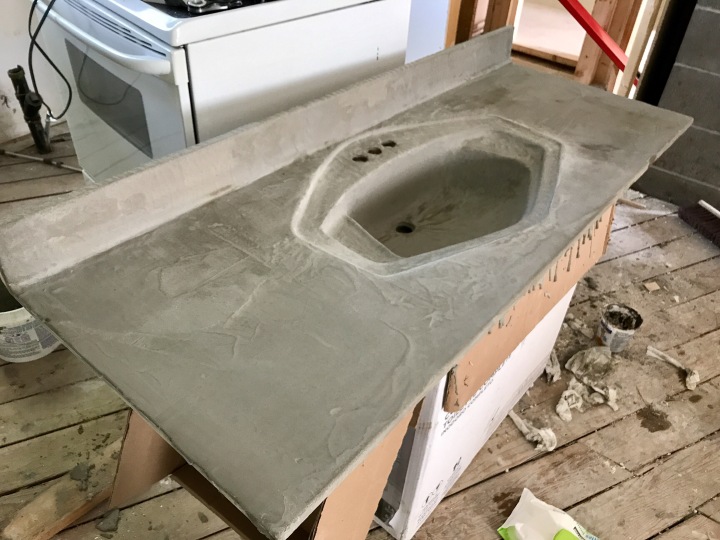 The few feet of space and window that were added to living room because of the slight bathroom shrinkage, made a big difference!!
That room now feels plenty large.

I ripped the drywall from the living room ceiling, being so covered in dust and who knows what else by the end, that Mom wanted me to ride home in the truck box 😂

The doorway between the living room and kitchen got a makeover as well, growing in height and width, again making everything feel bigger and flow better 👌🏻

The whole ceiling drywall ended up needing to be ripped out and that wasn’t the plan but it’s good it became the plan, as there were many, live wires in weird places, all reacting to the electricity tester from over a foot away, when the tool generally needs to TOUCH the wire to show if it’s live or not 😬

The ceilings in the living room and kitchen also needed some levelling out and the guys fixed that as well and now have the kitchen/living room ceiling and walls, re wired and drywalled AND mudded!

With the space gained from a few things being moved around, we decided to make a cutout for a built in fridge, thus giving me more counter space. 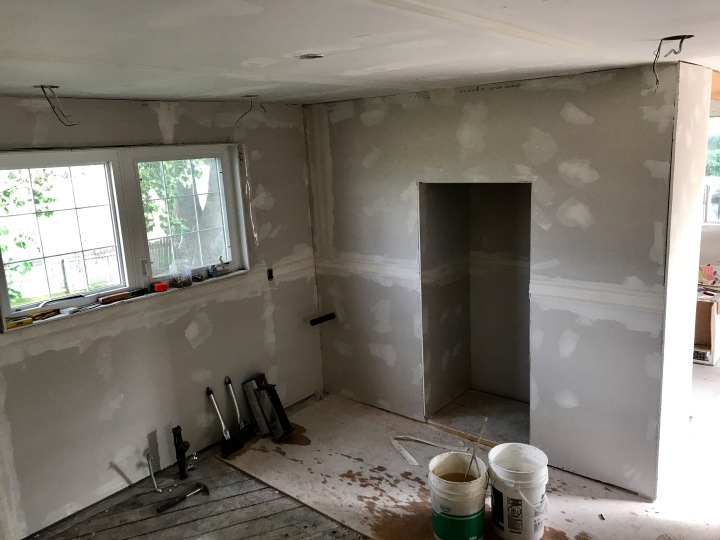 The bedroom upstairs has a newly hinged door and sub floor, as well as the cedar planking removed from the ceilings, as they weren’t staying nailed in to the drywall and looked much messier on, then off.
Plus Mike knows how to mud now, so he can fix the damage we thought we were avoiding having to hire someone for 😉👌🏻 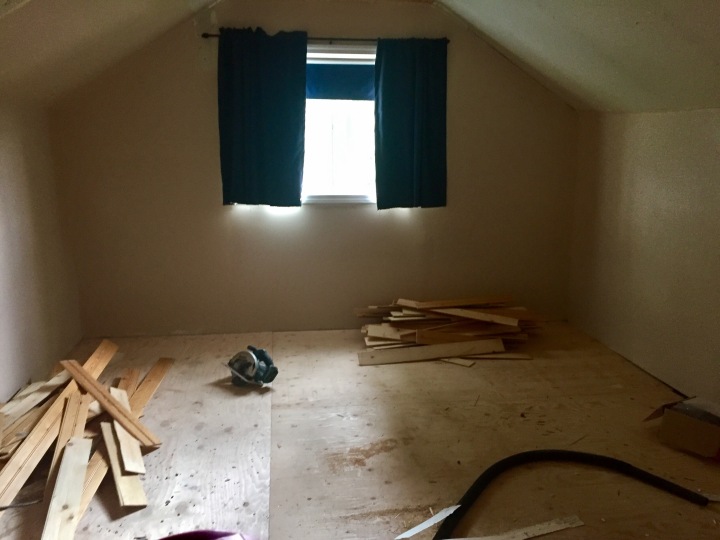 The wood around the one window was rotten so Mike and our neighbour took it out and rebuilt the frame.

A new back door was bought and installed and another of the same door is waiting to be put in the front, the little window adding some nice extra light.

The back porch was rotten and has since been ripped off  😏

Depending when we get in the house and are able to use a fire pit in the yard, I see a lot of scrap wood fires in our future 😜

I still have my two chandeliers from Holland but since the ceilings are lower in our place, I’m still contemplating where exactly I’ll be able to hang them.

Our flooring has been chosen and purchased👌🏻

A lovely, wooden and glass door with a crystal like knob, was purchased for the pantry at the habitat store 😄

Two dressers, one from a garage sale, one from the habitat store, both needing redoing but already perfect for places in my brains idea of the house layout 😋 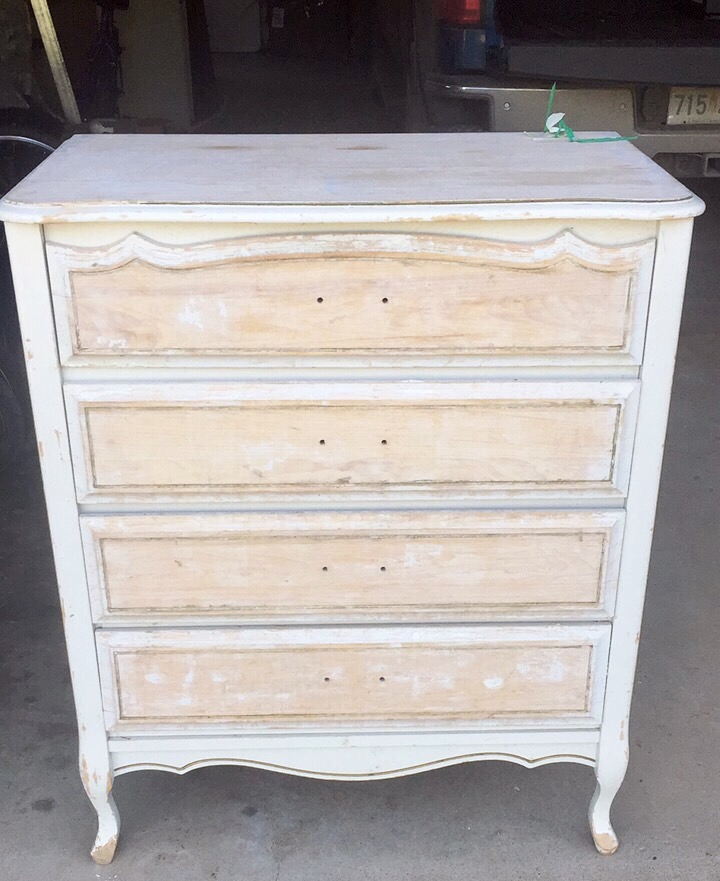 We plan on having an island in the kitchen for our table, as the layout is big for cupboards but not really table and chair friendly. 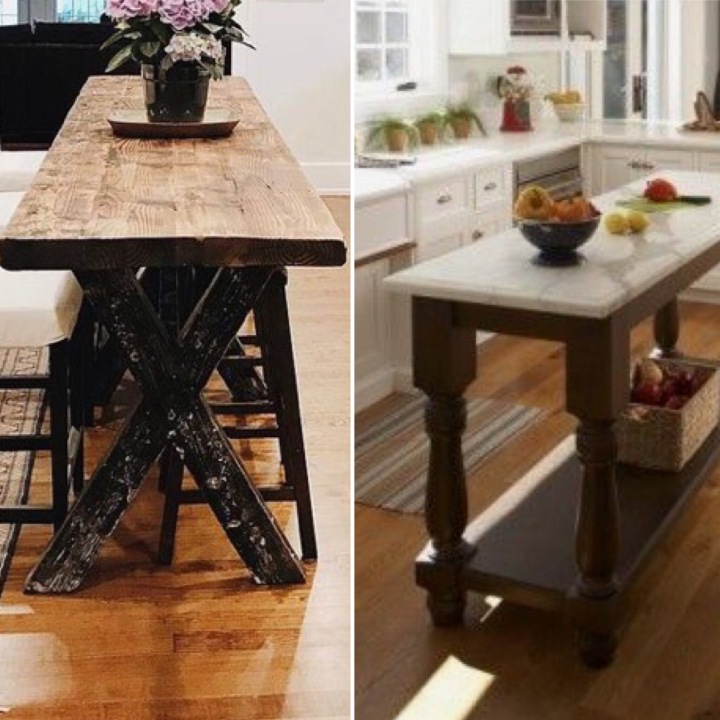 I want something that keeps the space feeling open and can fit four or more if that is needed and this is kind of the style I’m thinking we may attempt. 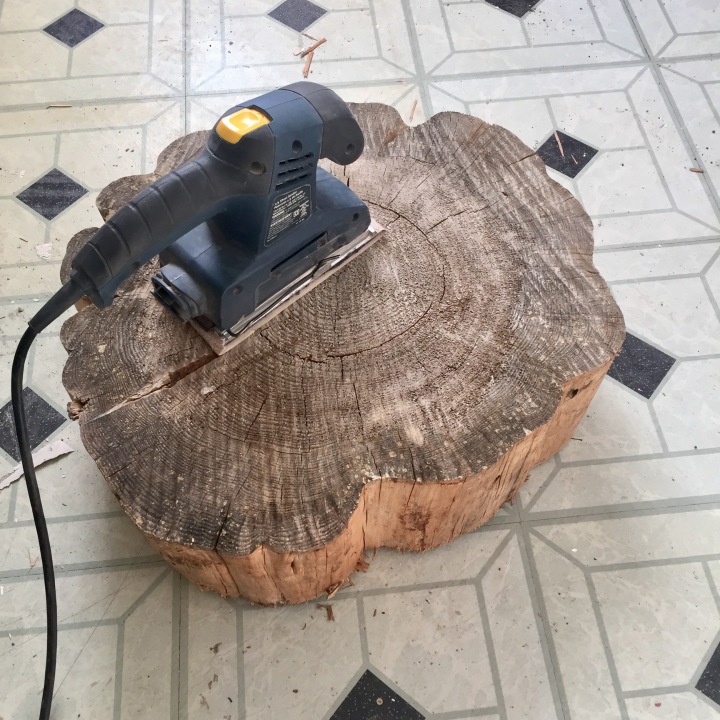 Mom redid her kitchen last fall and kept the cupboards they took out, thinking we would maybe be able to make use of them sometime.
She was correct and I will be repainting them white for our kitchen ☺️

This is a rough example of what I want to do with our entry way/built-in closet area.

Here is where I want opinions! Suggestions! Comments!

The trim… I have been drawn to light, charcoal toned, grey trim and doors with white walls for a bit of a change-up from the usual, neutral trim colors.

Though I do wonder how that would look when I do decide to add a colorful accent wall here and there?
What are everyone’s thoughts on this? 😎

Go to my older post Living Room Coming To Life,  to see the general colors and style I’m hoping to aim for.

A  few things have changed from the first thought out plans.

The bathroom backsplash tile though pretty, was returned since we were able to redo the vanity top and it already has a built on backsplash.

The barn wood I thought would frame some doorways was decided against for multiple reasons but it is likely the barn wood look will be added in a few other places.

I owe a big thanks to our neighbour, who has been teaching, lending and helping tremendously, all while keeping Mike informed on the town goings ons 😉😜

My bro for the wiring, plumbing, lighting, town errands and everything else he did that I’m not totally aware of 😬

Our friends from church who willingly lent some time to come help Mike with the areas he couldn’t manage alone.

Mom and Dad for housing us and lending us stuff we didn’t always ask if we could borrow 😜
For the meals prepared and vehicle usage etc.

John (Mikes dad) for financial and paperwork advice and suggestions 😎 📑📈📊💵

Mike, for trying his best to stay positive and patient even though he’s having to harness a lot of disgust at how wooden building are put together in an ever changing climate, compared to the cement and structurally sound buildings he was more accustomed to in Europe.
For all the work and hours he has put in, when I’ve pretty much just been the idea giver, garbage hauler and occasional food deliverer 😜

Couldn’t be doing this place without you all!
😄💕🏠