After arising and sipping my coffee with cream and sugar, two things I decided I had to continue to allow myself during this two-week eating plan or I would whither away 😜, I did my morning tasks, whatever they were, before heading over to the house to start working on kitchen cupboard fronts with Mike.

He had went there that morning and installed 🎶 da da da daaa🎶 a doorknob on the bathroom door!
Folks, we now have a working and useable commode 😄😜

Mike picked the door knobs and though I admit to being hesitant towards them, I really liked it once installed 😉👌🏻

I took the cupboard fronts outside and began sanding, after which I carried them to the garage, washed them off and then Mike and I taped and plastic wrapped them all, so that the wooden handles could be spray painted gold 😁

Then they were all hauled back inside and upstairs, to where they would rest until the fronts could be could be painted white.

I had made turkey burgers that afternoon and Mom fried them up for supper.
Eaten with tzatziki, guac, lime, pita bread and fried veggies, it made a tasty and colorful dish😁🍴🥑🥗

I… yes I, made breakfast, not just for me either😏

I just so happened to be ready, so I decided to try my hand at frying eggs and though my hand isn’t actually that good at egg frying as it turns out, breakfast was served 😜

(Even now more than ever fathers return from working away is wanted, so he can resume his Sunday breakfast post, among other things 😉)

Being a servant.
That was the general theme of that Sunday’s sermon.
How Christ greatly served others when He was here on earth and now with Him being in us, how than should we too, serve others?
With what attitude do we go about helping?
Do we try to make more of an effort to be of help?
And if so what is our motive behind doing it?
Is it to gain something for ourselves or to truly be of service?

I am not a good servant 😬

If we were talking literal servants, I’d probably be placed in a cell for insubordination 😬😜

Mom had made us a packed lunch, as we were trying our best to stay with the eating plan and end our first week well, but the little wee wrap, no matter how tasty, only fills up so much belly space 😞

That evening I had a bowl of yoghurt with fruit and Mike looked over at me and was like, ‘since when have YOU eaten yoghurt??’

‘Since I started starving’ was along the lines of the answer I gave him pretty sure.

In all honesty I just really, really want a stroopwafel. 😜

The three of us went for a hearty, 5.7 km walk later that night. 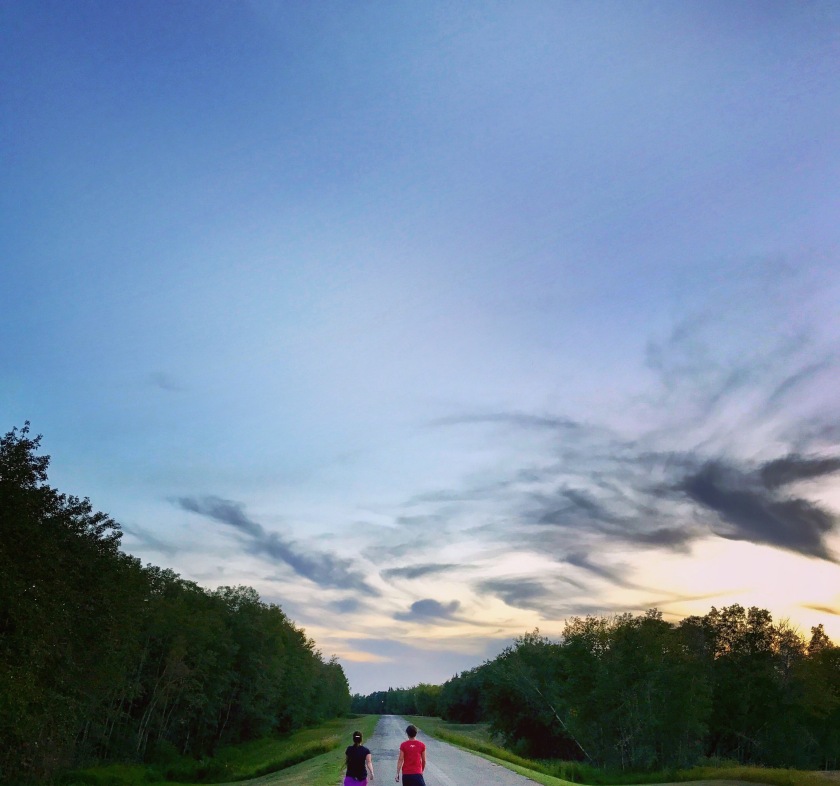 The cool of the eve and colors of the sky made it a pleasant one, though Mike wasn’t the most willing participant since it was a speed walk (a little weird for such a lanky guy, to not want to keep up with two little people, yes?).