We, the parents and one set of siblings headed to Sedona, where Devils Bridge was the main motivation for going there.

After some lengthy traffic delays, we finally arrived at the start of the trail and off we went. 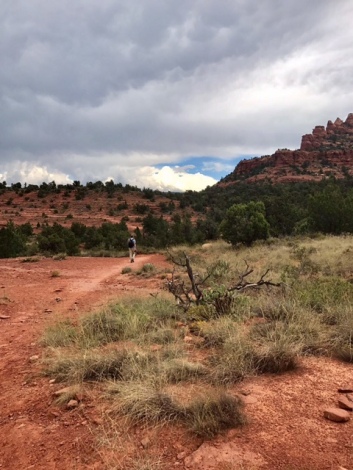 Mike said flip-flops would be fine for the hike and they were, minus the powdery red sand that then coated my feet 😩😖

We trekked in 3.5 kilometres, enjoying seeing green around us, opposed to the desert browns that had been filling our systems for the last week 😜

By the last bit of the hike, I was getting a little out of breath but I blame the minute amount of elevation, which for a prairie girl, is a lot 😉😋

When we finally got to the bridge itself, the winds picked up, rain began falling and dark clouds gathered overhead and all around.

As I have no clue when, or where, monsoons hit in Arizona, all the stories of their treachery were immediately reeling through my mind.

All rules of what to do if caught in a monsoon? Non existent 💁🏻😜

I pretend to like adventure in my head but really, if I ever had a real ‘adventure’, I’d probably just get the shakes, curl up and give up, until I was maybe found 😜

Back to the bridge itself.

I’m no fan of heights so I didn’t really desire to stand on it but I figured we were there and when would I do it again? So Mike and I headed out to get the photo proof 😏

It wasn’t so freaky to be ON it, as it was just to look at from across the way, so that went better than expected 😜

It was actually refreshing and the sun reappeared once we got into town.

We ate lunch in Sedona and got to try cactus fries with prickly pear, sweet and sour sauce, which was interesting. 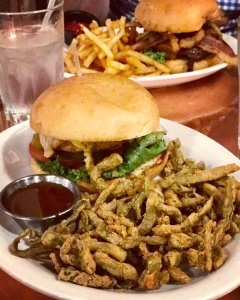 A little more wandering around town took place and then we stopped for coffees to get us through the drive to Flagstaff, so we could attend that evenings church service.

It was then a lengthy, slightly uncomfortable drive all the way back to Anthem but the father-in-law had it worst of all, as he was the driver 😏

A guest was in our room that morning, one I quickly beckoned Mike to relocate…

His parents came into the room and then asked ‘Where the beast had come from?!’ ;P

After that excitement, Michiel and his dad had a date to watch a soccer game that afternoon, so the three of us were Starbucks bound for the wifi 😋

While they watched some important game of some sort, (😜) I caught up on my blogging.

The time then came for us three to leave and journey back towards Prescott.

The guys had been invited to go out hunting with my brother-in-law who was around for the weekend and that meant I would get some sister time! 😆💕👌🏻

My older niece ran to hug me but quickly reached behind for ‘Uncle Mike!’ 😏

The littler one gave me a long hug, though the confusion was almost seen across her little face, like ‘You do not belong in this place??’ 😋

(I say littler but really she’s pretty much only younger 😜) 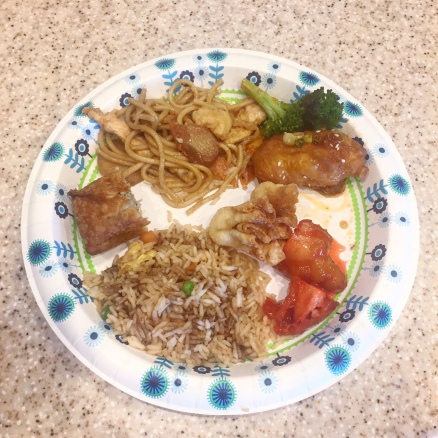 We were staying with my sisters, in-laws and us ‘girls’ stayed up talking until…11:30! 😱

(I say ‘girls’ because we don’t really consider ourselves adults but nor are we young enough to be with the children? :P)

Sadly enough, it felt like it was 3:00am and our aging process was clearly evident 😜