I worked that morning and Mike ran errands, got a haircut etc. between the drop off and pick up of myself.

It was a fresh, -1 outside, so when he was late to pick me up, I began walking and it was brisker out than I recalled -1 feeling 😜

Lucky for me, hubster had thought to turn on my heated seat AND buy me a Starbucks, hence the late retrieval 😉

Which I do not like, not even a smidgen and we had JUST discussed that fact, days before 😏

It was the thought that counts 💕

Though thoughts do not TASTE like caffeine running through ones system 😜

After getting back home… and caffeinating, to the other home we went.

Maybe we should name OUR house, to make this ‘our home, our other home, their house, or ours,’ less confusing.

Did I mention Mike decided on a two week deadline to move in/have the house ready to BE MOVED INTO?

A surprise was afoot!

The mother will be on a vacation during her actual birthday, so her dear friend arranged an early, surprise birthday lunch for her.

That meant I had to take my clothes and hair stuff to OUR house and get ready there, so that Mom wouldn’t be weirded out that I was being presentable for no reason 😜

Choosing a black skirt to put on in a house under construction?  Maybe one of my dumber moments 💁🏻

My sister picked me up and off we went, arriving early at ‘The Boreal Bistro’ to help with placing some things out and taking a picture of everyone, so a little book could be made for Mom with notes from everyone.

Once the birthday girl walked in, we all began singing happy birthday, and that was that.

No more lies and pressure of having to keep a secret😜

She said she ‘suspected’ but only because 50 is rather monumental, not because anyone slipped up 😉

(Yes, I can tell her age, because her friend already let that cat out of the bag over on Facebook 😏😜)

Some games were played, including one where we had to pick all of Moms favourites – food, music etc.

Happy to say that yes, I did win that one.

Out of 12 ladies, I was the only one to NOT order the salad, but the meatloaf 😏 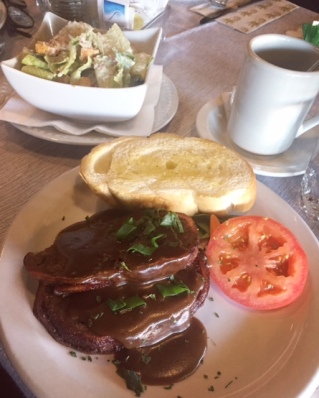 Not sure what exactly that makes me?

One of a kind? One said ‘perhaps rebellious?’, Hungry? 😜

All in all, it was a lovely afternoon celebrating Mom ☺️💕🎉

(While we partied, Mike began the flooring in our kitchen!!)

Post church that morning, we talked about how it’s really good that we don’t have to be teachers or preachers.

It takes a special person to be able to read the bible, message and history and tie them all together.

Connecting who was who and what meant what, when, etc… and in a way that makes sense to boot! 😉

Once home, pizzas on pita bread were whipped up and I regret to say that yes, I napped while the husband went to finish flooring our house🙈

I DID go see him later on, taking him hydration and snacks and also oohing and awing over the work he did 😉

Moral support is just as important as physical help, yes? 🙈