So we packed up and shipped out that morning, taking time to stop at a few places along the drive to Kona side.

Coconut Island was walked to, pretty much just to say that we had been to someplace called ‘Coconut Island’ :p 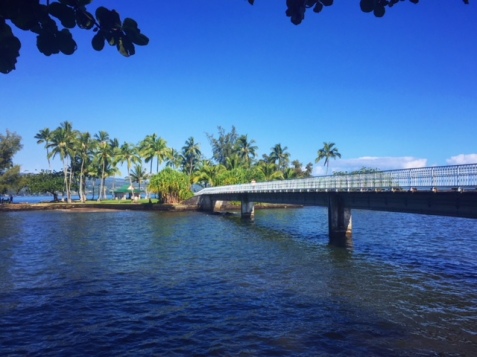 It’s a very small little outcropping of land that people mainly go to for relaxation I think.

We drove on, stopping to take a little-big walk, that lead to the Akaka waterfall.
Little because it wasn’t far distance wise but big as in it had many stairs and we took the harder way up, accidentally 😜 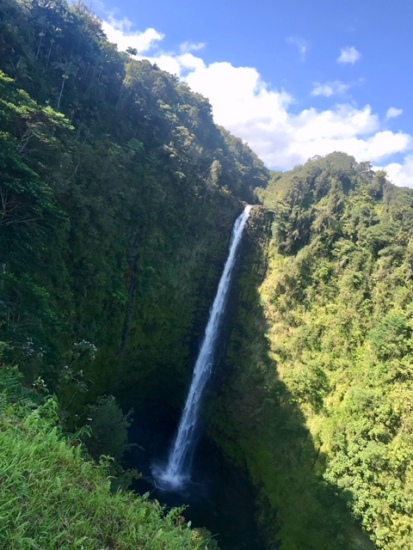 We glanced through a neat little place called ‘glass from the past’. 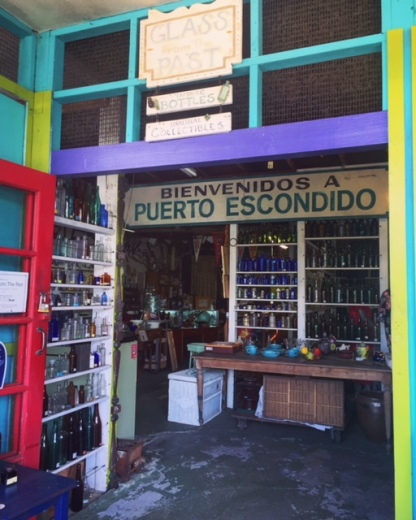 A store full of all kinds of glass bottles, jars, vases… you name it.
Very cute things but almost too many to pick from and prices were so so if you didn’t have a specific purpose for said bottle or vase 😉

The drive then passed in a smattering of snacking, talking, silence, child chatter and interestingly given directions 😜

We stopped for lunch at ‘Dan-o’s Doner’, getting some prettttty good meat with all the right toppings and a Greek garlic sauce.

As with most tasty meals… I have no photo evidence 😬🙈

The sizes were massive. 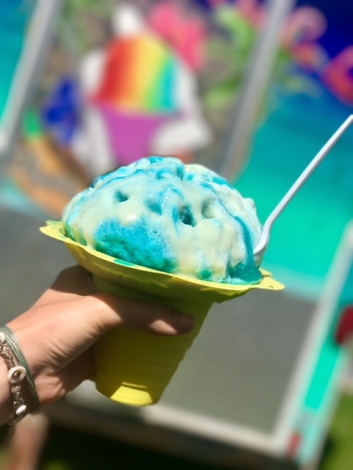 The texture SO fine… it was almost dry/powdery? 😳
The topping syrup good and the flavours strong… which was good for my coconut flavour and bad for the intense lemon that Mike had picked 😜
All in all It was a pleasing yet… slightly questionable experience 😂
Maybe we just take our shave ice too seriously😜

Filled to the brims we continued on, making it to Kona and stretching our limbs in the little shopping area for a while.

Mike and I considered some more ukuleles, still wondering if it would be worth the minute investment 😜 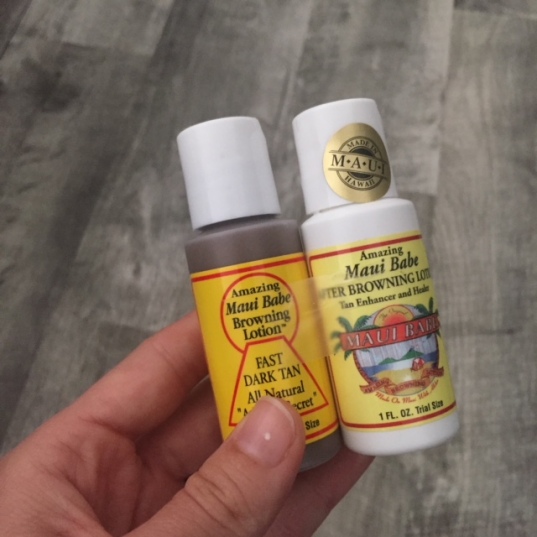 If you want to make full use of sunshine and it’s golden giving properties, use this stuff.
***Not a paid for advertisement 😜

We then went to check out the apartment place that we young adults would be residing in and we were happy with what greeted us 😊
A tastefully decorated, clean and nicely set up space.

It had a little sunroom/bedroom which made for an extra/cute feature and there was a shared pool to be used. 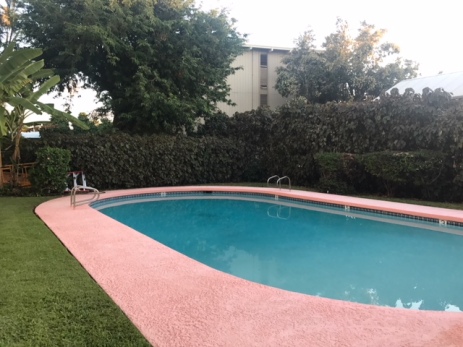 Mike ordered in pizza and us girls went out for a walk to do a little shoreline scanning before the food arrived. 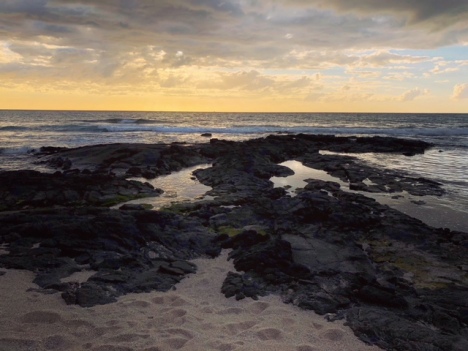 Pro and I were hunched over the lava rock strewn beach area, scouring for any shell bits, when a man from a nearby balcony yelled to us that there was a turtle close by!
We quickly stood and peered into the ocean, expecting to see a large shell floating or on the coral just in front of us… but nothing.
He yelled again to look down so our gaze dropped to the immediate shoreline, water washing onto sand but no turtle??
He again said to LOOK DOWN… I decided to follow his directions exactly, even though looking directly down seemed stupid because obviously we’d have noticed if we were beside a turtle 😏
Pro was nearly stepping on the turtle and I was nearly stepping on her…we were scant inches from its head and would have either walked on, or over it without a second glance.
We felt slightly retarded but in our defence, he totally looked like a rock 💁🏻‍♀️ 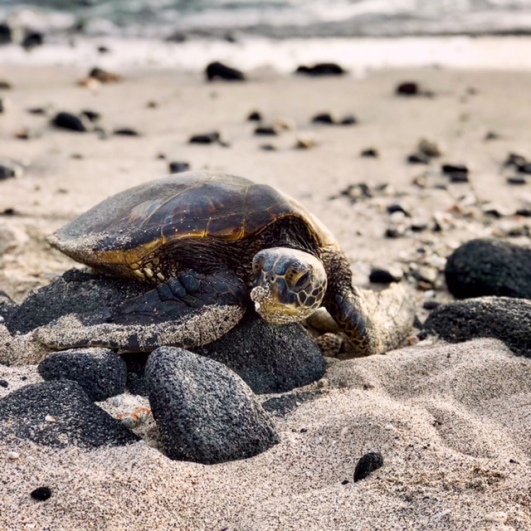 We backed up and called the far away wondering mother and niece back over to us so they could see the turtle too and there we stayed until it looked around a little before going back into the ocean.

First turtle spotting ✔️
Though it was more like ‘turtle tripping’ 🙈

We returned to tell our tale and eat pizza and then Mike and I drove the parents to the airport, their Hawaiian vacation ending 😔

We wanted to go to the beach now that one was nearer.
Or so we thought… turns out the beach we’d went to with Mom was still an hour away and all the other beaches were rocky or not much closer.

Either way we wanted beach and we wanted ocean.
We also needed food for any kind of expedition so some groceries were grabbed and the prices of groceries here once again marvelled at and not in a good way 😬

Thirty or so minutes later, we pulled up to Kua Bay beach.
The surf was much bigger than Hapuna beach’s and the sandy stretch itself a bit smaller but the kids were sick of driving so we decided to stay and try it out for a while 😊

Mike and the littlest rested in the shade for sometime and the sister and I stood ocean side watching the other little being frolic in the waves. 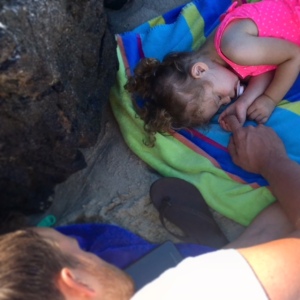 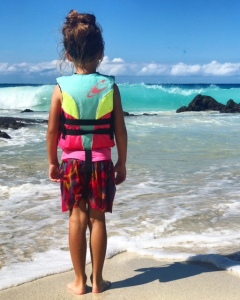 The water was a beautiful aqua mix there and the large waves awing to watch. 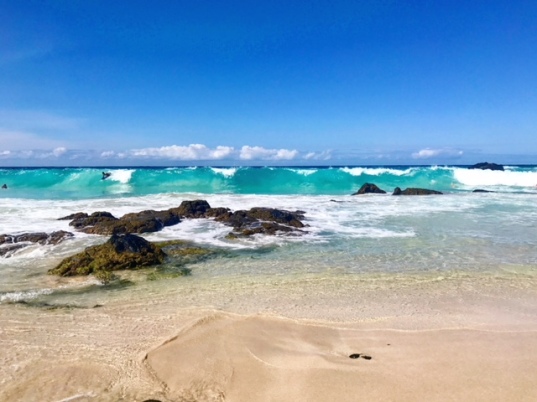 After some time, the lure of the faces filled with fun from playing in the waves, won me over and I entered into the vast blue beyond.

I cajoled Mike into joining me and after a few splashes, he did.
He actually proved very useful, being able to stand THROUGH the waves and lift me above them, rather than them crashing over top of me😏
That only lasted so long though and then I wanted to freely take on the waves by myself.
Some of the waves were easily 10 feet high and I, being of slight stature, did feel rather intimidated by the massive wall of foaming white and blue coming up and over me, yet it also gave a slight rush too… and then, a large crushing 🙄

I may have floated gracefully through a few but I may also have tumbled tumultuously through a few more than that 😜
I drilled my head on a piece of coral, all the while not considering the pain but thinking in disgust of what slime I must be in contact with.
Multiple waves whipped me off my feet and down into the sandy swirling current, somersaulting me into acute discomfort and once I and my sister had enough water beatings, we called it a day.
Sounds harsh and it kind of was but yet it was somehow also very enjoyable 😜

We left the beach tired, sun-kissed and sandy.
…So sandy 😬

We quickly popped into ‘Holy Donuts’ having heard good things about it and wanting to experience them for ourselves 🍩
S’more, red velvet, white chocolate macadamia nut and a loaded chocolate were the flavours we decided to take back with us. 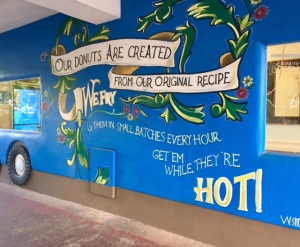 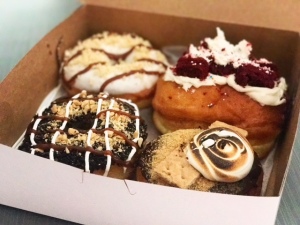 The homemade marshmallow filling in the s’more donut was my favourite, making me want a bowl of the creamy fluff alone. The flavours and toppings were all really good, we just found the donuts themselves to be a big large and the bread part itself not that thrilling but the staff was super friendly and who can resist that name 😉

By the time everyone had washed the oceans throw up off, we headed out again, but this time only taking a short walk to the same shoreline as the night before.

We got there right at sunset and it was a lovely sight to behold.
A lady pointed out a turtle, which we would have again probably missed seeing 😜 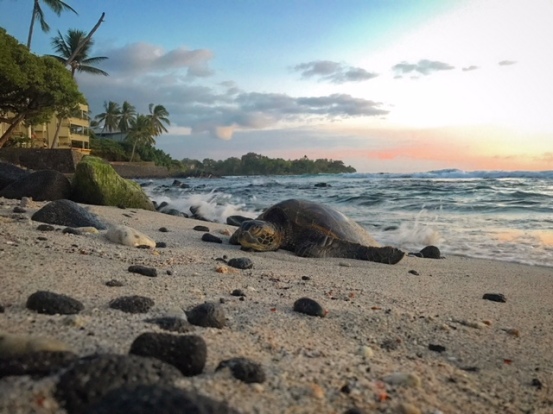 We hung out there, watching that turtle rest awhile and leave and then seeing another come in to shore, taking pictures and treasure-seeking in between 😉 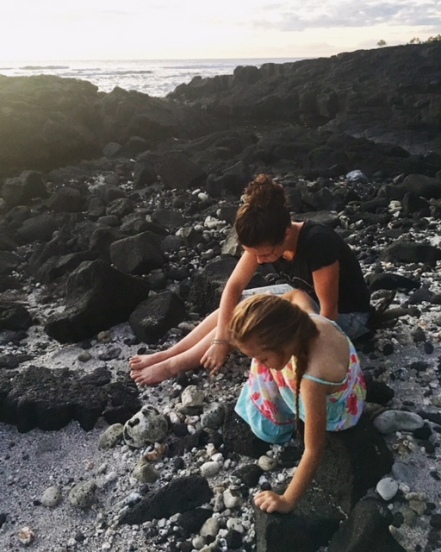