After a restless first night at our place, which isn’t a rare form of sleep for me, anywhere, I got up to release the kittens from the pantry, because that’s where kittens are to be kept don’t you know? 😜

They made my morning blogging start slowly, proving to be pretty entertaining distractions😏

Mike did some work and I tried to tidy a few things before we headed over to moms.
We needed food and showers as those were items still currently unavailable at our own place 😜

I quickly made a coconut pie while there.
Needing to get the pie testing finished and photographed so I could make the poster to go up in town, if I still wanted to try selling any before Christmas. 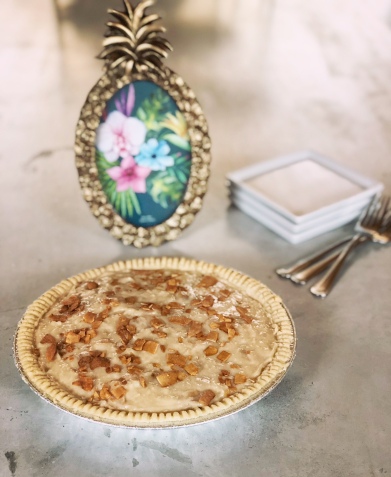 We ate brunch made by Mom and then the three of us went to Saskatoon.
Mike had to do stuff with the work vehicle and Costco and Homesense needed looking through 😏

I say looking but I mean touching and purchasing 😜 We found a number of things at Homesense to take back and try out in the house… which is both a good thing and a bad thing, as it feels better to spread purchases out a little 🙈

We ate at a small town restaurant during the drive home, poutine and burgers filling our bellies.

Groceries were quickly sorted at the parents house and then we headed back to our place.

Spending the evening unpacking and sorting, a pass time I feel we will be immersed in for some time to come 😉

Mike had risen early and left with Dad and the Bro to go look at some machinery a ways away.

Needing some time OUT of the house 😋

I woke up to enjoy the first single serving brewed coffee at the house and to let out the kittens to bond more 😉👌🏻☕️
The most perfect of mornings, in my mind 💕

Then, I decided to try to clean up… the basement 😬
Mike had tried to construct a small cardboard area for the kittens to be in but they’d escaped and then they escaped the rebuild too 🙄
So half cardboard walls were tangled between boxes, containers, tools, paint buckets and more.
Making it a maze of disgust to have to navigate through 😬

So I began the process and it felt so good to begin seeing the floor again, even if said floor was filthy too 😜

The sister and mother had decided to walk to my place, as my sister had yet to see it completed.
They came in and her genuine gushing compliments had me thinking she’d be a good person to have over often, if not purely for self-esteem reasons 😉😜💕

I made us all some coffee and a small house tour was given before I left with them, so I could go to Moms to gather more goods and to bake as well 🏠😊🍽
I wasn’t feeling up to to the challenge of navigating through my unsorted kitchen yet and baking at their place meant they’d get half of the pie, so I wouldn’t eat the whole thing 😜

Lemon meringue, my utmost favourite, was my utmost flop as well 😏
Of course it would go that way.

The lemon filling itself was fine but the meringue not so much, as I was trying a recipe that was not my mother’s (first mistake) and didn’t beat the eggs enough before adding in the hot liquids so that it would be a pre cooked meringue (second mistake).

So instead of luscious peaks of perfection, it was a sad, oozy cloud of creaminess.
Which taste wise was still rather good, if not a little runny but presentation levels were on an all time low 😜
As was moral 😂

We ended up having supper there and it was just like old times ☺️
You know, like back on Thursday.

One thought on “Furnishings And Flavoured Lessons”