The staircase, a spot small enough, you may think it doesn’t require a ‘reveal’ all of its own… but in this instance, I believe it does 😜

The few stair rails that were there, were removed, so things could be more easily moved up and down and they never got put back… eventually a stair rail attached to the wall will go up, we just haven’t found one/been that concerned with it as of yet.

Mike ripped out the odd, built out ceiling, covered in the same cedar planks that had been in the bedrooms, so he could walk upstairs without having to duck  😜
It was a really odd ‘feature’ as behind it was just open, yet unusable space… so to take it away and finish the ceiling on the same angles as the rest of the upstairs walls, made for a much more open, spacious feeling. 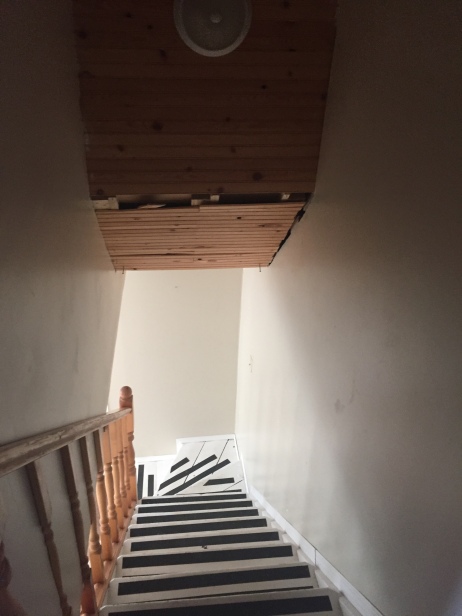 The grippy strips stuck on each step for traction, were removed and then the stairs sanded.

I love the artwork that meets the eye every time we walk downstairs… I still can’t find the name of the lady who painted it, but we bought it at the ‘Everything Country Sale’, the spring we moved here.

The first thing you’ll see at the top of the stairs, is a little, handmade door Michiel crafted, as a cover for the attic crawl space behind the walls.
I don’t like children much but I do like child like things 🤪

Note the adult sized door to the left, for size reference .

I originally assumed I’d be painting the stairs, either white or an accent color but after they were sanded and seen with the new white wall as and grey trim, I liked the rougher look.

Keeping them ‘original’ was kind of fun too, as the stairs themselves are the only thing we didn’t rip out and/or replace in the entire house pretty much 🤪 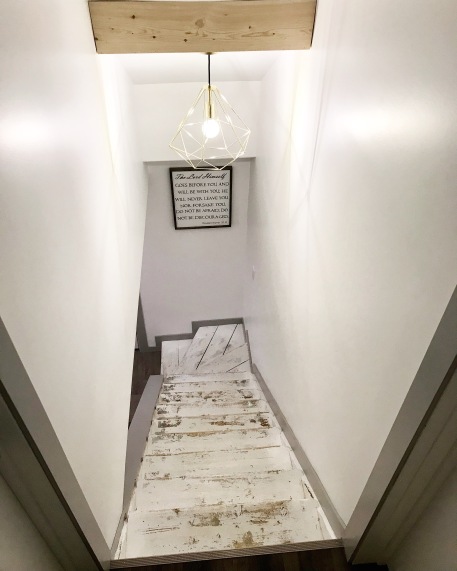 I think the geometric light we bought in Italy, accents the whole space perfectly 😉👌🏻💕 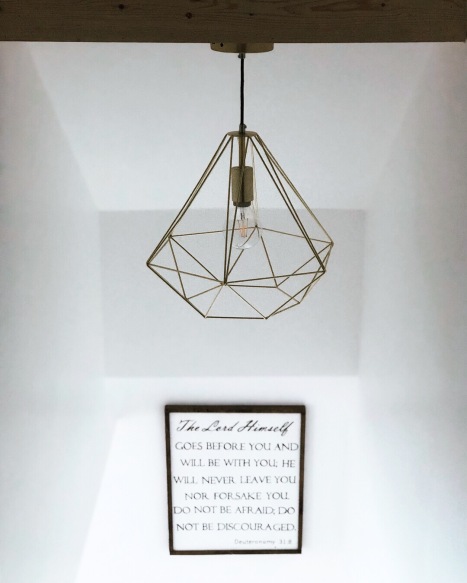 Now, that part of the house is clean, eye-pleasing area… and no longer a head hitting one 😉