It’s been so long since I wrote a blog post pertaining to the house and it’s makeover, I hardly know where to begin!

For starters, I’ll tell you what room it is 😉

The most important part of a house aside from the loo…. the kitchen! 😄 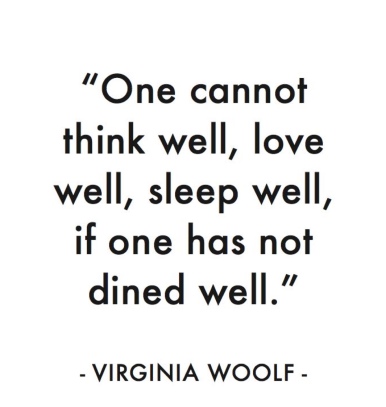 When we bought the place back in spring of 2017, this is how it looked. 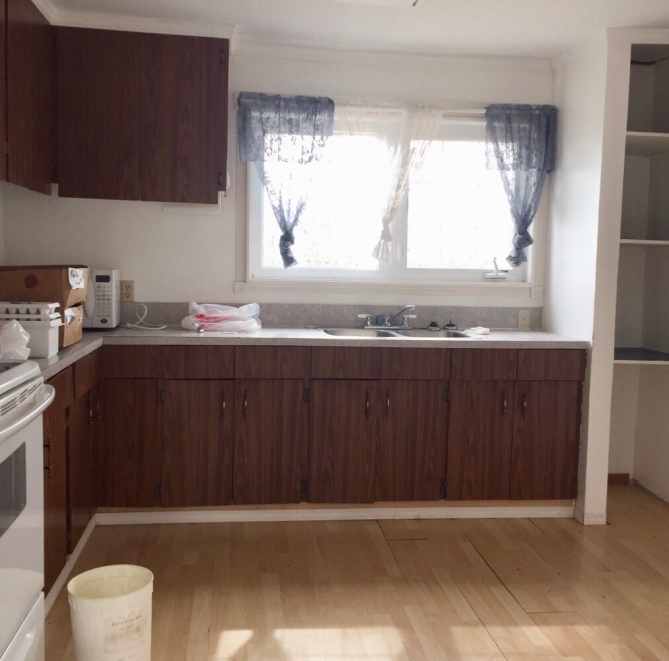 Oddly raised counters, strange built-in shelf type thing to kind of-but not really hide a pipe, fridge sticking out, no dining area and an unfinished, closet like space with a sagging door (door not pictured).

Everything was torn out. I mean everything.

Maybe this picture above is the point where I should have felt some deep concern? 😉

Mom had saved her old kitchen cupboards and we painted them.
Taking them from a yellowed I believe what’s called, ‘almond’ to fresh white and so far they’ve held up very well. 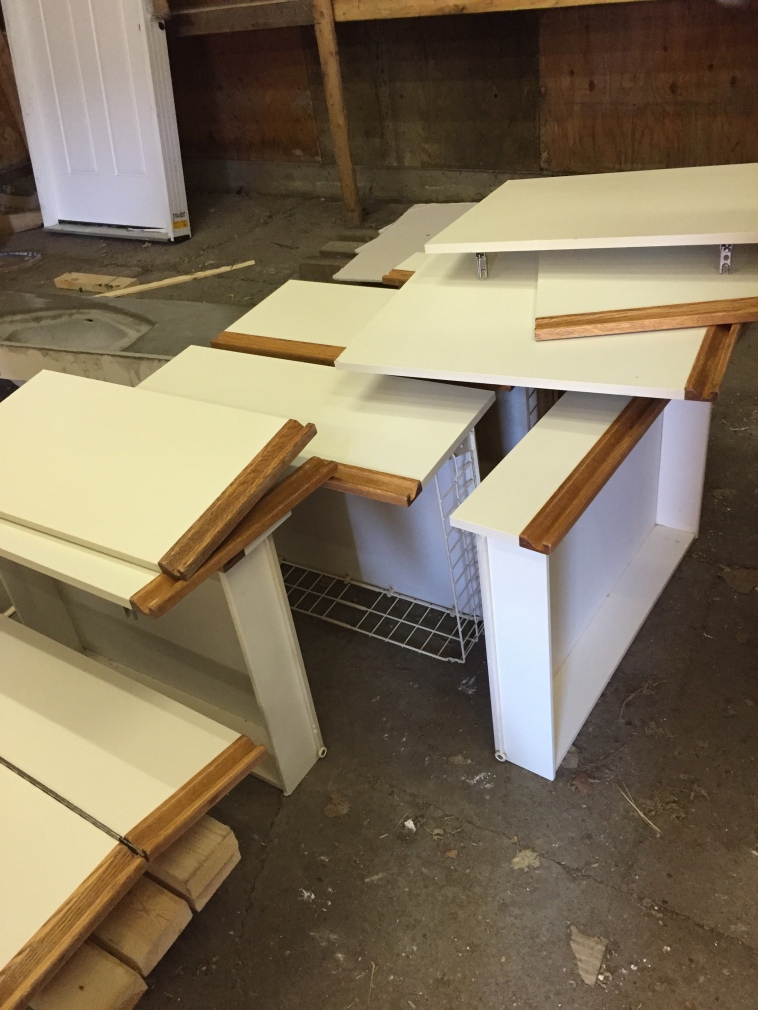 Giving the fronts a light sanding before using a heavy duty all-surface paint and a gold spray paint for the also sanded, wooden handles.

We bought our faux marble countertop from Rona and just in time it would seem because a few months later when trying to figure out what to create our island out of, we found out they’d discontinued it.

It took a long time to figure out a kitchen island.
Mostly because I couldn’t decide on all the different factors 🤪
Size, style, top, sides etc.
We wanted it to be comfortably large enough but not so big that it hindered movement and opening of the fridge and stove.

As I mentioned, our countertop had been discontinued and because it would be a custom shape with multiple finished sides, the price wasn’t the happiest number we’d ever heard.

I don’t like working on wood countertops so that was a no and Mike had to rap his head around figuring out a process to make a cement top, that would be light enough.

I wanted it closed off in the middle, he wanted it open… It’s closed 😜👌🏻

He made one top and it turned out to be super heavy but he learned a bit and then dove right into making a second.
He put two packs of white cement dye in as well, as I wanted a lighter color rather than darker.

Speaking of ‘doing again,’ the other great aspect of the concrete top is the cost. Or lack of 😏
I know not everyone has the products, space or time available to create their own top like Mike did but IF, than it’s a fraction of the cost and if the quality decreases with time and ware, another can be made no problem.
The estimated cost for a custom cut, faux marble piece, with sides that wouldn’t even be an exact match to our existing, was around $600.
The concrete project? $80.

We bought two antique style doors from our local antique store and used those to create the base for our island.

I’d thought I’d have to paint them white or grey but once it was done, we kind of loved it how it was and it tied in the colors from the pantry door and trunks we had in other parts of the house, perfectly.

The pantry door was found at the local re-store and I white washed it, only to hate it and sand it all off back to how it was and then we frosted the glass ourselves using a simple frosting spray we purchased from Michael’s ☺️

Mike searched the webs for a gold sink tap for me and found one for $100 from China 👌🏻 (Later, I did find out Ikea also carries one if we ever need one again, with a slightly easier finding process 😜)

Our black granite sink was a ‘brand new-in the box’ kijiji find!

The house came with a working fridge and stove, which we happily installed back into the space.
The fridge going into a special, built-in area Mike had thought up 👌🏻

We found our kitchen light fixture at the same wholesale store we’d found our entry fixture and it worked well because I didn’t want a distracting light but Mike wanted a bit of a lower one, thus, glass.
BUT, it’s imperfect glass,so it doesn’t show grit and grime at allllll like most glass lights

The newest kitchen enhancement is the shelves, which I envisioned a rather specific way as I wanted them to tie in the island and Mike executed the vision splendidly, after some verbal pushing from me, as he is possibly getting tired of my ideas😜

The brackets for said shelves are from Ikea, just plain wooden ones painted gold, as we couldn’t find any gold bracket sets that weren’t ridiculously expensive in this neck of the woods.

I’m sure there is much more I could write and explain about the entire process and how everything came about but let’s be real, we really just want the ‘after’ photos 😜

So, there you have it, the kitchen, a written tour through the heart of our home, so to speak… now scroll down to view it 😉 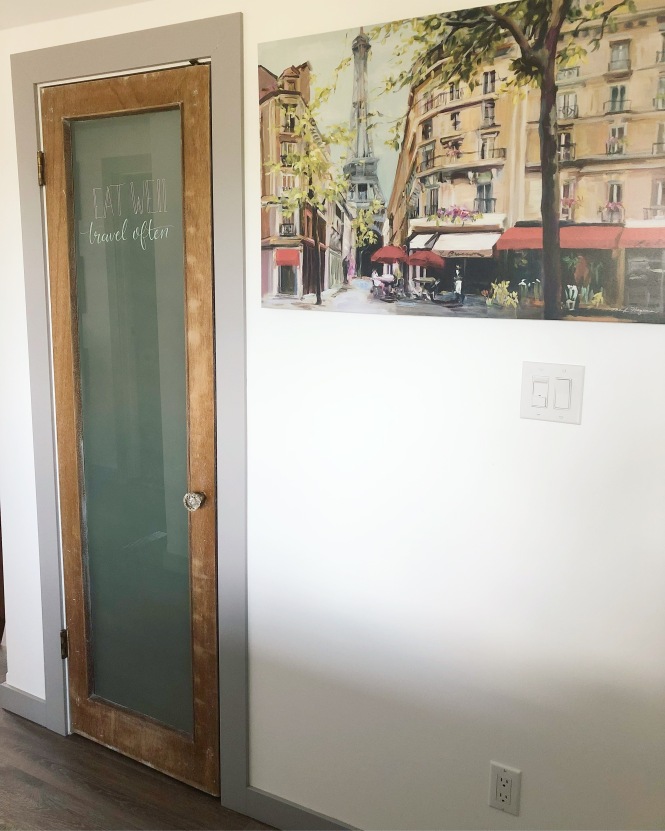 The art piece was purchased at Winners and we both loved how it depicted Paris from a different view than usual and once you’ve traveled to a popular place together, it doesn’t seem so cliche to have a picture of it in your home 😜

Matching pitcher and glasses are from Superstore, the totally frivolous, special occasion style glassware was just purchased at Home Sense and the bowls are Pioneer Woman brand, purchased at Walmart. The pink vase was brought over from Holland so good luck with getting your hands on one 😜 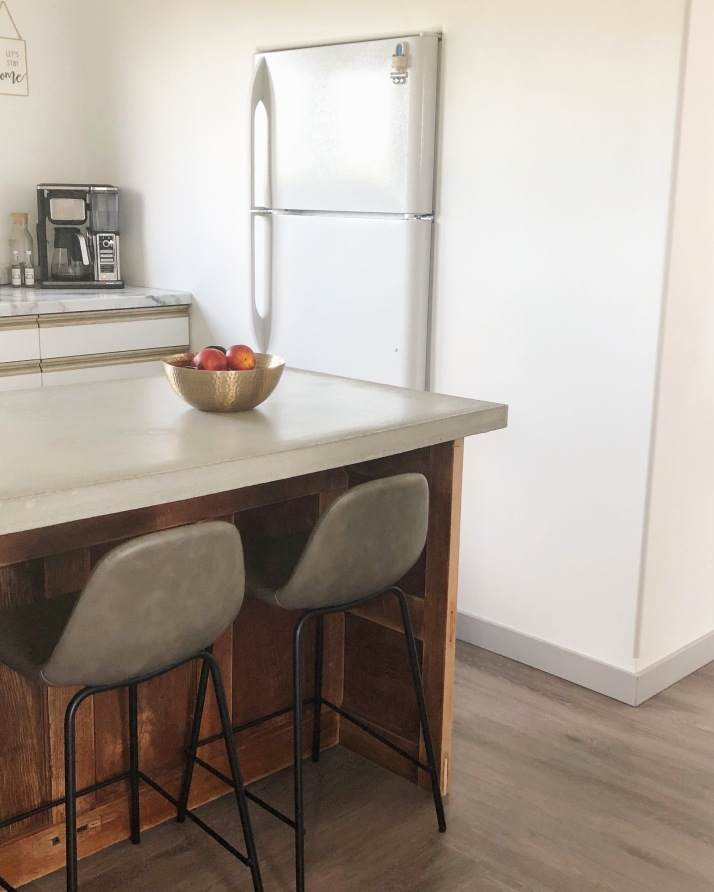 Our barstools are from Wayfair.ca 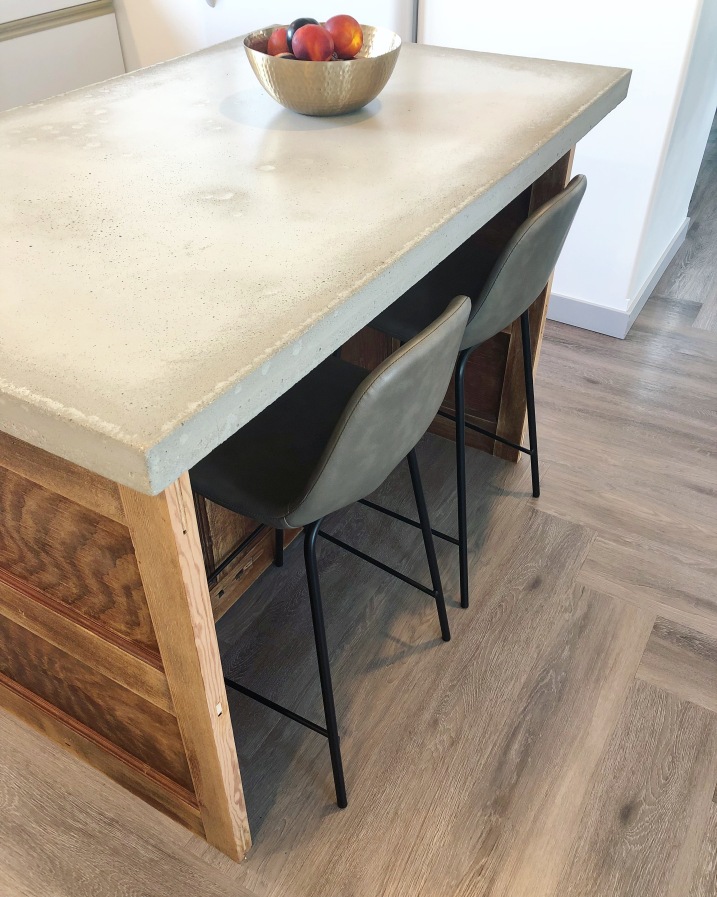 The end results and the end of this post…

I may try to create a small video of the space later on, but to do that, I needed more than my own two hands and Mikes were covered in concrete when I went to begin and now I have no desire to prolong the posting of this spaces outcome :p

If you have any questions about the process or where something is from, just ask ! 🙂

6 thoughts on “How We Now ‘Dine Well’ – A Kitchen Transformation”