We awoke with no real plans for the day… the gusting winds had woke us a couple of times during the night and they had carried on into the morning/day as well.

We decided to go check out the penguins at Boulders Beach, as it wasn’t long after they open and we figured it would be less busy.
Our assumption was correct thankfully and we paid to go see the penguins. Paying around $15 per person, since we weren’t local… the locals pay only $3 😏

Walking down the path to the beach with large towering rocks, which were creating a sheltered, cove like area, we spotted our first few penguins 😏👍🏻
Unfortunately for me we had to crawl through a mini tunnel created by two boulders, to get to the good spot.
Though it was really rather wide and fairly short in length, it was enough to cause shortness of breath, as I hate enclosed spaces 😬 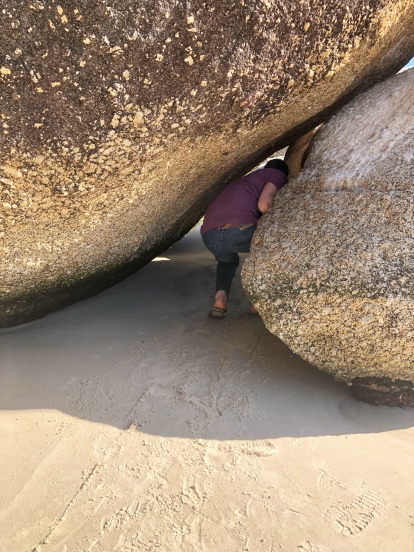 Which is so dumb… it would make more sense if Mich, the larger of us 🤪 wasn’t a fan of tight spots but no, it’s me 🙈 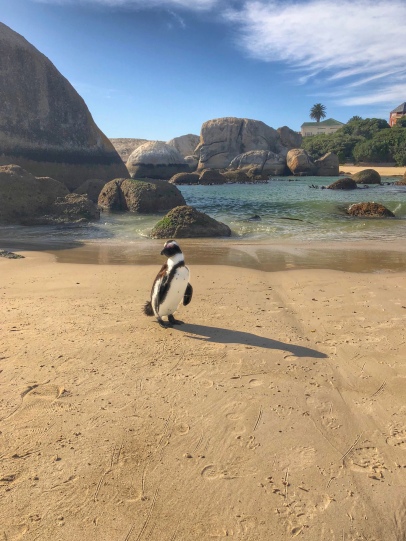 We hung out with the penguins awhile, laughing at their comical shuffle/sway of a walk and then we walked a higher boardwalk path, to view them at the other part of the beach.

We seen many with eggs high up the hillside, far from the beach and then we actually got to see a mixture of baby penguins at the viewing spot from the beach, some small and not leaving the nest… some looking almost fully grown but still trailing after their mothers (or fathers I guess, since penguins take turns I think? 🤪)

Post penguin-ing, we went out for breakfast.
The menu descriptions, presentation and ceiling art piece were lovely & Mikes was rather tasty, mine not so much, but oh well 🤪 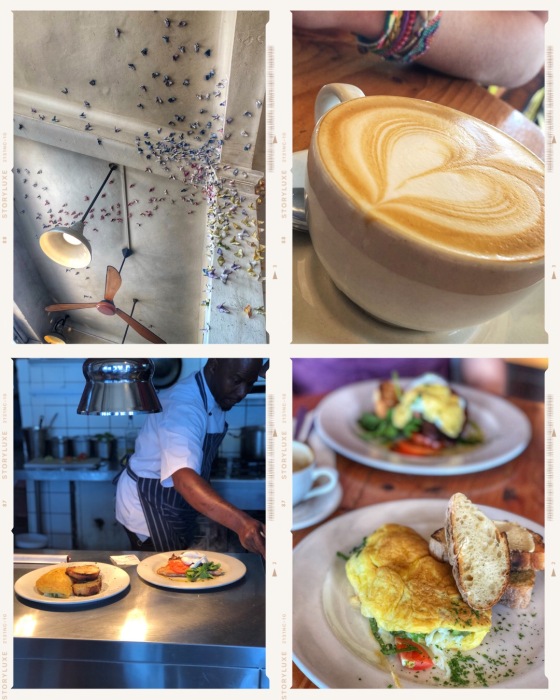 When we finished eating there, we walked around the side of the building to their bakery, where I quickly spotted lemon meringues!

I haven’t been anywhere to sample a new lemon meringue in some time, so I was quite pleased ☺️
We also got a Florentine cookie and Mike chose an apple tart…I feel like it’s such a typical thing for a guy to pick an apple tart… am I right?? 🤪
I know within my own family I am 🙈

We then walked towards the Kalk Bay, where they had fresh fish being sold on tables and cement, being kept fresher by having buckets of ocean water thrown over them.

There were also fish drying in the sun, strung out on ropes and lets just say the overall scent of a fish market was unmistakable 😉

The fishing boats are so captivating to look at. 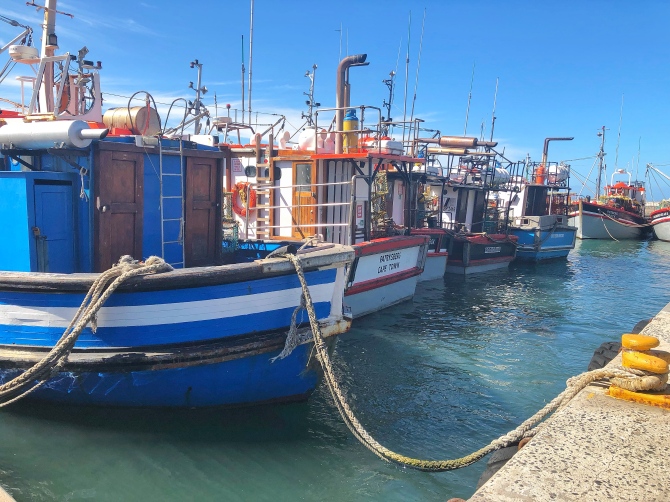 Like old houses, the old (or maybe simply weathered) boats, each call out, holding their own stories aboard deck… whispering them out in a colourful array of traps, ropes, masts & names, all gently swaying atop the dark aqua water. 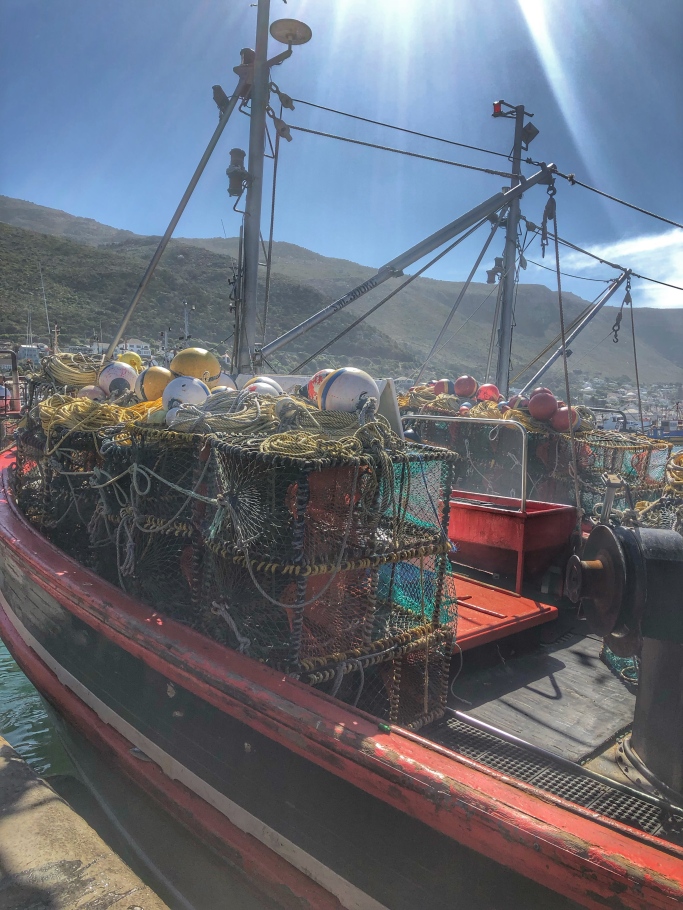 A sea lion climbed up some steps and awaited fish scraps and as we walked further down the pier, there was a mom and it’s baby laying in the sun 🌤 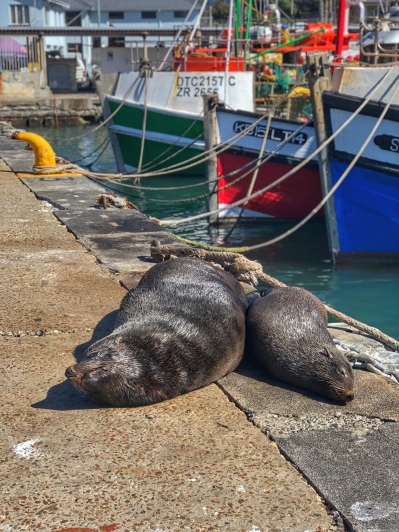 They calmly lay relaxing, scratching against the concrete and sunning, not minding the people stopping to gawk one bit 😏

In the car we quickly ate our treats from the Olympic Bakery, they were all tasty if not a bit messy, so it’s a good thing I hoarded those wash cloth thingies the plane had given out during our flight over from Joburg🤪👍🏻

Mike then went for a haircut… deciding it was worth risking before our photo shoot the next day 🤓
It turned out good actually, so all was well 😂 Town was then explored a little more, before we drove back to our place. 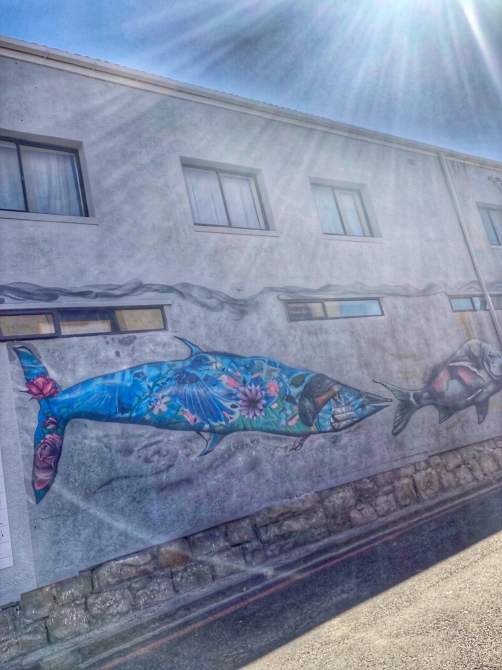 Since the owners were out and said we were welcome to the pool space that is attached to their part of the home, we took advantage of that… the pool was a bit to brisk to temp a swim but the sunbathing was lovely 😉👌🏻

We went out to eat at Saveur again, as they had a burger special going, ‘two for one’… Mikes was good but mine was on a dried out bun and chewy and the onion rings for us both, were not crisp whatsoever.
So I guess stick to steaks if ever you get the chance to eat there 🤪 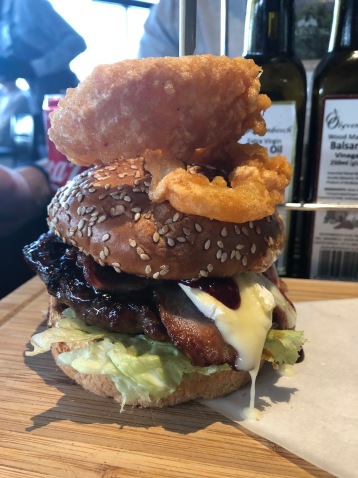 We finally had an actual ‘hot’ day with little wind so that was nice to awake to… sitting by the balcony with coffee, still enjoying the view as much as the first day ☺️👌🏻🌅

We decided to find a beach to relax on, as that had yet to be done and I was really missing that aspect of vacationing.

It turned out to be much windier down the hill at the beach, so we explored awhile rather than sitting still, seeing what goodies the shoreline had to offer us 😉 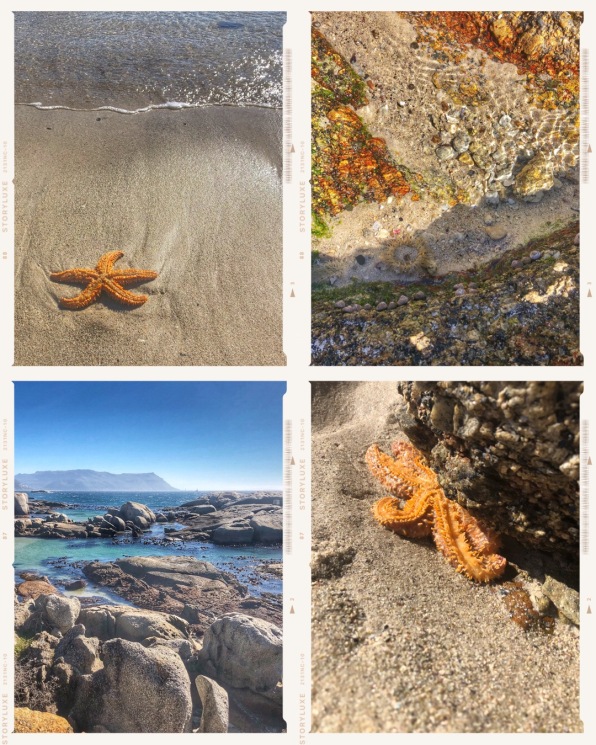 We seen a starfish splayed on the sand and then many others hidden (stuck😬) in between crevices and little tide pools.
It was our first starfish spotting ‘in the wild’ 🤪

That beach was too chilly to sit at post exploration, so we drove across the peninsula to get away from it, stopping along the way for some fresh juice 🥤

The beach on the Atlantic side, was much nicer. The sunshine being easily felt and shells being present 😉🙌🏻 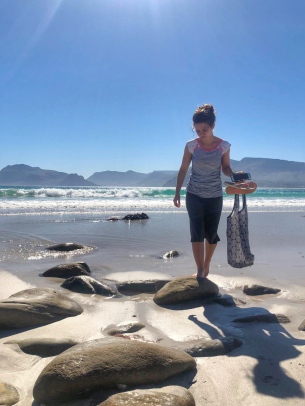 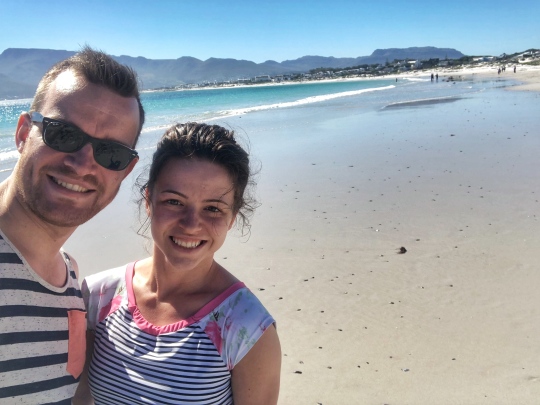 Mike wanted fish from ‘Kalky’s fish and chips’ for lunch.. where as I was getting turned off of the fish eating idea by the numerous fishy smells we passed by daily 🤪

So we went for a bite at ‘Salt’, so that Mike could get his fish the next day as we left Simonstown.

It seems like once I get one so-so meal (two the previous day) it always landslides for me 🤪
I wanted the sage pasta listed but it wasn’t available until the next day, so I thought I’d try the cauliflower couscous salad with herbs and pistachios, to eat along with Mikes pork and tzatziki flatbread. 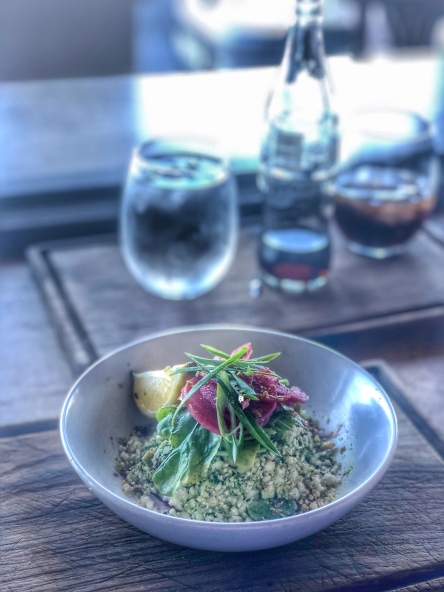 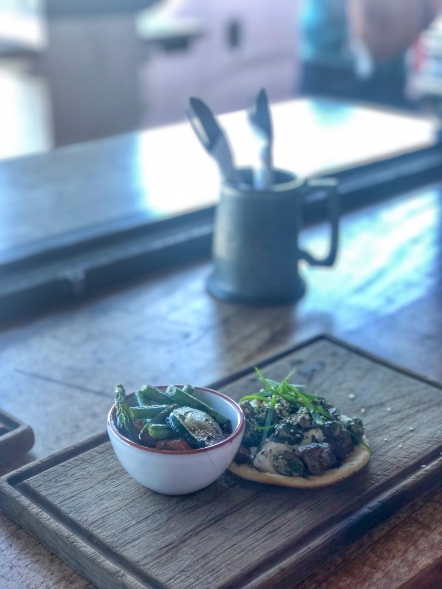 Turns out, the dish had no couscous, just cold crumbled cauliflower and though it was actually very tasty it was also very green and I was longing for some a warmer, heartier substance 😅

But it DID taste nice and Mikes dish tasted very good, so we both shared and that was that 😏 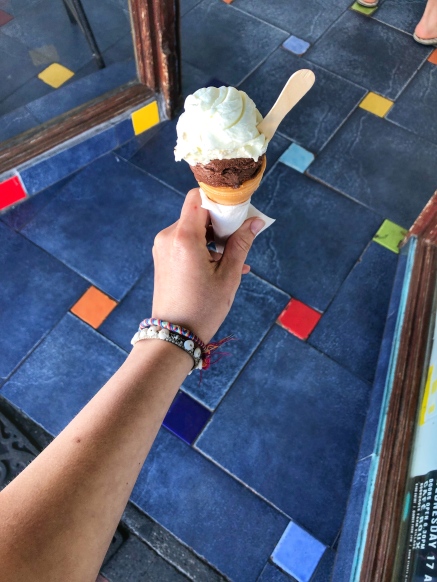 We freshened up and left for Llandudno Beach, where we would be getting our first professional photos taken since our wedding.
I figured we should make use of the beachy background, while we had it available to us 💁🏻‍♀️

The GPS took us the scenic route over Chapman’s Peak Drive and it was very pretty.
A little windy and high up without much for guard rails, but pretty 😉

We wondered why the row of vehicles in front of us kept stopping and driving so slowly but when we looked out to the ocean we realized why.
Far, far out, you could spot whales spouting and the odd fin flipping up 😄
Though far away, it was fun to see them surfacing all across the horizon ☺️🐋

We made it to the beach and met Melissa our photographer… luckily I had totally forget that other humans would also be on the beach with us, so I didn’t go anticipating the feeling of being watched and looking dumb 🤪

Though feeling awkward smiling at each other while standing ocean side, came naturally anyways 😅🙈
She was very nice and we are excitedly and slightly anxiously, awaiting the results 🤞🏻☺️

Instead deciding to try out ‘Cattle Barren’.
We shouldn’t have 🤪
We waited awhile to even get our drinks, then the meal wait began… after 45 or so minutes our waitress came out to apologize for the wait, as the kitchen had too many orders go through at once.
After one hour our meal finally came out, only to have the meat room temperature and cooked to a state of hardly even rare 🙈
We usually don’t mind if a steak is decently rare but this was even too much for us.
That and the piece of bone I got, the gritty squash & the overcooked hard rice, was enough that we left without a bill to pay but also without having filled any of our now past hungry appetites 🤪

We felt like we should still eat so we didn’t get hungry during the night, so we went to ‘Berthas’ and got some food.
It was good but we were almost over being hungry so we didn’t eat much, packing up the leftovers to have for the next day 🤪 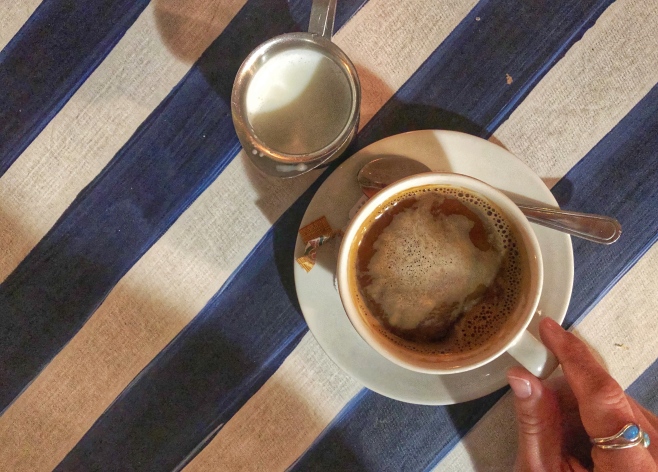 All of this was experienced with wet, sandy clothing rubbing against our legs as we’d gotten wet during the photo shoot, so we were really ready to get back to our place and sleep by the time that happened 🙈