Mich and I headed to Intratuin, a shopping centre for gardening, home and building. 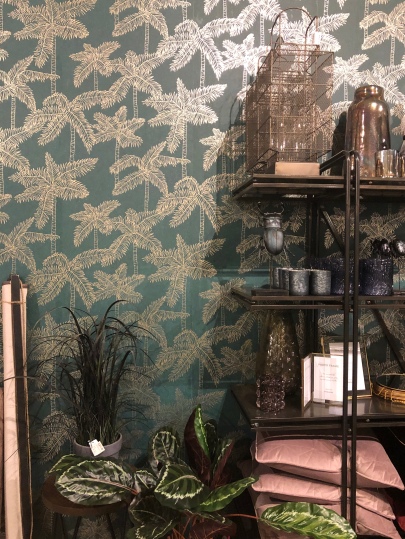 It was an indoor space with multiple stores, which was kind of required for the days weather indecision, going between rain, wind, sun, repeat 🤪

Lunch was eaten at ‘Baran’ in Germany. 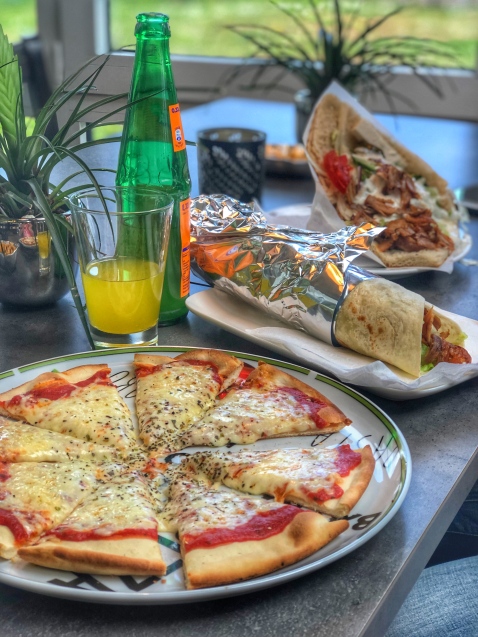 Splitting a margarita pizza and each having our own form of Döner Kabab.
We left, bellies full, plates empty, Döner craving satisfied 🤓

Our nieces were then picked up, so we could take them out for some ice cream ☺️ 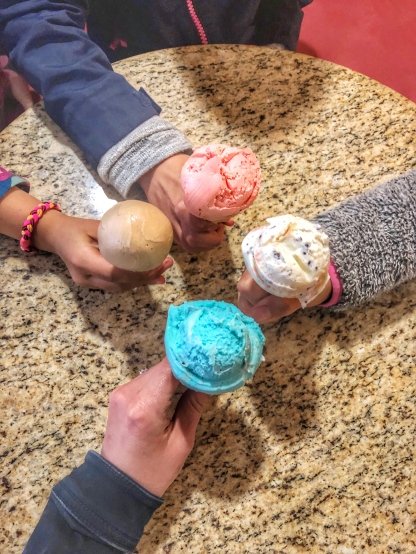 Some little stores were looked in and the park stopped at and then a second ice cream was called for before heading to the German grocery store for schnitzel breading, meat seasoning and salami 🤓

The girls were then taken home, to let their two ice creams worth of energy run out there 🤪
We sat outside with coffee and sweets, the sun breaking through the clouds finally and when the win was calm, it was plenty hot enough to be enjoyable 👍🏻

One last broccoli tart was made for us for dinner and again, greatly enjoyed 😉👍🏻 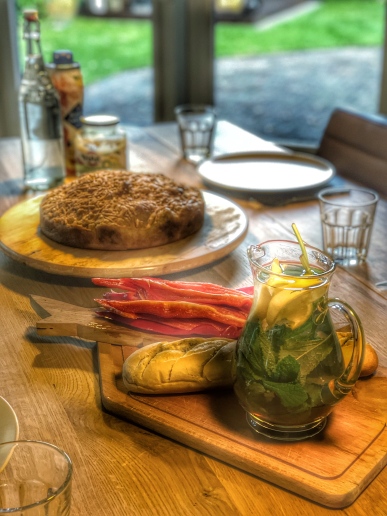 Mich and I went to church in Germany again, enjoying a service preached by our old pastor. 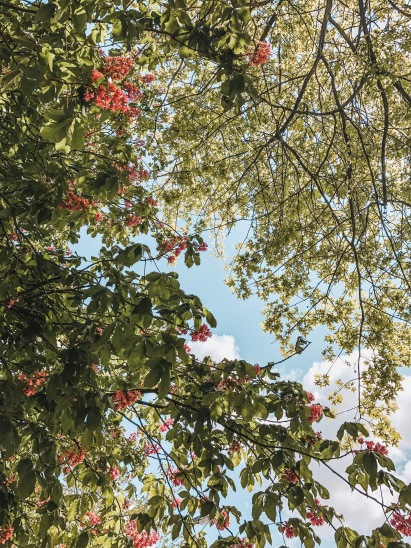 We also enjoyed the same Greek restaurant again too, thinking it was perhaps a tad repetitive but also knowing we wouldn’t be having it again any time soon so repetition won out 🤪👍🏻 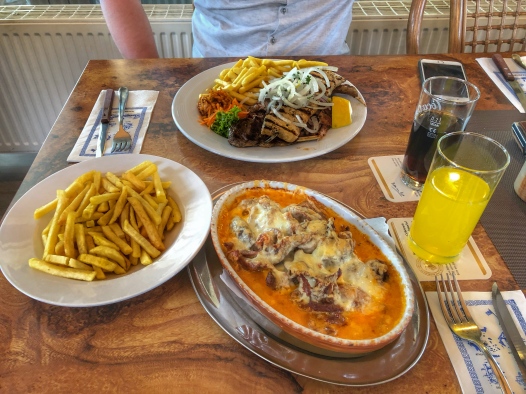 After lunch together, we drove to the house of some friends to visit awhile.
She whipped up a ‘typical Dutch’ loaf for us, which was very tasty. Savoury more than overly sweet and I hadn’t actually eaten it before.
Many people seem to have forgotten that I lived in Europe for over a year, telling me ‘very Dutch’ things and pointing out landmarks as if I have never been, so this loaf was an actual for real ‘first’ 😉

On our drive back to the house, this building was passed. 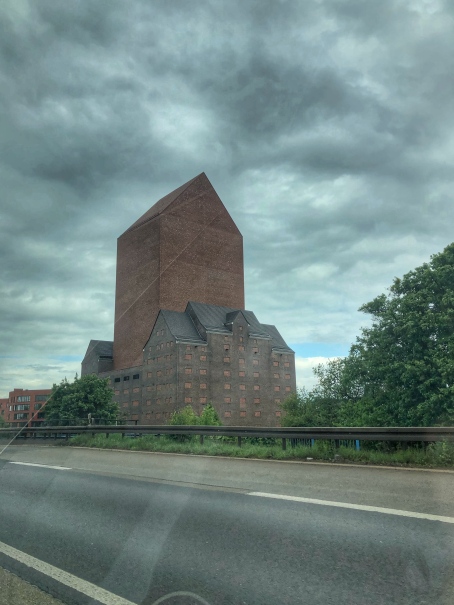 It had been driven by many a time before and every time, the oddity of it raised questions.
It’s windowless exterior can’t help but bring up creepy images of what may be happening inside 🙈

The rest of the evening was spent leisurely at the house, eating this and that and then packing up for spending the night at the Dutch island of Texel the next day.

Come Monday, it would be the first time that the children of my parents-in-law, their spouses and offspring would all be together, so it had been decided to take two days off and spend it all together at the Island.

The parents-in-law left early that morning to retrieve the brother and sister-in-law that were flying in from the states so we were going to catch a ride to the island with the other brother, sister-in-law and their kiddos.

That wasn’t until later in the morning so Mich used that time to quickly go visit a friend he’d yet to see before we hopped in with the siblings and nieces and headed to Texel.

They wanted to go to a museum with the kids for a little while in the town of Den Helder and Mich and I aren’t really museum folk, plus didn’t want to spend money on it, so we went and ate instead 🤪👍🏻 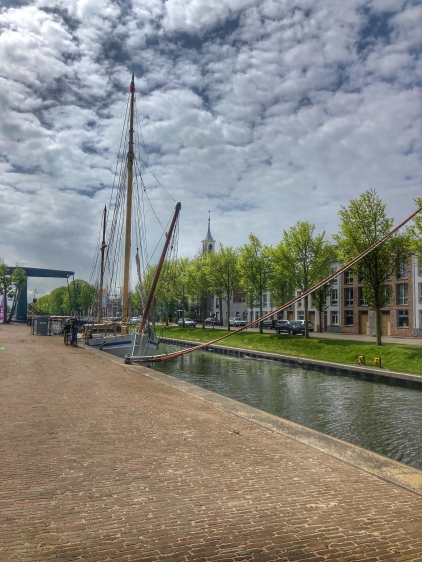 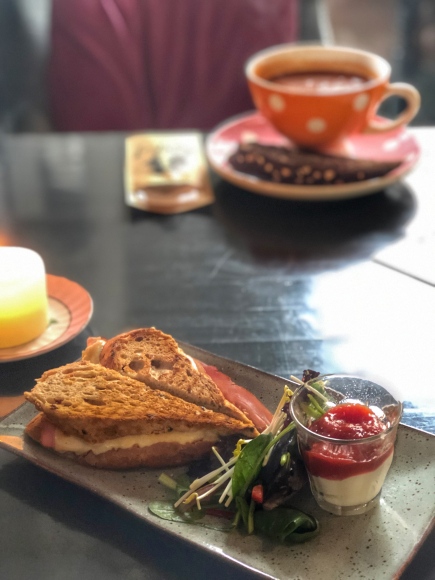 Back to the van and into the boat we went, taking a quick ferry across to the island. 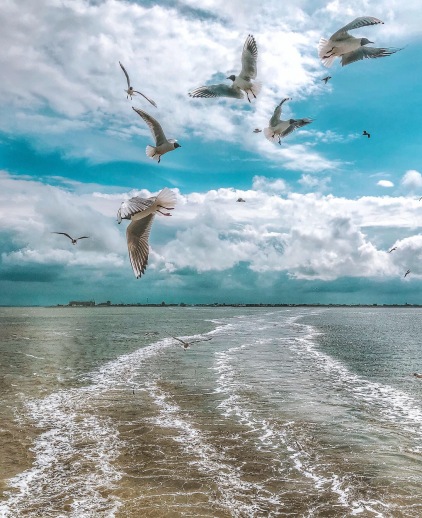 The birds greatly enjoyed the snacks that had actually been brought for the humans to enjoy, but the humans ended up enjoying it most, via the birds entertainment 🤪👍🏻

Our ‘StayOkay’ hostel hotel was not one of our more luxurious stays but the beds were actually pretty comfy, the comforters thicker than most hotels and it felt clean, if only bare 😂
None of which are bad things and the ‘worst bit’ was probably the slightly jail-esque ambiance… not that we’ve been in jail to know but I feel like I can better image what a cell MAY feel like now 🤪

All the family arrived, settling into their rooms and freshening up before heading out to eat supper together before the family photoshoot at the beach. 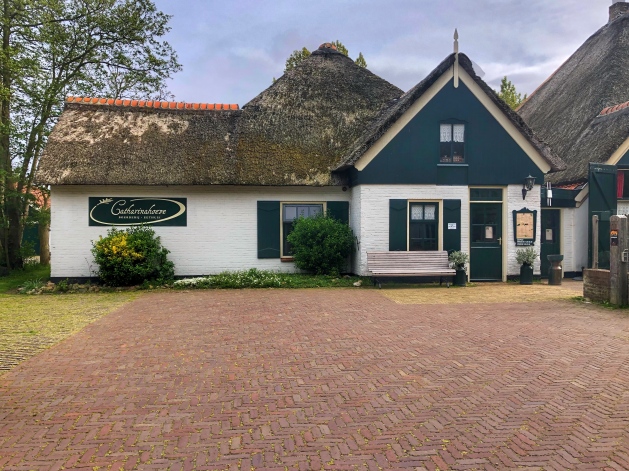 The very cold beach 🙈🤪
Weather hadn’t cooperated and it was a windy, cloud covered, seaside temperature of 7 💨 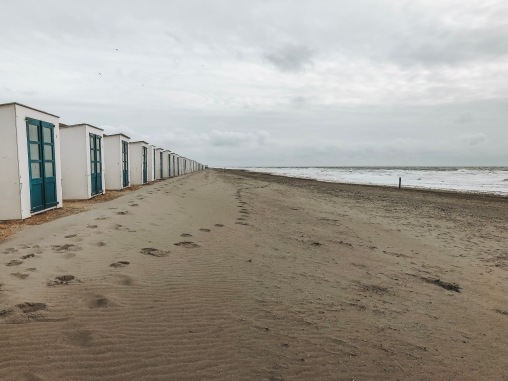 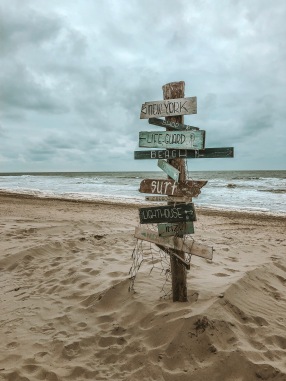 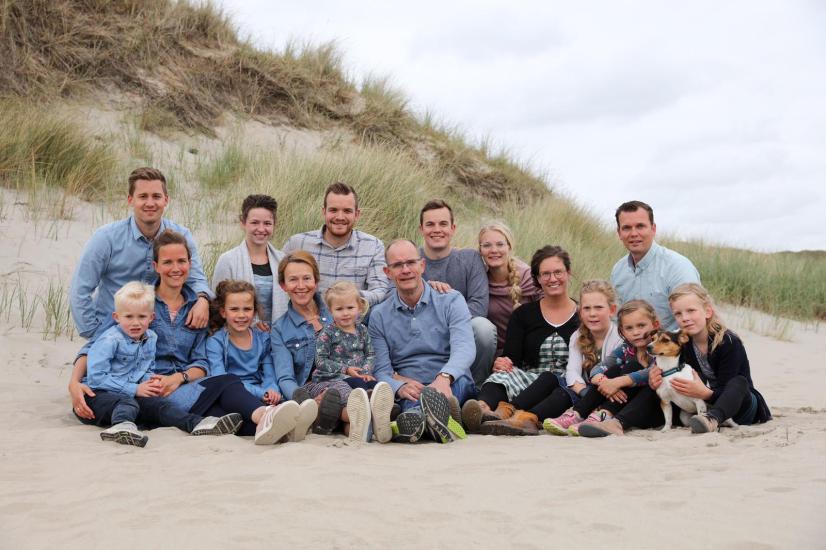 Shivering strongly between pictures but getting it done within around 30 minutes and then heading into the restaurant that was situated on the beach. 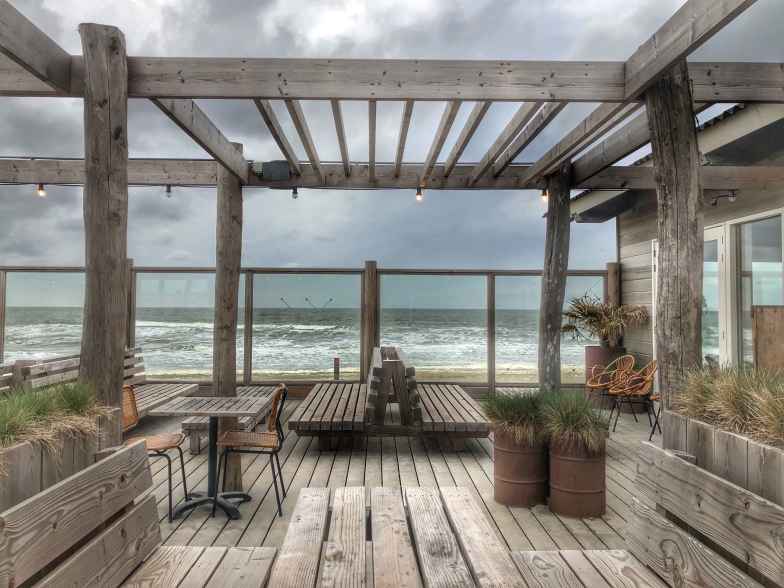 I love the beach restaurants there…so many truly capture the coastal, beach vibe and have the weathered wood look 👌🏻🌊🐚🦀 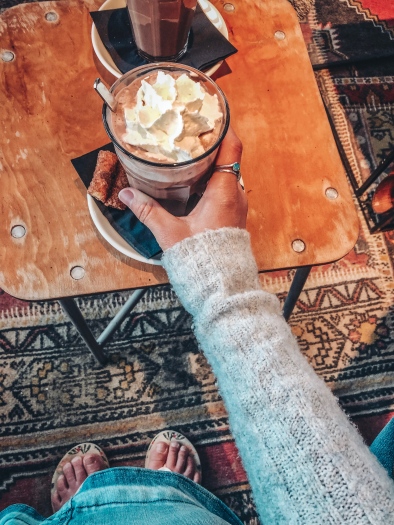 From the hot chocolate sipping we went back to our hotel, some staying outside to play soccer, some going into the seating area to be out of the elements.
You can figure out for yourself which groups Mike and I were in 😜

2 thoughts on “Familiarities And Familia”