Here I was thinking I’d told all there was to tell about our own homes Reno’s but somehow I failed to mention that our basement got (almost completely) redone?? 🙈

Well, it did and it’s about time you knew 😏

If I wrote about the entire basement in one post, it would get lengthy so I‘m going to break it down room by room.

Beginning with the laundry room.

After tossing around multiple layout plans, we decided on our laundry area,
going beneath the stairs to make use of that angled ceiling space.

The leftover space under the staircase was used to make a cat room 🙈 Now, it’s not some snobbish, cat lady ‘my cats have a room of their own’ space, it’s a place to have their litter and lock them away at night 😜
It could also serve as a storage space 😉

Back to the room used for the rectification of soiled items.

For some reason, I don’t have any mid-way pictures of the process, just very unfinished, finished in slight disarray and finished finished. 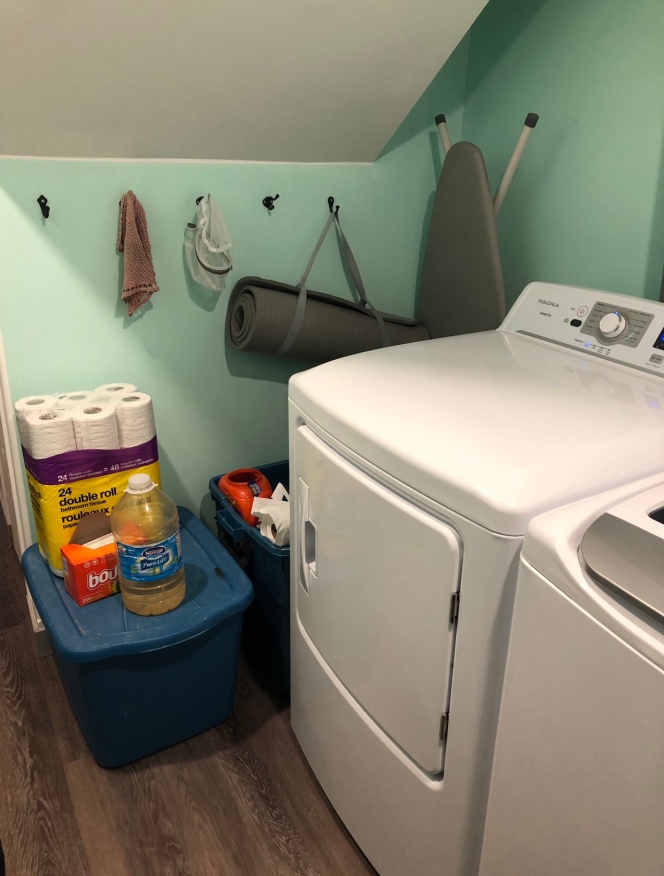 We purchased our new washing machine and dryer from Best Buy and have been happy with them thus far.

Since our electrical panel is in there, we needed a way to keep it accessible but cover it from the eyes and after much deliberation, came up with hanging a canvas over it 🤪
I thought about painting a piece of art on the canvas but for now, I think leaving it the same as the wall color is the best way to NOT draw more attention. 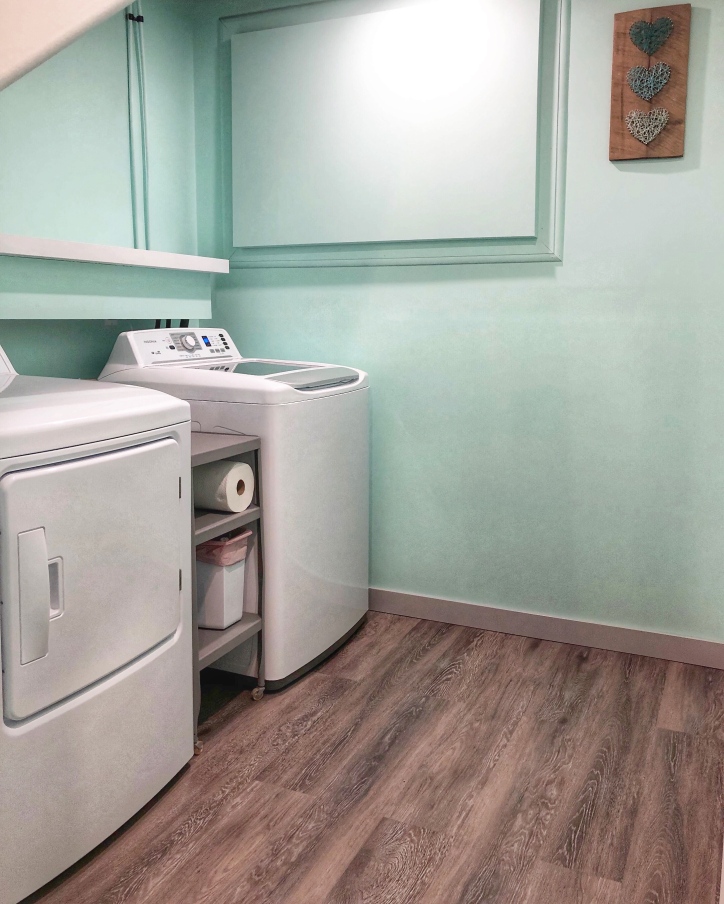 The flooring is the same throughout the main areas of the basement and was actually found on kijiji and is a super close match to our upstairs flooring.

I spray painted random hooks we’d had laying around and had those installed for whatever uses they may come in handy for.

For months (literally) I tried to think of what I could get to put between the machines for shelving/usefulness etc.
One day as I was in our garage I seen this trolly thing my mom has given me and the lightbulb was finally turned on as to how it could be used!

A simply laundry hamper was purchased.
The pipes from the dryer and washer were painted the same as the wall color and an Ikea shelf cut and modified to help distract the eye from all the knobs and whatnot bellow.

Also, just by chance, the drying wrack folds and slides in beside the washing machine, perfectly 😉👌🏻

So, now I can air out our dirty laundry in a pleasing place 😉

2 thoughts on “Airing Out Our Dirty Laundry”