Well, the decision was finally made to take a little ‘pre babester trip’.
We talked about doing some sort of trip off and on, back and forth for awhile but I couldn’t make up my mind…

On one hand it sounded appealing and like something we should indeed do while we could still enjoy the freedom of not having a small person to tend to and on the other hand it sounded like a very, very uncomfortable drive and a frivolous use of funds when the list of needed baby items isn’t checked off yet 🤪

What really did it was when friends/family from BC told Mike that they were going to be in Jasper area during an upcoming weekend.
Due to the Covid nonsense, our June guests hadn’t been able to come out and any other travel plans were not sitting high on the predictability scale, so Mike was feeling the need for socializing pretty strongly, so it worked to make the trip dual purpose 😜

We decided to leave Thursday afternoon after a morning of doctor appointments.
One ultrasound and check up for me and the babe and one check up for Mikes knee which had been swollen and inflamed for over a week, due to too much kneeling at work 😬

The ultrasound tech said the baby was looking like he weighed around 4lbs 10oz annnnd then asked who in the family had the big head because his was big.

Great, thank you, JUST what a pregnant lady wants to hear, that her ‘not to be born for weeks yet’ child, already has a big noggin 🤪👍🏻
All else was fine though, so we continued on, trying to dismiss that bit of information 😉

Mikes appointment was supposed to be routine but turned into them draining off some fluid to send to the lab.
As he sat getting clammy hands and taught limbs, I tried to reassure him that it was more than likely just gonna be your average size needle and not to worry.
It WAS NOT your average sized needle and I don’t know if I’ll be able to handle this whole ‘birth a baby thing’ 😂🙈
I knew I did NOT want to look but even while turned away, the doctors instrument sounds and then Mikes intake of breathing while the doctor took his sweet time moving the large needle around in his knee, was enough to make me want to be somewhere else.
I know to anyone in the medical field that will sound utterly pathetic but it’s the truth 🙈

Once we were finally done those tasks, the babymoon could officially commence!

Mike wanted to take me to eat at ‘The Lark’ in Shell Lake.
A restaurant he and his fellow construction comrades had ate at during a stint working in that area and they all talked about its delicious menu options 😉

A large patty, really tasty sauce and that sloppy aspect that generally come with when it’s a good, flavourful, juicy burger 🤓👍🏻

From that area it was only a 4.5 hr drive to Edmonton, where we’d be making our first stop.

It was a pretty uneventful drive.
The canola fields were in full bloom, so they periodically brightened up the landscape with vibrant yellows and greens.

We listened the first ‘Father Gilbert’ mystery produced by Focus On The Family to pass some time, didn’t snack to too much at all and generally just passed the time in contemplative silence and watchfulness of the passing surroundings 😉

We did broach the subject of naming our soon to be offspring… not sure we got very far, though it was my hope that by the end of the trip we’d have come to an agreed consensus 😏
I thought we had it narrowed down to three possible names and would make our choice from those, when Mike begin chucking out all these ‘other’ names, in turn aggravating me because I’ve read so many stupid lists of baby names and he just repeats the most common ones around cause they are what he’s comfortable with and I feel like it would be easier to leave the child UNAMED forever at this point 🤪

Moving on, we arrived at our place of rest and because we’d gotten an email earlier in the day, we knew that it was actually a bedroom in someone’s house, apposed to it being the actual ‘house’ as we had at first thought.

It felt a bit weird, going in through someone’s place of living, especially since they weren’t home to give a little ‘hello and what’s what’  but we had booked it and couldn’t change much at that point and the room itself seemed nice enough 🤪 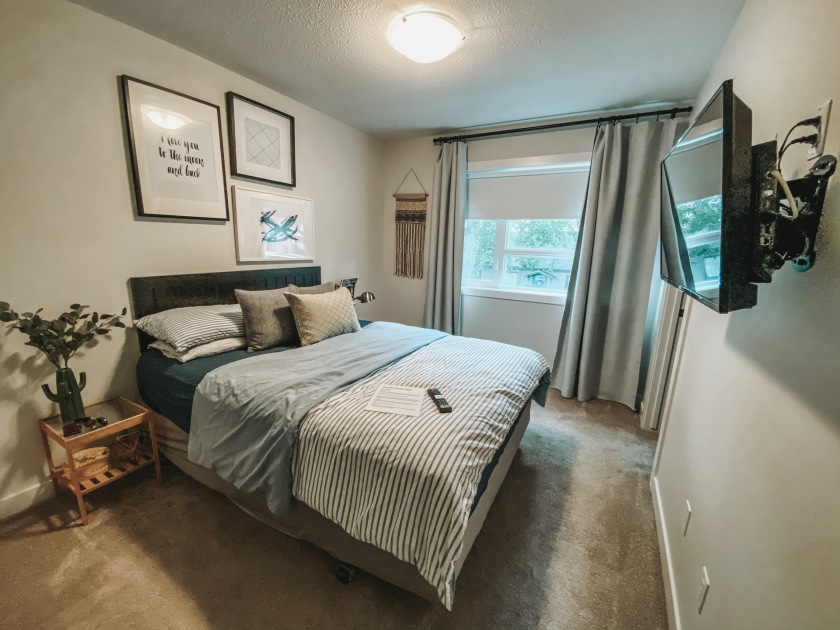 So we dropped our bags and headed back out to find some food.

Maybe we weren’t in the best area of Edmonton but neither of us were very impressed with the cleanliness of the city nor the genres of folk that were out and about 😬
As we walked to the restaurant I asked Mike if he felt bushed and like we didn’t belong in the city and his immediate response was ‘yes!’ 🤪🙈
We went to ‘Meat’ and decided on sharing the brisket sandwich with pickles, a horseradish mayo and served with their garlic fries.
It was super tasty.
I’m not a big fry lover, homemade or not but these homemade style fries, not too thick and not too thin, perfectly crisp on the outside and covered in a light, almost gravy like garlic coating, were delicious 🙌🏻 The sandwich was also really good, the dill pickle and mayo adding that needed zing to the butter spread bread and brisket.

Back at the ‘room’ it was pretty much straight to bed… having been up since 5:30, gone on an early morning walk with the sister and mumsie, made breakfast, packed up, done town, doctors and 5 some hours in the truck, I was more than ready for sleep and the idea of being creeped out in someone else’s house dissipated as quickly as dream land came 😉