The campers hadn’t planned on having an early morning so neither did we, sitting down at our chosen breakfast place around 10:00 am.
That wasn’t really by choice though, as we had entered and left three other spots before finally settling on our perch at ‘Sunhouse Cafe’… we learnt from the previous evening to be happy with the menu pre settling 😉 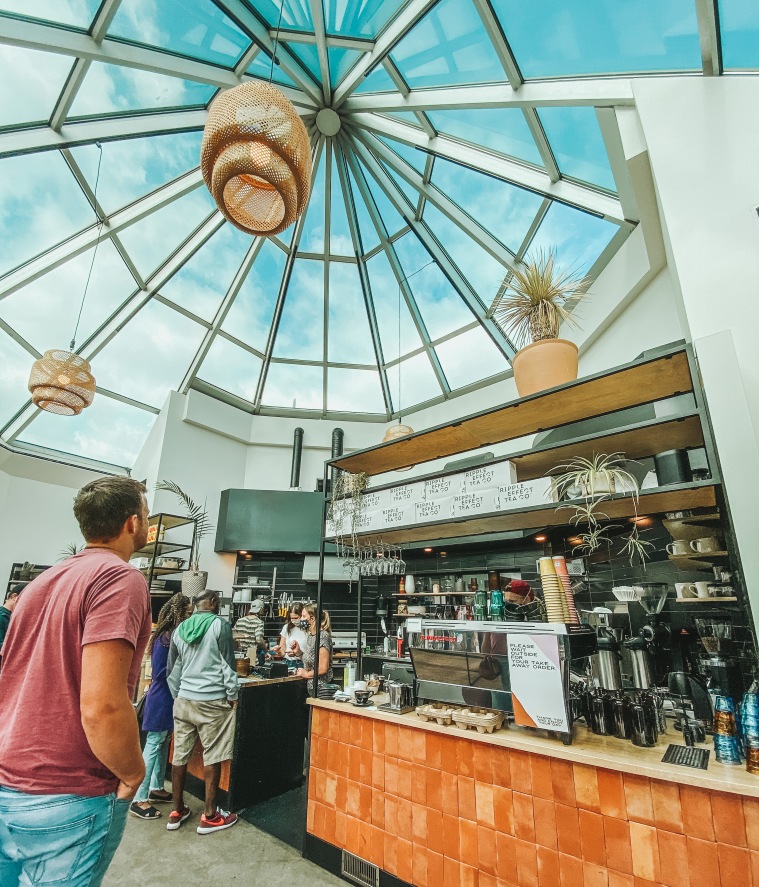 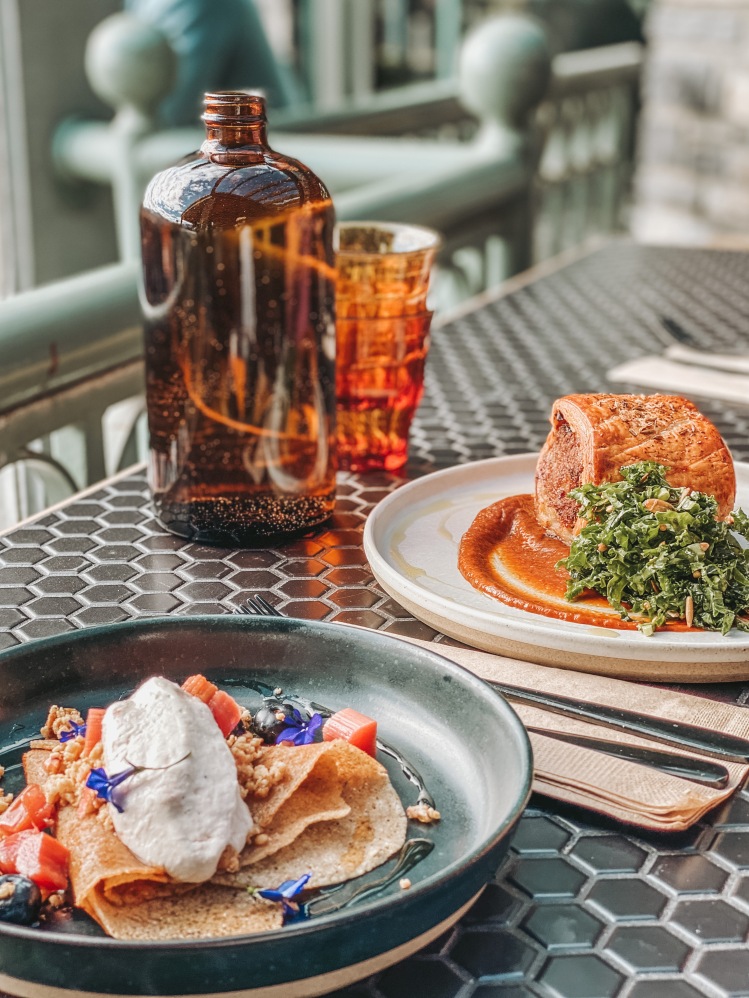 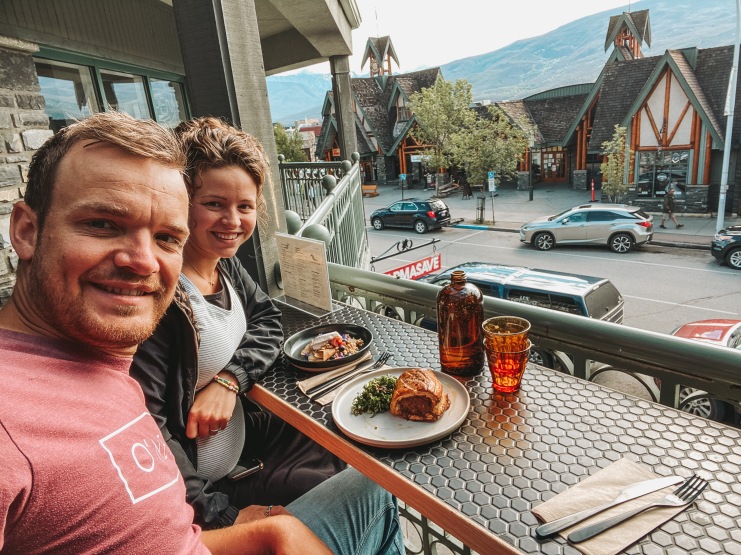 A grocery store was found next and some provisions for the day ahead, purchased.
More campfire sitting, campground walking and visiting ensued for the rest of the morning/early afternoon.

Mike warmed us up some thick slices of buttered sugar bread over the fire, which he’d purchased at ‘Dutch Delicious’ in Edmonton. 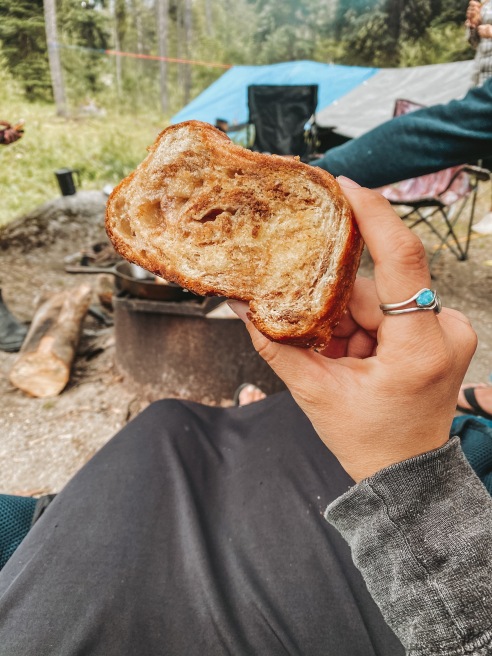 Sugar bread being a sweet loaf we purchased often when living in Holland.

A mini walk was taken along the lakes edge, after which I retreated to the truck to stretch out on the back seat. 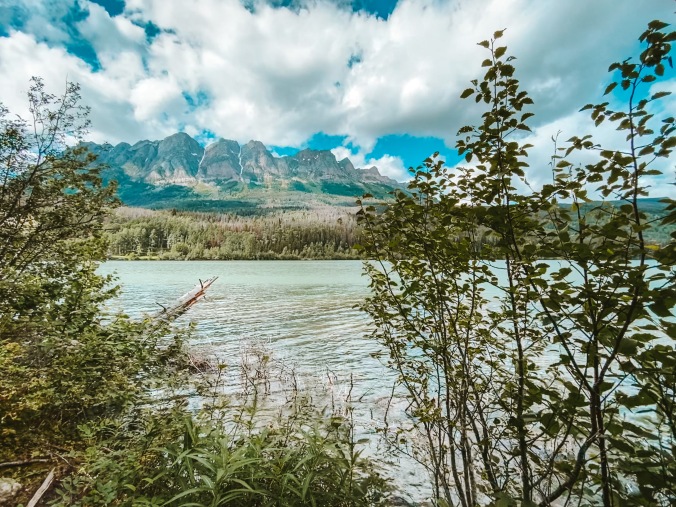 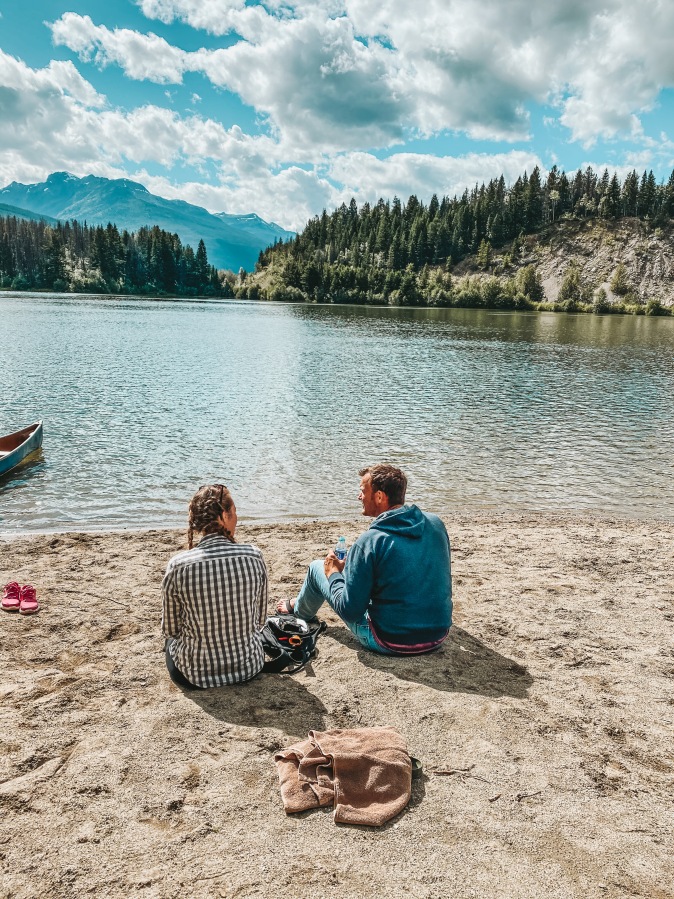 An ice pack on my ribs and tennis ball beneath my back #comfortable 🤪 It turned into a nap… not all together unexpectedly, nor unfortunately 😉

When I awoke, it was nearly time for supper, which was created by one of the girls on the camping trip and also a couple steaks grilled by Mike and another fellow.

It was all very enjoyed ☺️👌🏻

After dinner, some of us headed off to go on a simple hike near the campground.
We drove a little too far and had to turn around but that was only a good thing because two bull elk were spotted munching alongside the highway. 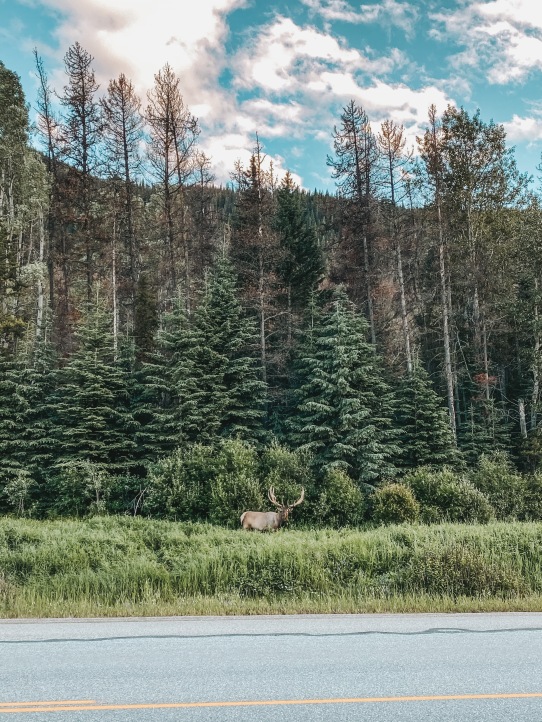 We found the ‘Yellowhead Mountain Trail’ and began the ‘supposedly’ 2 km trek.
Which was nearly immediately more of an uphill incline than not 😬 I don’t know about anyone else but it didn’t really inspire hope for what awaited us and my heavy breathing had me deeply questioning my abilities 🤪 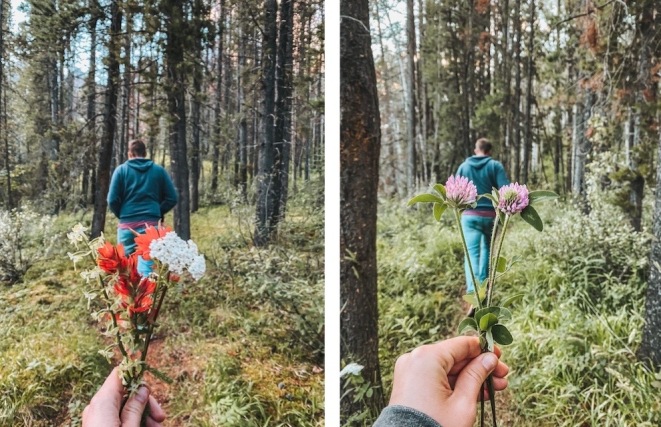 Hubster picked me some little bush bouquets… they gently got discarded along side the path, as I needed my hands to continue the journey 😉 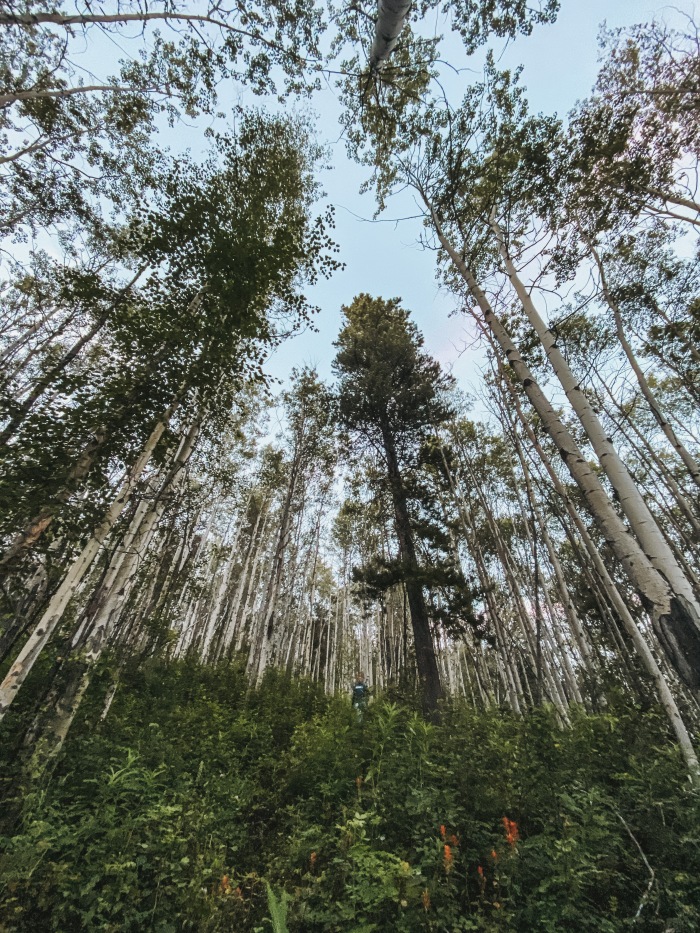 How hard could 2 km really be though? Also, spot the Mike in the above photo. 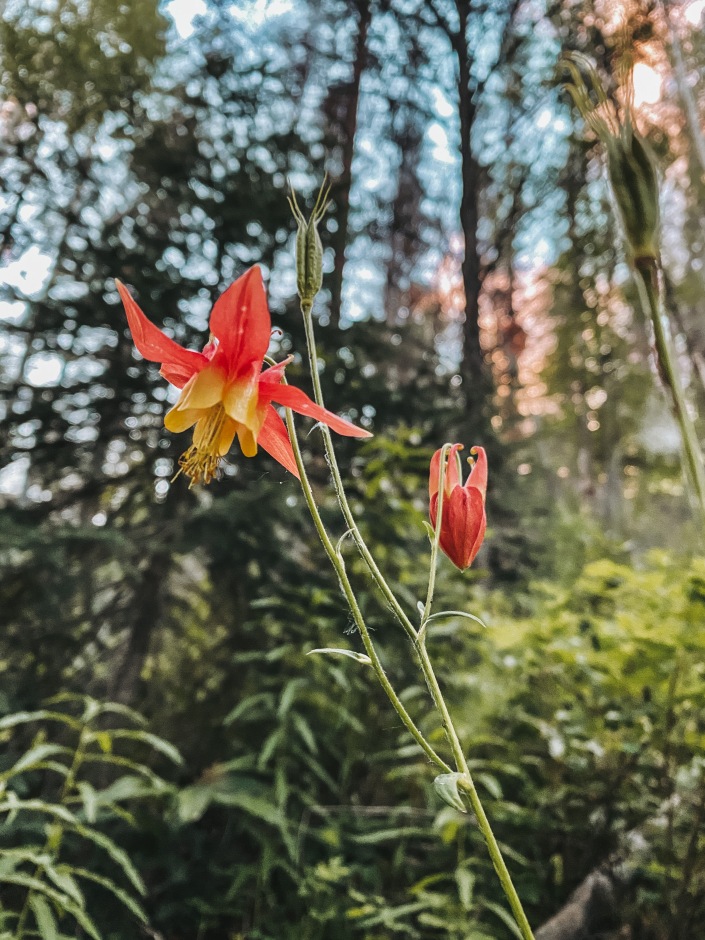 Turns out, it could be decently tiring 😂

Onward and upward we went, slowly spreading out a little more, each taking their own pace and finding traction along the mud slick inclines, hopping a couple streams and trying to observe the ‘path’ through 4.5 ft foliage.
The three of us who were a little ways ahead, were starting to question how much farther we should go, when the light at the end of the hike began to shine through some thinning trees 🤪

We called to the others that they were almost there so don’t turn back and then we proceeded to take some rapid fire photos, look at what we came to see and turn around to begin retreating back down, due to the setting sun. 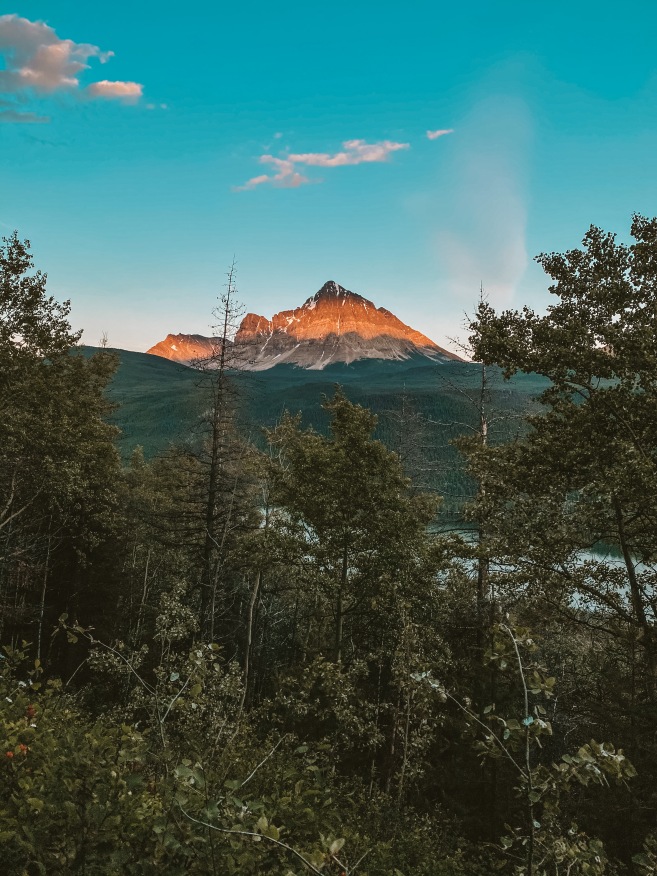 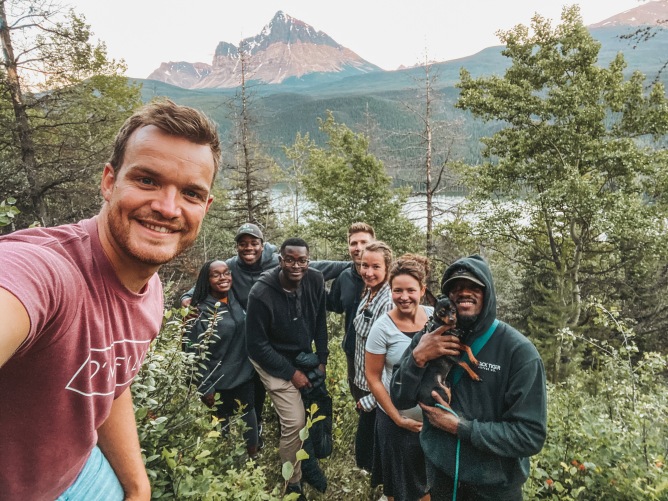 As we hadn’t expected the sun to have time to set, prier to starting said hike 😏 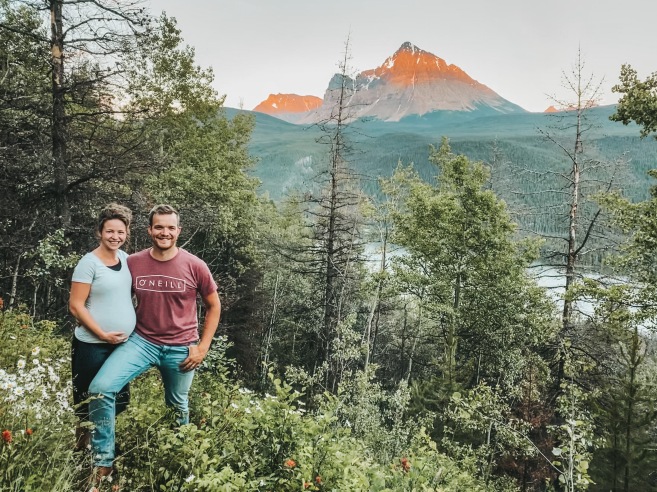 One minor slip caused some leg blemishes for me and Mike didn’t love the downward decline with his knee hinting about its ‘less than prime condition’.
Unfortunately one of our hiking members had a rough go of it coming down, due to some pre existing knee problems but thankfully made it and was quickly given Tylenol, water and a chair and hot water bottle near the fireside back at camp.

All in all, it was a bit of an adventure and really, who wants to talk about the simple little, totally doable walk that they took anyways? 😉

I attempted to look up the hike details later and from what I could see, it truly was only 1.22 km there and back but this flatlander obviously has no experience with mountain side explorations 😛 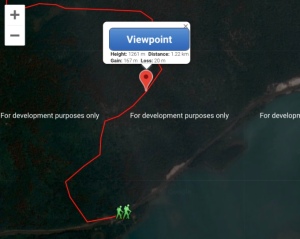 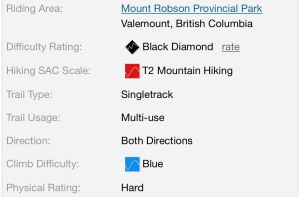 Black diamond being ‘very difficult’ *…though truthfully that could be referring to the ENTIRE hike and not just the part up to the viewpoint, where we called it a day 😉

We again spent the last evening together by the fireside (luckily with a little less smoke inhalation) and we didn’t officially part ways until around midnight, bidding the friends goodbye until next time.
Getting us back to our hostel and in bed by 1:00 ish.

Bed hasn’t felt so good to fall into, freshly showered and comfortably clad, in sometime 🙌🏻