We were ready and out the door by 8 ‘clock so we could go to what I think was literally the only open restaurant aside from the hotels.

The funky breakfast mural painted outside would raise ones hopes for what the interior may look like, but inside it was your classic old style home family diner. Fine, just a bit tired feeling.
It was pretty bustling in there and we waited 40 minutes for our breakfast, Lake ever nearing his patience maximum but pulling it together once the food made its way out … already so much like his parents 🤪😉 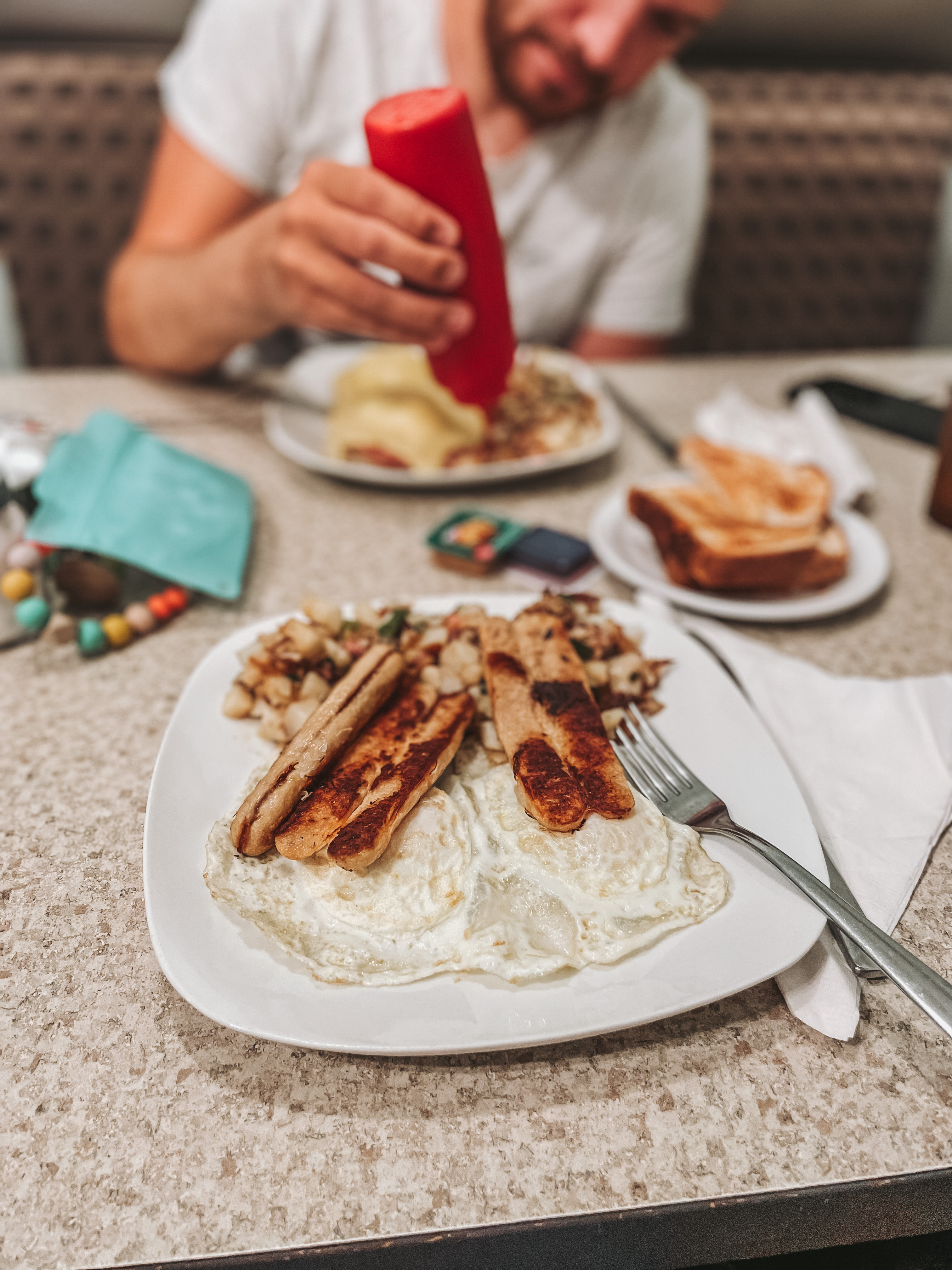 The hash browns though greasy, were really tasty 👌🏻 Having a nice flavour, with ham & fried onions mixed throughout. The rest was pretty typical. Eggs, white toast, breakfast sausage. Do not get the coffee if you go there 🙈
Prices are reasonable for what you get, and though the atmosphere and wait weren’t the nicest, it wasn’t a bad experience either 🙂

I’ll mention it here because we’re on the subject and I missed it in the retelling of the previous day…
We ate at Evolve, though not having been starving, but needing something before dinner.
Have you heard, ‘You eat first with your eyes, then your nose and last with your mouth’ ?
I believe that is true to a large degree and in front of my eyes was served what Mike described as, ‘food I’d have just quickly tossed on a plate at home, I wouldn’t even serve it to you or a friend when it looked like this’ 🙈
Now that’s not to say it was disgusting looking or even poorly tasting, it just really lacked in presentation and honestly, that’s a part of what I’m paying for when I’m not having to eat my own food 🤪

Back to the day at hand.

(A picture WITHOUT Lake?! Imagine that😅)

We strolled the streets a little while after breakfast, talking of the game plan for the day as well as while waiting for Lake’s eyes to grow heavy.
So, by 9:45 we were all back in bed for a mid morning nap 😅🙈 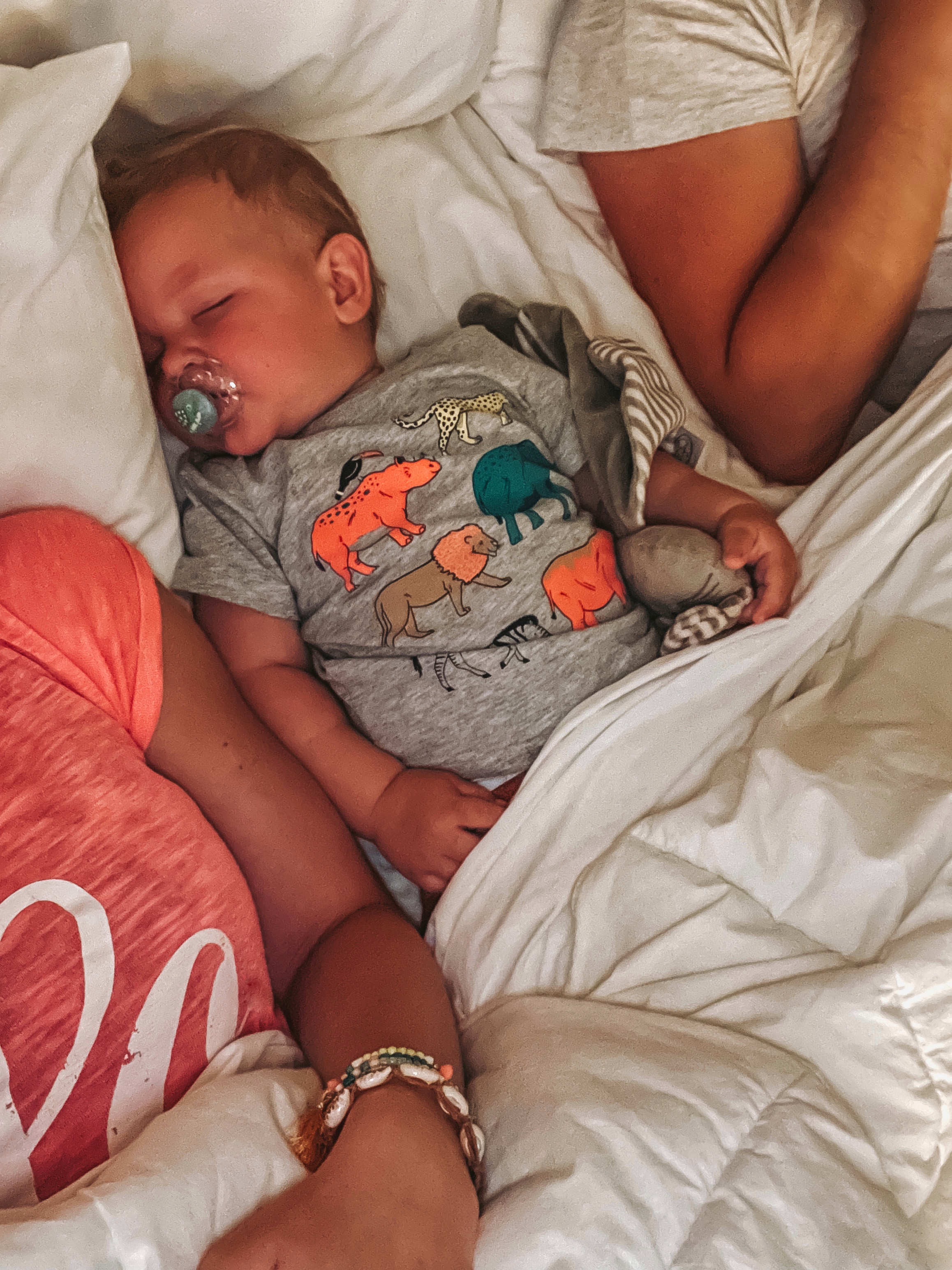 We couldn’t get late check out so we thought it would be a good idea to let Lake splash around in the bathtub once more before assembling ourselves to leave.
I filled it a little, laid a towel down from some traction and set him in.
Being a jacuzzi tub, it was deep and hard to reach into, so when he decided to immediately flip over instead of stay seated, I couldn’t react quick enough to stop his mouth from making contact with a ridge in the tub 😬😫
There were many tears from Lake, many feelings of remorse from me and his first blood loss 🙈
So much for fun in the tub 🤪
Once he calmed down, Mike decided to just take him down to the pool.

I stayed room side and packed up our things.

Let us take a moment to discuss the room.
For being the renowned hotel it is and for paying the price we did (sans continental breakfast) it was a bit disappointing.

Not a single noteworthy touch aside from the bathroom tile and it honestly felt pretty dated and all together a bit rundown after the fairly impressive statement the lobby makes. 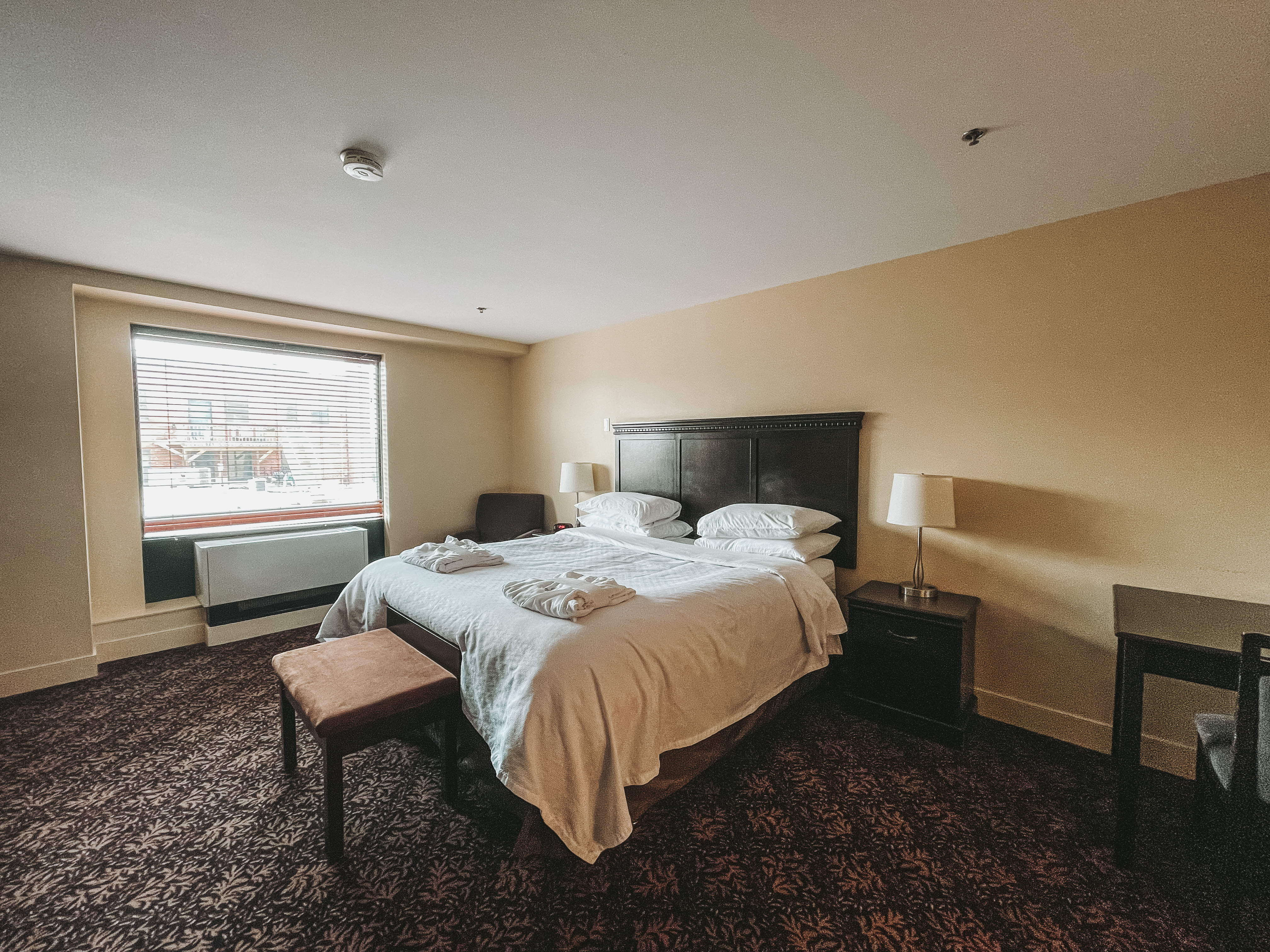 It’s nice to have the spa right there if you’re planning on making use of it and the pool is nice, baby wise even, as there’s no real ‘play’ allowed. So it isn’t a ruckus echoing space, full of splashing all while one’s trying to enjoy the water, which I find appealing.

The breakfast we ordered from the restaurant there was good and though we aren’t generally fans of continental breakfasts, after this trip with Lake I think it would be a benefit. Having one available to grab a muffin or something before simply going out for a large lunch once things were open.

All in all the boys made good use of the pool and I was able to use the spa which probably wouldn’t have happened otherwise, as I had to go late in the evening while Mike stayed with Lake in the room. Even though the room was dated, it’s not as if it was grungy. Would we stay there again? Probably not, but it wasn’t due to poor customer service or dirtiness ☺️

I walked with Lake to Bella Chic while Mike checked out of the hotel. It was a pleasant little store with some unique jewellery and different items, did I purchase anything for myself? No. But that’s not uncommon nor a reflection of the store 😜

I did however purchase a bracelet for Mike for Father’s Day, as the one he’s worn for over a year, got cut off due to his wrist episode 🥴

Mike had done a little looking before leaving the hotel as to what route to take and he decided we should stop by the Douglas Provincial Park.

It was a good decision ☺️👍🏻

A $10 admission later, we were in the park and eating ice cream in a boat… a boat on land, imbedded in the earth 🤪

A sign said it was built in . . . well, I don’t remember the year, nor do I have a photo of the sign so I guess you’ll never know how old the land boat was, but safe to say it probably wasn’t super young if they had a sign on it 🤓

Ice cream eaten, we wandered down to the water. 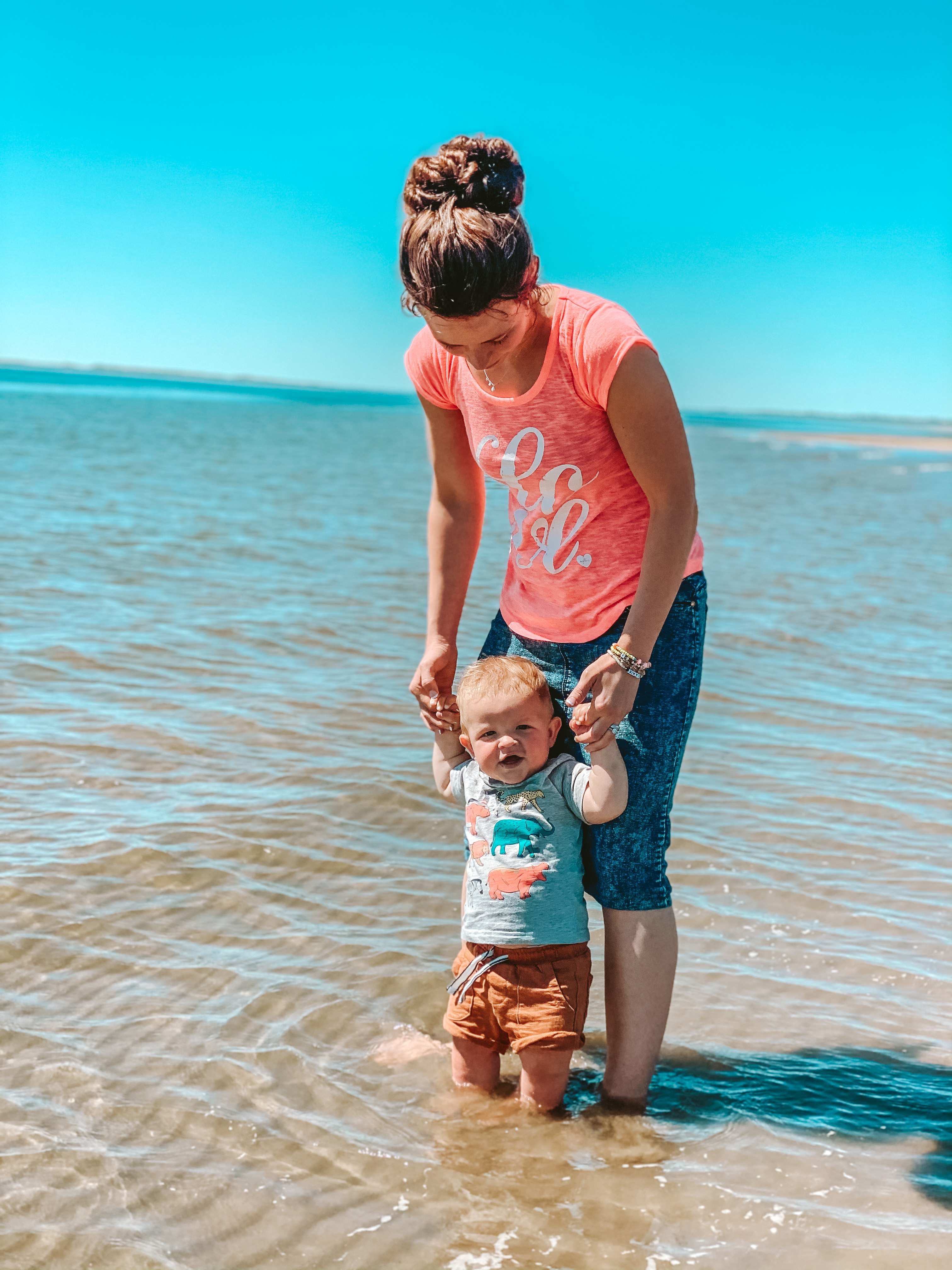 A huge expanse of beach stretched out before us and we found ourselves wishing it wasn’t 2.5 hours away from home.

Though not having gone deeper than our ankles, we don’t know if it was weedy or not, so maybe if we pretend it was laden with slimy, algae coated seaweed, we won’t be disappointed about its distance from us? 😜

Since little, Lake has hated changing tables/doctor weigh scales etc. so changing him in public restrooms is literally impossible singlehanded.

So with Mike as a safety guard, a tailgate diaper change and short refresh was taken care of before driving just across the highway to see about doing a ‘little’ walk to see some sand dunes.

It was +30’s out and we only had Lake’s little town stroller, but with a slather of sunscreen applied on our small persons chubby thighs and cheeks, water bottle and bag of chips tossed in the stroller, off we went to attempt a little loop.

We ditched the stroller after some time, it not having the oomph to power through what had become a pretty sandy path.
Then it was I who didn’t have the oomph 🤪

I carried Lake a ways, but as we journeyed on, we realized the landscape on the short route wasn’t going to differ much and we were not equipped or prepared to do the 6 km loop to the ACTUAL sand dunes… so we turned around 🙈

Claiming having spotted some Saskatchewan cacti as our achievement 😜👍🏻🌵

Mike searched out a restaurant not too far away and we ate what was like a chicken fried steak and a chicken burger at a very posh golf resort club, overlooking a winding inlet of water filled with sail boats of the elite 🤪

Know that feeling when you feel out of place even though you know you shouldn’t?
Well, we felt it 🙈

Behind us, in their flowing summer dresses, tan shorts and their young daughter in a ruffled denim dress, little seashell choker and sun hat a’top her curls, a family sat to eat. Telling the children not to go after the gophers as they ‘weren’t safe!’. Talking of their morning runs and the upcoming get together and who was bringing what, etc.
It doesn’t sound THAT outrageous… but you could just FEEL the implied class difference 🤪🙈

No high chair? No problem. Always has to have his feet/toes on something 🤪

The food was decently tasty though, and once we filled ourselves, we quickly left. Driving through Elbow, a tiny, somewhat drab little town aside from the massive summer homes that were built overlooking the water.

Road construction had us sitting for sometime, but from there on out, the drive home truly ensued.
Around an hour away from home is where Lake finally had enough and began to fuss and the fussing turned into tears and the tears into screams 🥴
It lasted 40 minutes in the vehicle with pretty robust unhappiness and then another 30 at home to deescalate and realize the road trip was indeed, over 😅

For how much sitting he did in the truck and stroller, I think he did good 👍🏻

We didn’t find our room invoking of design features we want to apply to our home, but it met our needs.

The views, though pretty at times certainly, didn’t strongly stand out among those which we’ve been blessed to be able to explore prior.

It wasn’t the greatest trip we’ve taken, nor would we probably do it again anytime soon.

Yet, despite all of that, it was such a pleasant getaway! ☺️😂

It may sound slightly funny, but I think with Lake having done so well, having beautiful weather and we having no little couple squabbles (the sort that can so easily occur over silly things 🙈😜) it all just combined into being a super pleasant little getaway that we really enjoyed ☺️
We didn’t have any extraordinary expectations going into it and maybe that helped too but I personally find it very hard to control my preconceived ideas so it happened by luck this time🤪

Thanks for tagging along as back seat passengers 🤓