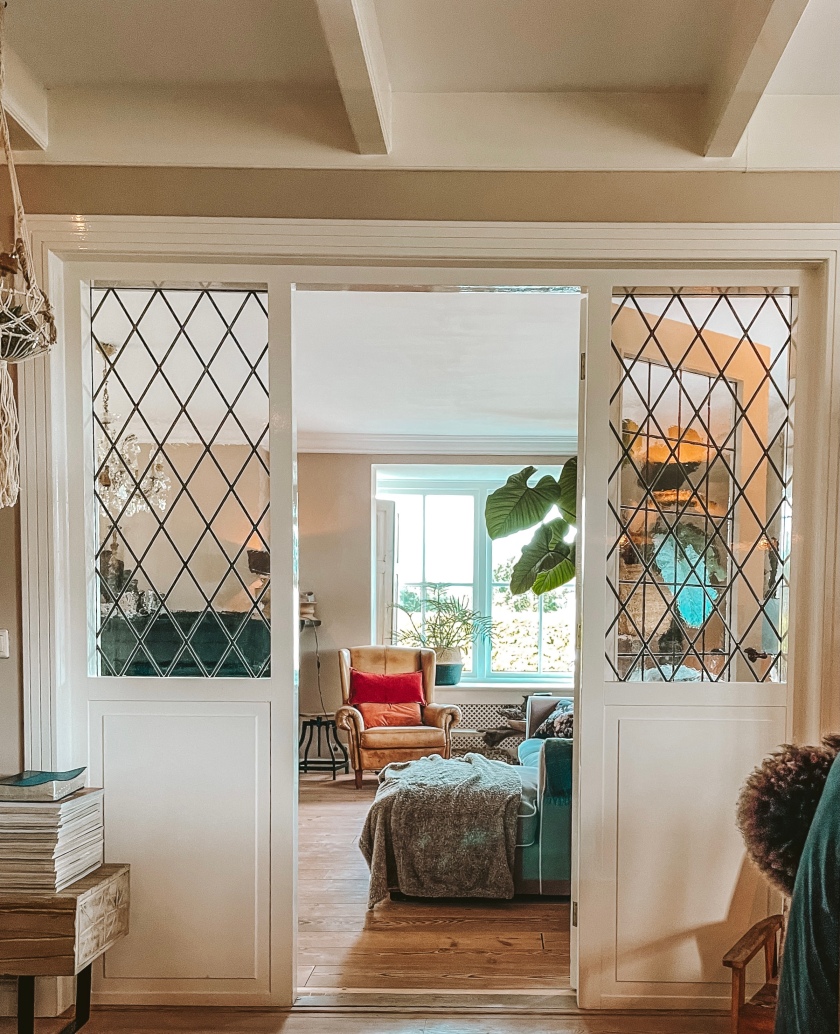 Here, it’s somewhat described as ‘landelijke stijl’, roughly translated to ‘country style’. If I could replicate it to a degree with a little bit of my color love thrown in, I think I’d be pretty pleased with the result 🤪 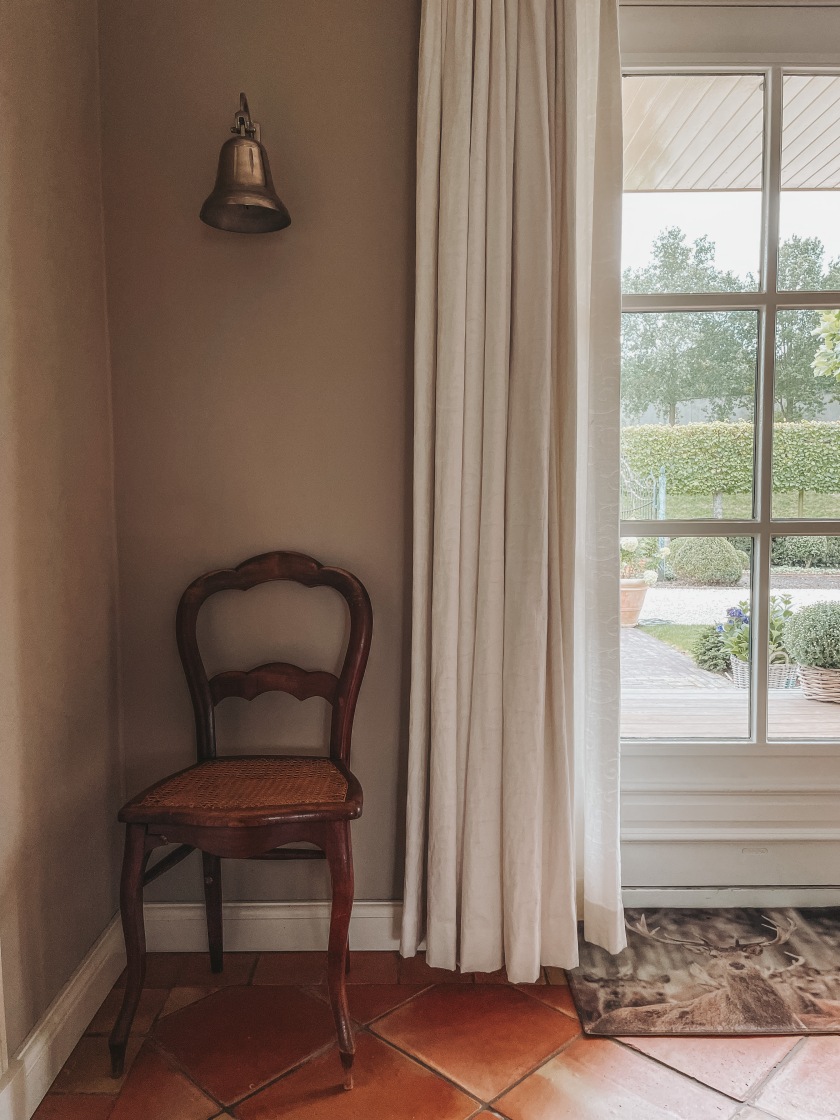 It’s like, a classy boho/vintage with old charm thrown in, a blending of old and new, and so many textures… 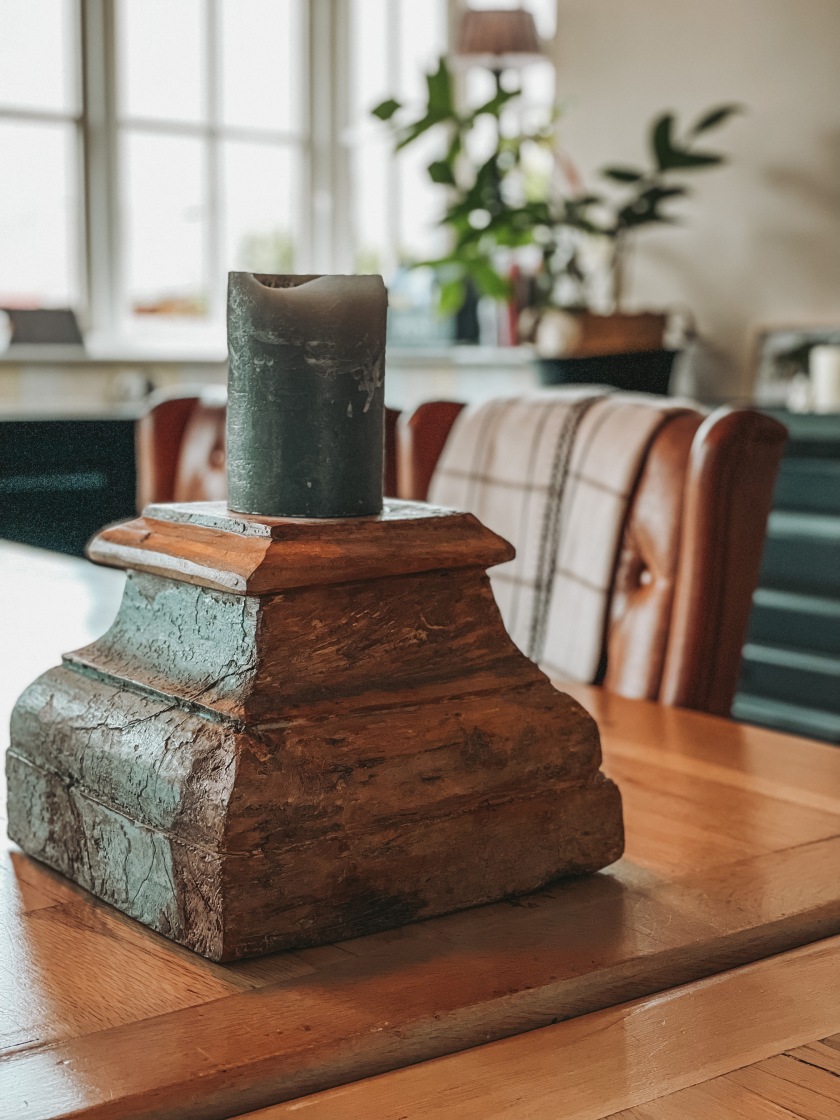 Little details all coming together to make for a home that’s not only comfortable, but also interesting.

Our hosts were also very nice, which I think in no small part lent to the homey atmosphere 😉👌🏻

Permission was asked, and granted for the sharing of these images 😉

Many of you may know them via their businesses, 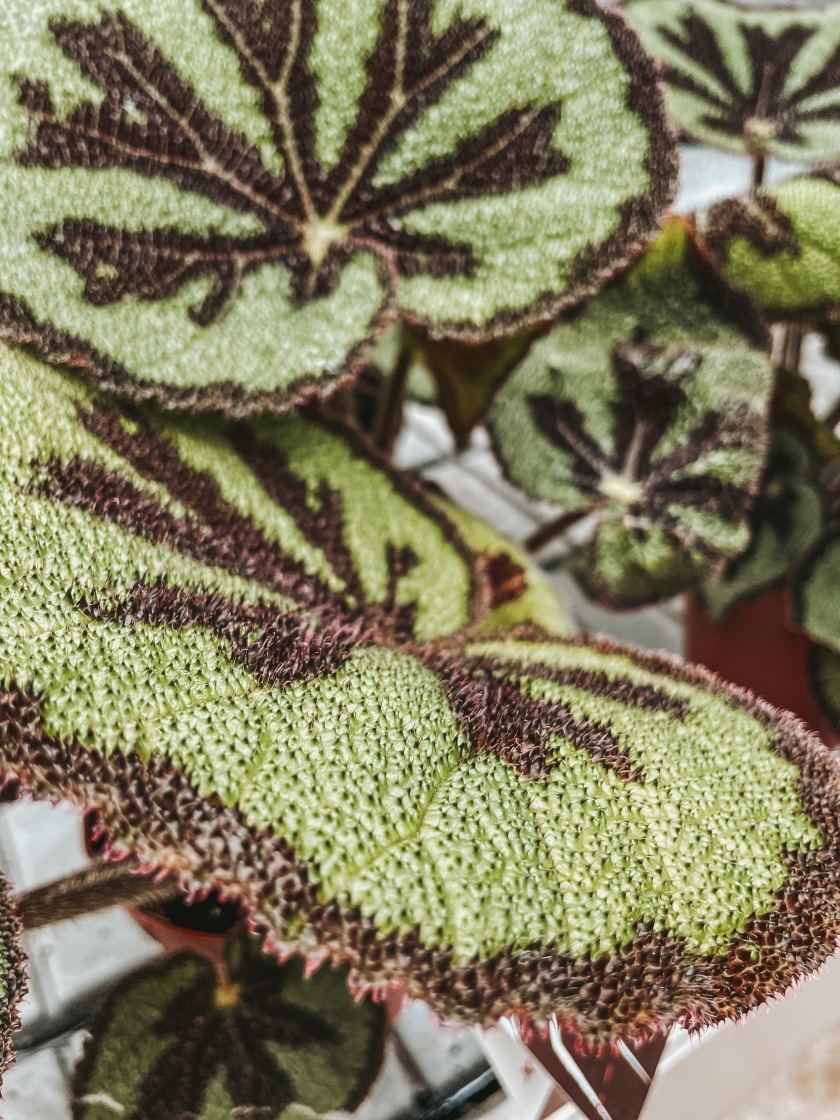 We’ve even seen their products in Wilson’s Lifestyle Centre in Saskatoon!
Which is actually a very Dutch like store, many products even say outright ‘from the Netherlands’.

But, back to the story at hand…

As they have their own business, Monday morning came with work, which Mike was able to tag along for.
I happily stayed back and enjoyed some downtime, sitting and writing, while Lake slept 👌🏻
By the time they returned it was near lunchtime and all the family returned to the house for it. Which was nice because then we got in more time to hang out even though it was a work day.
Afterwords, we packed up and headed out to visit the cousins at their perspective work places as well as the  store front.

Exploring those areas, we learned about the costs and time it takes to start new plants, how they securely pack the plants for shipping out and so on.

It’s interesting stuff, but as a non plant enthusiast/life giver, it all seems stressful to me in the fact that you can just let your profit literally die 😂

Supper was being made for us at some friends whom we previously always visited when we went to South Africa!
They moved back to her home, her being from Holland, so now we got to see them here and each of us had a new babe as well.
How things change 🤪
I had to walk outside with Lake  for a while to get him down for a nap, but after that, we had a nice dinner and visit together. Catching up, discussing houses, work, babes and all the highlighted areas adult life encompasses, before we headed away from the Groningen area, and back to Doesburg.

* I ask that you do your best to ignore any spelling mistakes, as on my iPad the set up is different, and I can’t find an easy way to do a spelling / grammar check. Thank you for your understanding

Entering the room, Jessica sits down and opens the laptop and blows dust off of the keyboard, waving her hand in the air to clear it and coughs gently.

Well, it has been a long while since I’ve posted anything, but now it’s time for a recounting of our trip to Moose Jaw, which coincided with my birthday. Thus becoming, ‘my birthday getaway’ of sorts – unexpected, but accepted 🤓

We’d thrown about the idea of exploring Moose Jaw many times but usually with life and work and having other places to go, it got tossed to the back of the pile.
Metaphorically speaking of course, as one cannot ‘toss’ a thought of a destination upon a pile of something 😏

Anyways, with Mike having broken his wrist it meant he had a lot of spare time on his ‘hand’ 🤪, plus the restrictions still being what they are, the idea of Moose Jaw resurfaced once again.

We weather watched and finally decided on leaving Friday, at whatever time ended up being Lake’s first nap of the day 😉

We awoke to the expected rain, but that didn’t ‘dampen’ our spirits (full of these puns today… haven’t written in so long I can’t stop them from coming out, my apologies 🤪🙈).

I’d attempted to pack up most of our things the day before, but there’s always those last minute things to grab, cooler bags to fill and tasks to complete and seeing as this was our first real trip with Lake, the supply list felt a bit mind boggling (for me 😜).

Mike asked if we really had so much more stuff than usual JUST because of Lake 😜
Yes, dear… that is indeed why 😅

A quick stop had to be made at the sisters house, where the nieces waited for me with their gifts, instructing me to take the cards with to read on the drive 😉😋
They were not so lengthy as I had expected after that specific instruction but enjoyed nonetheless 😂

We officially headed off around 11:00, Lake fast asleep and head bound in attempts at staving off the awfully uncomfortable neck bend babes incur so often in their car seats 🙈

The start of the drive flew by for me… as I was being showered with birthday messages and wishes and was happily posting the mornings details for others to partake in.
It felt like we were headed off on some huge adventure in some way… I guess that’s what ‘the c o v i d ‘ will do to a person 😜

We passed along a wealthier area of Saskatoon’s outskirts, remarking on the homes and what we liked or did not. Always looking for design ideas to document 😉

2 ish hours in, we made it to Kinder Surprises Antiques, a place I’d always been curious to go explore should the opportunity present itself.
Lake had just awoken, so the timing was impeccable 😉

Mike remarked that it felt almost more like a museum tour of sorts rather than just a place to shop, which is an accurate feel.
Multiple buildings being filled with items of all sorts, being the largest rural antique shop in Saskatchewan.

What we thought to be an old school house, boasted of some beautiful old windows.

The boys got to stretch their legs a little, while I took slightly more time then they to rest my eyes upon all the objects available for perusal 😉

The remainder of the drive went by without anything too documentation worthy occurring, which is not a bad thing, when one is road tripping with a wee little person 🤪

The Temple Gardens Hotel & Spa was checked into at 3:00 and we went up to deposit our bags and let Lake rip around in the room.

30 minutes later we were seated at The Mad Greek for an early dinner.
(Mike had eaten there once as he had quickly passed through the area post car buying, shocker I know 🤪)

We quickly decided upon the Greek platter and delved into it once it came.
Pork souvlaki with their garlic sauce, gyros, sausage, filo wrapped feta and spinach bites, pita bread and a baked eggplant topped with a cream sauce made up our meal and it was very very tasty 👌🏻
Lake happily ate everything as well but we found out as the trip progressed, that he does not like restaurant forks, preferring to be fed by hand or spoon specifically 🙄😜

As a gift from my mother-in-law, I had a massage booked for that evening. Because of that, we didn’t linger long at the restaurant and headed back to the hotel so the boys could test the mineral pool. 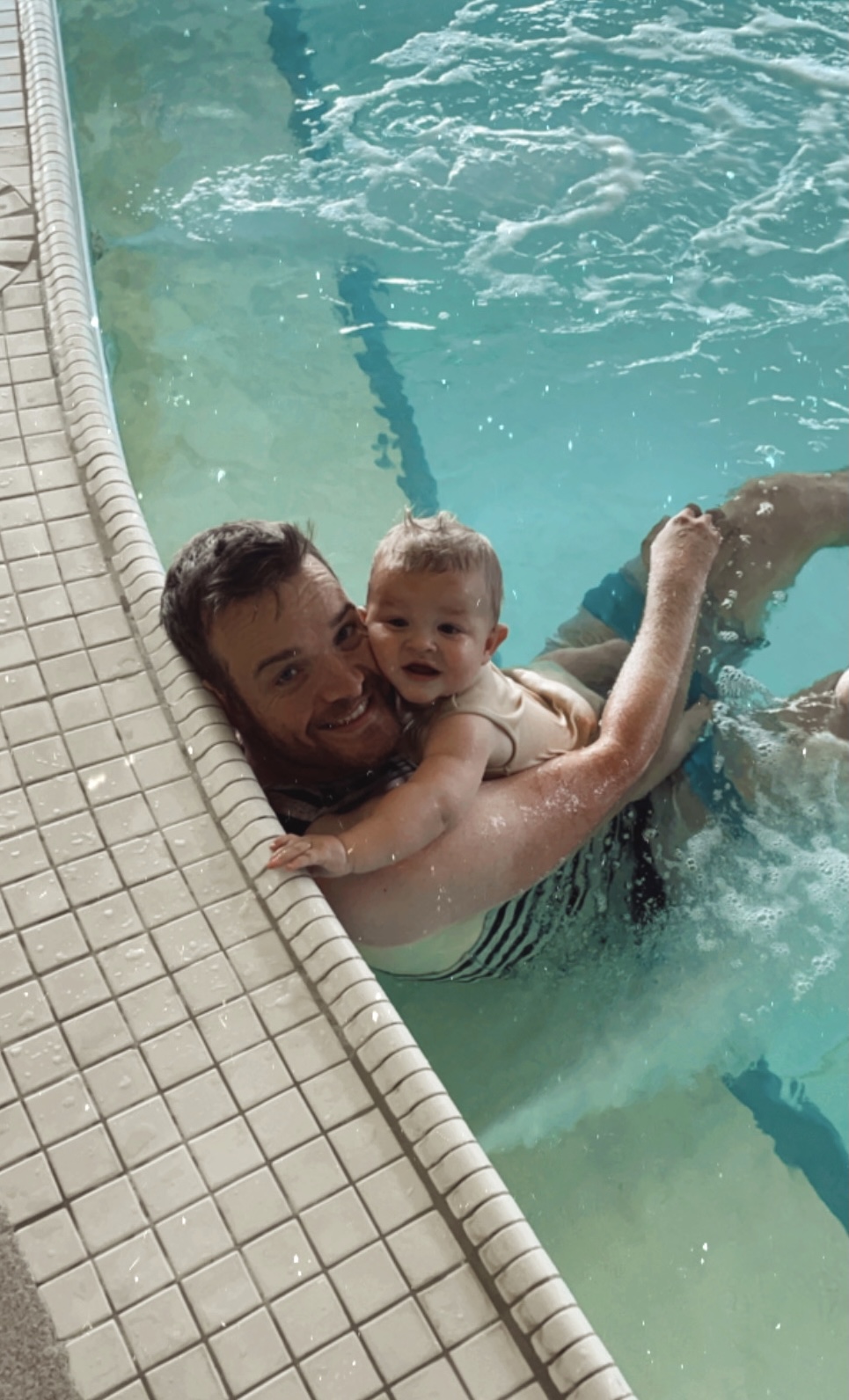 Needing to do so in time for me to get Lake into a fresh diaper, pjs and hopefully bedtime ready, before I left. As dressing Lake isn’t a task Mikes wrist was up for just yet.

I headed up to the spa at 6:00 and settled in for my pro sleep massage ☺️

It was done mainly with brushes dipped in hot oil, which I’d never had done before.
It was done very nicely and my esthetician was the perfect mix of friendly and conversational but, not so much that you couldn’t relax and really enjoy the treatment ☺️
I personally would have liked a little deeper of a massage but I’m not complaining 😉

I got back to our room around 7:30 and was met by a sleeping baby upon our bed and a husband who said the babe had been very unhappy and unwilling to sleep until a few moments before 🙈
I honestly didn’t feel too badly about it, as when do the dads really every have to deal with an unsettled baby, alone ? 🙈😜

He did end up waking up for an hour or so and I had to get him back to sleep while Mike went out in search of some snacks and my free birthday Starbucks… and some snacks for himself as ‘you didn’t pack any chocolate??’ 🤪

A peach green tea with coconut milk was shared as we relaxed before turning in for the night… I even took a part of a sleeping pill because I rarely sleep well in a hotel and I figured with Mike having more mobility back, he could handle a night waking for the first time in 6 or so weeks if need be, for the last of my birthday wishes 😉😋

And finally, some details about the mini couch makeover the sister and I undertook! 😁

We often send each other postings of goodies that are for sale in the local areas, ooing and awing and just as quickly saying ‘no’ and forgetting about them 🤪

This time, that was not the case.
The moon phase was supposedly full and affecting people and their decisions… not sure if I believe that’s a thing but we will use it as our excuse 😂

She sent me a picture of the two blushing beauties, saying how they looked to be in great condition for only $50 but she didn’t need them.
I replied that ‘yes, too bad I didn’t need them either’. END_OF_DOCUMENT_TOKEN_TO_BE_REPLACED

A ‘do it yourself’ that I supposedly didn’t really ‘do much to’ myself, according to Mike 🤪
But none the less, I wanted to take you through the process of my finally getting a desk for my craft room!

We found this table at the Mac house and I was immediately taken with it 😍
I love the unique legs and the fact that I can use the table as one larger square table or as two smaller ones.

I started off by sanding it down and washing them. END_OF_DOCUMENT_TOKEN_TO_BE_REPLACED

Breakfast was once again a macaroon and coffee.
A fare I could easily adjust to, daily 💁🏻‍♀️

We parted ways with two of the aunts that morning and our other aunt toured us around until we had to be at the airport later that afternoon.

We went to The Forks and sat down for lunch, beginning with some truffle oil and parmesan fries that came with a basil dip and a garlic aioli dip. 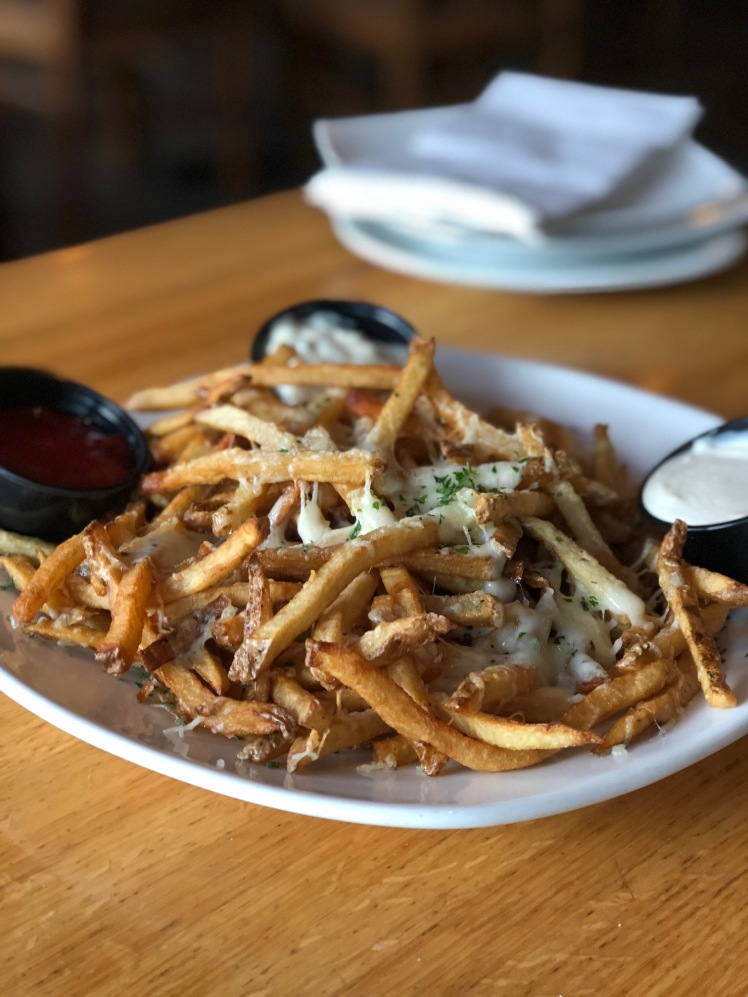 Mom and I shared a peach, orange and chicken stir fry dish and it was alright but we’d had much better throughout the trip 😉👌🏻

We wandered around the stores, and walked over to another building to do the same there.
Tired of shopping but also having too much time to just spend at the airport. END_OF_DOCUMENT_TOKEN_TO_BE_REPLACED

My breakfast? A birthday cake flavoured macaroon of course 💁🏻‍♀️💕🎂

We’d left our place and drove towards Steinbach for a few, further out stops on the ‘to do’ lists of my one aunt.
We had four days and five people’s wishes to fit in, so we tried our best to accommodate 😜😬

Firstly we stopped at Bothwell Cheese to see what sorts of delicious cow by products they’d churned up.
I got a peach flavoured sparkling water (a non cow product, obviously) for the road and a chilli pepper cheese for at home 🙂