The view from the surf lodge was taken in one last time that morning before we drove off, looking for breakfast in the town of Jeffrey’s Bay. 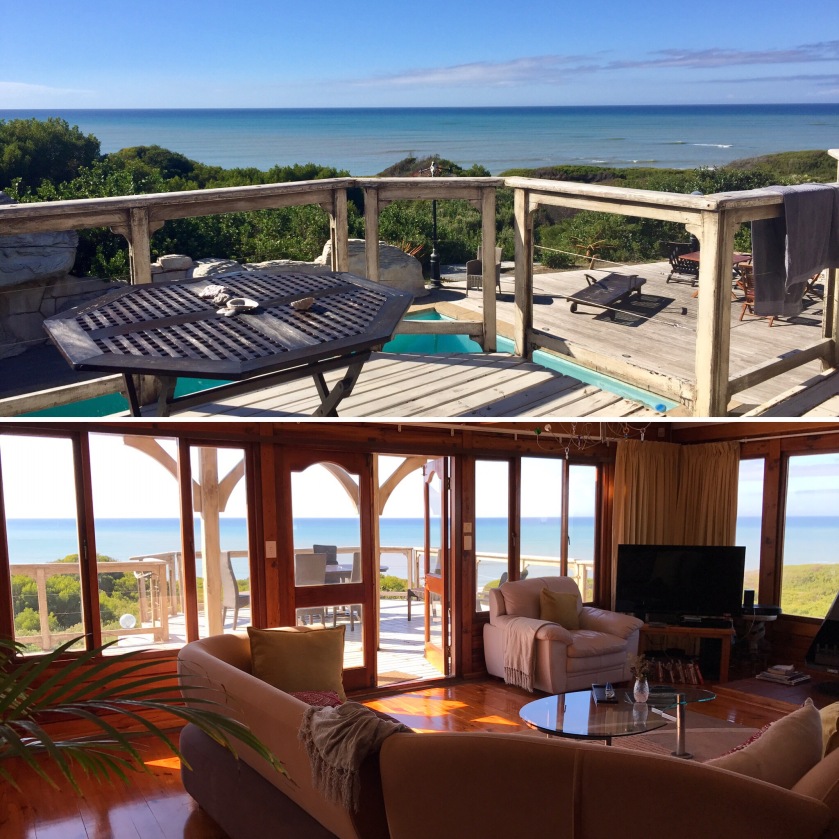 During the drive there, my first flamingos were spotted 😁

They’re actually super weird… which I pretty much knew, but seeing their spindly long legs work in real life brought it more into perspective😋

‘InFood – Coffee Society’ was where we sat down for a drink and bite to eat and though it was one of the cooler ‘looking’ dishes and drink serving, it was probably the one of the least tasty 😬 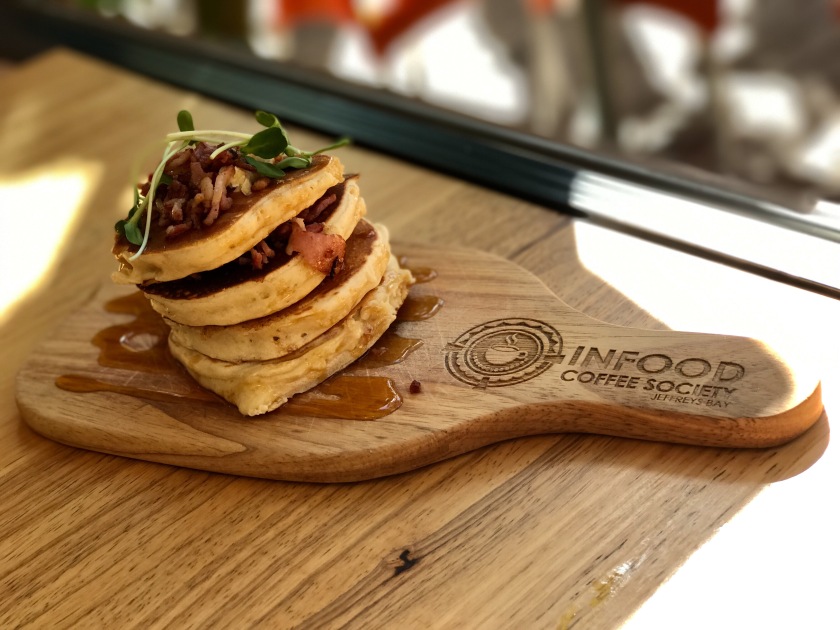 It was a nice sunny spot though and we enjoyed the weather from our table beside the window.
I was also able to get a blog posted so it worked out well.

The town was home to one of the biggest surfing competitions in South Africa, hosted by Billabong.
Thus, there was a large Billabong factory outlet that we took our time looking through.

Then our drive to port Elizabeth began.
I really wanted a South Africa hoodie so we searched for some tourist shops but found none😔

We needed a bite to eat before flying so we headed to ‘Bocadillos Bakery and Cafe’, suggested to us by Craig… as many of our stops were😉

I got a delicious apple, pineapple and mint juice and after having a few different fresh pressed juices during our trip, I’m totally hooked and a juicer may be my first real purchase in Sask😜
This coming from a ‘not really into fruit and veggies’ eater 😏

Mike and I shared a Thai chicken wrap, it was tasty and filled the void sufficiently 👌🏻

We had to be at the airport by 4:00 to drop off the rental/check in etc. and then we were up in the air and off by 6:00 ish.
It was a short flight, about 1 hour but they served us a small meal and drink surprisingly.
The pilot said we’d be landing in ten minutes and the flight attendants widened their eyes and rushed to gather the garbage.

We had begun decent when suddenly the plane shot up, as though it was taking off again.
Either we had approached from the wrong way or another plane had begun landing, not sure which but it wasn’t the most pleasant moment or two 😏

After circling back and safely landing we gathered our bags and picked up another car. It was identical to our previous one, so it hardly felt like we’d actually flown anywhere😜

We drove to ‘Aerotropolis Guest Lodge’, where we were led to our room for the night and It was super nice.

Clean and fresh feeling, bright and very nicely decorated in a modern African style.
It feels so nice when you can feel fully comfortable in a hotel setting 😁

We ate a hotel breakfast of fried eggs, bacon and toast and then we decided to head out and do some shopping at, ‘The Mall Of Africa’ before checking into our next place.

Lucky for me, Mike knew of a girl who knew where to look for skirts 😎
She was a dear and quickly hand wrote a note and texted it to us, detailing what stores had what, even highlighting which had high or low prices, better quality etc. 😄

I found a couple skirts but if I’d wanted to take the time, I could have found a whole lot more since they had the selection but we were short on time, luggage space and possibly clothing money 😜

We were at our house with a private pool by noon or so, looking forward to using the pool in the +30 weather.
Alas, the pool wasn’t to be used.
It wasn’t very clean at all and inside the house, though spacious and decently clean, the rug was stained throughout and as I was thinking that at least the bathroom was newly redone and clean, clumps of short hair were found on my feet 😩
We were sad we hadn’t been able to stay at  the Aerotropolis Guest Lodge again.
But the sunshine was lovely and I had time to enjoy it by sitting and reading a book (after wiping off the lawn chairs).

Mike went to a nearby kabab place to get us some late lunch.

A stuffed pita with all the extras, overflowed on our plates and it was a nice change from what we’d been having 🍽👌🏻

After the sun left our yard, I went in and sorted through my sea shells. 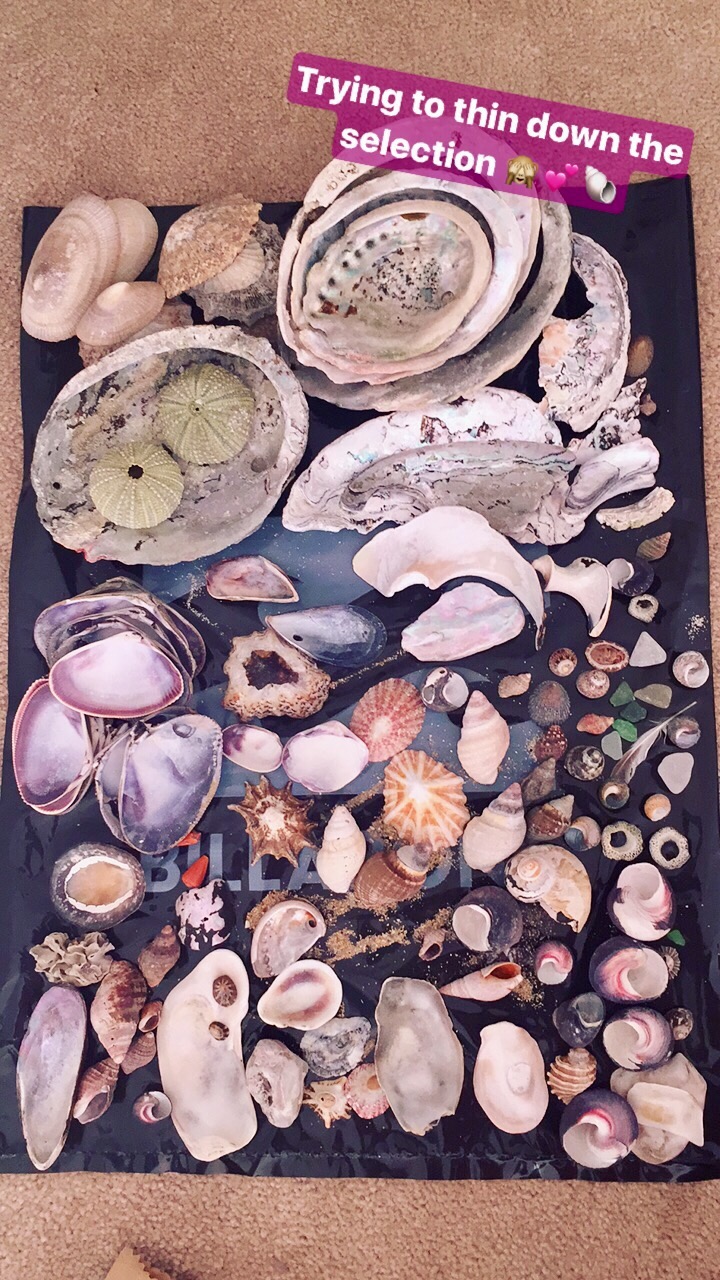 Thinking I’d narrow down the collection a little.
I threw out like, two broken ones 😏😬😜

Then it was time for a little lettering, writing and blogging to finish off the evening.

A cricket in the ceiling ‘lulled’ us to sleep 🙄