We spent Friday night in Prince Albert.
Mike went to round up some breakfast, since the dumb complimentary only went till 9

Seriously, who gets up at 9 a.m. on a Saturday to eat hotel food ?!
Anyways, ate a combo of A&W and Timmies and then headed to the hospital to see little Spencer and his parents ( A.K.A  my bro and Becca.)
Held the goober for a minute and then headed to the house to surprise mom and dad.
They had wanted us to stay and hang out on Saturday with the family that was out and I had thought we shouldn’t.
That is until morning of the wedding and I decided I did indeed want to be with them all as much as possible 😉

Thanks for changing the hotel Hun! (While trying to figure out how to get your wedding suit that was left in MacDowall to Kinistino no less.)

Got to the house and walked in the patio.. they didn’t seem to shocked but oh well 😛
Got to hang out, pack for Costa Rica a little less stressfully then night before wedding packing was and eat nummy cheesecakes etc.

Josh and Pro took us to the hotel in Saskatoon.
(Thanks again! Though I think you maybe just wanted time away from your two twerps and used us as an excuse ? 😉 )
The new truck speakers work nicely darling parents 😉 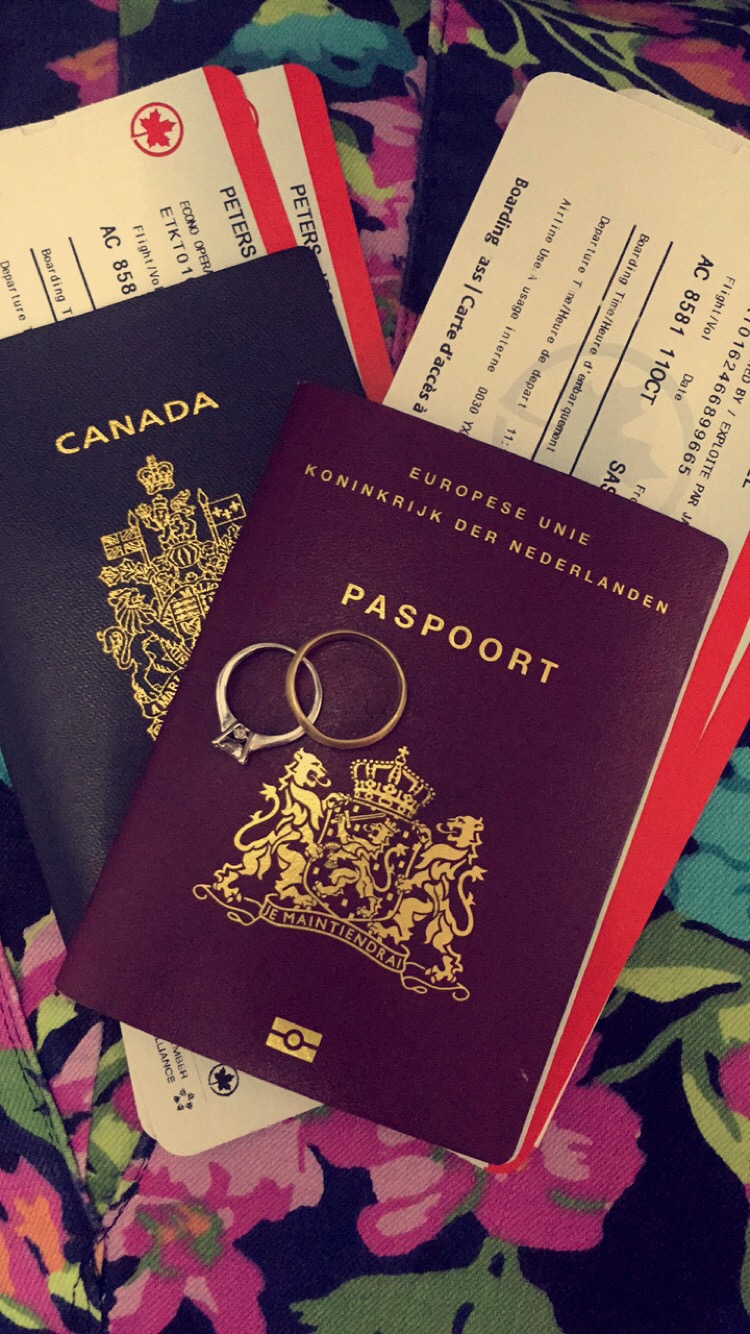 Sunday morning came bright and early.. but not early enough!
We ordered a wake up call and I set my alarm.
Neither option happened. 4:30 was the time we had to leave.. We woke up at 6:30..
But the Lord knows best!
Had we woken up at the correct time we would have been in the airport for no reason for over 5 hours.
Got to the airport and we couldn’t even print our tickets due to United airlines completely messing up our flight reservations.
We waited on hold and on the phone for almost three hours, talking to four different people.
Finally got the tickets…but original arrival was October 11th at 6:30 p.m. and now it was now for October 12th at 12 p.m.
We flew and survived the 8 hour delays in both Calgary and Houston. 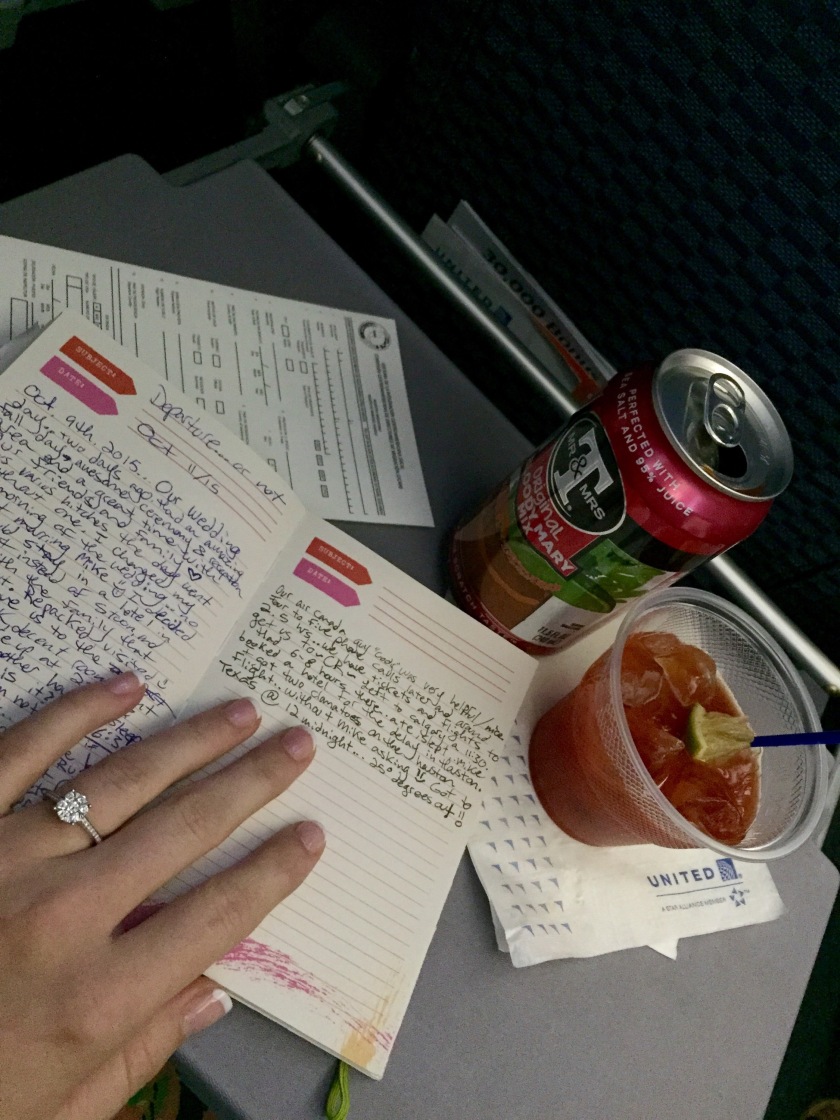 My traditional Clamato/bloody marry helped.. especially since the stewardess gave me two instead of one, without me even having to ask;)

We got a cheap hotel for Houston and that was a good thing.
Seats in airports can only be comfy for so long.

We woke up on time 😉
And Costa Rica was in view by 11:30.
Got the bag and changed the money over to “Colones,” picked up the rental car and headed off to find Tino!
We drove out of San Jose and drove to the ferry to take us to Paquera. 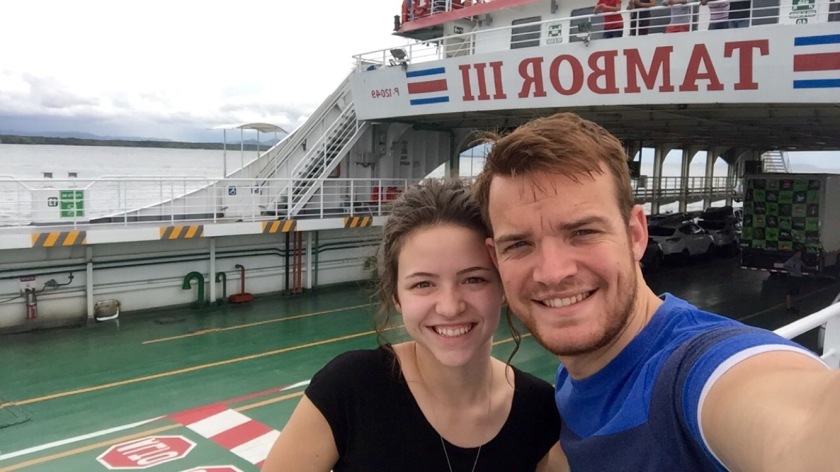 It was an hour-long, relaxed ride across the bay.

Driving on pavement not something i’ll take for granted anymore.
Once the pave ends here, the pot holes, ruts, gravel and swerving begin…and do not end.
I slept during the paved part.. Than Mike woke me up, asked me to take a look on the map.So being the good wifey I am, I did 😉 … but within a few seconds, (supposedly) I was back asleep and the map dropped to the car floor. I was really tired 😛

Stopped in Cabana to get groceries and then headed toward Mal Pais, to meet Tino at the bakery.
Since you are wondering by now who that is, Tino is the Villa Katino owner. He had to guide us up the path to the villa.
Trust me, we needed the guide.
He said “Most don’t like the drive the first time, but after a couple they like and it is a fun adventure. Turn right next, adventure begins now!”
And so does clenched fists and slight whiplash.
My words not his.

It was almost fully dark when we got to the villa but there was enough light go for a quick evening swim in the pool and know morning would bring some wonderful things for the eyes to behold.

One thought on “Departure.. or not”