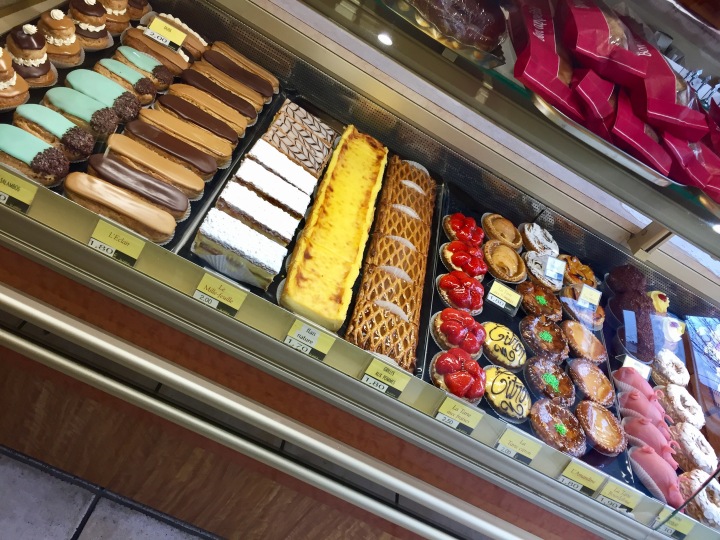 Seagulls.
They started to dive at us, coming way to close and squawking in guttural tones 😝
Mike was a help at shooing them away until we finished, but the French seagulls aren’t the friendly type 😏

Up into the town we went, climbing 28 floors worth of stairs by the end of it, according to my phones tracker😜

We walked through church areas, the grand guest hall, the monks monastery, many little corridors and rooms, many stairs, outer walls with lookouts, rooftops with views of ocean surroundings and we were filled with awe at the creation of the island village constructed one building upon another, beginning in the year 708. 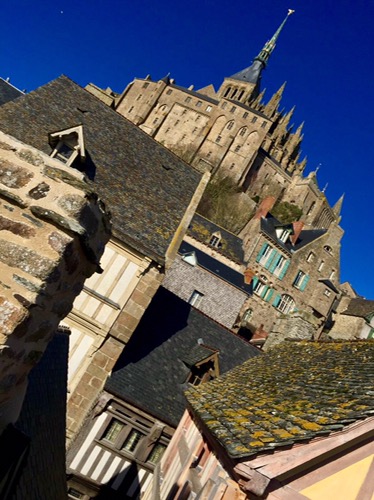 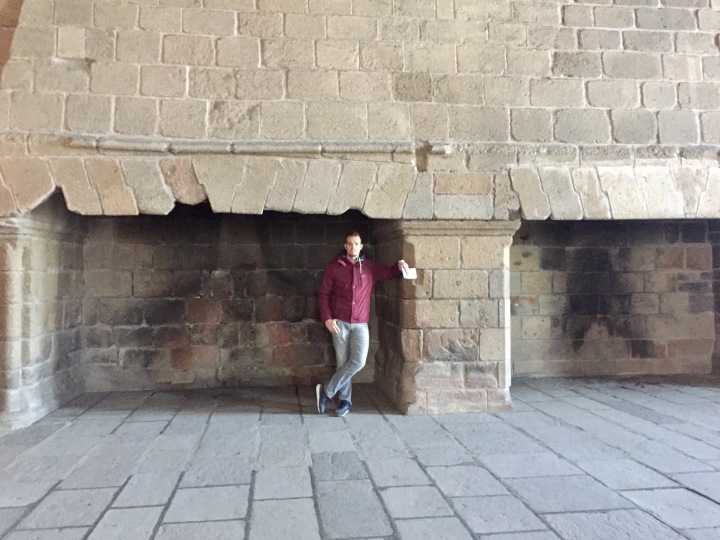 A walk through wouldn’t be complete without a stop at the gift shop, so we went there to look through the goodies 😊

As we twirled the postcard rack, I somehow knocked a holder off.
Thankfully the cards stayed in place… Zoe wasn’t so lucky 😆
I knocked off a clippy part, she knocked down the whole holder.
Causing postcards to rain down on the floor 😜

Mike was not placed with the two most graceful ladies to road trip with, and he made it apparent with his head shakes of disbelief/disapproval fairly often 🙈😜

We began the walk back to the parking lot, but not before some beach scavenging.

Not many were found 😔

We left Mont St Michel, happy with our main reason for road tripping.

McDonald’s served as a food source once again and then I don’t know what happened after that because I fell asleep.
Until Mike woke me in Houlgate to check out a different beach in case it was a better shell source.

I wasn’t hoping for much… but how wrong I was😳

Never in my life, have a seen so, many, shells.

I was so overwhelmed that I wasn’t even picking any up, I was just sitting there amidst thousands of shells, not knowing what to do with myself 😅🐚💕

We couldn’t even walk over the beach without stepping on and crushing shells, it felt awful because when is it ever ok to break pretty things? If the sound of it had to have a name?

That is how broken dreams would sound 💔

One quick stop at a lookout above the town and then we journeyed on a couple more hours until we stopped for supper in Neuchâtel En Bray.

Mike found a little restaurant with decent reviews and we looked forward to a nice meal.
This time though, trip advisor let us down 😜

The bottom level of the basement/hotel was reserved, so they lead us up some dark stairs, into another little bedroom – turned dining room and sat us up there all alone, in the silent… bedroom 😬😜

One starter was a crusted and baked potato dish which was tasty, the rest were salads, with very spicy mustard vinaigrette 😬

The mains weren’t anything to write home about either, unless you write about disgusting things.

My beef stew was ok, Mikes chicken was covered in an odd tasting sauce, and Zoe’s smelt like manure and tasted like it too 💩

No joke… it was some kind of a meat mix with onions, stuffed in a sausage like casing and covered in a sauce but we have no idea what kind of meat and frankly, we are a little worried about what it could have been 😬

So in the end the food, mixed with the atmosphere made for a better story then meal😏

Michiel drove us back to Amiens where we then spent the night.

We all slept in, taking our morning slowly and leisurely 👌🏻☕️

Dropping our suitcases at the car, we went past the bakery I had gotten the delicious meringue at but alas, it was closed 😔

We walked on and got to a restaurant just in time for lunch.
We again didn’t know what was what really and our waitress again couldn’t speak English 😏
Zoe and I went for the safety of the one word on the menu we could make out, ‘chicken’.
Mike ordered a burger and our chicken was actually a chicken quiche.

All of our meals were tasty and it was a relief😁

One more pass by the cathedral before we left and then the next memorable stop was in Belgium where we got what else?

On we drove through the countryside.
The hours seeming longer and longer… three days is max road trip time for me I think 😜

We got to a point of land where Belgium, Germany and Holland intersect.

Back down we went.

Quickly looking at the land mark and each standing on a different country at once before heading off, more the ready to be back at the apartment.

Lack of fresh air, muscles being displeased at being in the same seat for hours, boredom etc made up the rest of the journey back.

Which ended with an almost near mishap as Zoe and I exited the car and our legs rebelled at the number of stairs taken throughout the day followed by zero movement in the car.
Creating an interesting combination once we tried to get out of the vehicle 😜

Sorry about the picture quality 😬

We traveled 1,754 km in three days, not counting any side routes or extra scenic detours 😏

Special thanks to our fairly patient, slightly loud but ever knowledgeable driver/travel agent 😉💕