The first day at the cabin always seems like a bit of a ‘settling into the cabin life groove’ day and not a whole lot transpires.

I read a book and then eggs were boiled and open faced sandwiches made as a snack to tide us all over until an early supper of fish could be fried up by Dad.

Since the early supper was far away, a nap was taken to shorten the wait 😜

The guys had worked almost all day on putting up a booster to see if cell service could be received at the cabin.
It took much of their time and efforts but finally, later that evening, when all were out on the lake but me, it began working and strong service was acquired 😜

It only works when the generator is running but they want it for safety reasons and so they can easily message ones at home rather than having to boat over to the camp.
The hit and miss signal wasn’t proving impressive though. 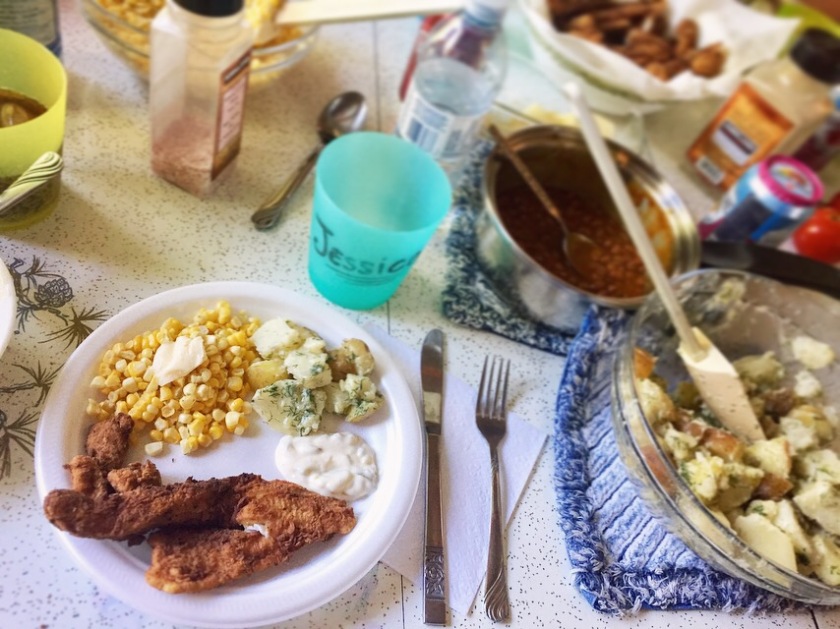 Dad, Mike, Pro, Bryn and I all headed out fishing late that morning.

I didn’t, for I only caught one jack and after many slow passes over the area, eventually a total of five pickerel were caught and released but that was pretty sad compared to the previous day’s catches 🐟

I read away most of the afternoon and then after sitting in the sun for a little bit, observing the squirrels and chipmunks, nap time ensued😴

When I awoke, the mother and sister were just finishing jogging and I felt like it wasn’t a pleasurable thing to do, but necessary, after the extortionate amount of cookies I’d been devouring 😜

I hardly rasped out 2km and felt disgusted within and without, rinsing off down at the lake before sitting down to a supper of burgers and salad 😎

Mike and I went down to the lake to sit and read a little in the hot, calm evening and then after the rock got too hard to sit on any longer, we went back up and I joined Pro in painting 🎨

Mike was a little bored and Mom suddenly remembered she had a few carving tools and wood that she’d previously thought Mike may like trying, so out he went to sit on the step and try to create his very own little house 😉

It was movie night and so snacks were gathered and all sat down to begin watching what turned out to be a very long, very lame movie 🙈
The plot was ultra confusing, the music choices awful (think harp sounds and jingly bits) and overall it was just an odd, major waste of time but we were at the cabin and had nothing to occupy us anyways so if anything, we will always remember that terribly explained, long movie we watched together 😜

Coffee and cookies, the same routine as the previous 2 mornings 👌🏻☕️🍪

Eggs were fried up for everyone and then the heat of the day fell upon the land.

It had been lovely weather since our arrival and I decided it would be a shame to waste it inside the cabin.
I went out and drew a little while Mike worked on his whittling 😉 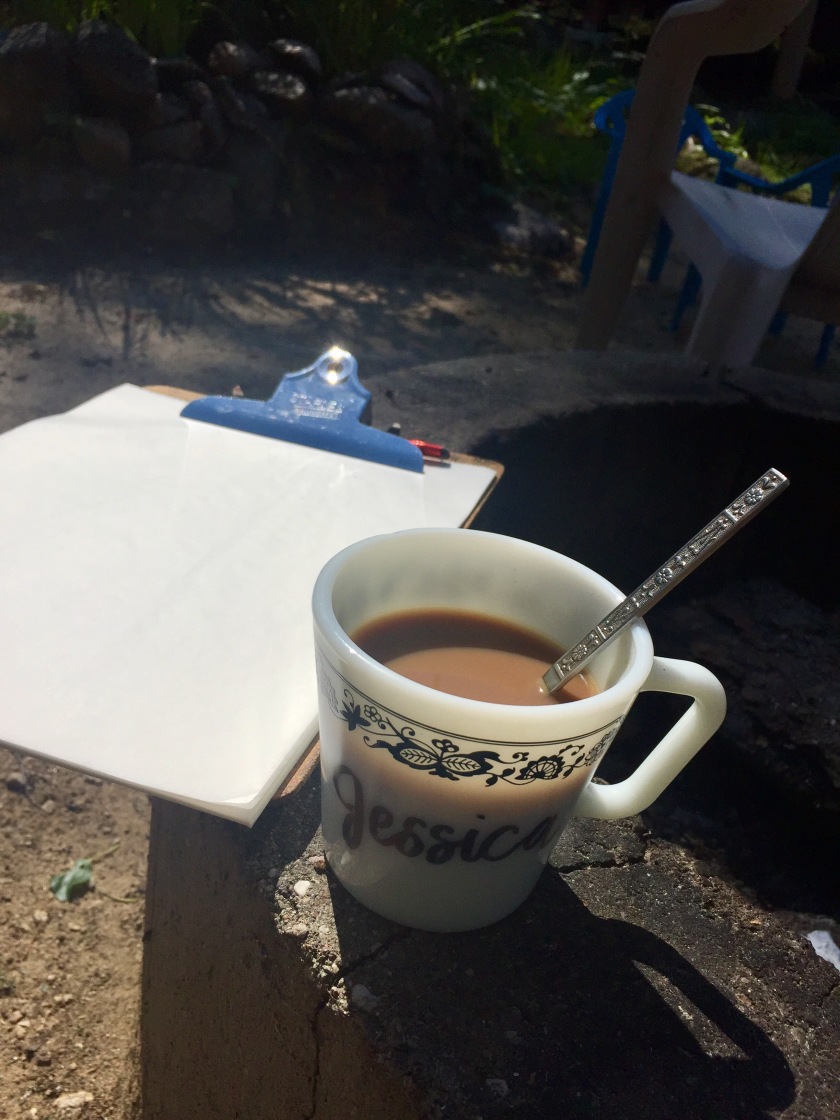 A grass baby was made for Bryn and the grands and eldest grand baby went kayaking.

After all had regrouped in the main cabin once again, a slight case of cabin fever took hold.

It started with Bob repeating a lame joke Al had told everyone, ‘Why did the cookie go to the doctor? Cause he was feeling crumby’ 🙄😜

It was said pathetically enough that a few ‘ha’s’ were let out and then Dad asked his own made up question of, ‘Why did the potato go to the doctor?’
I said, ‘Because he had too many eyes, Pro suggested that perhaps ‘He was feeling starchy,’ and then Dad answered that ‘No, he wasn’t peeling good’ 😜

By that point, we were all laughing a little too hard, at the puny-ness and then I asked ‘Why the bread went to the doctor?’ and it was because ‘He just couldn’t rise.’

Pro then quickly asked why the mushroom went to the doctor and there was an awkward lapse in the laughing and the room was silent… until her and I said at the same time that ‘He had fungus!’

😂 I know those are all lame and I’m almost embarrassed to be repeating them on here, but if anyone else has ever experienced the tricks four cabin walls play on one’s mind, you’ll know how entertaining those child like ‘jokes’ were 😜

Once joke hour had come to an end, the three of us older girls went out for some exercise.
Speed walking up and down the trail and pausing after each lap to complete some other moves before repeating, trying, perhaps in vain, to work off the fried fish meals, cookie breakfasts, puffed wheat desserts etc.

Pro then went out to scavenge for the scarce blueberries that were sparsely spread throughout the area and I went out to help.
The only motivation for picking the baby sized berries was the telling of delicious, buttery, blueberry dessert bush pies, sprinkled with icing sugar, which Mom had mentioned making on a previous trip 😍

Depending who arose when, the morning fishing crew would be gone out and the last to rise left to sit out the morning with instant coffees in hand.

There was reading and napping and sitting outside and in.
Snacks and fishing and dish doing, meandering about, not much done and yet little bits taken care of.

Life at the cabin.

”Twas a fish fry for supper again and this time, Dad and I got to enjoy some canned potatoes he had brought up 😎
An odd delicacy perhaps…but delicious in our minds 😜
The others got leftover BBQ’d potatoes and a salad and toppings were prepared and the fried fishies brought in.

(Mikes few whittling tools had dulled or been broken, so his wood carving career was soon over😬)

A guy Dad knows came over to see the cabin and talk wood with him which means they came and sat down inside, talking wood and bears, water levels and all other lake life subjects 😏🏡
Once he’d departed, Mike barbecued some chicken fingers and moose sausage up for lunch 👌🏻

The sister and I painted a bit and heard interesting sounds coming from the lake, where the others were.
Turns out, Mike had fallen out of the kayak as he attempted exiting it 😜

He left, lake drenched, with Dad, as they had to go pick up the latest arriving members, the bro and bro in law 😏

All gathered outside for supper, where a ham, potatoes and green beans had all been cooked over the fire by Mother and fire builder Bob 😎

It was a delicious meal, mostly enjoyed, besides a cheap lawn chair collapse, which deposited Dad on the ground and also the dragging of little feet through the chalky sand which surrounds the fire, a movement utterly disgusts us older girls 🔥🍴😝

The three bro’s of various descents went out fishing in the finally cooling off eve and the sister made some blueberry bush pies. 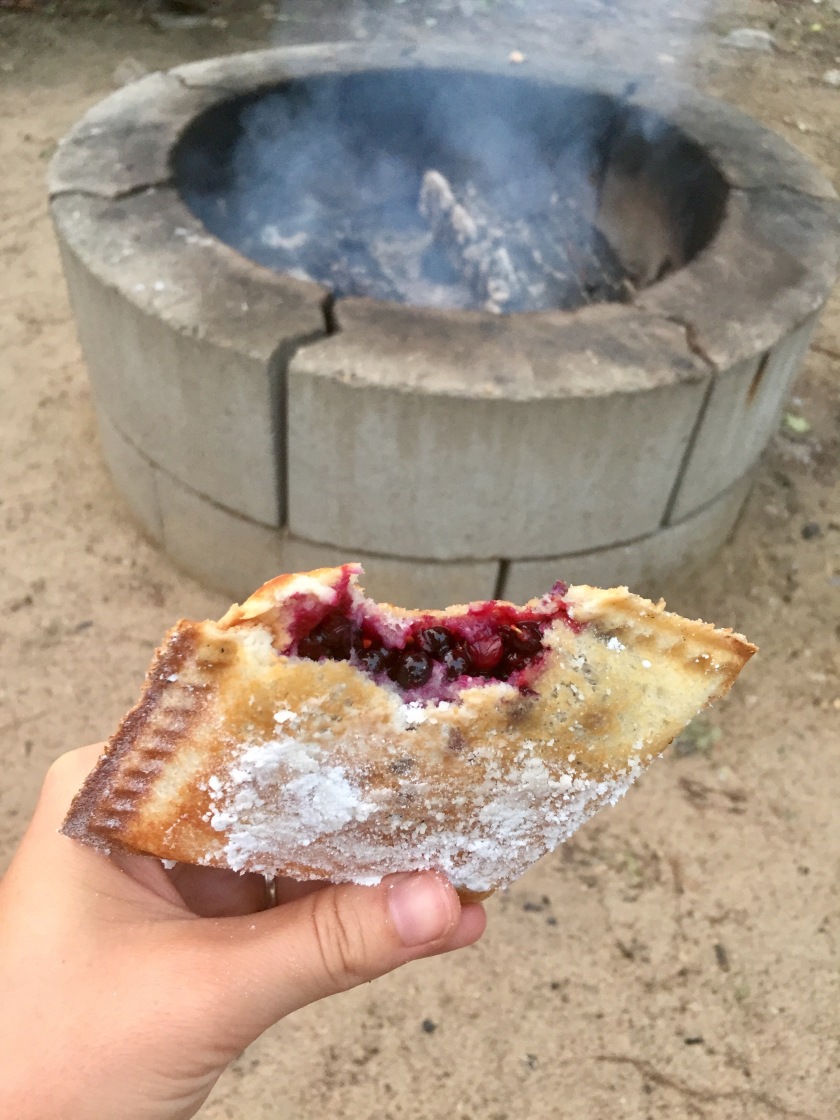 Blueberry juice dripping, berries falling out all over and icing sugar being inhaled wrong, causing a coughing fit 😜

They were good though ☺️

(The hubsters view while fishing 👌🏻)

The sister got out the painting stuff and so I joined her, coming up with a design I liked and continuing to do it over and over, about four times, never being pleased with the result, liking one different aspect from each piece
😬🙄

The boys had went out to get the necessities for lunch and so once they returned preparations began.

Fried fish, fried potato slices, beans and even some garden cucumbers from the sister-in-law, who was unable to join us, but still in our thoughts 😉

Since oil was left over and it was too hot and late in the day to make donuts, Pro and I thought perhaps cake batter would fry up kind of similarly to funnel cake.

Mike offered to take over so I let him. Dad also went out to help with the process.
I stood ready to take a picture of the hopefully golden brown and delicious outcome 😍

It couldn’t have been less the case 😂

The first little stringy bits of dough greatly resembled cat throw up and the larger ones looked like some kind of bodily insides and or…turds. 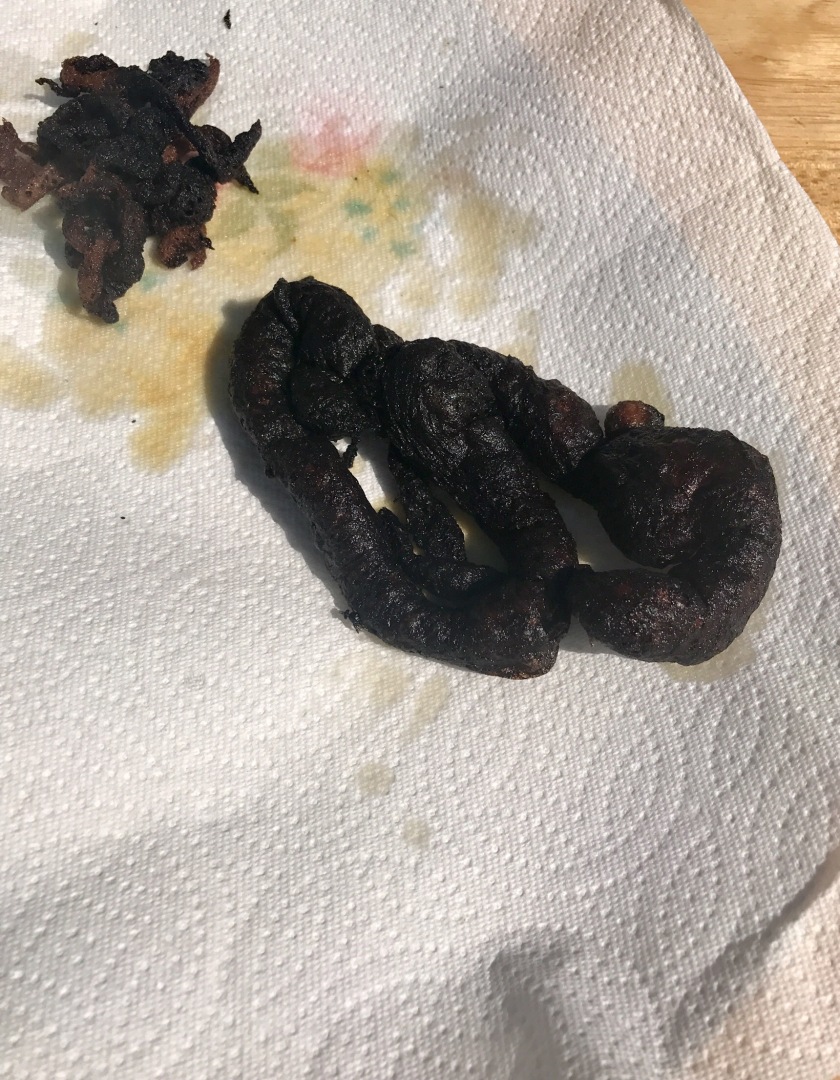 It was the most repulsive dessert… maybe even food in general, I have ever seen 😂

Dad and Mike weren’t detoured though and they stayed out, attempting to pour cake batter into the bush pie makers and a large frying pan😜 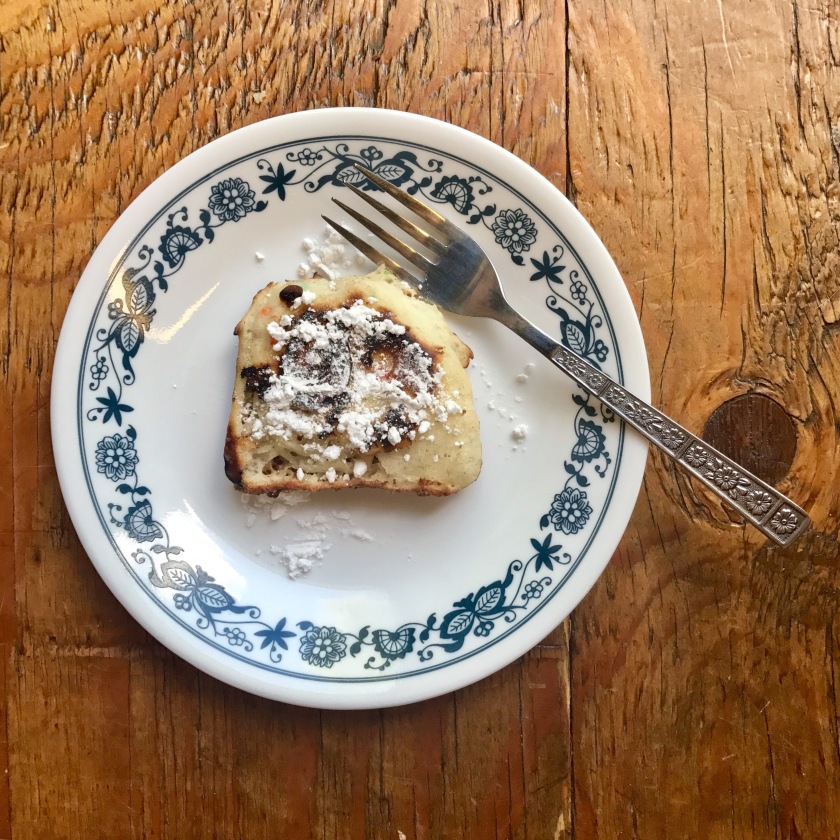 It was in the +30’s so a trip to the beach was called for, this time with the tube being pulled behind as well.

That tuckered us all out so we returned to the cabin, mocha’s and a meal quickly made to get the post swim hunger under control and then it was more painting and what ever else until movie time hit and snacks came out 😏

Once that was over, we tucked in for our last night at the cabin 😴.

Here you see the loo far left, the Shauna middle and the main cabin right edge.

And what was once ‘the girls cabin’… until the sis up and married and now it is the guest cabin.

One thought on “Lake Life Retold”